The Violence Against Women Act has been the latest intersection between the “war against women” and the “culture war” against the gay community. Republicans threatened to hold up renewal of the bill, which helps provide funding to support women experiencing domestic violence, because for the first time it included language that explicitly provided protections for LGBT people and undocumented immigrants. As of two weeks ago, it seemed as if their efforts might succeed in stripping the bill of its LGBT accommodations. 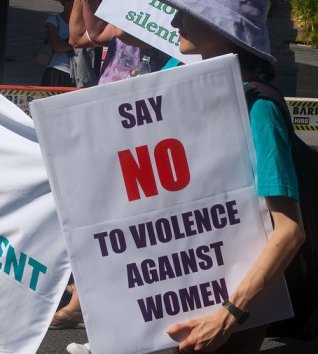 On Wednesday, the House of Representatives passed a version of VAWA that doesn’t include the protections for LGBT people, undocumented immigrants, Native Americans, or people living in subsidized housing by 17 votes. One representative, Republican Judy Biggert, attempted to add an amendment that would increase protections for LGBT survivors, but was blocked from introducing the amendment by “House leadership.” The House, which is majority Republican, is of the opinion that special protections for marginalized groups aren’t necessary, even when those marginalized groups have been proven to have restricted access to the resources and support that white straight cis people do, and often experience discrimination even when they can access those resources. According to the Republican majority, this isn’t an issue because “the bill is gender-neutral and covers all people.” Much like how the Declaration of Independence  says that “all men are created equal” and this has resolved all issues of racism, classism, sexism, cissexism, ableism, and homophobia.

Although it may appear that the Republicans have won their power play and have managed to use the threat of denying women access to resources they need to survive dangerous situations to keep LGBT people and other marginalized peoples from having the same thing, there’s this: on Tuesday, in the event that the House did in fact pass a final version of the bill that didn’t include LGBT protections, the White House threatened to veto it. The White House has issued a Statement of Administration Policy which says that the version of VAWA favored by the House “fails to include language that would prohibit discrimination against LGBT victims in VAWA grant programs,” and also that it fails to provide adequate protections for undocumented immigrants and individuals living in subsidized housing. The White House hasn’t committed to a veto, but announced that if the House proceeded with its version of the bill (which it did), “White House advisors would recommend that President Obama veto the bill.”

The veto isn’t definite, and it’s arguable whether it’s the most effective way to address the Right’s outlandish refusal to recognize even basic human rights of safety and physical security for communities that it considers inferior. But while Obama was careful not to make any legislative commitments to the gay community when he announced his support for same-sex marriage, this move from the White House may lend some weight to his statement of solidarity. Domestic violence affects same-sex couples at roughly the same rate it does straight couples, regardless of their legal right to marry, and the Violence Against Women Act could become a way in which they could at least have roughly equal recourse. The future of the bill is uncertain; really the only thing that seems definite is that the Republican majority seems committed to fighting tooth and nail to make sure we’re as vulnerable and undersupported a community as possible. But the future holds possibilities for new allies for us as well — maybe even in the White House.