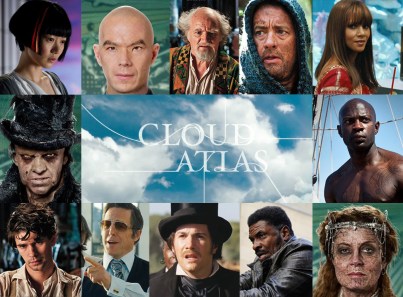 by riese & julie and brandy

Well, it’s been a number of months since Julie & Brandy last blessed us with their spunky and irreverent take on a popular film of their choosing, and although we busy ourselves re-watching The Girl With The Dragon Tattoo & Fries and Hhenger Gahms, it’s still difficult to get through everyday life without a new episode from which to steal and repeat jokes. Therefore I am simply overjoyed to announce a brilliantly fresh episode of Julie & Brandy In Your Box Office is about to premiere right in front of your eyeballs!

Julie Goldman and Brandy Howard were scouring the earth for a new film that’d be appropriate for their comedy stylings when they came across this speech by transgender director Lana Wachowski on this very website and thought, “Oooo! Let’s support this movie!” and dutifully trekked to the theater at the asscrack of dawn. Unfortunately they learned, as Julie put it, “good people make bad movies.” On another note, my mother saw Cloud Atlas on her birthday and loved it, so.

So, get a giant box of Junior Mints, take off your socks, curl into a small ball on your couch and press “play.” And if you’d like to read more about the race-related issues people have with this movie that Julie and Brandy bring up in their video, I recommend Yo, Is That Racist? Race-Bending Your Way Around Cloud Atlas and Media Action Network For Asian-Americans Speaks Up Against Cloud Atlas.

Also (this is the last thing, I promise), even though everybody hates the new Final Cut, I really like it! It’s enabled me to post this video in HD so I encourage you to select 720 HD quality when watching this fantastic video!