Last Saturday the Human Rights Campaign held its annual fundraising gala in San Francisco, and presented this year’s Visibility Award to transgender director Lana Wachowski. Lana, who co-directed the Matrix trilogy with her brother Andy and whose latest film, Cloud Atlas, is in theaters this Friday, gave a heartfelt acceptance speech in which she touched on her childhood as a closeted and confused trans girl, her struggles with suicide, and her life as a transgender person in the public spotlight. 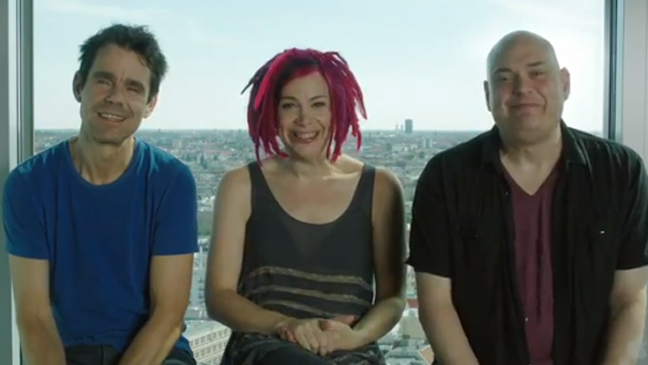 Lana’s gender isn’t exactly breaking news —  I remember reading about her before coming out and beginning my own transition back in early 2011. She’s been out to her friends and family for more than a decade, and started presenting as female years ago. However, she only recently began speaking publicly about her transition. She elaborated on her motivations in her HRC acceptance speech:

“Andy and I have not done press or made a public appearance including premieres in over 12 years. People have mistakenly assumed that this has something to do with my gender. It does not. After The Matrix was released in ‘99 we both experienced this alarming contraction of our world and thus our lives. We became acutely aware of the preciousness of anonymity — understanding it as a form of virginity, something you only lose once. Anonymity allows you access to civic space, to a form of participation in public life, to an egalitarian invisibility that neither of us wanted to give up.”

When Lana decided to publicly promote her new film Cloud Atlas earlier this year, she knew that the subject of her transition would be unavoidable:

“All of us are conscious of the fact that not only will it be Andy and my first public appearance in a long time, but it will also be the first time that I speak publicly since my transition. Parenthetically this is a word that has very complicated subject for me because of its complicity in a binary gender narrative that I am not particularly comfortable with. Yet I realize the moment I go on camera, that act will be subject to projections that are both personal and political…I knew I was going to come out but I knew when I finally did come out I didn’t want it to be about my coming out. I am completely horrified by the “talk show,” the interrogation and confession format, the weeping, the tears of the host whose sympathy underscores the inherent tragedy of my life as a transgender person. And this moment fulfilling the cathartic arc of rejection to acceptance without ever interrogating the pathology of a society that refuses to acknowledge the spectrum of gender in the exact same blind way they have refused to see a spectrum of race or sexuality.”

As a trans girl, many of the words Lana used to describe her childhood resonated with me — her feelings of confusion and self-loathing, of being forcibly socialized as the boy she knew she wasn’t:

“Early on I am told to get in line after a morning bell, girls in one line, boys in another. I walk past the girls feeling this strange, powerful gravity of association. Yet some part of me knows I have to keep walking. As soon as I look towards the other line, though, I feel a feeling of differentiation that confuses me. I don’t belong there, either.”

Her feelings of helplessness at the onset of a puberty she didn’t want gave me chills, because I’ll never forget what it was like to watch my own body change in ways that felt alien and wrong:

“As I grew older an intense anxious isolation coupled with constant insomnia began to inculcate an inescapable depression…I watched many of my male friends start to develop facial hair, I kept this strange relentless vigil staring in the mirror for hours, afraid of what one day I might see. Here in the absence of words to defend myself, without examples, without models, I began to believe voices in my head — that I was a freak, that I am broken, that there is something wrong with me, that I will never be lovable.” 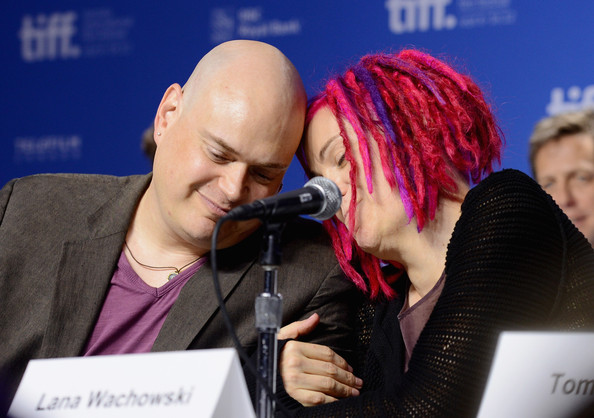 Formerly known as the “Wachowski Brothers”, Lana and Andy now introduce themselves as “Wachowski Starship”

Lana also described her failed suicide attempt as a teenager, and the random stranger who prevented her from throwing herself in front of an oncoming train:

“I was very used to traveling home quite late because of the theater, I know the train platform will be empty at night because it always is…I try not to think of anything but jumping as the train comes. Just as the platform begins to rumble suddenly I notice someone walking down the ramp. It is a skinny older old man wearing overly large, 1970s square-style glasses that remind of the ones my grandma wears. He stares at me the way animals stare at each other. I don’t know why he wouldn’t look away. All I know is that because he didn’t, I am still here.”

Lana’s acceptance speech ended on a positive and hopeful note- an acknowledgement of her role in the ongoing struggle for trans* visibility and equality, and the impact her going public will have on a generation of children whose gender doesn’t match the sex they were assigned at birth:

“Years later I find the courage to admit that I am transgender and this doesn’t mean that I am unlovable. I meet a woman, the first person that has made me understand that they love me not in spite of my difference but because of it. She is the first person to see me as a whole being. And every morning I get to wake up beside her I can’t begin to tell you how grateful I am for those two blue eyes in my life.

I am here because when I was young, I wanted very badly to be a writer, I wanted to be a filmmaker, but I couldn’t find anyone like me in the world and it felt like my dreams were foreclosed simply because my gender was less typical than others. If I can be that person for someone else then the sacrifice of my private civic life may have value. I know I am also here because of the strength and courage and love that I am blessed to receive from my wife, my family and my friends. And in this way I hope to offer their love in the form of my materiality to a project like this one started by the HRC, so that this world that we imagine in this room might be used to gain access to other rooms, to other worlds previously unimaginable.”

Lana, from one trans woman to another: congrats on being you and thank you for sharing your touching story with the world.

You can watch the full clip of Lana Wachowski’s HRC acceptance speech below: