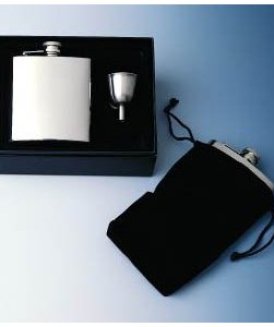 The renamed flask from Urban Outfitters.

Urban Outfitters has overnight renamed all its “Navajo” products following ongoing criticism for cultural appropriation and a trademark violations.

As of Monday, Urban Outfitters used the word “Navajo” in 20 or so product names, the two most notorious of which included the “Navajo Hipster Panty” and what the Globe and Mail calls the “impossibly ill-advised” “Navajo Print Fabric Wrapped Flask,” as well as earrings, shoes, socks, dresses, and sweaters.

And now? They don’t. In many cases, the word “Navajo” has been replaced with “printed” or a variation thereof. Searching the site returns no results.

In June, the Navajo Nation attorney general send Urban Outfitters a cease-and-desist letter for trademark infringement (in addition to referring to a tribe, the Navajo Nation has 12 trademarks on the use of the word “Navajo,” including ones related to clothing and online retail). Part of that letter, as posted on Native Approrpiations, reads:

As recently as last Thursday, Ed Looram, a PR rep for Urban Outfitters, denied any contact with the Navajo Nation. He also argued that Native American-inspired items are currently common in fashion, and that the company had no plans to modify or discontinue any of the products in question. He also denied the existence of the cease-and–desist letter, writing: “As of this writing the Urban Outfitters brand has not been contacted by any representatives of the Navajo Nation.”

In an open letter to the CEO of Urban Outfitters on Racialicious last week that has been cited in a significant number of articles related to this story, Sasha Houston Brown argues that not only are the products offensive, they are illegal:

“As a Native American woman, I am deeply distressed by your company’s mass marketed collection of distasteful and racially demeaning apparel and décor. I take personal offense to the blatant racism and perverted cultural appropriation your store features this season as “fashion.”

All too often industries, sports teams and ignorant individuals legitimize racism under the guise of cultural “appreciation”. There is nothing honorable or historically appreciative in selling items such as the Navajo Print Fabric Wrapped Flask, Peace Treaty Feather Necklace, Staring at Stars Skull Native Headdress T-shirt or the Navajo Hipster Panty. These and the dozens of other tacky products you are currently selling referencing Native America make a mockery of our identity and unique cultures. […]

I stand in solidarity with the Navajo Nation and ask that you not only cease and desist selling products falsely using the Navajo name, but that you also stop selling faux Indian apparel that objectifies all tribes.”

Primarily concerned with overt cultural and religious appropriation, Brown (who also had an interesting interview on Q earlier this week) also discusses trademark infringement, perpetuating stereotypes, and the Federal Indian Arts and Crafts act of 1990, a truth-in-advertising law that prevents selling products in a way that suggests they were created by or associated with a particular Indian* person, Indian Tribe, or a related organization, unless the products in question actually are (Although the act only protects products that fall under the category of arts and crafts, the trademark infringement has the illegality of the “Navajo” product line covered). She also mentions the cease-and-desist letter.

“The Native American-inspired trend and specifically the term ‘Navajo’ have been cycling thru fashion, fine art and design for the last few years. We currently have no plans to modify or discontinue any product lines.”

In this response, the company seems to be saying three things: 1. we can’t be bothered to give you a proper response and so are releasing this barely-a-step-up-from-no-comment statement; 2. we’re just jumping on the bandwagon, so it’s not our fault; and 3. we also don’t know how to spell.

In an interview with Jezebel, Susan Scafidi, a professor at Fordhan University School of Law, said:

“It’s a long-standing issue, you know, and it’s not just in the fashion world. It’s the Jeep Cherokee. It’s the Washington Redskins. And there was enormous litigation over that trademark. It’s an issue when you have indigenous peoples in general or Native Americans in particular who have been subject to actual genocide, and then you come back around with what some people characterize as cultural genocide. The pillaging of land, the pillaging of personal property, followed by the pillaging of what could be considered intellectual property. It’s something that occurs against a background of a lot of other offensive actions.”

Since the name changes, the Navajo Nation Department of Justice released a statement saying that the product name changes, which were first reported in Indian Country Today, were positive and encouraging:

“The Urban Outfitters Corporation’s recent removal of the Navajo name from its online marketing and retailing are positive actions that are more consistent with the corporation’s responsibilities than previously demonstrated.

If the company has also ceased using the Navajo name in conjunction with its merchandise in its retail stores and print-media advertising, these are encouraging steps by the company towards amicably resolving this matter.”

In all trademark infringement cases, the sooner there is action against the infringer, the more effective the case is likely to be. The early action the Navajo Nation took against Urban Outfitters is commendable, and should have been enough to lead to renaming the products directly. Instead, Brown’s letter is equally commendable, as the resulting media firestorm seems to be the real reason the company actually took action.

*This is the term used in legal language in the United States, which is the only reason it is used here.