The Log Cabin Republicans and GOProud have always been at the center of some controversy; some say it’s indefensible and crazy to belong to a party that’s been responsible for so much of the legal discrimination we experience, some say that the only way to change the system is to be inside it, and some feel like your political party doesn’t have to have anything to do with your sexual orientation. The latest chapter in the story of queers and the Republican party, however, complicates all of those a little bit.

In Erie County, New York, over 250 GLBT voters have recently registered as members of the Erie County Conservative party, some switching party affiliations. The Conservative party strongly opposes same-sex marriage; the current Republican senator, Mark Grisanti, campaigned on his opposition to marriage equality. But now, the queer community of Erie County is trying to save him in re-election.

Even though Grisanti opposed same-sex marriage in his campaign, when New York’s marriage equality law came to a vote, Grisanti supported it, and voted for equality. Now he’s risked losing his base of support, and the Conservative vote, without which he may very well lose the next election. If he lost his seat, there’s a good chance he would be replaced by someone less supportive of the queer community. So queer activists are flooding the Conservative party, hoping that their votes can keep Grisanti in office.

For most gay Republican groups, other conservative values, like limited government and fiscal conservatism, are generally upheld even when the fact that their members are gay means that they’re often more socially liberal. But in Erie County, it feels like a clear-cut case of “if you can’t beat them, join them.”

“There’s an old phrase my dad used to use,” said Kitty Lambert-Rudd, a same-sex marriage activist. “If you can’t beat them, join them. And once you’re in, take them over and throw them out.” 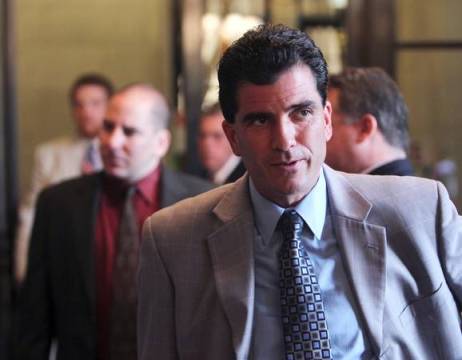 But it’s also a case study in what it can mean for politicians who stick their necks out to help the queer community, even going so far as to buck their own party: they win a lot of loyalty. It’s true that they might risk the support of their own party, but the people to whom their support actually makes a difference won’t forget. Threatening politicians who support gay issues with ruining their chances of re-election is a old trick that groups like NOM or Protect Marriage use all the time. If people are paying attention to what’s happening in Erie County, they’ll see that there’s also public sentiment in the opposite direction, working hard to protect people who have treated us fairly. If the Erie County queer voters do manage to keep Grisanti in office, or maybe even manage to create enough attention around their campaign, then perhaps other politicians will take note and begin to wake up to the political possibilities of supporting the queer community.

REPORTER: Would you call this payback for the Conservative Party?

LAMBERT: No. Not at all.

REPORTER: What would you call it?

LAMBERT: Wake up. Wake up. We have not bothered you. We simply have asked for equal representation under the existing law. And you’ve targeted senators that allowed us to be Americans and represented equally. Wake up.