I was born and raised in a very special place called the Rio Grande Valley, a region comprised of four counties in South South South Texas with a 90% Latino population. 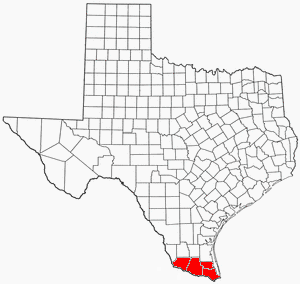 I have a love/hate relationship with this wonderful, weird place.

I grew up in a whole different world from the stereotypical Texas that people know — the one full of cowboy boots, barbecue and country music. (I mean, I grew up with that stuff too but it wasn’t as prevalent; it was more like carne asada and Tejano music.) The Valley has its own hybrid culture created by Tejanos, Mexican immigrants, and Mexican natives living together on the Texas-Mexico border. We have our own distinct dialect and various cultural markers, but most notably we eat some of the most interesting and innovative snacks in the world. 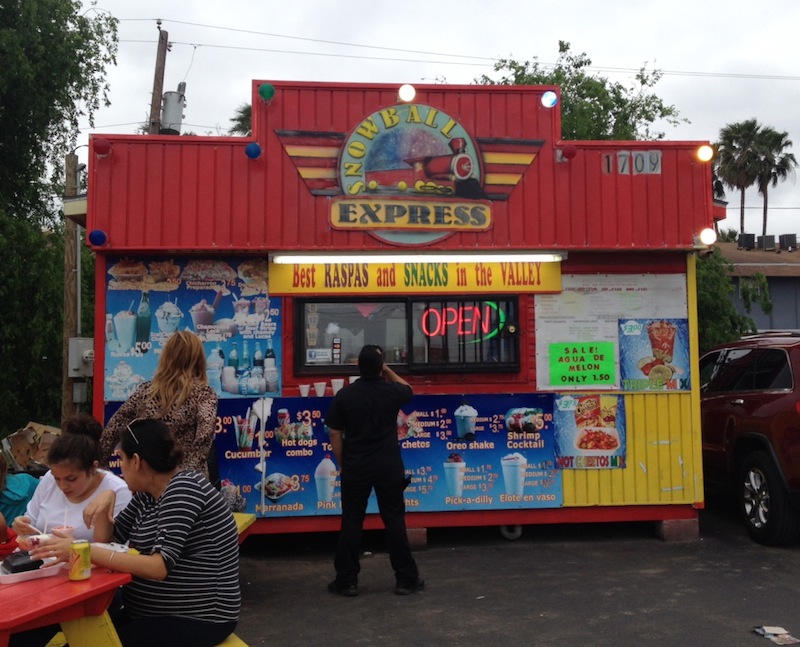 This is a typical “raspa stand” in the Valley. Shoutout to my brother for taking this picture.

Raspa stands or snack shacks — that carry all of this mouth-watering goodness I’m about to share with you and more — are ubiquitous in the Valley. (Pro tip: the shittier and smaller the place is, the better your snacks will be — same can be applied to tacos, just saying.) Some of these snacks were invented on the streets of Mexico and were carried over to the borderlands and some were maybe created in the Valley, who knows. These snacks are certainly not just tied to the Valley; I’m sure you can find any variation of them as far north as San Antonio or anywhere there is a Mexican/Mexican-American community. What I can say for certain is that I grew up with these tasty things and I thought they were normal until I went to college in Austin and found out that nobody knew what I was talking about, which made me homesick and proud all at the same time.

Now that I live 9 hours away from my hometown and gave up fried food for a year, you have no idea how much I miss these things! But soon I will return to my homeland and FEAST, my friends (and maybe get heartburn or acid reflux in the process.) 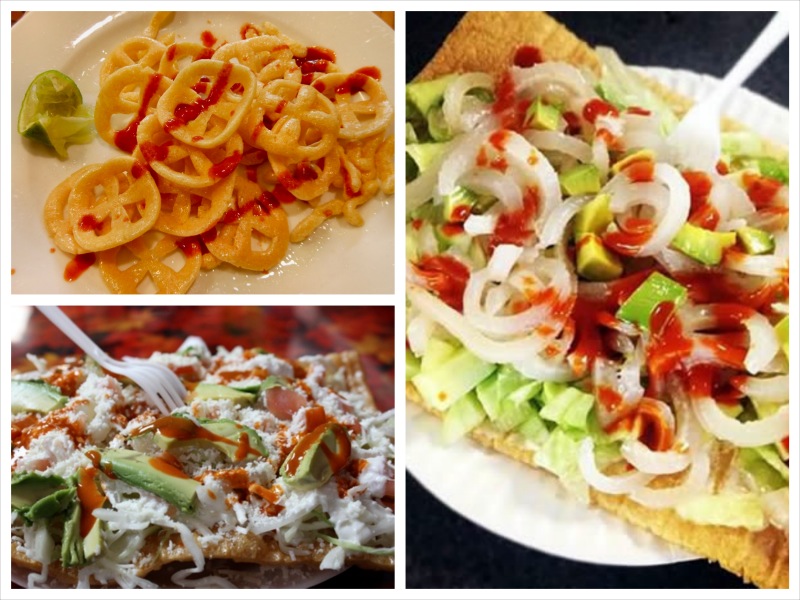 Top left corner: The best way to eat duritos come in a bag that you bought from a street vendor. Bottom left corner: One of the many ways to top off duros preparados Right: Those aren’t onions, they’re cueritos. 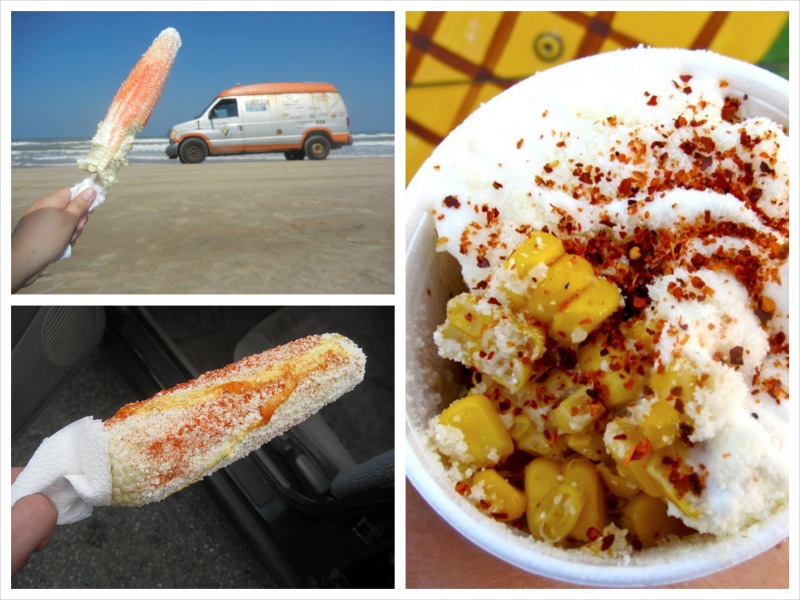 That’s my hand in the top left corner.

Elote or corn on the cob is a beloved Mexican street food. It’s usually roasted and you can either have it on a stick or freshly cut and in a cup. Toppings vary but the main components are salt, lime, mayonnaise, crumbled cheese like cotija or parmesan, and hot sauce/chile. Nowadays you can find this at fancy Mexican restaurants or at trendy taco places, usually owned by white people. I hope you know that while you’re eating your super cool, hip $5 “rotisserie corn” appetizer that I can get this for a $1.50 at any corner in the Valley. 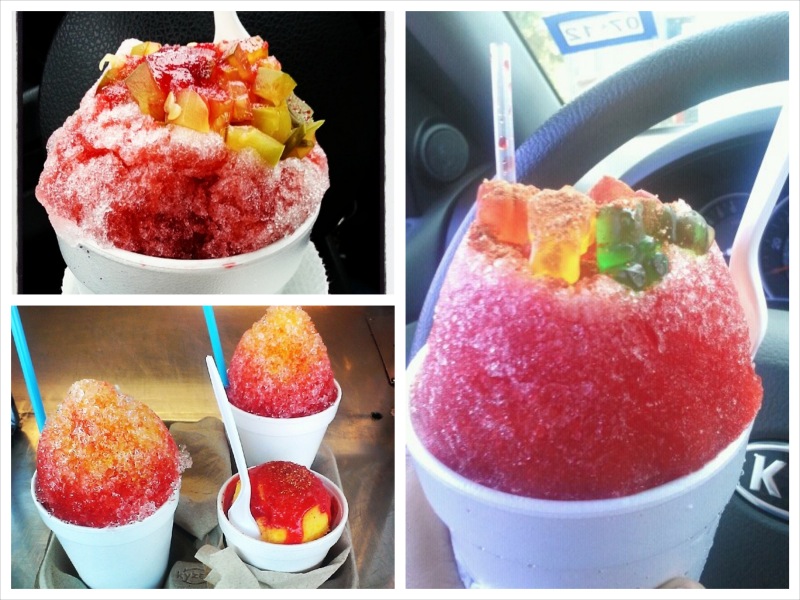 Top Left Corner: Pickadilly; Bottom Left Corner: Raspas and a chamoyada; Right: Something I actually ordered in the Valley

For the majority of the year in the Valley, it is hot and hotter, especially during the summer when temperatures easily reach 100 degrees. Raspas, snow cones, are a very necessary tool to combat the heat. In the Valley, raspas come as varied and unique as the queers in this world. You can literally find any flavor you want from weirdo ones to obscure fruits to some that are little more than lime juice and chile. One of the most popular raspas in the Valley are Pickadillies which are made of shaved ice, a red flavored syrup like cherry or Hawaiian Punch and topped with pickles and sprinkled with Lucas, a chili powder candy, or with chamoy. Personally, I can only eat about a few spoonfuls before I have zero stomach lining. My favorite though is a raspa that is kinda like the Pickadilly except instead of the pickles it has gummy bears. Yum! 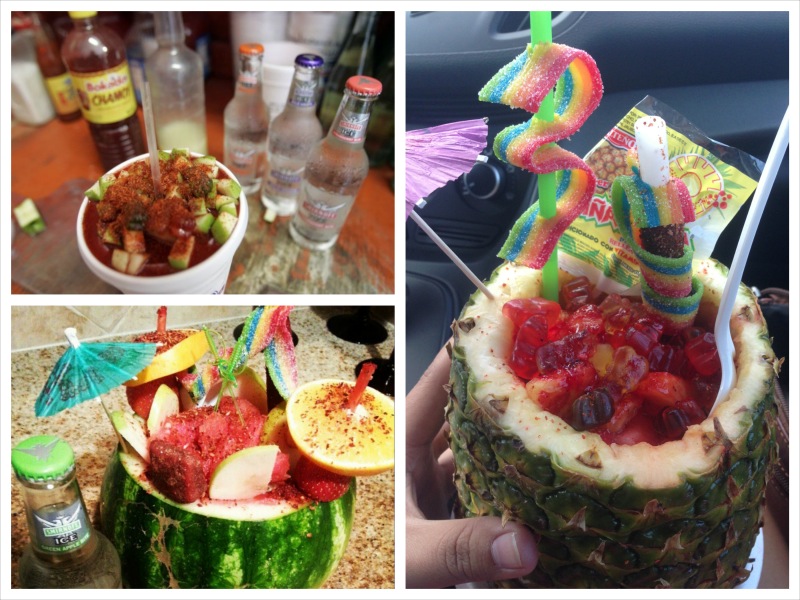 The one on the right was ALL MINE!

Whoa, so many bells and whistles! What is this even? I didn’t know these things existed until a few years ago when relatives and high school friends posted pictures of these beautiful concoctions on their social media. I immediately had to investigate and buy one too. And thank god that I did because a Smirnoff Preparada is probably the funnest alcoholic drink I’ll ever consume. It’s a container full of fruit and then people pour their choice of flavored Smirnoff over the fruit. Or, for a non-alcoholic version, people just fill it with fruit juice or a raspa/fruit mix. Then people top it with all sorts of things: more fruit, chile, lime, gummy bears, chamoy sticks, more gummy candies, a tiny, colorful umbrella — the possibilities are endless. 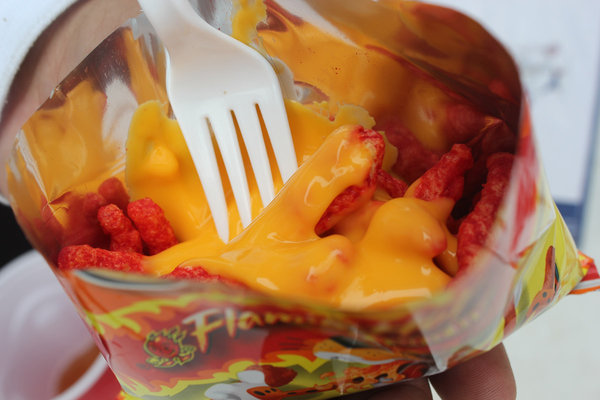 Oh man, Flamin’ Hot Cheetos are a heavenly gift given to humankind. I don’t remember a time when I didn’t know about their crunchy, fiery goodness. Growing up, it was so hard sharing a precious bag with friends but if you didn’t, it would’ve compromised the friendship. Hot Cheetos are golden, but they are even more golden when smothered in nacho cheese. Mmmm! (You don’t even know, ok.) There are so many textures going on with this snack; at first they’re crunchy, then they become soggy on the outside but are still crunchy on the inside. But if you wait too long, they become very soggy. Hot Cheetos with cheese are sold everywhere you go in the Valley: school events, competitions, high school football games, flea markets, even ice cream trucks sell them. We are dead serious about Hot Cheetos with Cheese.

Before you go! It takes funding to keep this publication by and for queer women and trans people of all genders running every day. And A+ members keep the majority of our site free for everyone. Still, 99.9% of our readers are not members. A+ membership starts at just $4/month. If you're able to, will you join A+ and keep Autostraddle here and working for everyone?
Join A+
Related:texasTop 5