Over the last few years, sex toy companies and stores have propositioned us to review their toys in exchange for, you know, their toys. This week, one of our anonymous reviewers tried out the Moody from Fun Factory, available at Good Vibrations. 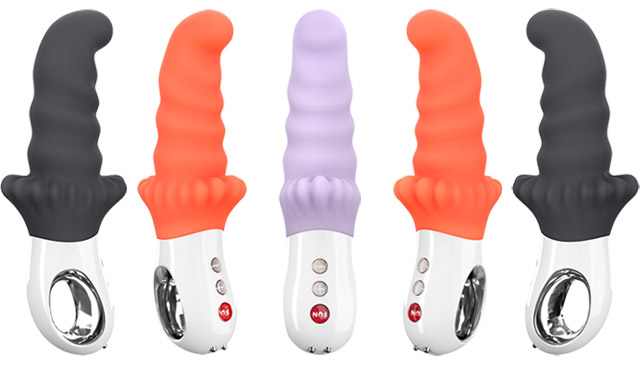 Initially, though, I was nearly defeated by the Moody’s sophistication. It has a safety lock to prevent your bag from buzzing to life at TSA checkpoints, which I did not know about, and I just couldn’t power it on (or rather, unlock it). After confusedly studying the IKEA-esque hieroglyphics-only instruction manual, I had to consult the FAQ section of Fun Factory’s website for help. So out of the box, clearer operating instructions would have been appreciated; I don’t know if I would have gotten it switched on without the oracle of the Internet.

With that sorted: to the races.

The Moody has 12 different vibration settings, including some cool revvy and percussive patterns. While I wouldn’t accuse the Moody of being overly buzzy, I like very rumbly vibes — the lower, slower and more punchy-hard, the better. Because of this, I found myself using only the lowest two to three settings when I wanted to get off and wishing for speeds a little more suited to my craving to basically have my clit pressed against a rock tumbler. And while the variety is a plus, it also means finding a particular setting can be a little like channel surfing in a town where you don’t know the TV stations. But once you’ve learned where your favorites are, the buttons are easy to use so you can adjust exactly when you need to.

The Moody is designed to shine when used inside a person. I wondered how its distinctive, upturned tip was going to feel, particularly while being inserted and then on my G-spot. “Good” is the answer. The shape feels welcome in a girthy way, instead of poking at weird angles. The gentle curve and deep ribbing on the shaft is really nice if you manually add your own thrusting, which is easy to do with the size and loop of the handle. The grabbiness of the silicone also made any fucking-like motion extra fun, but did necessitate (water-based) lube.

The firmness of the shaft is the result of “FlexiFUN Technology.” Fun Factory promises that this means it will “move with your motion,” and I wanted to see if this was true. So like any serious researcher, I inserted it while kneeling with the handle pressed down into my mattress so I could rock on it. It did move with me and felt awesome. The flared, ripply base is designed to stimulate “the nerve endings at the vaginal opening or butthole,” and adds some extra zing. If you like to be on top during penetrative sex but you’re by yourself, the Moody and some ingenuity plus quad strength could be your solution.

The Moody’s charge lasted a couple of hours. It’s also waterproof, so I took it for a spin fully submerged in a hot bath and it was astonishingly unfazed. This also makes cleaning with an antimicrobial soap easy, so you can use the Moody between partners. Small con: after scrubbing I like to also give my gear a wipe-down with a spray toy cleaner, and the black silicone on my “slate” model looked streaky from the cleaner and grabbed every possible loose fiber off whatever rag I wiped it with.

Despite leaving me daydreaming about more rumbly settings and presenting a techie learning curve, the Moody is crazy fun to mess around with. Considerately and playfully made, it’s definitely been added to my stable of toys for regular rides.