Traditionally, I have not been much for exercise. I’ve had a few gym memberships in my time, but for the last few years I felt like it wasn’t something that I could reasonably fit into my life, given my chronic back pain and constant exhaustion and the fact that I work like 65 hours a week. Recently, though, I’ve had to come to terms with the fact that regular exercise is probably one of the only things that will actually help my chronic back pain and constant exhaustion, and so I should probably start looking into it. But the point that I work like 65 hours a week still stands, and also I don’t really have any money, so I felt like commuting to a gym or running half-marathons weren’t really an option. I decided to search for a solution the only way that any of us know how: my seeing if my smartphone had anything for it.

Lo and behold, there are a number of apps (free apps, even!) that I’ve found super useful in helping me keep more active and feel better when I wake up in the mornings without taking hours out of my day. I’m not into calorie counting or trying to lose weight or trying to Transform My Life With Exercise; there are apps for those things, but I’m not super interested in them.

A reminder! Strenuous workouts by yourself can be dangerous, especially if you’re pushing yourself too hard or you haven’t been educated on how to do the exercises properly. Before using these, I’d recommend being sure to look up how to do different moves safely, or even go to one training session at a gym if you can afford it, so a professional can show you how to do each move properly. That said, though, all these things are stupid easy to use, and have made it possible for me to exercise daily in my own apartment, even if it’s only for 10 minutes, and feel good about it.

(Only available for Android, but this app for iPhone looks similar!) 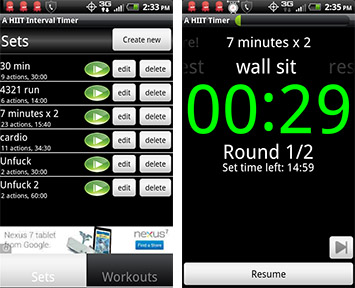 This one looks a little janky, and requires some work on your end before it’s useful, but hey, it’s free! Basically, this app is designed for interval training, or “high intensity interval training.” The idea is that doing intense exercise for short bursts of time can be at least as effective as spending 45 minutes on the elliptical. I can’t actually say whether the science behind it is valid, but I do know that this is about the only kind of exercise I have time for a lot of days, and it’s better than getting none at all. So for this app to work, you need to look through some interval workouts that you think would work for you and input them. I use this one most often, which can be scaled up or down according to your ability and time. If you’re just starting out, maybe only do one round of these exercises, which takes seven minutes. If you’re ready for a harder workout and/or have like a half hour, go ahead and do three rounds. It can also be used for anything else you’d like to time in intervals — I also use it to help myself clean in short intervals (aka unfuck my habitat) of 20 minutes cleaning and 10 minutes chilling out, which you can see in those last two entries on the screenshot, so I don’t get overwhelmed and just give up on it.

Once you set it up, this is really easy to use and hands-free; it will move on to each activity on its own, and use ticking clock sounds to let you know when this activity is almost done, and then a buzzing sound to let you know when to stop. You can also see the next activity sort of floating off to the right, so you know what to expect. The bar on top lets you know how far into the workout you are, so you can mete out pity for yourself accordingly. 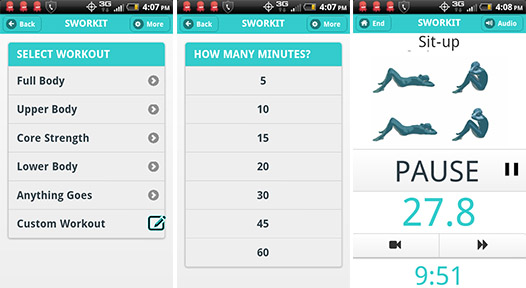 Does looking up workouts and deciding how long you want to sprint as opposed to jog for sound hard? Good news! You can also just use Sworkit, which takes care of pretty much all decisionmaking for you. Choose which part(s) of your body you’d like to focus on, decide how long you want to work out for, and then follow the lead of this gender-neutral blue figure as they show you exactly which moves to do and for how long. If the gender-neutral blue figure is still confusing and you have no idea what you’re supposed to be doing, you can click the video-camera button to see an actual video of an actual human doing the move. Really just couldn’t be easier. And it’s free! If you’re feeling fancy, you can try putting together a custom workout, or you can let the gender-neutral blue figure lead you towards a shining future of stronger core muscles and better sleep at night.

Disclaimer: I have not used this extensively yet, mostly because running seems hard and involves going outside. From what I hear, though, if you are looking to transition from a not-running state to being a person who runs, this is the way to do it. There are different features depending on whether you want to use this app for free or pay for it, but the paid version is $2.99 on Android, which is not exorbitant. (It appears the only version you can find for iPhone costs $1.99. Sorry!) Using it for free will have the app guide you through timed or distance runs and some interval-based running workouts. The paid version (which has a two-week free trial) is meant to train you for a 5k, a 10k, or even a half-marathon. The point of this app is to give you a training program which will leave you able to run a 5k in nine weeks, even if you start out a total non-runner. It starts out with alternating walking and running and builds up from there, using fancy stuff like your phone’s GPS to measure your runs by distance and distance over time so that you can choose to focus on the distance you’re running or the speed you’re running at. Probably what I’m most interested in using it for are the interval-based runs and the “fun runs,” because let’s be real, I’m not racing anyone anytime soon. The interface on the run timer (the screen on the right) is a little confusing to me, but then again I also get confused by my own television remote, so probably all of y’all will do just fine.