Here’s the news we missed while I was listening to Yeezus.

The SCOTUS on Gay Marriage: “Nope, Nothin’ Yet”

When it comes to two critical gay rights cases being decided upon soon in the Supreme Court, I’m gonna get my Rafiki on and dramatically say it is time.

Except oh, oops, no, nevermind. Not today. It’s not time yet. What the fuck is taking so long? Is it the gears grinding in Anthony Kennedy’s head? Is it the Ghost of Lack of Gay Friends Past? Is it getting the files in order? Are the robes being dry-cleaned? CAN A SISTA GET A RULING ON HER FUTURE OVER HERE?

This shit is the worst. 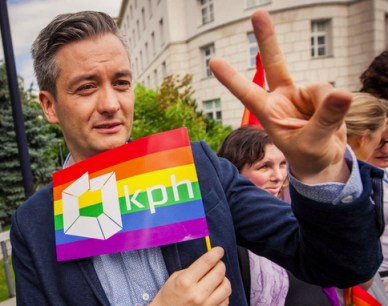 + According to Focus on the Family, trans* people don’t exist.

+ Should anyone really be protecting “gay marriage critics?”

+ Grace University expelled a student for being gay – and then demanded she pay back her scholarship.

Hey, This Is A Cool Thing

I wouldn’t lie to you. We’ve been over this before.

Obama wants to end discrimination against LGBT folks in the workplace… OR DOES HE? We may never know. That’s politics.

What we do know is this: Marco Rubio does not support gays in the workplace. But he’s totally not a shitty human being or anything.

Sen. Marco Rubio (R-FL), who is touted as a top GOP presidential prospect in 2016, thinks it should be legal to fire someone for their sexual orientation.
ThinkProgress spoke with the Florida Senator at the opening luncheon of the annual Faith and Freedom Forum on Thursday and asked him about the Employment Non-Discrimination Act (ENDA), a bill to make discrimination against LGBT individuals illegal across the country.
Though Rubio bristles at the notion of being called a “bigot,” he showed no willingness to help protect LGBT workers from discrimination. “I’m not for any special protections based on orientation,” Rubio told ThinkProgress.

Be Here Now is “a comedy web show about two sexually progressive NY gals who ditch their down-and-out lives for LA in search of a spiritual awakening.” Fund that shit.

Ellen Page is in a new film called Touchy Feely. I hear it’s chart-toppingly Indie or something.