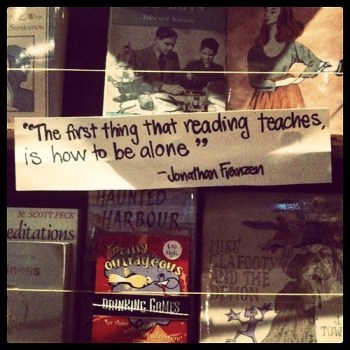 So it’s been a bit of a slow news week aside from the OWS action. Therefore I have nothing crucial to impart to you today from “the world” (besides that once again the OUT 100 is 80% men) and so I thought instead I’d share with you some of the things I’ve read over the last month or so. The idea is that maybe you will want to read them too.

As I’ve perhaps mentioned in the past, I am a GIANT fan of long-form journalism & essays and try to read 2-3 longish magazine/newspaper feature stories a day so that my brain gets bigger. I read online but I also save things I want to read via instapaper and then download them onto my kindle to read elsewhere.

I also read a lot of feature journalism about crime and criminals, which is sort of embarrassing. But, if you’re into that stuff though I can do a Things I Read That I Love: Law & Order Edition next week. I also have plenty of stuff for an Occupy Wall Street Edition. Lemme know! If anyone even reads this post!

I picked stuff that isn’t really directly tied to the news or even to the homos aka stuff I had no reason to tell you about until this day and isn’t this day exciting? It is!

So here’s some things you can read today:

The Death-Wish Kids – Joe Morgenstern via MaryEllenMark.com – A 1984 story on “the teenage suicide pact that left one survivor and many questions.” Haunting, brilliantly written.

Group Portrait With Television – David Finkel via The Washington Post – I found this fascinating. It’s from 1994 about a writer who spent some time with a family that literally watched television CONSTANTLY.

The Glory of Oprah – Caitlin Flanagan via The Atlantic – “Why the “talkinest child” understands women and the power of television better than anyone else.”

Confidence Game – Den Starkman – via Columbia Journalism Review – “The problem is that journalism’s true value-creating work, the keystone of American journalism, the principle around which it is organized, is public-interest reporting; the kind that is usually expensive, risky, stressful, and time-consuming.”

The Fierce Imagination of Haruki Murakami – Sam Anderson – via The New York Times –  “I prepared for my first-ever trip to Japan, this summer, almost entirely by immersing myself in the work of Haruki Murakami. This turned out to be a horrible idea.”

The Hunted – Jeffery Goldberg via The New Yorker –  The story of Mark and Delia Owens, American conservationists in Africa who adopted some very controversial methods and saw a documentary teevee show on them transform into a snuff film.

A Letter from “Manhattan” – Joan Didion via The New York Review of Books — a 1976 relic about Woody Allen movies and her astonishment that people proudly identify with his state of mind — “the peculiar and hermetic self-regard in Annie Hall and Interiors and Manhattan would seem nothing with which large numbers of people would want to identify.”

Q&A with Writer/Celebrity Profiler Vanessa Grigoriadis – via The Writearound – “Obviously I said a lot of things in that Britney piece that were obnoxious, but they needed to be said. She was having this meltdown that was so epic and everybody was participating in it and watching these pictures of her coming out every day – why can’t I call her an “inbred swamp thing?” That’s what everyone’s thinking, looking at these images on their computer!”

Patrick Bateman Was Me – James Brown via Sabotage Times – A remarkably intimate and revelatory interview with Brett Easton Ellis, who did a lot of coke the night before.

Getting In – Malcom Gladwell via The New Yorker –  The ridiculousness of Ivy League admissions processes as analyzed by a Canadian. From 2005.