Erin Foley, comedian extraordinaire. You thought she only existed on the stages of comedy clubs, on various lesbian cruises, or perhaps only on the internet. Well, I have great news: you can bring Erin Foley with you everywhere you go, because her comedy album, Lower The Bar, is out! And it’s really f*cking funny! You get 28 tracks of Erin Foley brilliance which is exactly what our little lesbian hearts desire.

Erin’s comedy album has actually been out since June, but it might make a perfect gift as the holigay season approaches. Just throwing it out there. You can download Lower the Bar from Amazon and listen to it on your iPod when you’re sick of listening to The Con and crying about your ex-girlfriend.

I discovered Erin Foley by accident when I followed cute girls with alternative lifestyle haircuts into a bar in Los Angeles a couple years ago. What I found in that room changed my life forever (not really, but I did laugh a whole lot). It’s clear that Erin loves what she does because she’s damn good at it — she makes stand-up comedy look effortless. After that night, Erin Foley quickly became my favorite comedian (aside from Julie Goldman, duh) and I’ve had sex dreams about her ever since.

If you’re lucky enough to live in Los Angeles, you can catch her doing stand-up on most Tuesday nights for Drunk on Stage at Akbar. The lineup is always very good, and it’s only $5. Just promise me that you won’t pee your pants laughing. I believe in you.

Sidenote: Erin Foley needs her own sitcom, stat. A;ex and I have watched every episode of Whitney so far because we hate ourselves, and we just feel like someone needs to make this happen instead: 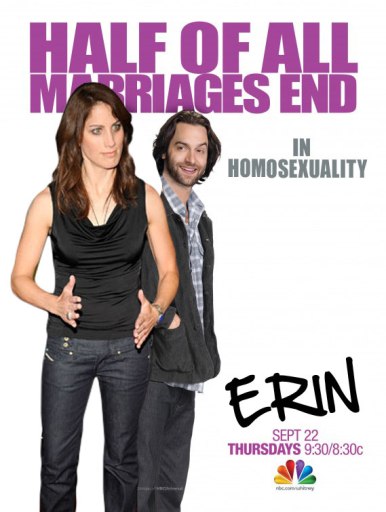 If you need further convincing to buy Lower The Bar or see her show live if you haven’t already, read this hilarious interview that Riese and Jess R. did with Erin Foley in 2009. Or just scan it and look at the adorable pictures.