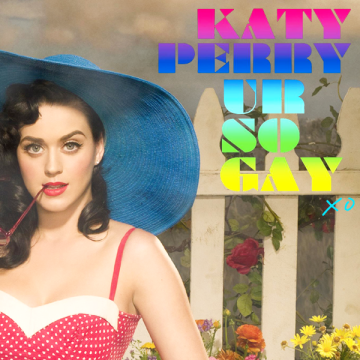 The Trevor Project has given an award to Katy Perry. Yes, you read that correctly. The Trevor Project, the organization whose aim is to prevent LGBTQ youth suicide, is giving an award to Katy Perry to honor her for “inspiring LGBTQ youth to find their spark through her video ‘Firework'” and “increasing visibility and understanding of the LGBTQ community.”

I wonder which acts of visibility and understanding they’re referring to exactly. Was it the time she made heaps of money for celebrating the stereotype that girls kissing girls is an act done for attention? You know, the song Kathleen Hanna called “straight-up offensive,” P!nk said “trivializes lesbianism” and Beth Ditto noted was indicative of Perry “just riding on the backs of our culture, without having to pay any of the dues and not being actually lesbian or anything at all”?

Or was it the time she peppered a song with effeminate gay male stereotypes so she could insult an ex-boyfriend, equating queerness with negativity and encouraging bullying against gay people? Did the fact that she opened that song with the lines “I hope you hang yourself with your H&M scarf /While jacking off listening to Mozart” really seal the deal for a LGBTQ youth suicide prevention group?

Maybe it was the time she talked about looking like a “tranny” in Rolling Stone? Or when she mocked trans* people on twitter, inspiring a condemnation from GLAAD? Those don’t seem like moments when queer visibility was improved, nor were they stellar examples of helping other to “understand” our community any better. Those seem like moments when some homophobia slipped through the cracks, and no one listened when queers called it out. After all, Perry herself has declared that “certain parts of the world — especially in the U.S. — are just dying to be offended” and that it “won’t change how I express myself as an artist.”

Being pissed off at Katy Perry isn’t anything new for the queer community, which is why it seems strange for us to be giving her some kind of award, although it’s certainly not the first time we’ve been baffled by Perry’s inclusion and celebration in a queer space. In 2008, Perry made the cover of the OUT 100, earning the coveted honor of “Musician of the Year,” inspiring lesbian entertainment blogger Dorothy Snarker to ask OUT, “What the fuck? Katy Perry? Katy fucking Perry? This is a joke, right? What you meant to do was pick an actual lesbian to pose amid the gay men, right? Right?” 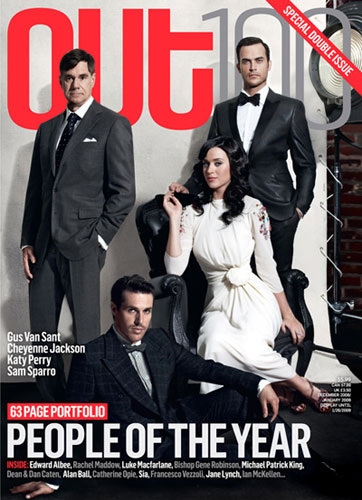 thanks but also no thanks

I think we’re all more than a little familiar with celebrities, especially the straight ones, being showered with praise for minor efforts while queer advocates and activists are left without acknowledgment or necessary funding. Actors, musicians, and others who live in the spotlight may be “important” for influencing the mainstream, but the fact that they’re in the spotlight means that it’s much, much easier for them to take nominal stances on things. It is much less difficult for a famous person with lots of privilege to say that they are okay with various sexualities than it is for most of us, and that’s something to remember when we throw dinner parties for the next Katy Perry. Katy Perry and her kind don’t need any more awards because they have made a semi-decent statement. Those are not the people that the The Trevor Project should be honoring, in my humble opinion.

This is the question I keep coming back to: Why does the queer community have to compromise when it comes to advocacy? I get incredibly tired of a dialogue in which we have to overlook certain negative attributes in our heroes and advocates because, at the very least, they have a positive view on some aspect of queerness. I am sick of a world in which we have to “take what we can get” when it comes to advocates, and shower praise on those who have shown the barest amount of human decency as if any other problematic behavior has been made null by virtue of their stance on gay marriage. Take Dan Savage, who uses “shemale” and “tranny” to refer to trans* individuals, and was elected grand marshall at NYC Pride 2011. Take Ryan Murphy, whose tokenism is baffling in its racist, sexist, and even homophobic roots, but is the current gay ambassador for mainstream media. Lady Gaga has made all kinds of groups uncomfortable, and yet many parts of the community celebrate her unilaterally as a gay icon. I don’t want to celebrate these people any more than I want to celebrate a straight cis person being nice to me because I happen to be queer. Congratulations on being a decent human, but I refuse to throw a dinner honoring the fact that you think I should get married someday (which isn’t something I even want to fight for, frankly, and many other queers are with me on that).

No individual is flawless and no saint is without a past. I’m not asking that our heroes be impossibly good human beings who have spent a lifetime adhering to only the highest of morals. On the contrary, I want people in charge who have period stains on their briefs and a love of guilty pleasure television. Someone who knows what it’s like to be an outcast, or the worst at math, or has spent a lifetime facing oppressions that have raised them up into an outstandingly experienced human being. Cracks let the light in. Give me queers who have been around the block. Give those queers a raise, and throw them dinner parties. See if they want a dinner party, or if they want you to give that money to charities, to shelters, to causes that directly affect the queer community. Let us be a community that honors our own and uplifts our own and directly cares for our own, rather than a community that thinks being prostrate to a hetero mainstream will get us anywhere besides, I guess, feeling like a plastic bag.