sa·lon|səˈlän|noun
1. an establishment where a hairdresser, beautician, or couturier conducts business
2. a regular social gathering of intellectuals or other eminent people at the invitation of a celebrity or socialite

Given that the Speakeasy is a closed space that exists mostly online, a lot of the most insightful, inspiring, and hilarious conversations go unheard by the internet at large. For the most part, we like it that way. On the other hand, we know there are some gentle humans out in the world who would benefit from the tight-knit community of CutiePOCs who have been a major support system for each other in times of sorrow and celebration. With the explicit permission of those quoted, we wanted to give you a glimpse of what Speakeasy love and family looks like.

Emily: Went to get my eyebrows done, and as I’m telling the non-black esthetician how I want ’em she goes “oh so like, eyebrows on fleek.” No. I am not your excuse to practice the AAVE you just learned. Do not pass go. Do not collect $200.

That time Ev’Yan caught a babe

do you have any tips on flirting / expressing & showing interest to a babe you’re on a date with? SHOULD I PAY FOR DINNER? helphelphelp!

Shilpa: um i’m a shameless flirt and i’d say smiling and steady eye contact while smiling (not too long, don’t be creepy) work well. also i have a trick where i remember something they said and then think for a bit how to make it slightly sexual and like…throw it back.

Gabby: holy shit, if first base is oral sex then I need to reevaluate my sex/flirting naked times existence.

Um… but you guys? Ev’Yan really didn’t have to worry about a thing because look at her: 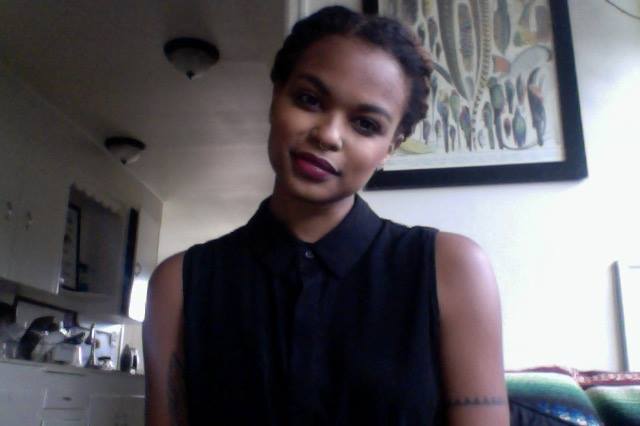 This is my “trying to look cool but inwardly flailing” face. Eeee! image courtesy of Ev’Yan

What a babe, amirite?

Oti: I took a nap earlier and had a dream that I was dating Serena Williams. I feel like my life has changed, like I’m a new person. Could you imagine if Serena Williams dated women, omg, I’m utterly devastated but motivated. I’m going to go and think about my life, mainly my dating choices.
Susan P.: Was this article the catalyst for your dream or is this just a coincidence?

That time Alaina called bullshit on the barbershop

Alaina: I went from A-Camp to the barber shop and the misogynoir is slapping me in the face.

Ashley T.: Yesterday was a great day atop Mt Feels. There was a two and a half hour meet-up for QTPoC which was one of the best and most healing/home like/happy making/positive experiences I’ve had since last time I was at camp. The Speakeasy and our QPoC community is everything.

That time Danielle gave us a gift from the Goddess

Dani M.: This has been a thing for a few days now, but I wanted to share, because Beyonce. This has made my day so much better y’all.

Mrs. Carter can do no wrong!

That Time Yvonne told us why she’s mad, bro.

Yvonne: omg i just saw this post in my feed: “It’s about time that a bill that will give police officers stricter training to avoid shooting dogs, get passed through the House and Senate! I pray now that Greg Abbott signs and agrees as well! ‪#‎justiceforanimals‬ ‪#‎armtheanimals‬” LIKE WHAT ABOUT HUMANS?

Gabby: yo fam, it’s one of those days where a little bit of light can go a long way.

what good thing happened to you this week? who loved on you hard and cooked a meal for you? who gave you the best hug? how did you feel most connected to your community this week? what made you laugh?

share the things, y’all, por favor, if you can.

Kaitlyn: As I work from home (i.e. read story after story about Baltimore) I’m keeping track of all the people who stop to smell or pick flowers from the tree that’s blooming outside our window. Lots of kids walking home from school down the block, but also old men going to the pharmacy and women with toddlers. So far today it’s 3.

Jeanie: After a month of a messy break up with some really unexpected huge financial hits, my motorcycle being stolen, my car being towed, finding a sublet, getting kicked out of a sublet after trying to help a friend out, and keeping up with a daily commute of around 100 miles a day, this past Monday, a friend of mine offered a place to stay for the remainder of the week until I can move back into my apartment. We cooked chicken parm and she bought me choco tacos and I think I was so exhausted/touched/relieved that I almost cried in my pasta.

Kaitlyn: I’ve got another! The 10-year-old I babysit saw some kids his age singing on the train, and before they even stopped and asked for money he pulled all the cash out of his pocket (basically the change from when his mom sends him to the store) and ran over to give it to them. I told him that was a very nice thing to do, and he said, “Well I didn’t see their parents, and I wanted them to have help.”

Marissa L: Some light today came in the form of a beautiful and precocious little girl, whose school I have been visiting for work. She bounced over to tell me, “I’m inventing something!” When I asked what, her voice dropped to a whisper: “A way to send people hugs.” When I asked who she wants to send a hug to, she replied, “Baltimore.” Yes, little one. Me too.

Kaylah: Was told that my makeup is ‘on tweak’ today. I was so embarrassed for her so I smiled and walked away.

Cameron: Is ‘on tweak’ what happens when one does their make-up after being overly caffeinated? Because I can almost get down with that. Almost.

Gabby: yo can we all get our eyebrows on tweak while we chill with our bates and get super furnt?

Never heard of the QTPOC Speakeasy? If you identify as a queer person of color which includes biracial and mixed raced people, connect with us on our Facebook group and be a part of the discussion! (We love our allies but the Speakeasy is a closed space for POC identified folks.)

We also really value your input right here on the website, so please chime in in the comments!

The QTPOC Speakeasy is a collective of Autostraddle's writers of color.