Ashley: We arrived in New York City last week hungry, excited and ready for brunch. Back at home, we always meet up with our local gayborhood and find bottomless mimosas somewhere. Sure enough, New York City wasn’t short on lovely homoqueers, breakfast pastries, and our new favorite brunch food, bagels! 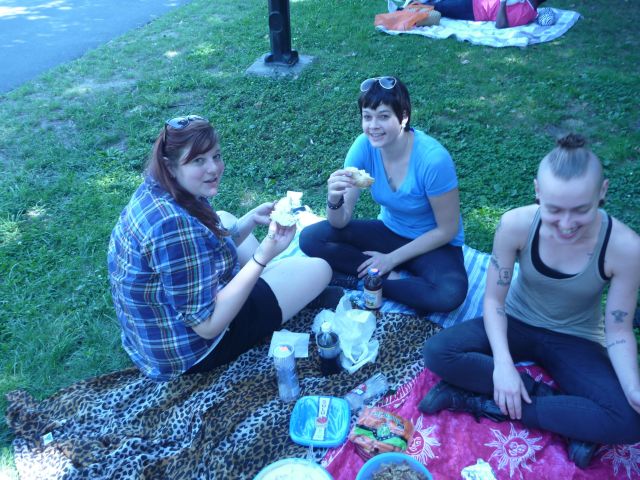 We were told that no one in California knows how to make a proper bagel. After a taste test, we had to agree! If you know where to find one on the west coast, tell us!

We had a lovely afternoon in a park in Brooklyn celebrating Vanessa’s (yes, the one who writes Straddler on the Street!) move to Boston. 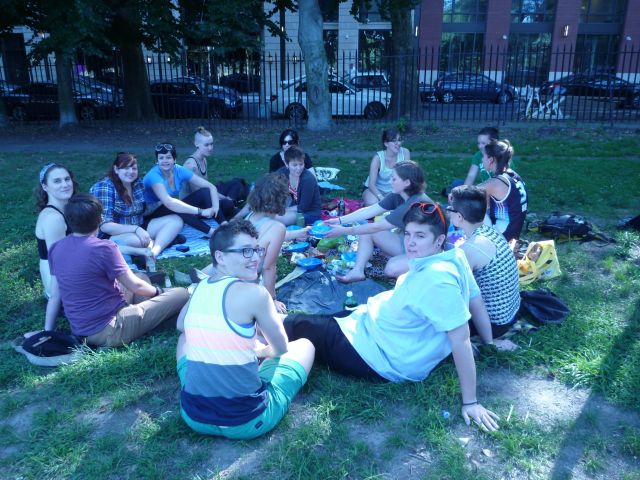 Later, we walked to the East River and watched the sunset over Manhattan. 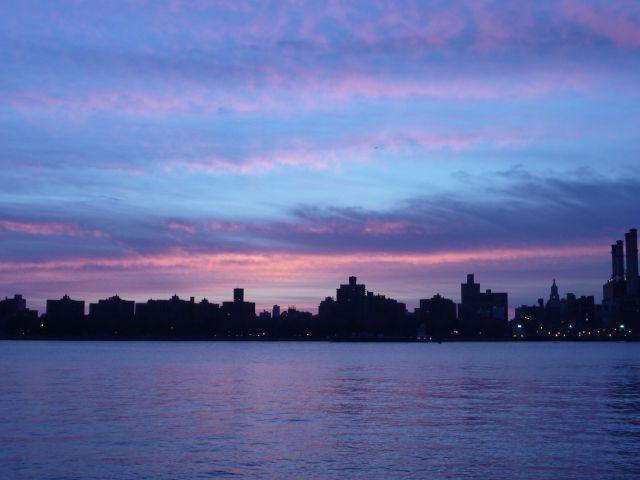 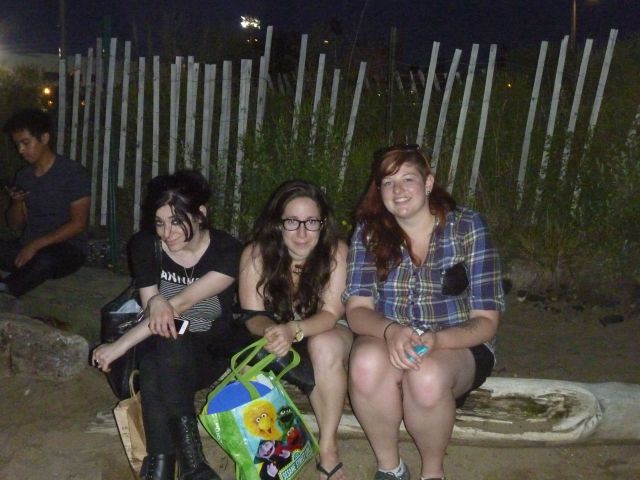 The next day it was time to do super touristy things! We started in the financial district at Battery Park and worked our way up. We packed a picnic and ate it while looking at a miniature faraway Statue of Liberty, and watching all the other tourists snap photos of her looming out above the Atlantic.

We could have paid $17 to take the ferry over and climb inside of her, but between the budget and Lady Liberty’s consent, we were better off just staying in Manhattan.

We started to walk uptown and found Trinity Church, which was beautiful and peaceful compared to the bustle of Wall Street just outside it’s fence. 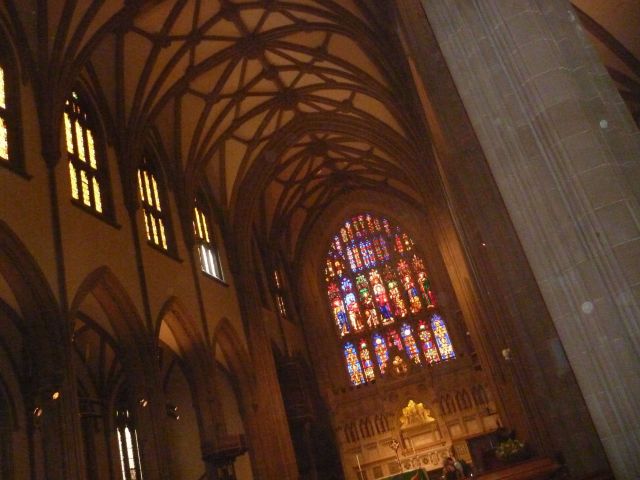 Marine: Side note, in large cities like New York, downtown LA, Chicago, etc., scope out public restrooms to save money. We took full advantage of the fact that Trinity Church had clean and available public bathrooms!

We kept walking and saw the new World Trade Center, which is a single tower stretched high into the skyline. We went in search of the 9/11 memorial site, but we’re pretty sure it was under construction. 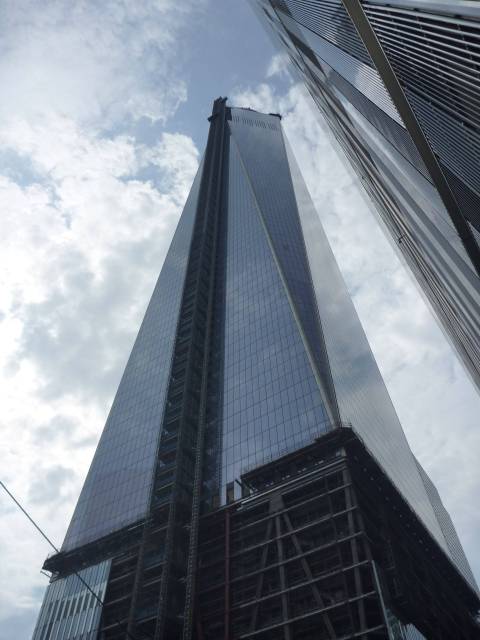 A few blocks north of the tower was the Irish Hunger memorial.

Ashley: My ancestors came over through Ellis Island during the potato famine, so it was really cool to see this big patch of the Irish countryside in the middle of New York City. Standing there right after being at the World Trade Center made me ponder what it means to be American. Sometimes it means the erasure of culture, or the start of a new one. I am in a generation of crossroads; where being American still means you came here from somewhere else, but are too far removed to claim anywhere else as your home. 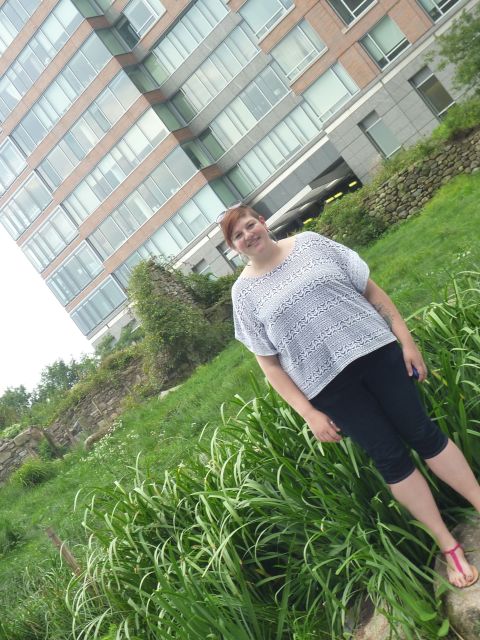 It started raining so we stopped at the AMC up the street and used a set of free movie tickets we had to go see Blue Jasmine . Anyone else see the movie? We have a lot of feelings about it; mainly that being too rich must suck.

After the movie, the rain had pretty much subsided and we went back to Stef‘s (who also writes things for Autostraddle) place in Brooklyn to eat pizza and crash for the night.

The next morning we decided that we belong on Broadway! Well, we belong in a nice comfy air-conditioned theatre watching an entertaining musical. Some of these shows can cost up to $400 a ticket and there’s no way that was gonna work for us. We went to the tkts booth at the south seaport to see what was discounted. We managed to score 2 tickets to see a matinee of Chicago for the next day at about $75 a ticket.

After that we walked around, found lunch and then headed uptown towards the Highline Park. Along the way, we saw the historic Stonewall Inn but were too nervous to actually go inside and order anything. 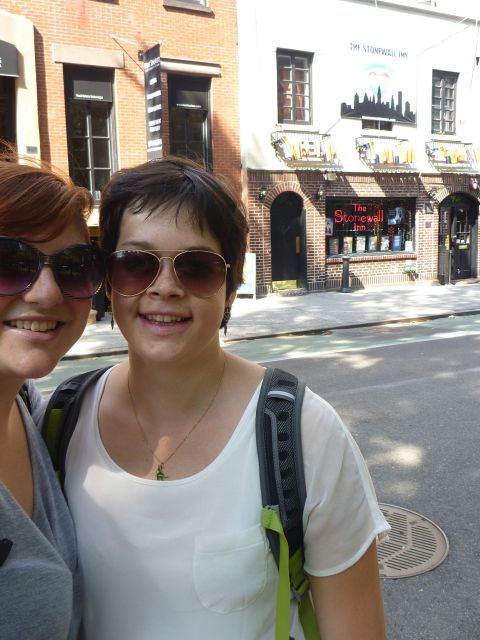 We found the Highline, which is a repurposed old elevated train track, which is now a community park. It was beautiful and relaxing, and we found lots of interesting art along the way. 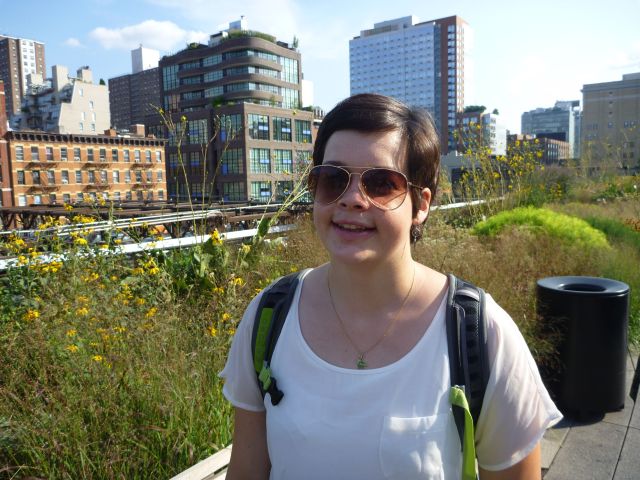 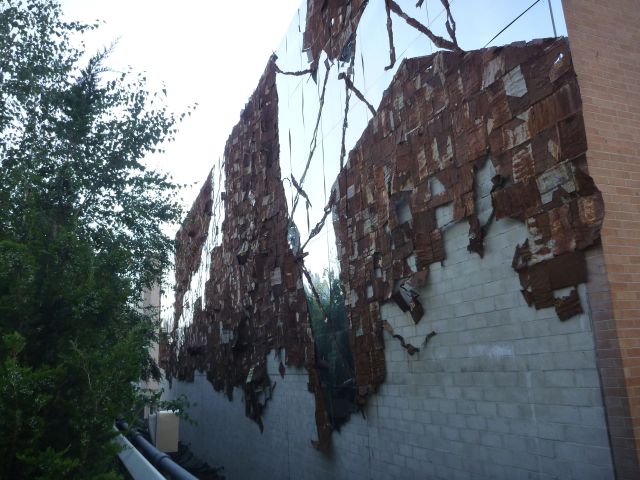 After the Highline, we got on the subway and headed into East Harlem to meet up with one of Marine’s college friends.

Marine: Rachel and I met at UC Irvine. She was dating one of my coworkers while I was a resident advisor on campus during my senior year. She was there for me during my coming out phase, and her close friend was the first girl I dated. Now she works as a kindergarten teacher at an East Harlem charter school.

We went to dinner at El Paso and wound up with enough food for three meals, which was kind of economical. 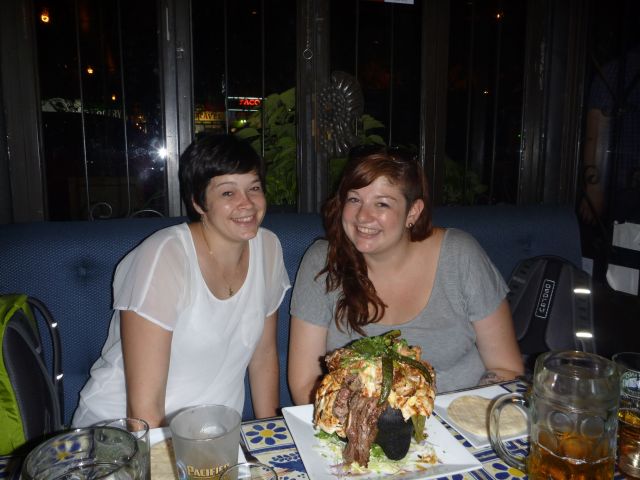 We slept in the next day and reheated our left overs before heading back to the clusterfuck that is Times Square to see Chicago! 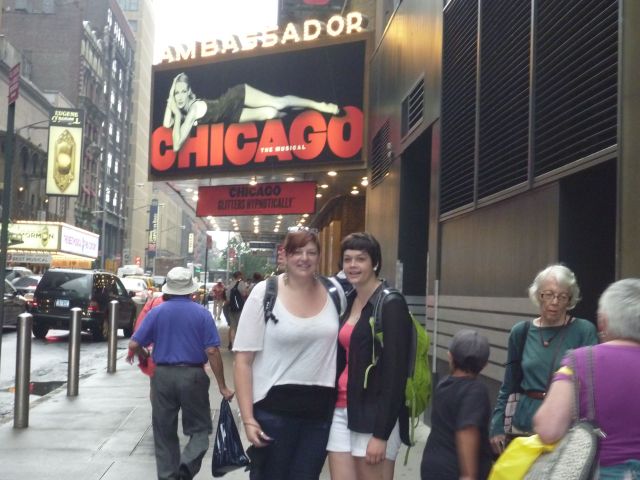 Our seats were literally front row center. We were practically looking up the dancer’s skirts.

After we grabbed hot dogs on the street, walked around Rockefeller Center, and scoped out Central Park, we joined Stef for dinner at this odd, but delicious little Indian restaurant. We stuffed our faces with samosa, masala, and curry before checking out the Nuyorican Poet’s Café for their slam. 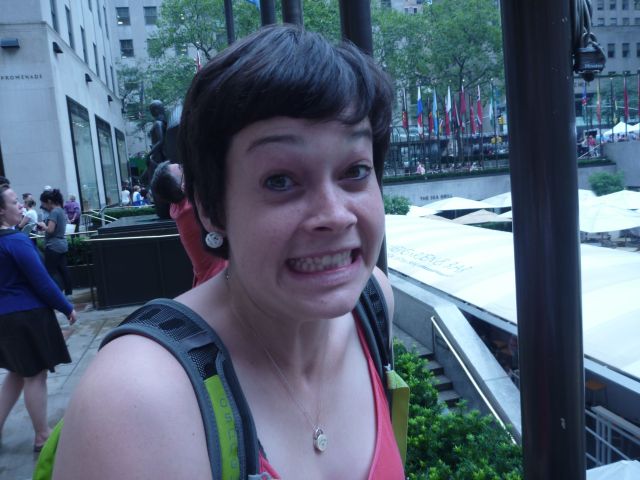 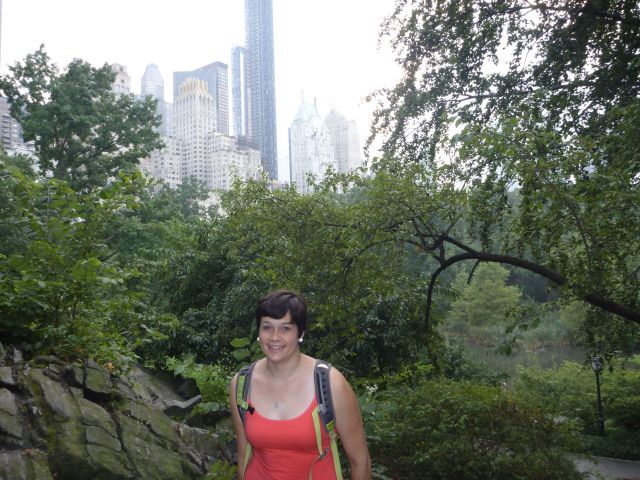 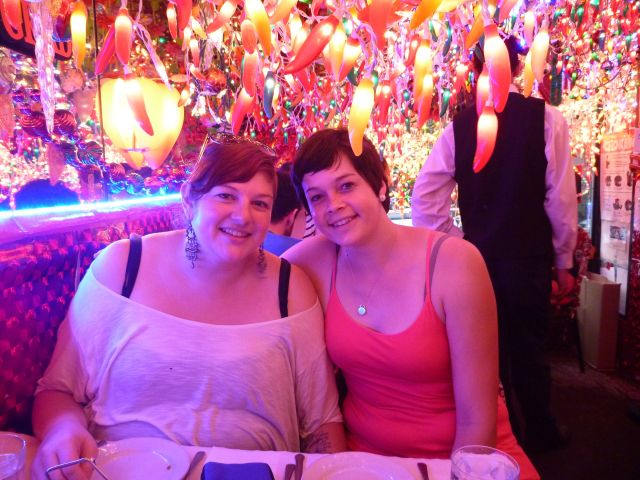 Ashley: Going to the Nuyorican Poet’s Café has always been a huge bucket list thing for me. My home venue is Da Poetry Lounge in Hollywood, and I feel like Nuyo is an east coast counterpart. It’s competitive, full of talent, and notorious. I entered the slam, and managed to cross another thing off my bucket list: winning a slam! 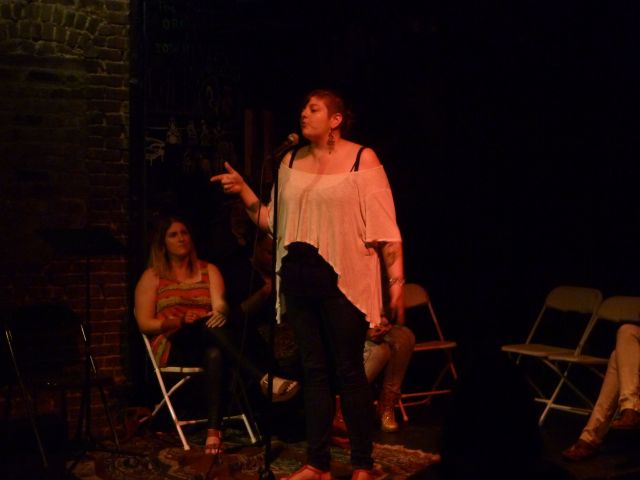 Marine: It pays to go to events like this with Ashley; we got in free, and got 2 free drink tickets! 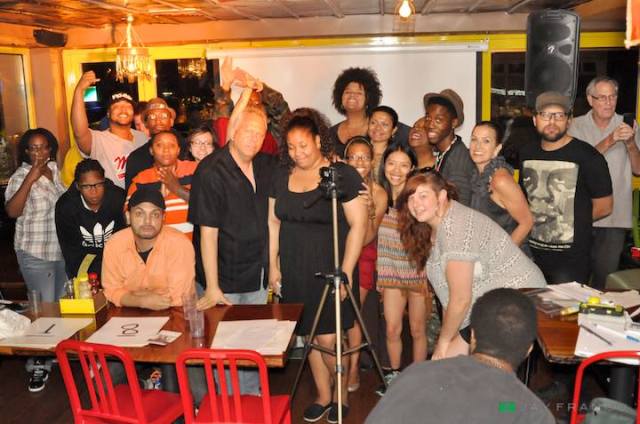 The next day we got on a train to New Jersey to visit Ashley’s grandmother! She did what most doting grandmothers do by taking us shopping and feeding us!

Grandma brought us to the Grounds for Sculpture in Hamilton, which is a large sculpture garden and art museum. Some of the sculptures are made to be like famous paintings that you can walk into, and thus become part of the scene. 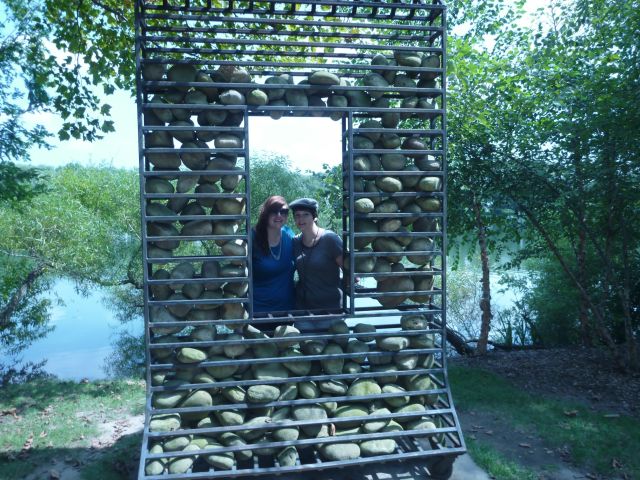 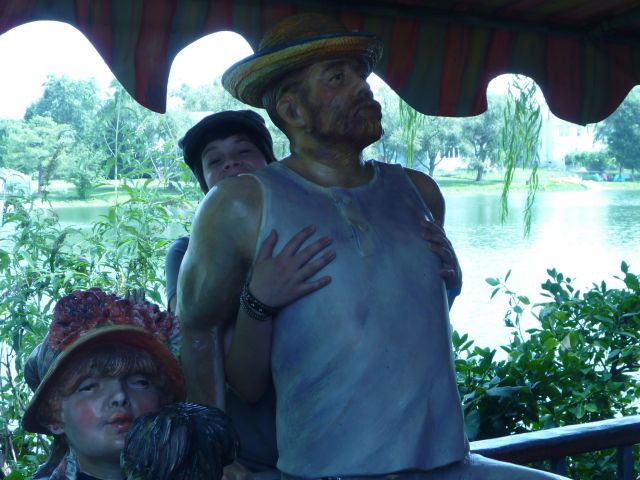 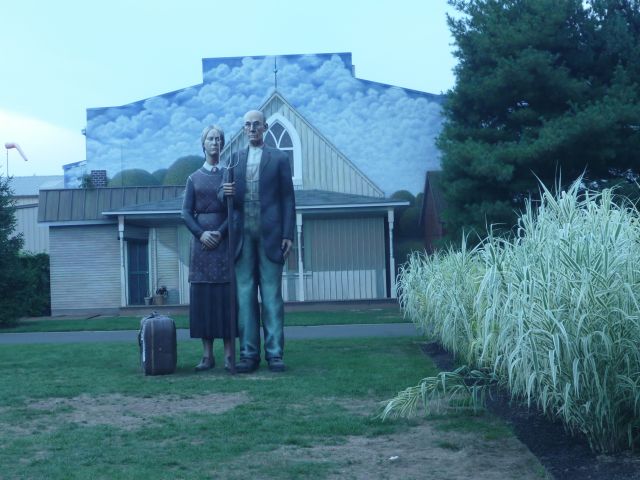 Ashley: Knowing we’re leaving today to head back into the city is bittersweet for me. I practically grew up in this house. I spent every holiday and summer here. I used to fly out with my little sister and read ghost stories until 2:00 in the morning in the upstairs bedroom. We’d capture fireflies in the backyard or run through the tunnels under the house across the street, only learning years later it was part of the Underground Railroad.

My grandfather passed away a year ago and the house is up for sale now. My grandma wants to move to California to be with all her children and grandkids. I know this may be the last time we see this old house. There are over 200 years of memories here, 23 of which I can claim. I know if my grandpa were here he’d be so proud of what we’re doing. He’d tell me I couldn’t have picked a better girl to travel the world with. He’d tell me he loves me, and how there’s no such thing as goodbye. 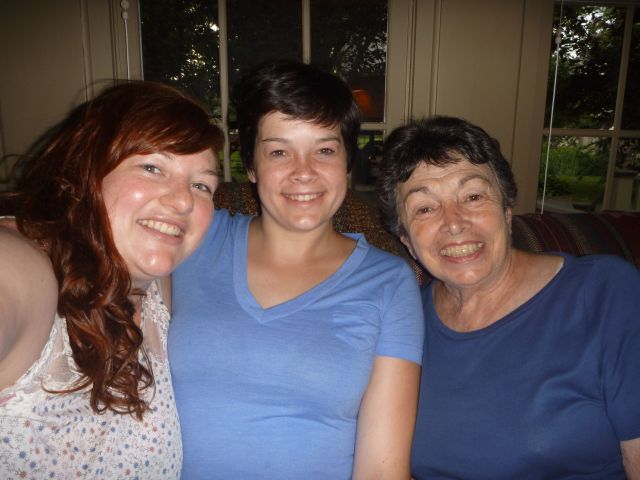 Email us at Ashley [at] thatstarvingartist [dot] com.

Up next: More New York City, Philadelphia, and DC!

Check out extra photos and stories on our blog: The Poet and the Scientist