On August 12, eight new astronaut candidates met for the first time in the Johnson Space Center in Houston to begin training. As NASA previously announced, the astronaut candidate class of 2013 is the first ever with an equal number of men and women. Selected from a pool of over 6,100 candidates — the second largest group in history — NASA picked some incredibly impressive individuals. In this totally biased writer’s opinion, the women especially are killing it. 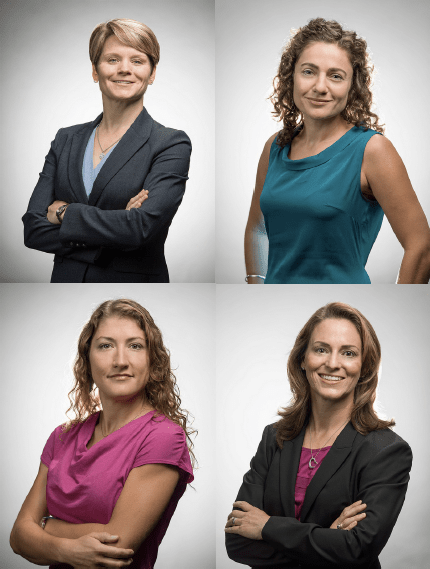 Anne McClain, Jessica Meir, Christina Hammock and Nicole Aunapu Mann are the cream of the crop in awesomeness. (via NASA Flickr)

This year, in addition to traditional selection criteria (a series of intense tests measuring their medical and psychological condition, language aptitude, and mechanical skills), candidates were asked to create limericks and compose tweets during their interviews with the selection board. This just underscores the point: In addition to being smarties with technical skills, astronauts must also serve as high profile public figures.

Within the next five years, NASA expects to see commercial shuttles bringing Americans to and from the international space station. By the end of the 2020s, NASA plans to pilot a human mission to an asteroid; the following decade, on to Mars. As the class of 2013 joins rank with those who routinely break scientific ground and propel the human race forward, millions around the world look to these men and women as inspiration, leaders and role models. This is why it’s such a big deal to (finally) see some gender equality. 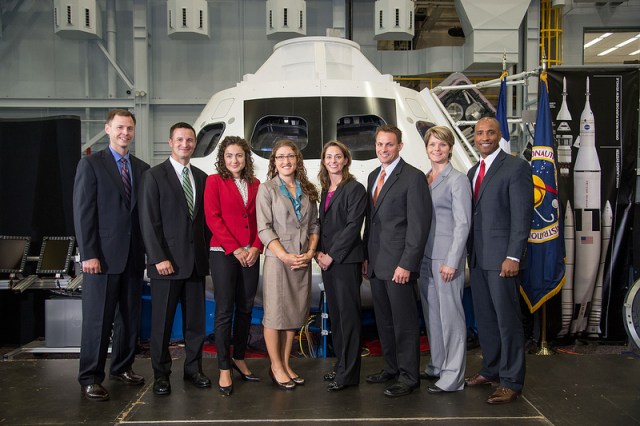 Right now, the team is at the Johnson Space Center undergoing intensive physical training. During the first month, candidates are required to pass a swimming test in which they swim three lengths of a 25 meter pool without stopping, then swim three lengths of the pool in a flight suit and tennis shoes with no time limit. They must also tread water continuously for 10 minutes wearing a flight suit. After completing military water survival training, candidates will move on to their flying syllabus.

All four women this year enjoy SCUBA diving, giving them a leg up on the first month, during which candidates must obtain SCUBA qualification to prepare for spacewalk training. Not including the class of 2013 candidates, 12 of NASA’s 49 active astronauts are women; of the inactive (former and deceased) astronauts, women make up only 31 out of 274. 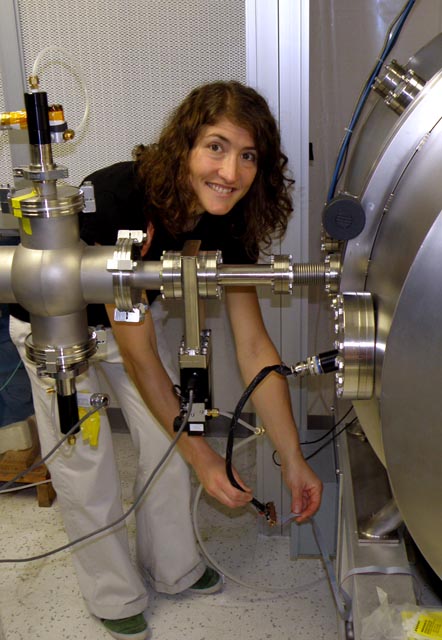 Christina Hammock uses a particle accelerator to test an instrument for the NASA Juno Mission to Jupiter while working as an electrical engineer at the Johns Hopkins University Applied Physics Lab. (via The Antarctic Sun)

An avid rock climber and ice climber, Christina Hammock is a native of Jacksonville, North Carolina. Before becoming an astronaut candidate, the 34-year-old worked in applied physics, cryogenics and X-ray detection. As part of her research, Hammock did two winter seasons in Greenland and one season in Antarctica. Most recently, she has served as station chief for the National Oceanic and Atmospheric Administration (NOAA) Climate and Atmosphere Observatory at Cape Matatula in American Samoa.

In space, Hammock says she will miss her umu, a traditional Samoan method of preparing roasted food. However, she looks forward to flight lessons in NASA’s fleet of supersonic T-38 jets reserved to train astronauts. 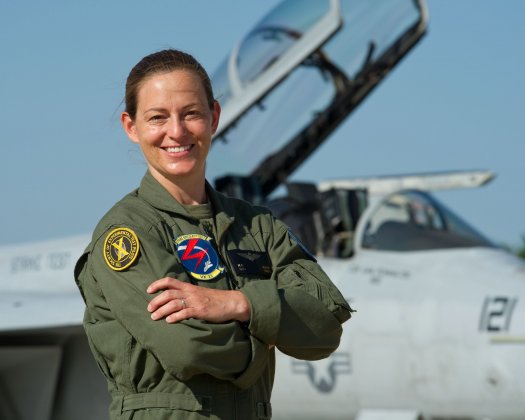 Nicole Aunapu Mann stands in front of an F-18, the twin-engine supersonic, all-weather carrier-capable multirole fighter jet she piloted for the Marines. (via PopSci)

Nicole Aunapu Mann is from Penngrove, California. Prior to joining the team at NASA, Mann was a major the Marine Corps, an operations officer and integrated product team lead at Patuxent River. The 35-year-old has over 1400 hours of flight time and most recently served as an F-18 test pilot. Mann has flown in combat missions over Iraq and Afghanistan. Assuming she successfully completes her training, she will be the first female fighter pilot to become an astronaut in nearly two decades.

Mann has played soccer from an early age, and was team captain of the naval academy soccer team. When she isn’t kicking ass on the field or in the sky, she likes to participate in triathlons and backcountry camping. Mann’s husband, Travis, is deployed in the Middle East with the Navy until fall 2014; that means it’s just going to be Mann and her 17-month-old son, Jack, for the first year in Houston.

ANN MCCLAIN TELLS HOW SHE DELIVERED THE BIG NEWS TO HER MOTHER.

Before her selection as astronaut candidate, Anne McClain was finishing up her last several weeks at naval test pilot school, an intense program she describes as “Crossfit for the brain.” A major in the army, the 34-year-old from Spokane, Washington, was a rotary wing pilot and command squadron intelligence officer. McClain spent 15 months in Iraq starting in 2006 as an OH-58 Delta Kiowa Warrior helicopter pilot. She has over 1600 hours of flight time.

An avid rugby player, McClain has also found professional success in the full-contact sport. Since 2002, she has played at highly competitive levels in England (Women’s Premiership), and in the US (Women’s Eagles). Interrupted only by her deployment to Iraq, after 10 years of playing, McClain moved into a coaching role last year. She credits rugby as one of the big reasons she was selected as an astronaut candidate, preparing her both in fitness and her ability to work with a team. 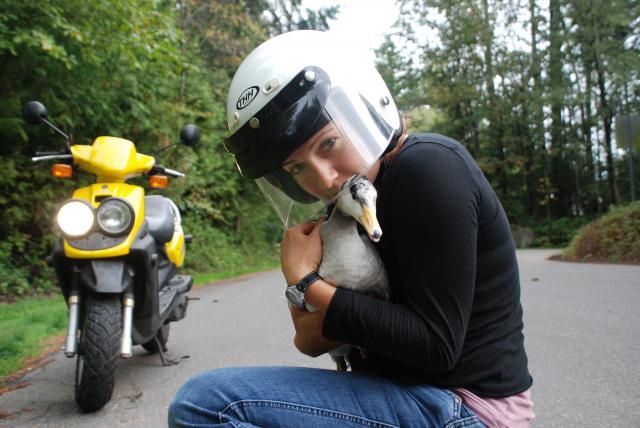 Dr. Jessica Meir holds a bar-headed goose. As part of her research, she raised a brood of twelve goslings since birth, a process called imprinting. (via The Story)

Dr. Jessica Meir, 35, grew up in Caribou, Maine, the northeastern most city in the United States. As a biologist, her work has taken her to extreme places: Antartica, for one, where she did research on penguins at Penguin Ranch. She described her experience ice diving:

“You dive through ice holes that you drill in the sea ice – the sea ice can be three, six, nine, sometimes 17 feet thick. And you go down through this hole, you’re wearing a dry suit and all this gear, which keeps you warmer than you’d expect. At first there is slush everywhere in the hole and you can’t see anything and you think, ‘Oh my God, what am I getting myself into?’ But then you get down below the ice and you can see hundreds of feet, and the light is coming in through the holes in the ice that you came through, and you have this ‘Highway to Heaven’-type lighting effect. And it’s incredibly striking. On the surface, the Antarctic is devoid of color. You have this white and austere landscape. And then suddenly when you get underwater there is all this life.”

Immediately before becoming an astronaut candidate, Meir served as assistant professor of anesthesia at Harvard Medical School and Massachusetts General Hospital. Her specialty was studying animals in extreme low oxygen environments. Previously, she worked doing principal investigation project management at the University of British Colombia where she studied bar headed geese. For fun, Meir enjoys flying; she began taking flying lessons during her undergraduate years at Brown, and now has a private pilot’s license.

Meir holds a bachelor’s in biology from Brown University and a master’s degree in space studies from the International Space University in Strasbourg, France. Her Ph.D. in marine biology is from the Scripps Institution of Oceanography.