Now, as I’m sitting in my living room sweating on my couch, it seems unimaginable that earlier this week, there was a crisp breeze whispering through my windows, begging me to braise. I understand that it’s summer and not traditional braising season, but I was feeling prematurely into the way the August light has subtly shifted and felt a shade of autumn in my heart. Some of that has to do with the long evenings I’ve been spending outdoors in order to be with the people I love, and in the parts of California where you can find me, that means nights with flannel, wool socks, beanies and a fire, even at the height of summer.

Anyway, I had a wide open evening and a bunch of plums and pluots on my counter that I had been eating over the sink. I decided I probably should DO something with them. I don’t know what exactly clicked, maybe it’s that I’ve been eating a lot of fruit in a savory context, but I decided to do beef short ribs braised with broccolini and plums in a soy sauce-based liquid. And then, I thought it would be nice to eat that with ricotta gnocchi with preserved lemon in them.

So that is what this meal turned into: a warm, hearty dish that’s simple, but has some fruity flavors mixed into the richness. This is not a light, summery meal, but you know, I’m still enjoying it after the sun goes down and there is something about it that feels excessive and satisfying. 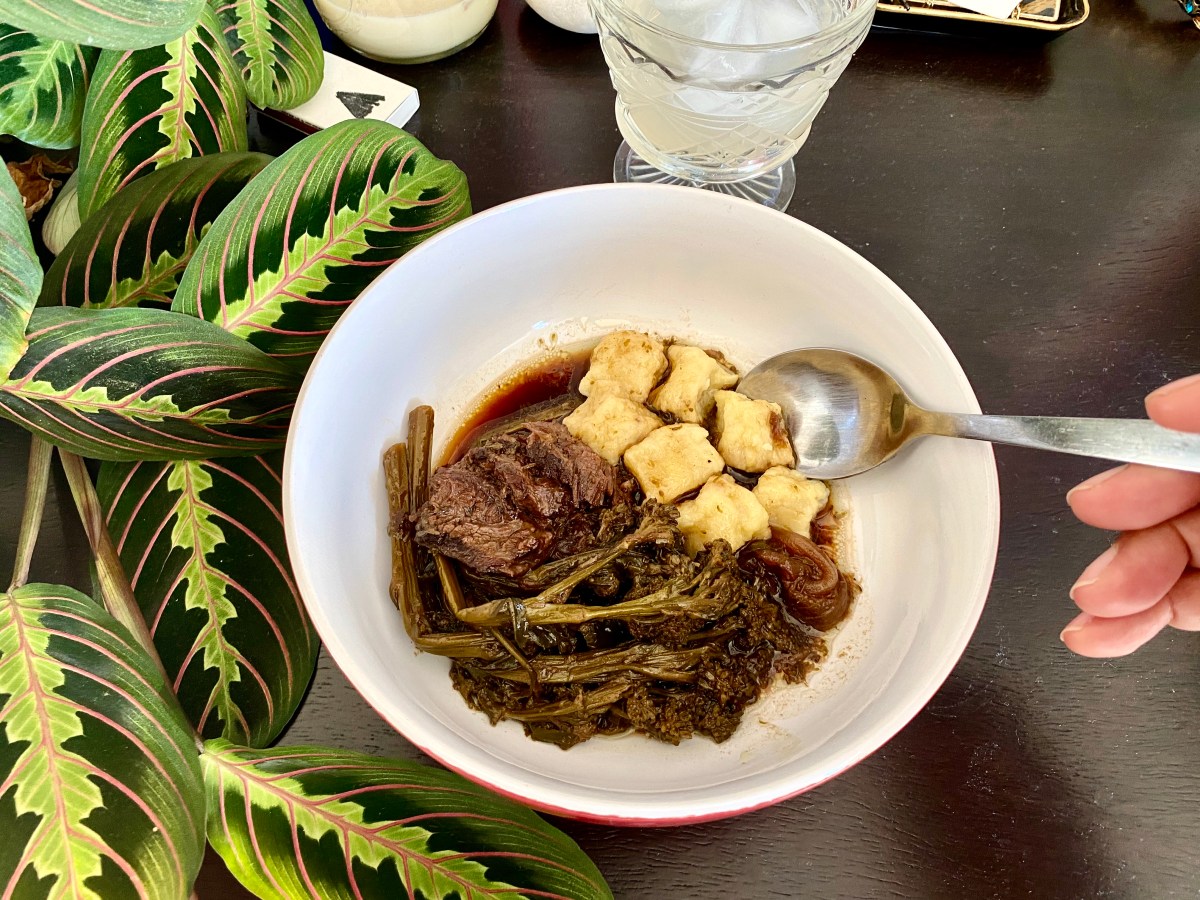 How To Make A Stove-Top Braise

If you don’t eat meat, you can still braise with plums like this, just use a vegetable that’s a little more hearty. I’ve added wedges of acorn squash, whole turnips, celery root, and other sorts of structured, harder vegetables to this kind of braising liquid with great results. I cannot tell you what is happening with the broccolini, but it really adds something to the broth, and there is a beautiful way that onions and plums melt together in a sauce that I have endless affection for.

For the braising liquid
1/2 cup of low sodium (this is what they had at the store!) soy sauce. I will say that I like things salty and if you wanted to be more conscientious, you could do 1/4 cup soy sauce and add more as you go
2 teaspoons Worcestershire sauce
2 teaspoons balsamic vinegar
A spoonful of honey or maple syrup
2 cups of chicken broth (mine was made with some celery so that was a component of this too)
I ended up adding in probably another ½ cup of water to the pot

Get out a dutch oven, put it on the stove over medium-high heat and brown your short ribs. Tbh, I only do this because everyone says this is what you do, I can’t say that I experience the browning in some spectacular way.

After that, take them out and take the pot off of the heat.

Cut your plums into quarters (remove the pits), cut the onion in quarters, and trim any dried ends off of your broccolini. 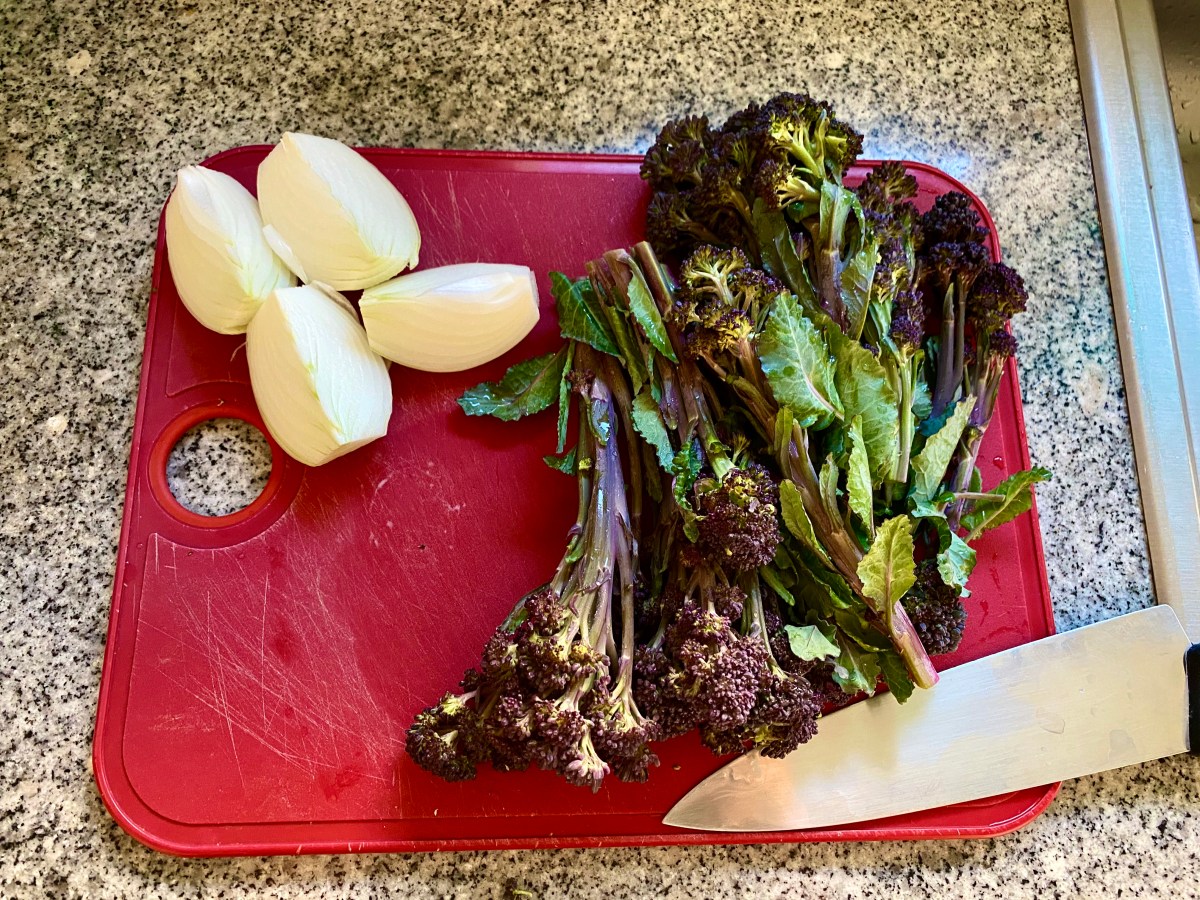 Then I put the ribs back in first, stuff the onion and plums around them and arrange the broccolini on top like a wreath. I don’t mind if my vegetables get super cooked down, but if you like to keep some bite, you can also do the option of waiting until the meat is basically done and then adding them in OR you can do one bunch the whole way and one bunch in at the tail end. Like I said, the broccolini does do something nice to the flavor. If you’re 100% veg, put them all in together, it’ll be fun! 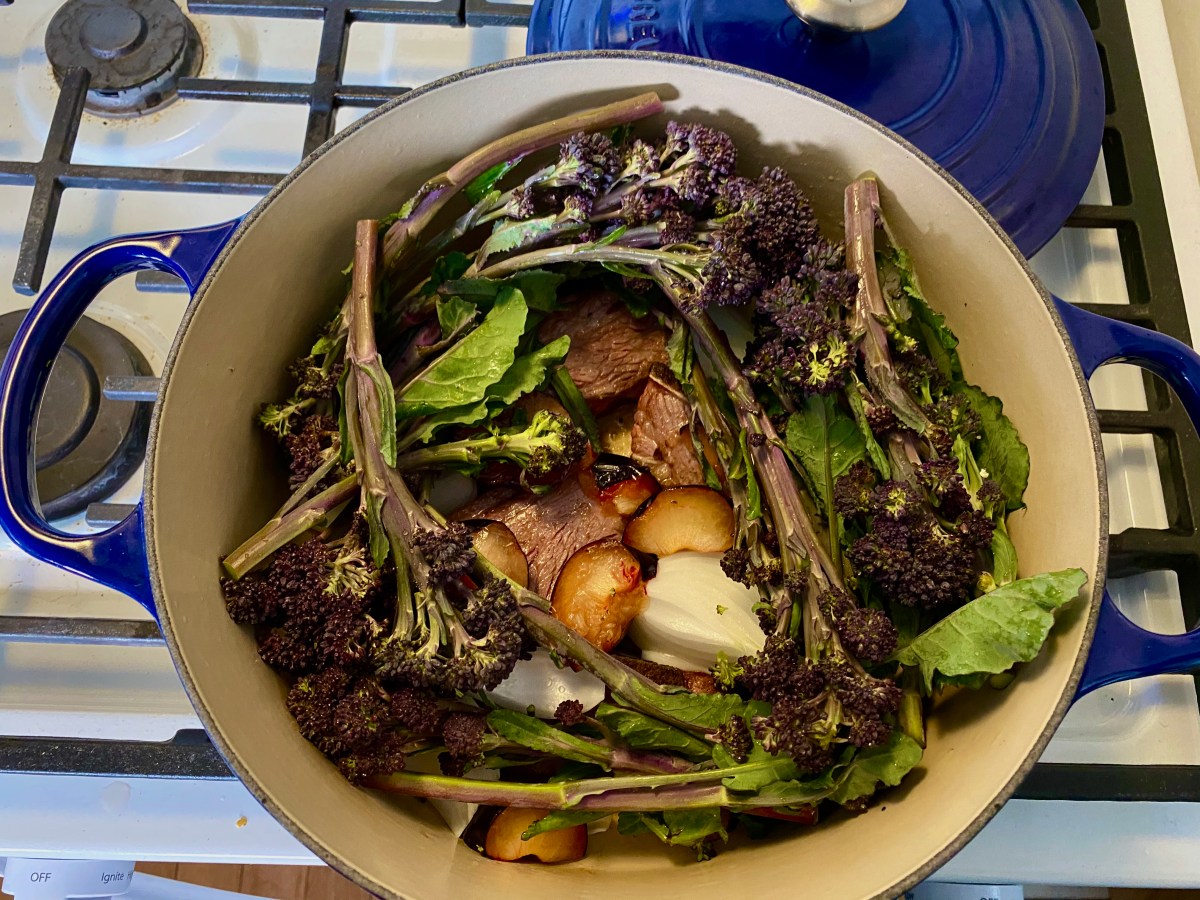 Now mix up the braising liquid, and pour it into the dutch oven. I added chicken broth after I did the soy sauce mix, and then added a little bit of water to make sure the meat was fully submerged. 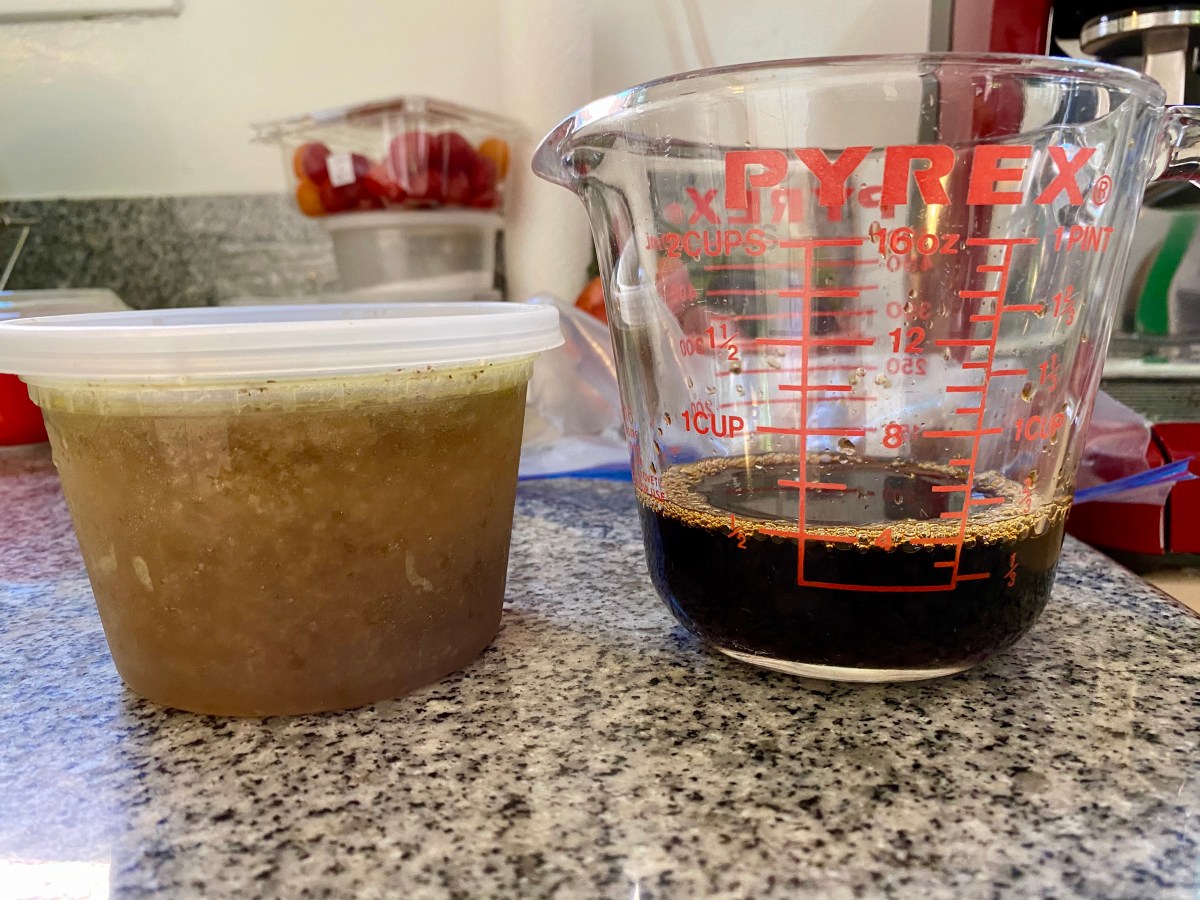 I put the dutch oven back on to the burner, put the lid on and brought everything up to a boil. Then I put it on the back burner to simmer at a very low setting, and cracked the lid so steam could escape.

I left it like this for 3 hours, checking now and then to make sure the meat was still submerged in a liquid and adding water when it seemed like it needed more.

When the ribs had fallen off the bone and were tender in my chopsticks, I considered it done and was happy with the results. At that point, I like to remove the bones and slice the short ribs into pieces so they’re easy to eat over rice, with gnocchi, with noodles, however you like.

I’m here to note, that you can also braise in the oven, and I’ve done a very similar recipe where you put the dutch oven in the oven at 325 degrees F with the lid on, and you can get a similar delicious and really tender meat or veggie in around the same time frame.

How To Make The Ricotta Gnocchi With Preserved Lemon

I like these little dumplings because they’re so cute, have a chew that I like, and also they taste like CHEESE, which is one of my all-time favorite things. They’re also quicker than their potato cousins, though I will admit, as a gnocchi fan, they’re not really the same. But I don’t really love spending time cooking and then ricing potatoes either.

I thought preserved lemons would bring in a bright and also bitter flavor that would cut some of the pure beef fat that was going to be prominent in the short ribs. I also like the way lemon and ricotta taste together, that seemed natural. I made these while the beef simmered!

I’ve been using this Serious Eats recipe for years, and the main difference between mine and theirs is that I’m not nearly as meticulous, and while they don’t turn out as pretty as theirs, they still taste good.

8 oz of high-quality ricotta. I use the basket of Bellwether Farms. Truly, you can still use a more processed, stabilized ricotta and you will certainly live to tell the tale, it just might have a different texture and flavor.

1 cup of all-purpose flour, plus more for dusting the board

I begin by heavily salting a big pot of water and putting it on the stove to boil.

Drain your ricotta by spreading it out on a paper towel with a spatula. Does this feel strange to do? Yes. Does it work? As long as you have sturdy paper towels, that won’t disintegrate into the cheese. You can also pat it down and press it with a clean dish towel.

Scrape your drained ricotta into a large bowl and mix in your parmesan (mine was obviously microplaned, and so I put in more than ½ a cup, but I work in estimates!), flour, and eggs. 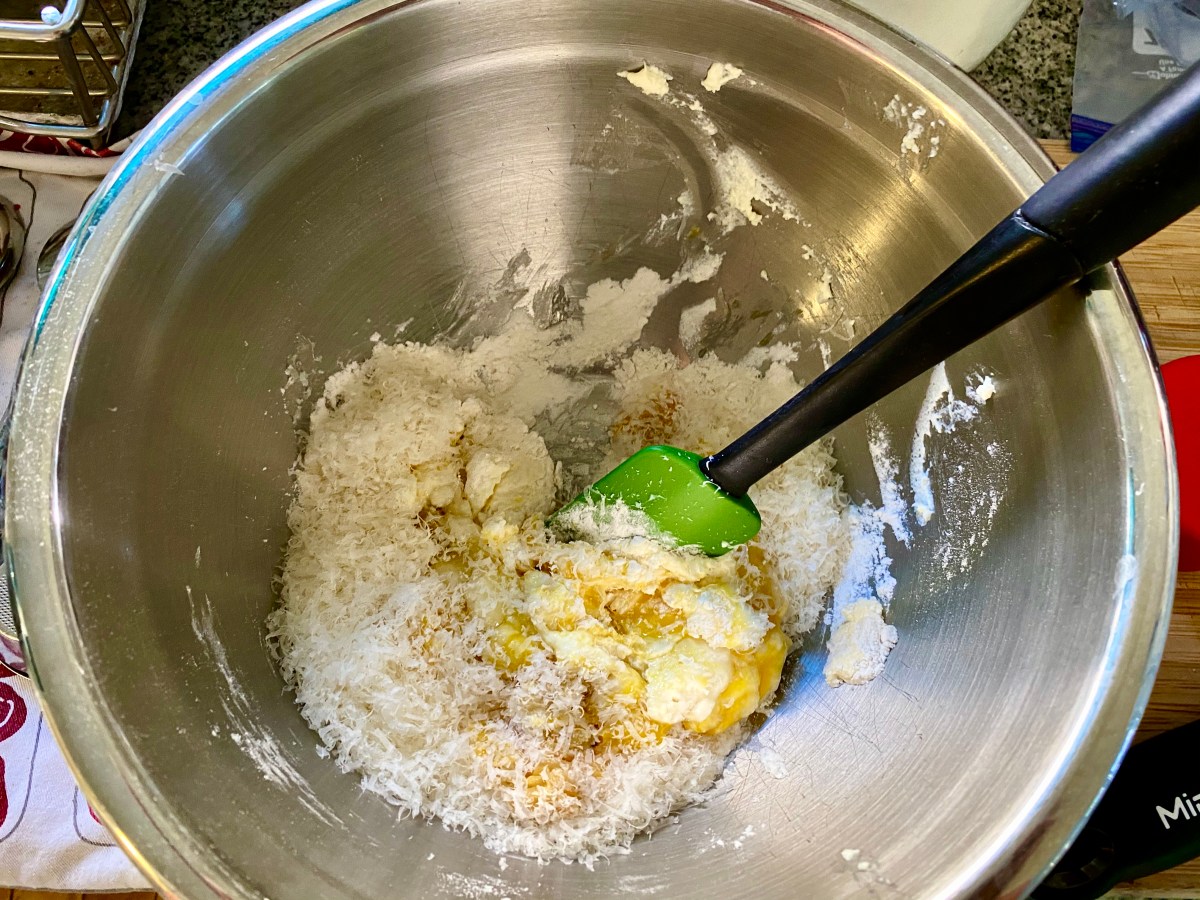 Mix it up with a spatula so it starts to come together into a dough. Before it’s fully integrated, but coming together, add your preserved lemon and salt. Then keep mixing so it forms a dough, a wet, sticky dough, but a dough.

I then flour a board, and get out a baking sheet and cover it with parchment paper.

Then I grab what seems like a quarter of the dough, work it into a ball and roll it out into a long snake that is about the width of my index finger. My experience of these gnocchi is that they get super puffy in the water — they can get tough if you cook them too long and they’re just kinda flat and slimy if you don’t cook them enough. So to try to make things easy for myself, I cut them pretty small, like no bigger than the first section of your fingertip. 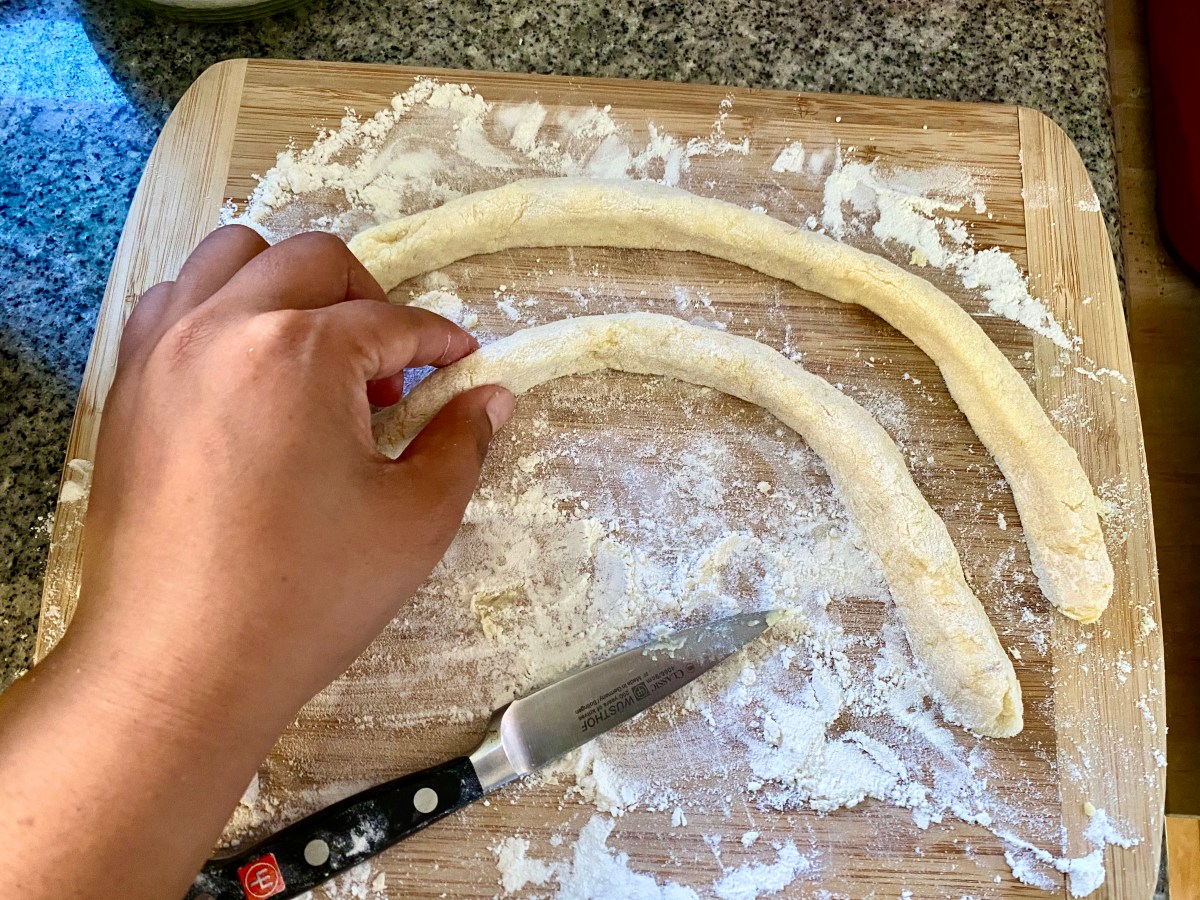 I put the cut pieces of gnocchi dough on the parchment covered baking sheet where they go to await their boil.

Repeat the snake rolling and chopping activity three more times and you should have a baking sheet of cute little pillows. Mine often get pinched or look weird and wrinkly, and I do not care. 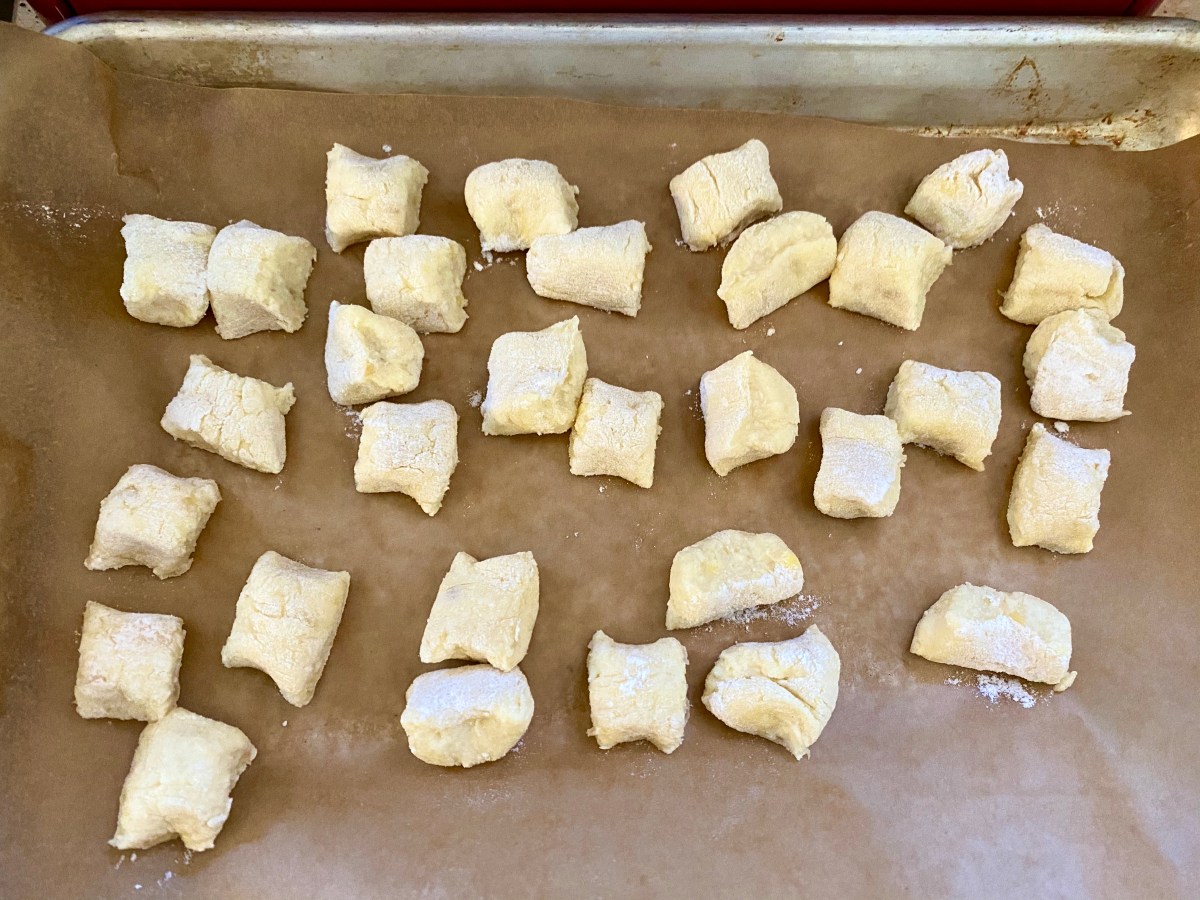 When the water is boiling, I take about ten to twelve gnocchi pieces and fling them into the boiling water. I have no tips for making this elegant, though I’m sure someone else does. They only need a few minutes to puff up and float to the surface (sometimes they need a nudge off the bottom of the pot) and that’s how you know they’re done. 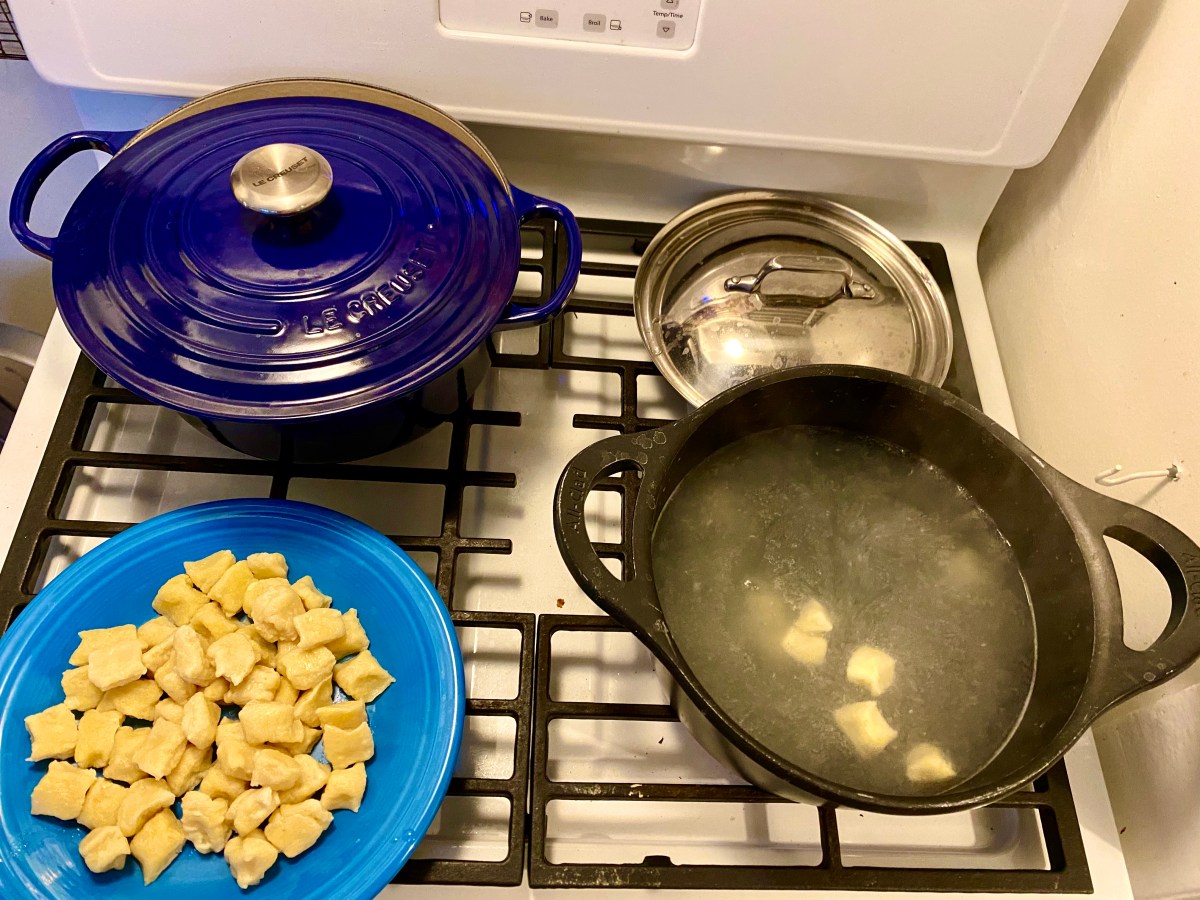 I lift them out with a strainer, and then put the lid of the pot on to bring it back to a boil. Then repeat the process until all of them are cooked.

I think over time you can figure out the exact texture that you like best: mine is just-cooked-through, and still pretty tender.

These are also great with a tomato sauce, a pesto, in browned butter, and all the ways you might want to eat cheese ravioli — they’re sort of like the filling and ravioli outside in one.

Anyway, this was a sort of off-the-cuff meal, but it’s bringing me joy throughout the week.