I’m the type to savor. To draw things out — past their prime, some might say. So it should be no surprise that I love preserving citrus. There’s something exciting about packing them with salt and then waiting, for at least month, before you can even begin to consider eating them. Maybe this week is just about how much I like delayed gratification. In any case, it’s winter, which is citrus season, so it’s the perfect time to preserve. 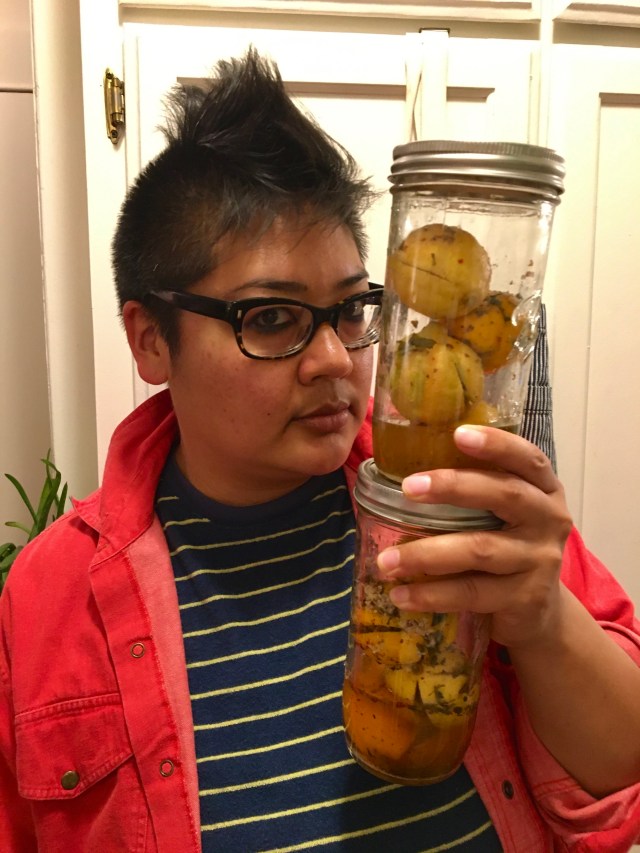 I started making preserved lemons and limes regularly back in 2013. I had eaten dried limes in Persian dishes before and had read about them in an Ottolenghi book, and so was already intrigued by salty, fermented citrus, when preserved lemon recipes started popping up in my feeds.

At the time I worked at a school district office and my co-workers were impressed when I made myself a kale salad for lunch. They were positively floored to learn that sometimes I put fresh herbs and thin slices of apple in my turkey sandwiches. Which is to say the bar for impressiveness wasn’t the highest? But that’s where I was at. I was wearing button-up shirts to work, exchanging biting quips with my my tall gay co-worker all morning and writing my novel in the afternoons at my desk. This is great news, though, because preserved lemons or limes (they have different, but equally fantastic flavor) are really tasty and incredibly easy to make.

I’m sure I found my first recipe for preserved lemons on Bon Appetit, where I love (true, not ironic) to find great, trendy recipes for the ways white people are eating these days. I don’t recall what the recipe told me to do with the lemons once they were preserved, but I’d already figured that I’d use them in all of the same ways that I use fresh lemon and my array of pickles, they’d just be kinda funky and salty. Which is exactly how it works out. I add different spices to the salt that I use to stuff the lemons every time, and that adds a slight variation in flavor, but they always turn out fragrant, just a touch bitter from the peel and the fermentation draws out that brightness of the citrus so it’s an octave lower and smooth, instead of sharp. It’s like miso in fruit form.

The first few batches I made, I boiled the lemons in water first, as was recommended by many recipes, including a previous one on this site, but I later found that this led to a very soggy preserved lemon later (not my vibe), and I don’t like extra work for no reason. There are many great ways to make these, including one on this site, but I like to think the one below is the least effort with maximum reward.

What To Do With Preserved Lemons

I’ve given a few jars to my mom before and Linda repeatedly asks me to tell her what she’s supposed to do with them. So for those who prefer to be guided in their preserved lemon journeys, these are just some of the ways that I’ve used preserved lemons and limes to great success. I will add, a little tends to go a long way because they’re preserved with salt, so I rarely use more than one quarter of a fruit at a time. Otherwise, I don’t think you can go wrong:

If you already make these, please tell me how you use them!

How To Make Preserved Lemons

2 clean Mason jars (I don’t sterilize my jars, I just wash them in really hot water, but I don’t want to promote uncleanliness in our current world state, so consider sterilizing them)
8 lemons — I used Meyers for their soft skin and a nice sweetness, and pink lemons I found. My mom would also add that since you’re going to be eating the skin, you should probably go organic.
6 tablespoons Kosher salt
2 tablespoons sugar
1 teaspoon chili flakes
½ teaspoon ground coriander
2 teaspoons crushed loose tea leaves — I used a blend of mint and jasmine
A pinch of ground cloves

Keep in mind that you can use as many or as few spices as you want, and you can definitely direct your own flavor. Nobody else has to use tea, I just like how it tastes.

Directions
Wash and scrub your lemons. 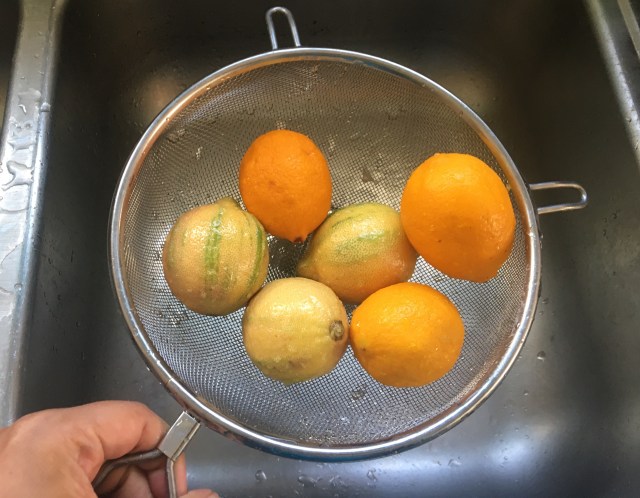 Mix up all of your sugar, salt and spices (and maybe tea) in a bowl together. 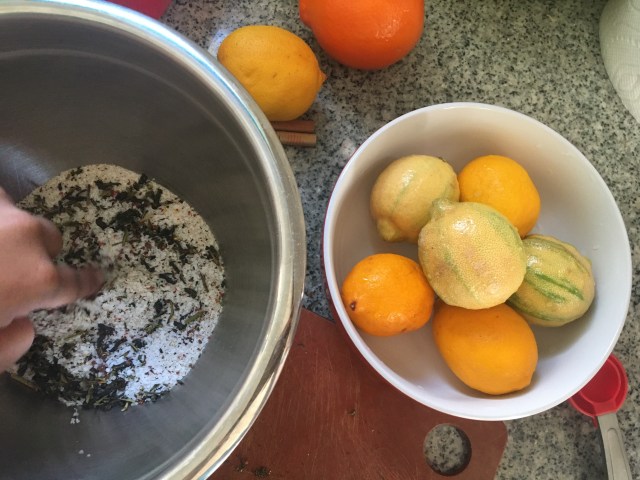 With a sharp paring knife, cut three or four slits lengthwise on the fruit. You want these to start not quite at ends and go almost to that white pithy part in the middle, but in the way of cutting paper snowflakes, leave some fruit at the ends and in the middle so it holds together.

Now, my dear dykes, is where you get to gently part the slits, open them up with your fingers and start filling them with the salt mixture. Really get in there. Pack them til they’re overflowing. I’m not kidding. 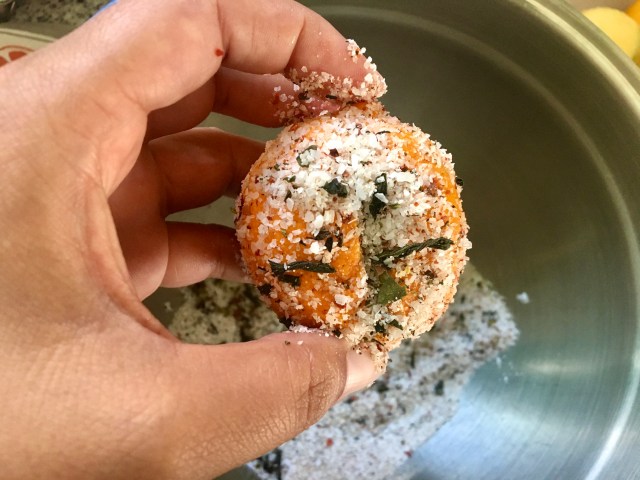 Once you’ve packed all the slits on the lemon with salt, you can drop it in your mason jar and move on to the next. I usually use tall jars and can get four or five lemons or limes in each jar. Feel free to smash and squish them, it helps them get good-weird. I often dump the rest of the salt into the jar at the end, your choice. 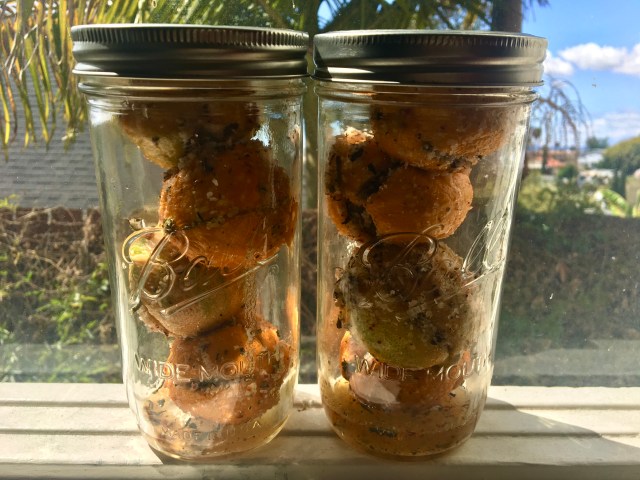 Now, the juicy wait. Like any good crush, I put my jars in a dark place, usually in a cupboard under the sink, and let them marinate. The salt will start drawing out all the liquid in the fruits. It will collect in the jar and create a brine. Every day or two or four, I will turn the jars around so the brine bathes the lemons at the top. I usually let them sit like this and ferment for about a month. If it’s hot out, I might check in at two weeks.

People ask me how you know if something “bad” has happened to them, how to tell when they’re “off”, but I’ve never had that experience. The salt really does a good job of staving off mold.

After about a month, you’ll pop the lid, and it will just smell different in there. Like a whiff of the sea with an undertone of deep, dark lemon. Like romance. You’ll just know. If you don’t, you can check on the texture of the fruit, and once the skin has softened and the flesh is mushy, you’re in a good place!

Fill the jar with water and place in your refrigerator. You can start eating them right then, or let them go in the water for another week.

I have kept these and eaten them for a whole year and encountered no negative effects, but I’ve already told you about how I like to wait and then hold on to things too long, so maybe give yourself a couple of months to use them and move on with your life.