All photos by Natasha Raichel Photography

In the United States of America, 24 states and the District of Columbia require a sexual education course. 20 states require provided sex education curriculum be “medically or technically accurate” and “age appropriate,” which naturally, varies greatly from state to state and often has an abstinence focus. In 2005, my tenth grade sexual education class taught me that condoms were between 30-70% effective and never worked on HIV/AIDS, and focused entirely on reproductive, hetrosexual, and cisgender sexual interaction. Thankfully, Sexy Sex Ed is here to save us all.

For six years, Tanya Turner of Whitesburg, Kentucky has been taking it upon herself to provide queer positive and body positive sexual education. “It started off very haphazard and was mostly funded out of my own savings,” she told me. Turner was operating on by largely word of mouth, getting requests through Facebook and text messages. 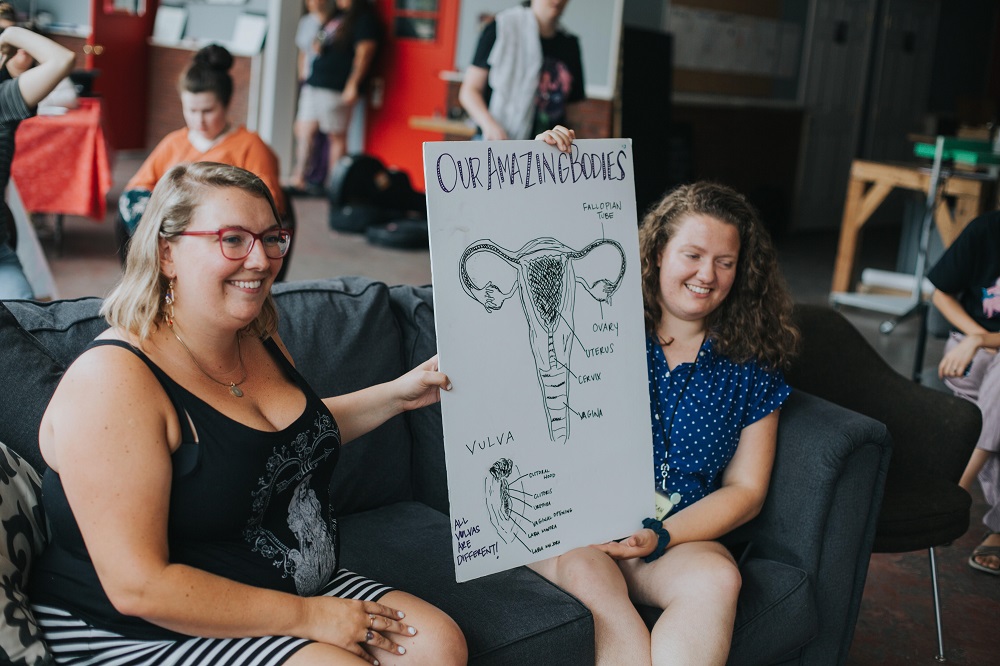 “In 2016, I started being more proactive. Everyone had their own reactionary panic move to the 2016 election. And one of mine was like, ‘Oh, I need to buy a house and create an underground abortion clinic.’” Turner eventually decided against that particular praxis model, but did start pitching Sexy Sex Ed, making memes, and making calls to youth centers and drop-in centers (facilities that work with people experiencing homelessness, and other marginalized communities to provide fundamental resources). Interest picked up a lot in 2016, and in 2017 Turner did a dozen trainings in multiple states including Kentucky, West Virginia, Tennessee, and North Carolina in after school programs, church basements, and community colleges. “[Community college students are] an important audience that gets left behind for a lot of resources. They’re still teenagers and community colleges don’t often have a ton of resources.”

“In 2018, a Girl’s Rock Whitesburg started and I did a Sexy Sex Ed [workshop] there,” Turner tells me. “The teenage girls that were a part of it were so excited that some of them stayed in contact with me and wanted to [become sex education workshop leaders]. A week later I heard from a girl, who was sixteen at the time, and she sent me a list of questions from her friends. And like two weeks later she sent me a picture of an electric toothbrush her friends bought her as a vibrator.” Well done, today’s youth. Back in my day we were using doodle pens. Uphill. In the snow. So, the kids are alrigh’.”

Turner got to watch baby queers find themselves, including one of the attendees of her workshop come out and have her first girlfriend, and found the experience overwhelming. “Honestly, the tiniest validation to kids at this age is all they need to run.” Turner emphasizes that the education kids are getting is bad, even for the straights, but especially for queer youth. “For queer kids it’s so violent and erasing and makes kids in rural places feel even more isolated.” 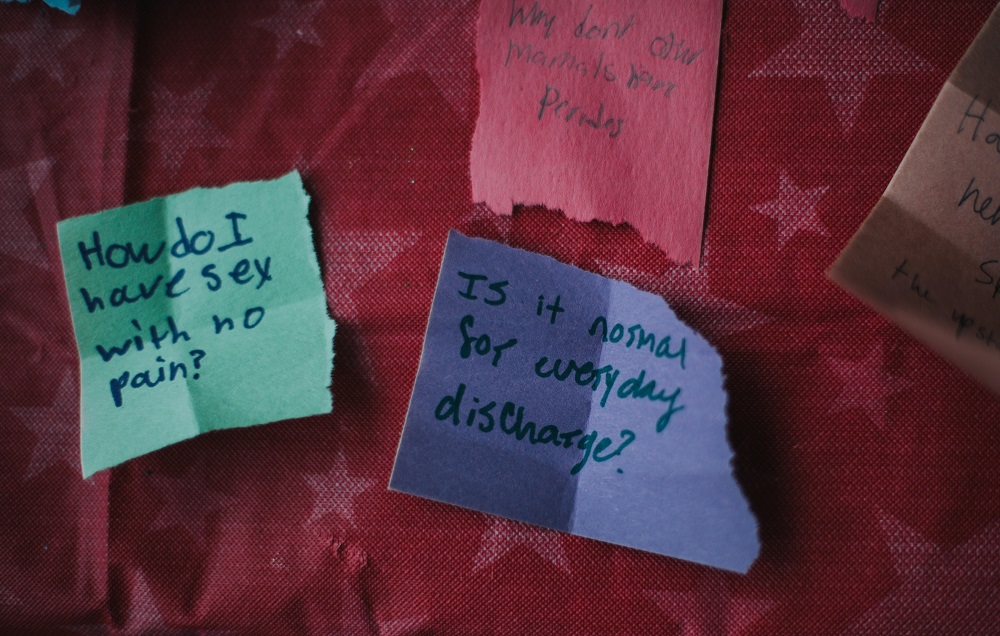 Turner started to think about sustainability, and never really wanted to carry the project all by herself. In the last year she was able to raise about five thousand dollars, through grants and a Facebook fundraiser on her birthday: “So I’m out here spending my birthday money [on this project.]” And last year, Turner was able to traine twenty new educators, a quarter of them teenagers and most are queer. The call was open to anybody, but the majority of participants were queer femme, which Turner attributes to being “haunted by the myth of virginity our whole lives.”

“Thank god for the Tik Tok generation” who have created and curated Sexy Sex Ed’s social media presence. People have provided pro-bono help with logos and website mapping “the floodgates of queer fucking godliness have turned this into something wonderful.” The website has a streamline booking process and created a map of the reproductive sexual health work being done in Appalachia, both in major cities and small towns. “People have come out of the woodwork to help because almost all of us have a horror story from our sex education. And we’ve lived through it and want better for everyone.”

What do these workshops look like? It varies from workshop to workshop. “I went to one drop-in center, and there were like fifteen kids, half of whom were trans, and I watched them come into this trainer and have therapy time and play video games after school. And that was one of the wildest ones I’ve ever done. We had an impromptu dick drawing contest. When you let kids be themselves, you can actually get really far with it. They’ll tell you what they need.”

Turner has developed a curriculum where a lot of the content is drawn from the participants and “should be a little different every time.” Turner emphasizes this is a poor and oppressed people’s learning model, drawing out what the audience knows and what they’re curious about, and using an art-based curriculum to further that knowledge and facilitate comfort and expression. “We create skits about bodily fluids that transfer disease, we sing and dance about precum. You’re using words that you’re normally not allowed to say, and everyone’s laughing and clapping.” Once you’ve gotten your precum dance montage out of the way, asking difficult questions becomes a lot easier. “We draw our systems, what we think is going on in our body, and they are always very funny. Then we look at a little more scientific model, because most kids don’t even get anatomy.” 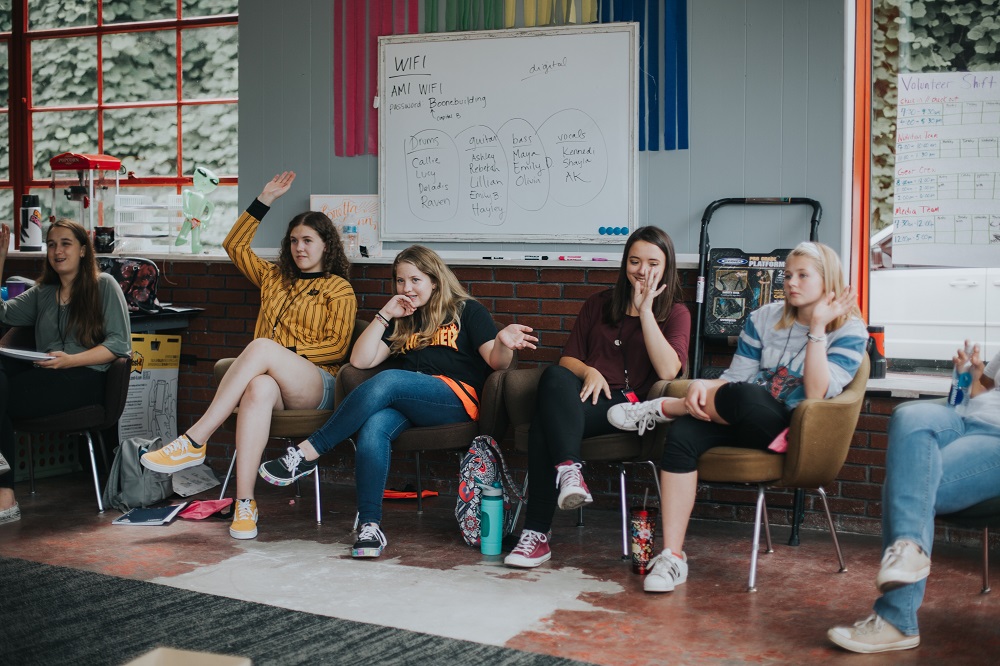 “So many people in their life will experience health issues relating to their sexual organs, and most of them are preventable. But we don’t know how to track what’s going on in our body, so we talk about discharge and cum and menstrual cycles because every body is different, and knowing how your body is is really important.” And where doctors are supposed to be advocates for your body and health, a lot of queer people have a lot of trauma connected to doctors. “Even the best doctors is only as good as what we can articulate is going on with us. We have to be able to tell them what’s happening.”

Consent is also a huge topic in Sexy Sex Ed, and relating consent to what participants are already doing in their day-to-day lives. “The whole workshop is focused on consent, safety, and anatomy, and part of that is the practice of saying ‘no’ or a really enthusiastic ‘yes!’”

The goal of Sexy Sex Ed is to build a greater network of trainers and get more funding and materials (you can donate money through their website, and materials by contact directly).

To learn more about Sexy Sex Ed, check out their website.

Join A+!
Related:Dispatches from the Country Culture War