It’s Trans Awareness Week, the week leading up to Trans Day of Remembrance on November 20th. When we say that Autostraddle is website primarily for queer women, we want to be 100% clear that that includes queer trans women and that it’s important to honor trans women year-round, not just in obituaries. So all week long we’re going to be spotlighting articles by and about trans women, with a special focus on trans women of color. We hope you’ll love reading everything as much as we’ve loved writing and editing it.

I’ve been reading comics ever since I was in elementary school, when I would go to the public library and run upstairs to the comic section and check out whatever graphic novels they had, even if I had read them a dozen times before. But it wasn’t until I was a teenager that I saw my first trans character in a comic book. Like many people, my first experience with a trans comic character was in Neil Gaiman’s Sandman. I remember when I was in high school opening up Volume 2, titled The Doll’s House, and reading issue #14, Collectors. This issue focuses on a serial killer’s convention and predictably features some extremely disturbing content. The thing that stuck in my mind, though, is one panel where we see a killer standing over a dead trans woman with narration that says “There’s something about preoperative transsexuals that makes The Connoisseur uncomfortable. Something brittle and bright in the back of their eyes. He loves them. But he always feels they’re laughing at him. He’s only ever found eight that he’s been able to talk to.” This was my first time seeing someone like me in a comic book. It made me terrified for my future. 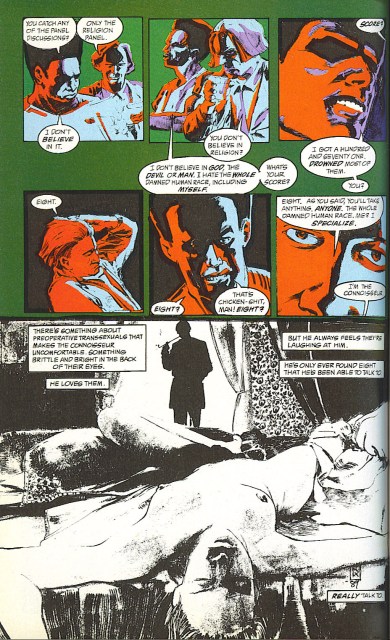 One of the big selling points of comic books is that they give us heroes to look up to and want to be like. They show us possibilities. They show us dreams and wishes. Not being able to see yourself in those dreams, wishes and possibilities can really have an effect on you, especially if you’re a younger reader. When readers are told that none of the heroes look like them, it can seem like it’s impossible to be a hero. That’s why representation is important. It allows us to see a brighter future for ourselves and to set out for that future. For trans readers, that representation has been almost nonexistent until recent years.

Unfortunately, transgender people are a group that was so marginalized in comics that the only characters trans people could see ourselves in were shapeshifters, aliens and victims of magic spells or science fiction body swaps. While trans characters were scant for most of the history of comic books, these kinds of characters were actually pretty popular, going as far back as DC Comics’ Golden Age. So while these characters are not quite trans, they still served an important function in giving trans readers some semblance of representation in their comics. 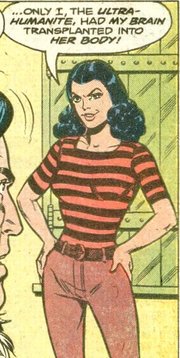 The Ultra-Humanite in Action Comics #20 with art by Joe Shuster.

One of the earliest examples of a not-quite-trans recurring character took place in Action Comics #20 from 1940. The Superman villain, Ultra-Humanite (a super genius similar to Lex Luther), has seemingly been killed. However, we learn that he had kidnapped a famous actress, Dolores Winters, and placed “his mighty brain in her young vital body.” As soon as Action Comics #22 this version of the Ultra-Humanite was gone and later instead of putting his mind in the body of a woman, the character would transfer his consciousness into the body of an albino ape. However, during the events of Infinite Crisis, a universe-wide crossover event in the late 2000’s, and in the 2006-2007 Lightning Saga crossover event, the Ultra-Humanite’s time as Dolores (now spelled Deloris) Winters is revisited. 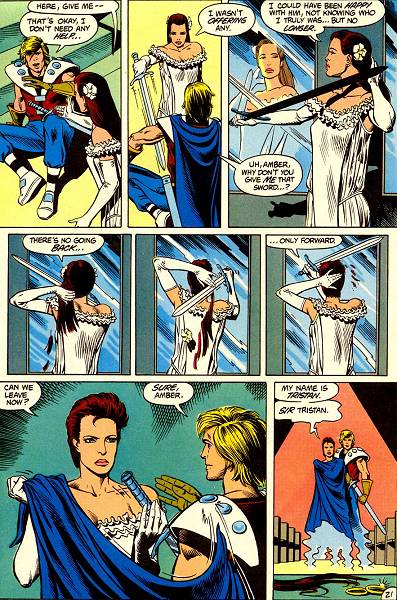 Sir Tristan in Camelot 3000 with art by Brian Bolland.

The next notable examples appear in the 1980s when DC Comics published Mike W. Barr and Brian Bolland’s sci-fi/fantasy series Camelot 3000. In this story King Arthur and his knights of The Round Table are reincarnated in the year 3000 in order to fight off Morgan le Fay and an alien invasion. One of the knights, Sir Tristan, is reincarnated as a woman. Tristan spends much of the comic trying to figure out a way to be turned back into a man, but in the end accepts this new body and role, even ending up with Isolde, Tristan’s lover throughout time. Stories like this showed the lack of awareness of real life trans people that comics had. Sir Tristan could have been portrayed as a trans man, and in the 80s there were ways for trans men to transition, so one would think that a thousand years in the future, those techniques would be much better. Marvel, for their part, in Alpha Flight #45 from 1987, had their own mind-transfer story. The Canadian superhero Sasquatch, who was basically a man who could turn into a giant white beast, was “killed” and his soul was transferred into the body of another Canadian superhero, a woman named Snowbird. So for a time Sasquatch had a “female” body when in human form and the male, Sasquatch form.

This trend really reached its peak in the 1990s. We saw characters like Malibu Comics’ Mantra, who had her own solo title, an immortal male superhero soul who was reincarnated into the body of a woman; Top Cow’s Joshua Cane, a character from the series Rising Stars who was possibly trans and had as one of their powers the ability to turn into a super-powered woman and DC’s Comet, who appeared in Supergirl comics and, in 1997, was revealed to be a shapeshifter who alternated between being the bisexual human woman Andrea Martinez and the male centaur Comet all reflected this trend of comics playing around with gender, but not actually having trans characters. 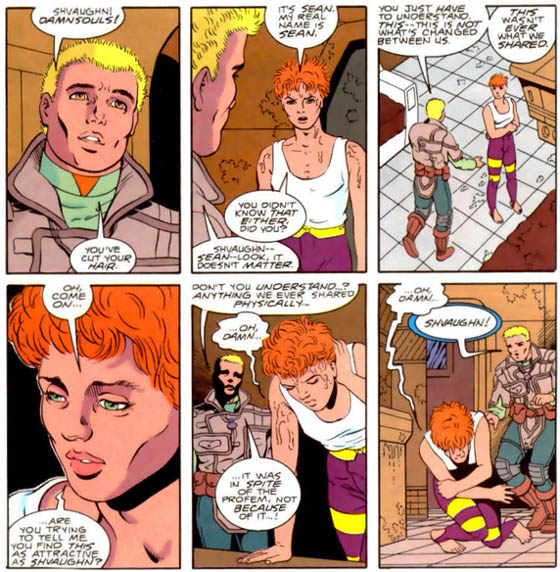 From Legion of Super-Heroes #31.

One of the characters who comes closest to actually being trans is Shvaughn Erin, a member of the interplanetary Science Police in the DC comic Legion of Super-Heroes. Erin was actually introduced as a female character in 1978, but in 1992, in Legion of Super-Heroes #31, it was revealed that Shvaughn was actually Sean, and that he was born male, but had been taking a futuristic drug called Profem in order to transition into a female form apparently because he was in love with the male superhero Element Lad, who he presumed was straight, but actually turned out to be attracted to Sean just as much as Shvaughn. Again, the lack of knowledge about trans characters shows here, as the Legion writers not only had to use a science fiction drug, Profem, that would cause its user to revert back to their original form once they stopped taking it, but they also seemed to think that trans women are just gay men who want to date straight men.

This “era” actually stretches all the way to recent comics of the 2000s. In 2000, Marvel had two characters who fit into this category. In their Ultimate Universe, the character of Spider-Woman, Jessica Drew, is actually a female clone of Peter Parker who retains some of his memories and has some struggles with her gender as a result, and in their X-Men comics, Courier, a shapeshifting friend of Gambit, became trapped in a female form by the evil Mr. Sinister. Over at DC in the year 2006, the character Erik Storn was given superpowers which manifested in him becoming a female superhero named Amazing Woman. In 2008, the longtime Thor villain, Loki, had taken over a female body (that of Lady Sif) and was portrayed as a woman until Thor #602 in 2009. Loki could possibly go on this list again, as when a younger version of the character got his own title, Loki: Agent of Asgard, in 2013, Al Ewing, the series’ writer said that “Loki is bi and I’ll be touching on that. He’ll shift between genders occasionally as well.” So, Loki could possibly count as transgender, as much as a shapeshifting trickster god can be. 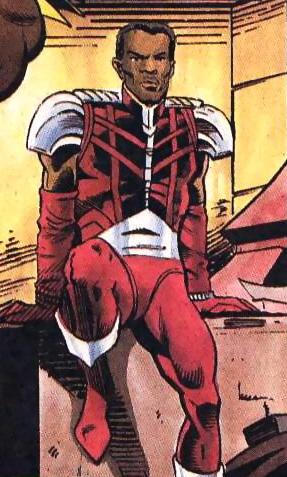 Masquerade in Blood Syndicate #1 with art by Trevor Von Eeden.

A couple of these characters actually might be better suited in other categories, but I’m going to mention them here first. In 1993, Milestone Comics introduced the character Masquerade, a shapeshifter who was a male superhero, but was assigned female at birth. Finally, this conversation wouldn’t be complete without a mention of Xavin, a shapeshifting Skrull from Marvel’s comic about the teenage children of supervillains, Runaways. While Xavin initially shows up as an ostensibly male character, they change to a female form saying “for us changing our gender is no different than changing our hair color” in issue #8 of the series. While this attitude toward gender and ability to shapeshift make Xavin not really representative of the human transgender experience, the character did explore changing gender in a way that was pretty revolutionary for a comic book character.