As you may have heard, there’s a federal election in Canada today.

This is the fourth federal election in the past seven years. A lot of Americans have problems understanding this state of affairs. A lot of Canadians do, too. Briefly, on March 25, the Harper minority government was found in contempt of Parliament — the first time that’s ever happened — and was dissolved the next day. Despite a general sense of voter apathy, over 2 million people turned up to vote at the advance polls over Easter weekend, which is completely unheard of.

According to vote projections as of Sunday evening, a Conservative majority government is possible, but the opposition could go to either the NDP or the Liberals. Here, using data collected by Nanos Research for the Globe and Mail and CTV, and the magic of Excel, is what this looks like: 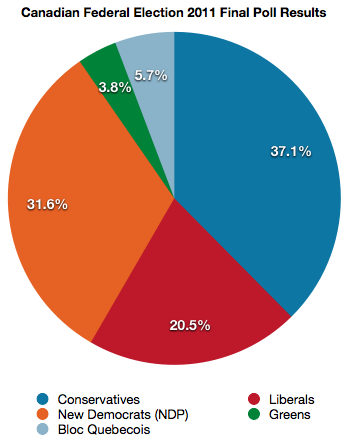 While the Conservatives might end up with either a majority or minority government, there is a pretty good chance that they will still be the government, for the third election in a row. Meanwhile, according to seat projections on April 30, the NDP is expected to win a maximum of twice as many seats as they had in 2008, while the Liberals are expected to lose tragically (compared to their record) but still have a shot at being the official opposition. Let’s break this down:

This dramatization of Harper is from rickmercer.com.

As of the final poll results Sunday evening, the Conservatives have 37.1% support nationally.

The Liberals have been endorsed by very few people. This is one of the first elections in which a national, Toronto-based newspaper hasn’t endorsed the Liberal party, which is sometimes referred to as “Canada’s natural governing party,” which shows you how weird this is. Even those who are voting Liberal are reluctant to actually fully support them, such as Andrew Coyne, the national editor of Maclean’s:

Coyne argues that the Liberal platform, though not ideal, is at least consistent, and that they have a much better record of upholding democratic values. Possibly because their leader didn’t change the official name “the government of Canada” to “the Harper government” (he actually did this). He also argues that neither the NDP nor the Green Party are options, since they both want to increase spending and taxes, have interventionist market policies, and less than ideal personnel. However, as of Sunday evening, the Liberals still have 20.5% support. They’re a third, but a distant third.

The NDP have been endorsed by the Toronto Star; the Torontoist; and the Toronto edition of Now, which also shows you where some of the NDP focus has been this campaign. The NDP did very well following the French language debates, mostly due to a surge in popularity in Quebec, and as of Sunday evening, have 31.6% support. For a party whose jet has been nicknamed “Hipster Air” this is pretty incredible (obviously, they have other merits).

The Green Party has been endorsed by the advocacy group Democracy Watch, but not, apparently, by any national newspapers. Green Party leader Elizabeth May was also excluded from the televised debates, which is especially significant after they received 6.8% of the vote in the 2008 election. Also, it’s just petty. As of Sunday evening, the Greens have 3.8% support.

The Bloc Quebecois have been endorsed by Le Devoir. They currently have 5.8% support, which is down from 10.1% at the beginning of the campaign period. The Bloc really only happens in Quebec, and with a lot of that support shifting towards the NDP, this drop isn’t really a surprise.

Unlike almost everything else in this election.

The results will be announced officially starting after polls close at 9:30 pm in British Columbia, due to laws from the days of radio that believed announcing results from the eastern provinces would influence voting in the western ones. And, Emily Choo is going to liveblog it. Stay tuned! Speaking of Emily Choo, here is what she said about why this election is so weird:

“This election is very neatly straddling the line between “stupid” and “super important.” Mostly it’s stupid because we keep having elections and nothing has changed, and super important because, well, maybe it will.”

Finally. If you have made it this far, and live in Canada, and are not going to vote today because you feel like it won’t make a difference, or because you don’t want to physically go to you polling station, or because you think that by abstaining you’re making some sort of political point, or because it’s raining out, or sunny out, or you can’t find proof of address that isn’t your electoral card from the mail, then I have only this to say to you: you are a tool. Polls are open 9:30 am to 9:30 pm. Use them.

Also, if you want to learn more about the election or have a thing for train-wrecks: here is how the Canadian political system works; here is the CBC guide for the 2011 election; here are the platforms of each party; and here is a site with all the bad things Stephen Harper has done. There are a lot of them.