Sometimes, even often, the internet is full of terrible things. Racist jerks! Rape apologists! Endless pointless Kickstarters! But sometimes, the internet gets its shit together and acts as a space in which really great ideas can form, or in this case, already great ideas can be turned into something double great. Enter The Bechdel Files, a tumblr whose author is re-watching the entire X Files from the pilot on and rating each episode from 1 to 5:

3 – About something besides a man

5 – There are several qualifying conversations or a very long and/or meaningful conversation.

Although it’s not included in the original conception of The Bechdel Test, the author of The Bechdel Files also seems committed to noting the representation of POC characters in the series (apparently the first speaking role for a POC character is Agent Atsumi in Season One’s “Conduit”).

I love The X Files more than I love many things in life. But it is also pretty fucked up sometimes! Although Scully gets to save Mulder more than a few times, she also has to suffer through providing all of the episode’s suspense via being threatened with abduction, murder or violation by aliens plenty of times. Her storylines outside of physical danger usually revolve around cleaning up Mulder’s messes, having no life outside the FBI, and/or being seized  with inexplicable baby fever as a single lady living alone. The representation of people of color on the show is pretty reprehensible, ranging from “none” to “hackneyed and inaccurate versions of ‘traditional fables'” and “super frustrating narratives relying on ‘mystic Native American characters.'” 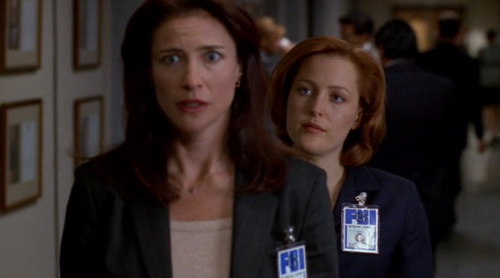 i guess this relationship passes the bechdel test probably sort of? ugh.

Loving something, even when it’s total and unabashed, doesn’t preclude us from criticizing it. And criticizing something doesn’t mean we don’t love it or have to stop loving it — in fact, it often speaks to how much we really and truly care about it, because we want it to be the best thing it can be. So in that spirit, I am going to wait with bated breath for every update on The Bechdel Files, and both look forward to and dread the appearance of agents Fowley and Reyes.