Last Monday, Mexican rock band Molotov announced they would be dropping the word maricón from their song “Puto” during their Jagermeister US tour. In the official statement released on Twitter and Facebook, the band explained they are doing this “as an act of solidarity with Esteban Navarro and the LGBT community.” Esteban Navarro was the victim of a violent homophobic attack in Chile about a month ago. His attackers called him maricón and beat him so severely doctors had to amputate one of his legs after the attack.

The statement comes on the heels of requests from GLAAD for the band to drop the song “Puto” and local LGBT rights groups threatening to protest their shows in the US. This public announcement was released in English alone with no mention of these “acts of solidarity” carrying over to their Latin American tour. 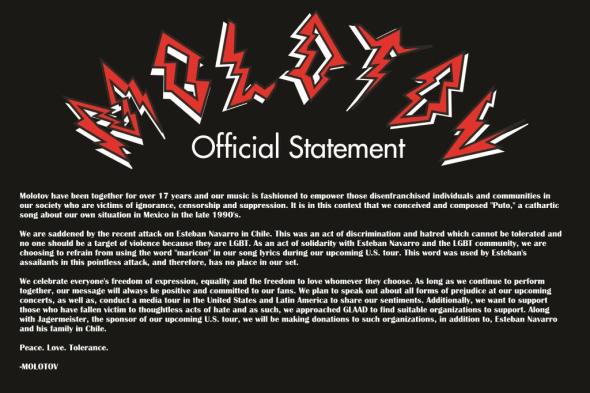 As part of their sudden public stance in support of the LGBT community, Molotov also mentioned in their official statement that they “plan to speak out about all forms of prejudice,” conduct a media tour to share their sentiments and donate to Esteban Navarro, his family and organizations suggested by GLAAD. While their financial commitment shows somewhat deeper support for the cause of LGBT rights, many of us remained skeptical, even before addressing the notion that speaking “about all forms of prejudice” is logistically impossible. In fact, many Spanish-speaking blogs reported the news as Molotov giving in to GLAAD’s public pressure, not a genuine act of solidarity.

Many of us queer Latin@s needed nothing more to know that the gesture was in protection of their ticket sales, not our community.

Maricón is an anti-gay slur with a long history in Latin America. It literally means “big Mary” but it has the same personal and vile punch as “faggot.” In fact, not too long ago we talked about how the Mexican Supreme Court ruled that since it’s a homophobic term, it doesn’t count as protected speech. In this specific instance, Molotov’s dropping maricón feels pretty empty when you consider that its place in the song is as the subject of the chorus matarile al maricón (kill the faggot). They are not dropping that line, or even dropping any of the other homophobic terms in the song (like marica, meaning dyke), so excuse me if I don’t run to buy a ticket for their concert just yet. 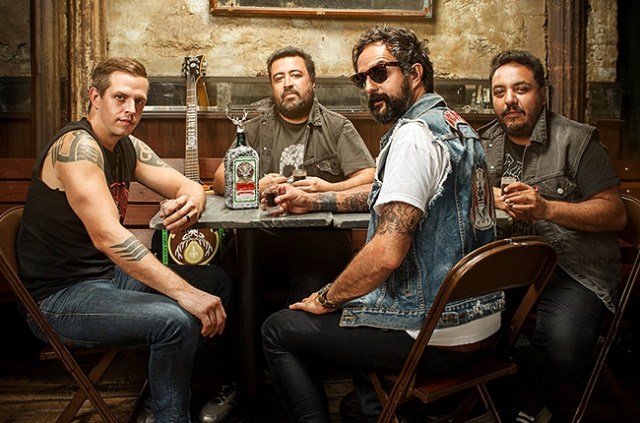 nope. promotional image for their jagermeister tour via ticketmaster

Molotov’s song “Puto” and its cultural significance are a huge deal. The song is a single from Molotov’s first album ¿Dónde Jugarán Las Niñas? and by far one of their most popular songs to date. Released in 1997 as an anti-establishment anthem, “Puto’s” angry lyrics and solid beat made it a quick hit at every party I went to. To this day, it still plays at parties to a crowd singing and jumping in unison — it’s even played at soccer stadiums to get soccer fans riled up. As a queer Latina, once I understood the lyrics the song suddenly went from a rebellious anthem to a threatening chant. The song calls puto anyone who doesn’t jump around, who doesn’t fight, who conforms, who takes the food away from his people, who covers up corruption, who doesn’t do whatever you want, and continues “because you are born a puto and a puto you will die.” The word puto literally means “man-whore,” it’s a slur routinely used against men who have sex with other men. The chorus talks about a killer love, calls for the killing of the faggot and finishes with the question and answer “and what does that son of a bitch want? He wants to cry! He wants to cry!”

Going over the lyrics it makes it particularly hard to feel any kinship with Molotov for dropping just one anti-gay slur from a song full of violent homophobic imagery. The band will not consider dropping or further modifying the song, and bassist Paco Ayala clarified in a interview that he doesn’t understand how words don’t happen in a social vacuum where you can just choose the meaning that fits you best by stating that “[the song] has nothing to do with the gay community, it is written exclusively against cowardly and corrupt politicians.”

How does their use of maricón differ at all from their use of puto in the chorus of the song? Attempting to wrap my head around the reason why Molotov would drop maricón but not puto — if not just getting rid of the song altogether — gives me a serious case of cognitive dissonance that I can’t work through. While GLAAD considers dropping maricón “a good first step,” GLAAD Acting President Dave Montez also noted that “The song still contains the harmful slur ‘puto’ and while the band claims its intent is to use the word as synonymous with ‘coward,’ it shouldn’t be.” Are the members of the band so willfully ignorant that it’ll only take public accounts of a victim of a homophobic attack being called puto during the event for them to remove that word, too? How about marica?

four people I would like to have a chat with

I know this kind of empty gesture isn’t news for any of us living in the US, but I expected more from Molotov, one of the few Latin American bands known for their radical politics and no-fucks-to-give attitude. A 19-year-old teen was beat up in Chile so badly he lost one of his legs: tell me again, how exactly does eliminating the word maricón from one song during their U.S. tour change anything for anyone in South America?

The most disheartening part of it all is that now their tour is underway, reports and videos are surfacing proving Molotov didn’t even follow through on their empty gesture; their lyrics remained unchanged. It’s yet to be seen if GLAAD will say anything about the fact that Molotov’s commitment to our community didn’t last a second longer than it took for me to read their official statement or if yet another public figure gets an ally cookie from its audience for pretending not to be homophobic. Either way, Molotov has offered a helpful lesson in what allyship and solidarity definitely don’t look like.