Your new favorite TV show, Vida, premieres this Sunday, May 6th, wherever you have Starz!

We’ve done this dance a few times now, so you may already know the backstory of Vida. You may remember that the half hour drama is about two Chicana sisters, one of whom is queer, grappling with her mother’s death and the knowledge she was secretly married to a woman. You maybe already heard that the show boasts an all-Latinx, mostly queer, writers room. That it was directed entirely by people of color. That it stars out non-binary actor Ser Anzoategui as the sensitive brown butch heartthrob your late spring is severely lacking.

Today I want to focus our attention on the badass Latina who has made all of that happen: Tanya Saracho. 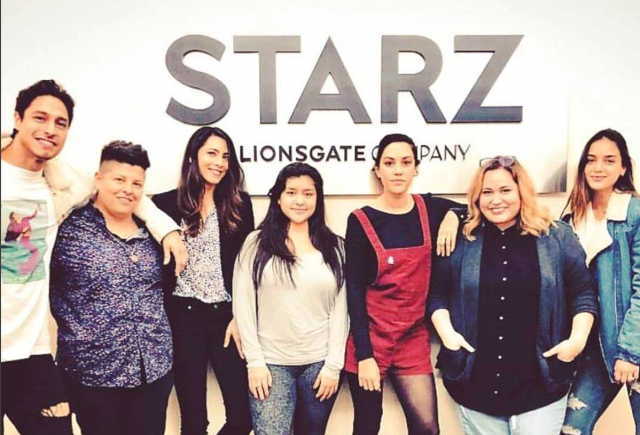 The out queer writer/producer/showrunner, to paraphrase her own Twitter bio, was born in Sinaloa, México, raised on the border, and nurtured in the Chicago theatre scene before moving to Los Angeles and conquering television. As a playwright, Saracho’s won numerous awards — including being named “Best New Playwright” by Chicago Magazine in 2010, one of nine national Latino “Luminarios” by Café Magazine, and receiving the first “Revolucionario” Award in Theater by the National Museum of Mexican Art. While in Chicago, she also co-founded Teatro Luna, an all Latina theatre group. In TV, she’s an alum of the writers rooms for HBO’s Looking and ABC’s How To Get Away with Murder. With Vida, Saracho becomes one of only two Latinas to currently run a half hour television show in the United States, the other being Gloria Calderón Kellet from Autostraddle fan favorite One Day at a Time.

To put it plainly, Tanya Saracho is a boss. She’s brazenly changing the landscape of television for queer women and for Latinx folks. She’s finding new, inventive ways for us to see ourselves and succeed.

Tanya talked with me one on one about being a Latina showrunner in Hollywood, the nitty gritty of how the television sausage gets made, and the ways that having an all-Latinx writers room molded Vida into the best show it could be.

Carmen: Autostraddle’s been trying to help build buzz around Vida —

Tanya: I know! I’ve been following it and forwarding it and reposting it.

Carmen: — Hahaha, yeah, we’re really excited. Now that we are so close to the show’s premiere, what would you like our audience of queer feminists and non-binary folks to know about their next new obsession, Vida?

Tanya: That it’s HERE! And that we exist. And that we’re portraying it the way we are. That’s really important to me. That it’s — I hate the word authentic, because it’s like “authentic Mexican food” or whatever — but it’s as close to true life as you can get on TV. You know?

And you guys get to take in the big tapestry, but we cared about even the littlest threads. You know, like the way the altar was set. I literally dressed that altar myself. Or, what they wear. Or, the way that the house is decorated — the fact that you have to have a Last Supper clock on the wall. Because, you just do! And I don’t even think you get to see it (from the audience), but, it was important that it was there! It’s important that there were doilies and lace curtains, all the small things that make up of our world. I tried to do it right.

Carmen: As a Latina who keeps an altar in my house — I have kept one by my bed since I was 16 — I want to thank you for those details.

Carmen: When you say that you dressed the altar yourself, I understand completely. I tried to catch as many of those small details as I could, and I think that they make a difference. That leads to my next question. One of the things that’s really excited us about Vida is the production team behind it. Could you describe the process of assembling your team? Did you have specific ways of looking for such dynamic writers and directors?

As you mentioned earlier, it’s a Latinx writers room that’s mostly queer women. You also had all people of color directors. There’s a common adage of, “oh that can’t be done.” And yet, I see women out there making it happen. I see you out there doing it.

 Tanya: Yes! And that is some bullshit. [Chuckles] I’m sorry for the language, but that is just some bullshit. Because I did it! And we did it so fast. We had two weeks to find writers, and that included closing their deals. So essentially, we had one week.

Now, I started reading people ahead of time. I read 152 people. But, in earnest we roughly had only a week. I reached out. I was keeping my eye out. I got in contact with a Latina TV writers’ group. I read all of them.

Also? I have some friends that are Latina TV writers, and they are brilliant.

I told them, “Let me consider your stuff.” At first they were like, “Oh no! You don’t have to hire me!” But, why not? I come from a theatre background, and in theatre we always work with our friends. Not out of nepotism or anything, but because they’re good. And anyway, Hollywood is built on networks and “who you know.” We don’t have that. We don’t have those structures.

Starz still had to approve anyone I hire. I couldn’t just say “oh this is my dear friend.” [The network] not only had to react well to the reading material, but also to the in-person meeting. All of the people we hired for the first season were the right people for that season. I could have picked a ton more! I only had a limited number of spots. So, when people say that “they can’t find anyone” — I don’t know what they are talking about.

I will say — the pool is wide, not deep. And that is systemic, right? Because we haven’t had access and opportunity in this industry. But, we’re here.

Carmen: We’re on the phone — so you can’t see me right now — but I am nodding so hard, I think my head is going to fall off. I agree one thousand percent! There was this tweet that went viral after Beyoncé’s Coachella concert. I’m paraphrasing, but it basically said, “Whenever somebody tells you that they can’t find people of color to do jobs, remember that Beyoncé found —

Carmen: You’ve spoken briefly about your time in the theatre world, and I wanted to talk you about your writing. In doing research for this interview, I came across a quote of yours that I absolutely love! You once said, “We need to keep writing because our stories are worth it.” I put it on a post-it next to my computer. Thank you.

In addition to your award winning work as a playwright, you have been in a few writers rooms that our readers will immediately recognize — including Looking and How To Get Away With Murder. Did having a queer and Latinx writing room for Vida make the difference you hoped for in crafting the scripts?

Tanya: Yes! No other writers room could have written as intimate a season as we did. I just don’t buy it. Early on, a couple of people from the “dominant culture” who work in the industry — you know, who I’m talking about, white people — they said, “Oh, don’t do that. Don’t limit yourself. Get the best writers.”

And I was like, “Wait no — motherfucker, why can’t the best writers also happen to be Latinx!”

Who run the world? #VidaSTARZ

Carmen: Before we wrap up the interview, let’s talk more about the central, delicate relationship of Vida’s two queer protagonists.

During Vida’s South by Southwest panel, you rhetorically asked “Where are the brown butches?” I love that you answered it by writing a brown butch into your show. I wondered if you could talk with me about Eddy, who I know our readers are going to fall in love with. And also Emma! She’s also going to capture interests and hearts. She starts off icy, but over the course of season one we get to pull back her layers.

Tanya: Absolutely! To start — we are only getting to know them over 12 days. The first season is just 12 days in timeline.

At first you see an Emma who’s completely resistant to the wife of her mother. It’s not about homophobia — because, you know, Emma’s queer herself. It’s not that. It’s about the fact that her mother left her out of another big part of her life. So, by proxy Eddy sort of becomes Vidalia, the mother, for Emma.

Over the course of the season, Emma has a few revelations. She realizes that, “Hold on. It was so brave of my mother to walk hand-in-hand with her wife.” She’s still mad at her mom, but she comes to see Eddy in a different light. Everything she had against her mother, she laid on Eddy. Eventually, that falls away.

It’s about Emma not having her mother. And needing to — what’s the phrase in English for reclamar? She needs to ask Vidalia, “Why? Why did you do these things?” She needs to rail at her. But her mom’s not there. She only has Eddy — who is such a sweetheart.

Eddy… she’s the heart of the show.

And, you know what? We’re just getting started! 12 days is nothing.

 Vida premieres this Sunday, May 6th, on Starz. We also ran an interview with Ser Anzoategui (Eddy) earlier this week. Check out the trailer for Vida below, and follow Tanya Saracho on Twitter and Instagram to keep up with her throughout season one!