Pretty much the only thing that will wake me up at a decent hour on a Sunday morning is the prospect of brunch. This past Sunday, after rubbing the crust out of my eyes and peeling my body off the sheets in the sweltering heat, I managed to see that my group chat decided we were going to Peaches in Bed Stuy. I have definitely expressed my general desire to make Peaches my bae, so I was all, “Everybody on your bikes, see you in 10. Don’t talk to me until I’m drinking a Bloody Mary.”

I didn’t really think about what I should wear because I was so preoccupied with how I was about to make love to some cheesy grits. So, I threw my hair up in a messy bun, slapped on some sweatpants and started biking. About three minutes in, I realized that between my leather bike seat, corduroy sweatpants and spandex underwear, I had created a perfect storm. The scrunchy bit at the bottom of my sweatpants was trapping the heat in, and I began considering whether or not anybody would notice if I just biked around in my underpants. Thankfully by this time I had already arrived.

Usually the wait for a table at Peaches can be measured in one million glasses of water, but we arrived just in time to beat the after-church crowd, so we only waited about ten minutes. It is during this ten minutes that I saw one woman waiting for a table wearing pin curls and a pencil skirt. Another gentleman was wearing a three piece pinstripe suit and a fedora. I was wearing last night’s whiskey sour and SWEATPANTS. Is it hot in here? It feels hot in here. You know what will probably cool me down? A Bloody Mary. Yeah, definitely that. 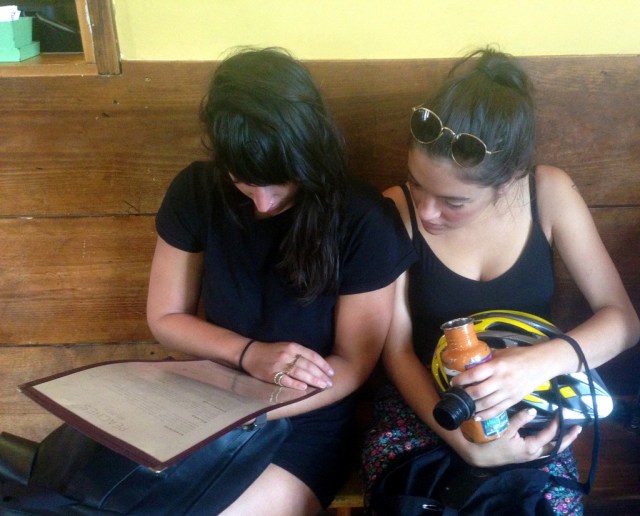 Service at Peaches is… Southern. Let’s call it that, because otherwise I’d have to pull out my impatient New Yorker face get all “where’s my damn coffee!” And I don’t want to do that. The sluggish service gives me, Nicole, and Quinn enough time to have a well-rounded brunch discussion. We started off with the perils of STDs and trading gyno recommendations, which somehow led to embarrassing exes, and finished on drunk. Nicole had the Jim Cade Breakfast (french toast, eggs, potatoes, toast, miracles), Quinn had the Crab Cake Sandwich (on brioche with a side of fries covered in creole seasoning), I stuck with the standard fried eggs and potatoes with bacon and grits, because it was the cheapest option and I was saving room for that Bloody Mary. Speaking of which, as if I haven’t plugged this restaurant enough, Peaches makes the best Bloody Mary I have ever had in my life. Hands down, no contest, just the best, extra spicy. The only thing I don’t think anybody has figured out is how to stop those little pieces of horseradish from getting stuck in the straw, impeding Bloody Mary consumption. Maybe we could use those giant bubble tea straws? That might work. 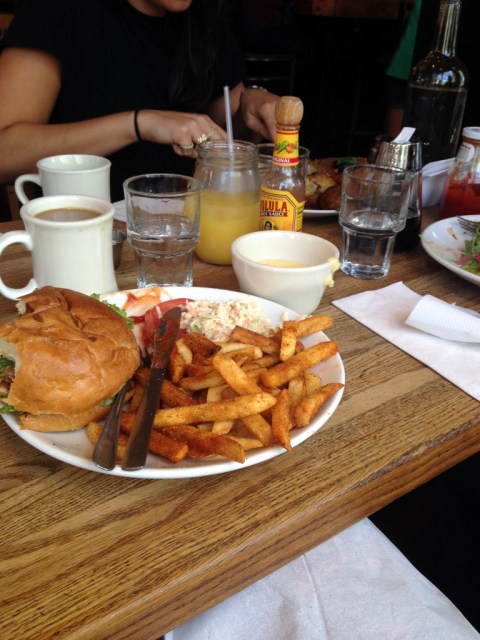 At this point there was a thin layer of moisture covering every inch of my body. I have this hereditary predisposition for shoveling food into my mouth like its my last meal on earth, so I usually get a little moist when I eat, but between the food, the hot sauce, and those goddamn sweatpants, I was drenched. I suggested that maybe I needed to go buy a pair of shorts. Maybe we should go thrift shopping. Quinn was like no thanks that meal was an adventure, leaving me and Nicole to walk my bike from Bed Stuy to Bushwick which, it turns out, takes a lot longer than you would think, especially when you are wearing sweatpants and vodka and tabasco are seeping from your pores.

I tried my best to navigate using my inner compass because I’m a native Brooklynite and these hipsters don’t know shit. But it turns out my inner compass needs to be re-calibrated, so we got sort of very lost, and had to sit down at the least relaxing cafe underneath the Myrtle Broadway overpass to drink smoothies and send snapchats. Nicole introduced me to her parody lifestyle brand, Mostly You, which you should all follow on instagram. It had me cracking up, but then again I was maybe having a heat stroke. 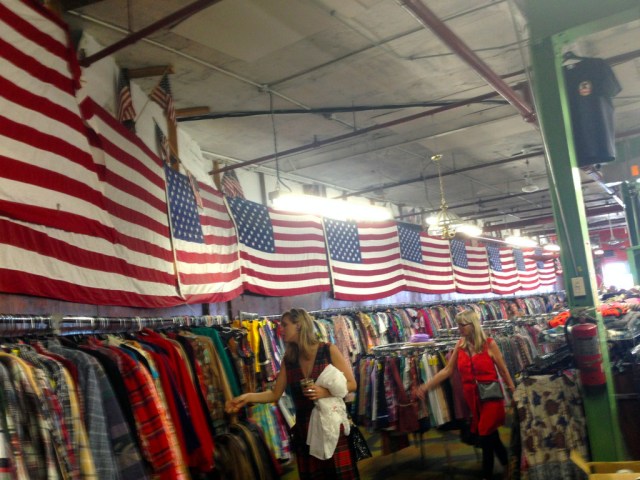 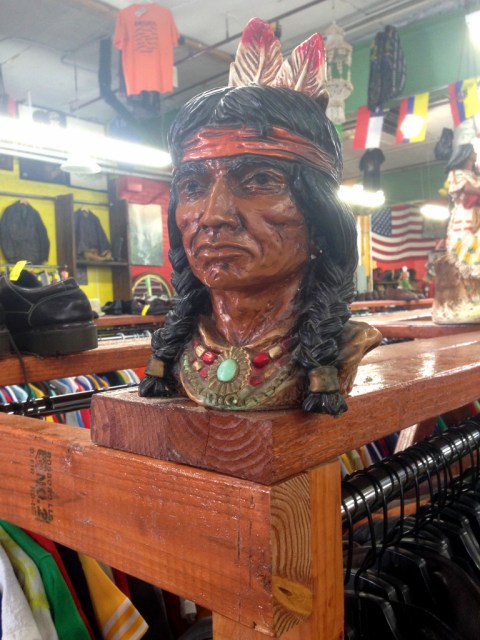 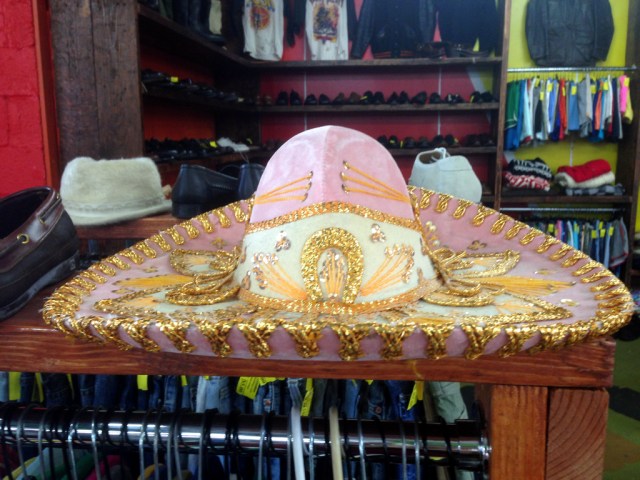 When we did finally arrive at Urban Jungle Vintage on Knickerbocker ave., I was immediately struck by the abundance of American flags plastering the walls. There were also a plethora of not-so-questionably racist artifacts decorating the store. I don’t know if any of this stuff was for sale, but it definitely went hand-in-hand with the horrendous florescent lighting and poor curation of items. Most of the clothing appeared to have belonged to one person’s hoarder mother between 1968 and 1989. As my hangover set in, I began to question whether this was a good idea at all. Of course, Nicole immediately spots the only two killer items in the store, both baseball jerseys. Behold: 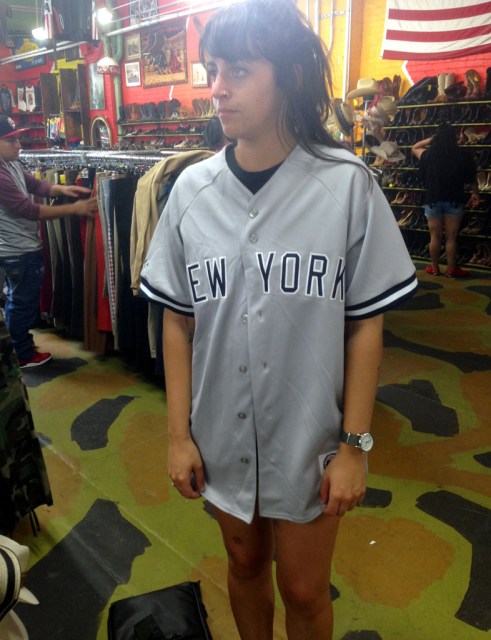 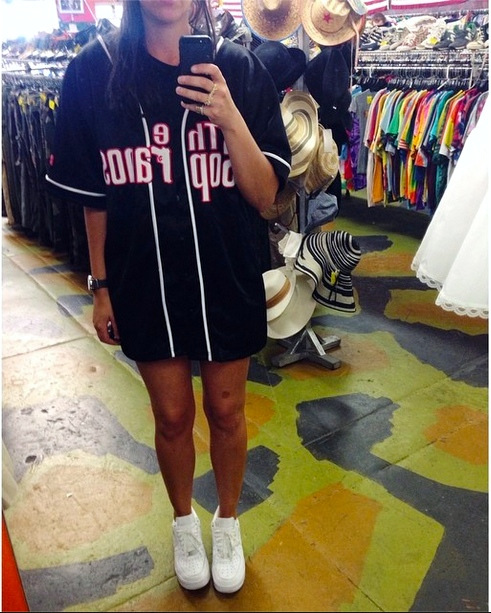 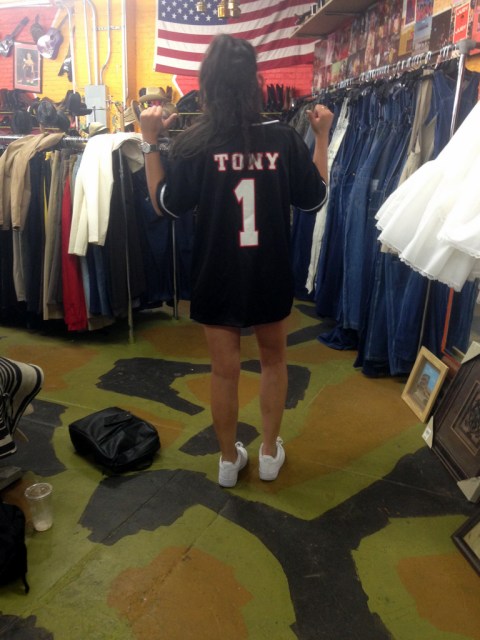 So, what’s up with upholstered vests? Was there some sort of fabric shortage in America at some point? Did the government command every citizen to tear down their drapes and dismantle their decorative pillows so that everybody could have ugly vests? I swear, I was buried in a sea of upholstered vests. Nicole threw me a lifeline and pulled me out so we could try on all of the polyester stretchy shirts, which was actually not fun at all. One of the particularly offensive shirts made the hair on my arms stand up on end, or would have if I hadn’t impulsively decided to get my arms waxed on Friday (it was free, and I don’t regret it). 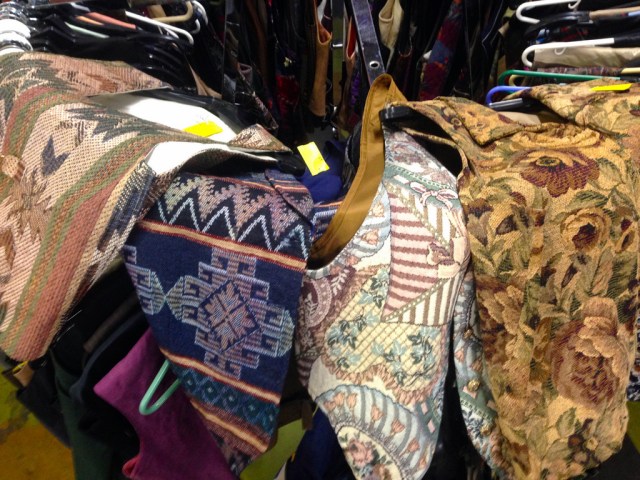 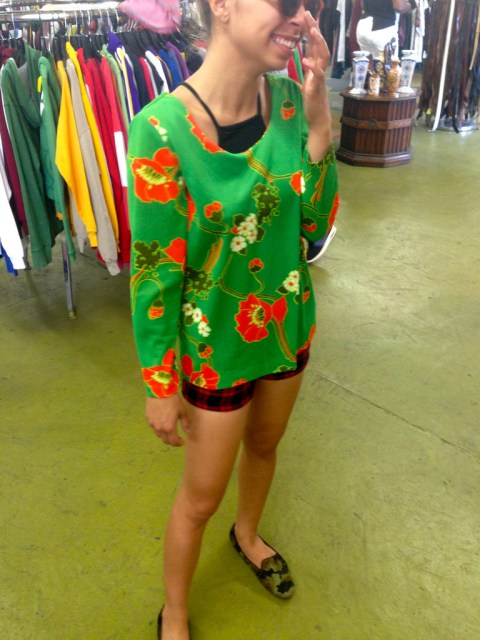 In a last ditch effort to find a pair of shorts I came upon the most confusing clothing item I have ever seen: a pair of thick, flannel, Abercrombie daisy dukes. Upon what occasion does one need to keep their butt cheeks exceptionally warm and itchy, while exposing maximum leg? I thought back to the girls from UMass I used to see teetering around Amherst in the dead of winter, practically naked, arms linked to remain upright, wearing a nice jacket of miller lite and pinnacle vodka. They could have used these shorts, but the cameltoe I incurred from the them actually outweighed their impracticality.

I left empty-handed. My sweatpants were damp. My hangover was real. I used the last ounce of energy in my poor, dehydrated body to book it back home and fall into a deep slumber. There I dreamt of a cool breeze passing over my naked body while eating creole fries on a sandy white beach. Next time I think I’ll opt for the mimosa and some flowy pants.