Anyone else walk out of the last 10 seconds of the mid-season finale of The Fosters last night? Just me? I literally screamed, “No! No! No!” at the TV and stormed out to the kitchen and then I came back in and wailed, “Whhhhhhyyyyyyyy?!” because this was apparently the worst thing that happened to me all day. But we’ll get to that later…

If you have been watching Season 2 of The Fosters, you know what an emotional roller coaster it has been. If you haven’t been watching, here’s the Top 6 Things You Might Have Missed This Season:

1) Stef Looks Really Hot in a Toolbelt and Makes Some Sort of Butch Home Video, Presumably For Lena To Watch While Alone In Her Tent On Her Camping Trip

Let’s just get this out of the way — because this moment out-lesbianed all the lesbian moments on this lesbian show. While Lena is on a school camping trip (with Jude and other students), Stef decides it’s time to fix the sink. For some reason, she dons a toolbelt for this occasion, which I don’t think is a thing people actually do when fixing faucets in their own home. Do they? I feel like no one does this. Anyway, I guess she is really into making this hot video for her wife. Maybe it’s, like, a role-playing thing? Of course, she botches the plumbing job. Actual video script: “How hot is your mama? In her hot tool belt… using power tools… fixing things? Look at that pipe! Oh, crap!” Rewind. Watch again. Rewind. Watch again. 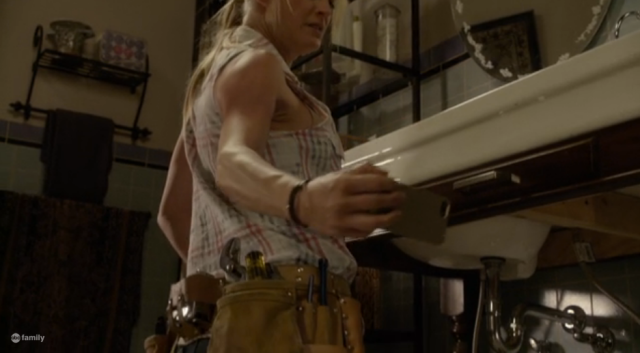 Just cleaning out the pipes…

Lena and Stef face a very personal and difficult decision when Lena’s doctor tells Lena she has a life-threatening case of preeclampsia. Lena is 20 weeks pregnant with her first pregnancy, which she wants so much that I could feel her feelings through the TV screen. I was over the moon about this episode, even though it was super super sad. Why? The Fosters team treated Lena’s decision with the honesty and sensitivity it deserves, showing that abortion is a truly personal decision that people make for many reasons. They didn’t sensationalize it, nor did they gloss over the feelings that Stef and Lena and their kids went through as they both supported Lena and grieved the pregnancy loss. Honest portrayals of abortion decisions are really important as anti-abortion conservatives introduce hundreds of restrictions and bans on abortion across the county. 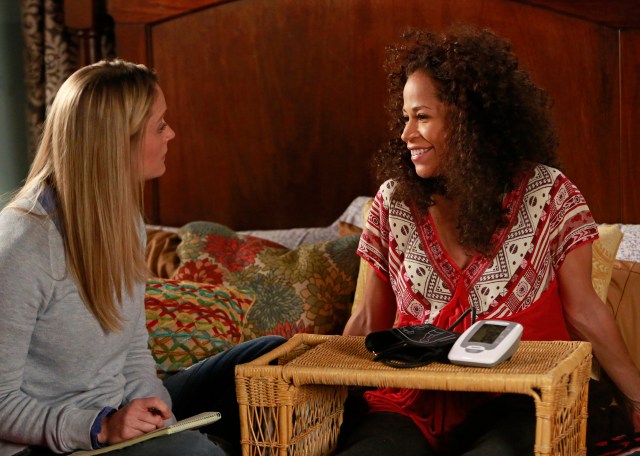 Because abortion is an LGBTQ issue, too.

Another happy-sad favorite moment that totally won me over as a fan of this show is when Brandon opens up to Lena about his guilt over “having sex” with Mike’s girlfriend, Dani, and his fear that telling will get everyone in trouble. Lena and Stef call this what it is — statutory rape. Mike is not so sure because he’s the worst ever. He and Stef have a heated argument where he mansplains like a douche and she totally schools him. In the end, not only is it validated that Dani “having sex” with a very-drunk Brandon is, in fact, statutory rape, but Dani is arrested. Bonus points for not only naming statutory rape for what it is, but for portraying a situation where a woman is the perpetrator and a boy is the survivor, a situation that is rarely talked about and, I’m sure, resonates with many male survivors of sexual assault. After watching Glee and Pretty Little Liars parade around sexual relationships between minors and adults like it is totally OK, this was such a glorious affirmation that a TV show can get it right sometimes.

In the same episode, Callie begins taking the next step sexually with Wyatt and suddenly has a panic attack and has to stop. She comes to realize her panic attack was caused by being sexually assaulted by her former foster brother. When she finally tells Wyatt about this in a later episode, he is so totally cool with taking it slow. Go Wyallie! Then he goes off and punches the dude who raped Callie, which is less cool, and she lets him know that it’s not OK and I guess they are kind of on a break or something? 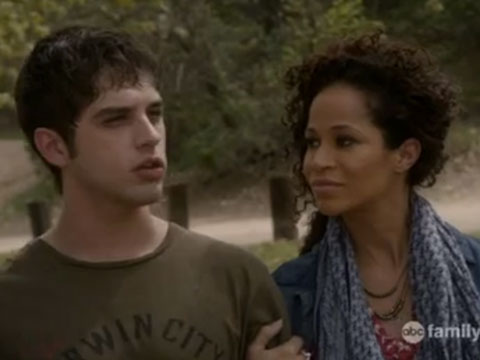 Brandon tells Lena what happened and she believes him and takes steps to protect him. Well done, Fosters, well done.

Mariana joins the cheerleading team and has lots of feelings about race, passing privilege, hanging with the cool girls and whatnots. She has some friend drama. She dyes her hair blond. She questions mean girl stuff. She does some mean girl stuff. She goes to a Mexican street festival with a date where she has all sorts of confusing feelings about her cultural heritage and her blond hair and her complicated relationship with her bio mom.

Meanwhile, Jesus, on the cusp of his latest breakup, has sex with some random girl in the garage of his house at a party. This girl, of course, ends up being a friend of Mariana’s on the cheerleading team because Jesus can only sleep with Mariana’s friends. He is kind of a dick for a while, leading her on for the sexy times, then goes from zero-to-sixty and becomes attached at the hip to her and gets her name tattooed on his side. Really, Jesus, get it together.

Mariana and Jesus’ bio mom, Ana, wants to see them to make amends — Ana is in AA — which eventually happens and is both heartbreaking and cathartic. (Sidenote: Mike is apparently living with Ana now because he is an adult child that also consistently makes poor life choices.) After the visit with Ana, Lena finds Mariana crying in her bedroom. In one of the best scenes of the season finale, Mariana asks Lena why she wanted to have a biological kid and wishes that she could share DNA with Lena instead of Ana. Lena assures her that DNA doesn’t make a family and we all cry together a little. 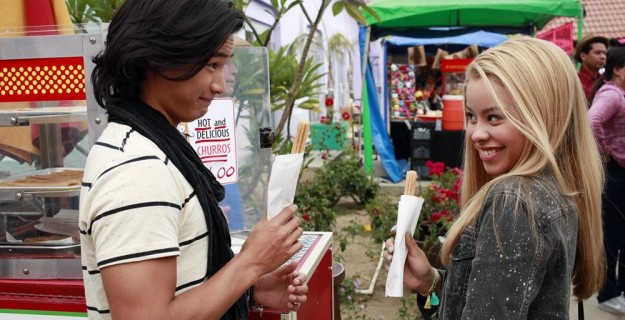 Jude is, like, this close to coming out. As you know, Jude has a major straight boy crush on Connor. However, Connor is interested in girls. That doesn’t stop him from being a really good friend to Jude and he just almost maybe kisses Jude on the lips during a game of spin the bottle at the Fosters’ house. (Way to walk in at the wrong time, Callie.) In fact, Connor and Jude are kind of becoming BFFs. Unfortunately, Connor’s dad is a total homophobic jerkface and, because he thinks Jude is gay, makes a rule that Connor can’t stay over at Jude’s house. Connor’s dad is also clearly emotionally and physically abusive. Connor comes to school with a black eye and Jude tells Lena, who calls Connor’s father in. They proceed to get into a shouting match about Connor and Jude, which results in Lena accusing Connor’s dad of being a bully and quitting her job when the school won’t take action against Connor’s dad. Probably should have checked with your wife on that one, Lena, since you have five kids and a house and seem to live paycheck-to-paycheck, but whatever, you do you.

Meanwhile, Jude admits in the mid-season finale that he and Connor “did something” in their shared tent during the camping trip. Yeah, we need the deets on that. Did they pick up where that spin the bottle game left off? We’ll have to wait until January 2015 to find out. 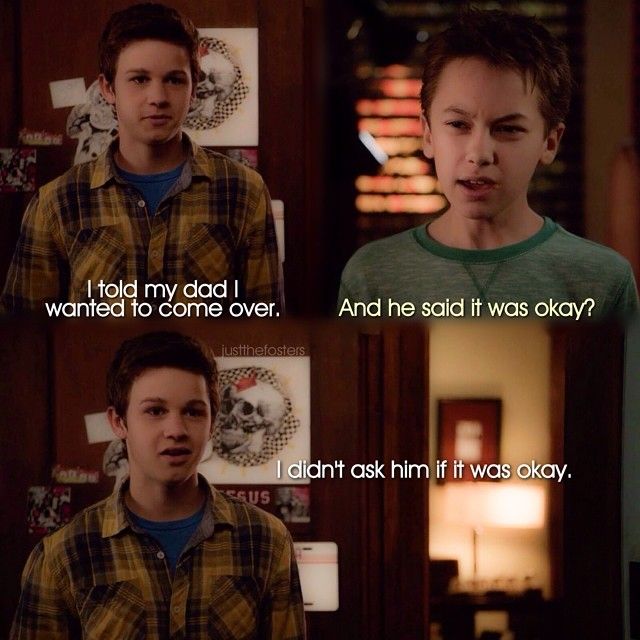 Callie finds out her biological father is not who she thought it was. She needs this newly identified bio dad to sign away his parental rights in order to be adopted by the Fosters. He had no idea that she existed, either. She meets her bio dad, Robert, his wife, and her half-sister, Sophia. They are super rich, like really really really rich. Callie’s bio dad and sister all kind of fall in love with her, especially Sophia, who is a selfish and spoiled little rich girl that really wants Callie to be her best friend. (Great casting — Bailee Madison looks like Maia Mitchell in a way that is almost eerie.) Robert offers to put aside a college fund for Callie and obviously wishes he’d known about her and raised her himself. Jude is scared about losing Callie to her bio dad and sister, so Callie introduces him to them. Callie and Jude join the bio fam for a fancy boat trip on their fancy boat and it’s kind of awkward.

Robert finally agrees to sign the papers and does so… OR DOES HE?! He does. But Sophia intercepts them and rips them up because she is a little brat. Then, at the very last second, Robert decides that he can’t sign the papers again because he loves Callie SO MUCH. So much that he can’t do this one thing for her even though it is what she wants and she is, like, pretty old for a kid, so what, is he just going to buy her a pony and try to make up for all those years they didn’t know each other and if he does love her so much why would he want her to be miserable? I don’t know. We’re well into Season 2 and Callie is back at square one with the adoption thing, so that’s fun. 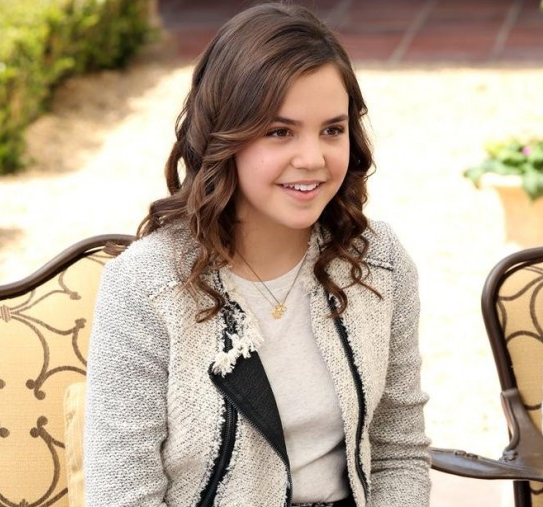 Callie’s world is crumbling down at the end of the mid-season finale. She runs out of Robert’s house at the end of their fight about the papers and runs into Brandon (whose band is playing at the fundraiser that Robert and his wife are hosting for Girls United because their house burned down because Becca stole Dev’s drugs and accidentally set a fire in the basement, which is a surprise because Dev thought Callie stole the drugs and no one has a place to live except maybe Cole because he got into the LGBT house and oh yeah, Brandon plays in an angsty teen band now and — uh, you know, there’s a lot of other stuff that happened, but I can’t recap a whole season in one post, so you’re just going to have to trust me here).

No. Nope. No. Seriously? (via jacobsfoster.tumblr.com)

Is this the Season 1 finale? Because it sure feels like it. Excuse me while I swallow this barf in my mouth.

KaeLyn is a 40-year-old hard femme bisexual dino mom. You can typically find her binge-watching TV, standing somewhere with a mic or a sign in her hand, over-caffeinating herself, or just generally doing too many things at once. She lives in Upstate NY with her spouse, a baby T. rex, a scaredy cat, an elderly betta fish, and two rascally rabbits. You can buy her debut book, Girls Resist! A Guide to Activism, Leadership, and Starting a Revolution if you want to, if you feel like it, if that's a thing that interests you or whatever.

KaeLyn has written 231 articles for us.