From August 8-10, I got the chance to attend my third Otakon, the USA’s second-largest anime convention, in Baltimore, MD. The gathering of 30,000+ anime fans from around the world meant a large list of panels, premieres, guest appearances and other activities to whet the otaku appetite for three days. For me, it was a chance to meet many of my online friends in-person for the first time, and to observe how things have changed since my first two Otakon experiences. It’s interesting to see once-popular series fall by the wayside, while others that used to be rare are now everywhere.

One of the latter is Sailor Moon, the first anime I ever saw, and one I’ve written about extensively for Autostraddle as a lifelong fan. Two years ago, there was one fan-panel on the series, the usual string of cosplays and a few items in the dealers’ room, but not much else. The anime had been out-of-print in the U.S. for nearly a decade, so only a few nostalgic die-hards held on. Now, with the reboot anime out and Viz’s re-release of the original on its way, Sailor Moon is everywhere. The convention was packed with Sailor Moon events, from screenings of the new episodes to signings with both the old and new English voice actors, to fan panels about their love for the show. 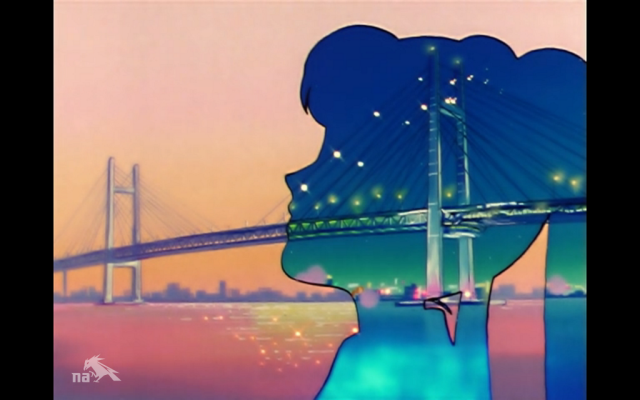 On Saturday at noon, the Baltimore Convention Center opened its largest video room to a screening of four episodes of the new Sailor Moon dub. They showed the first two episodes of the series, plus Ami/Sailor Mercury’s and Rei/Sailor Mars’s respective debut episodes. While the first two were shown last month at LA’s Anime Expo – when the dub cast was first announced – Ami and Rei’s episodes had never before been screened. It was an exciting event packed with eager fans, singing along to the theme songs and cheering as each new character, transformation and attack sequence was revealed. And before the main show, Viz played the trailer for their re-release, which displayed prominently the queer characters and romances which had been cut from the original dub. Those shots received the biggest cheers from the audience.

The new dub is faithful to a fault, translating it as closely as it can and choosing voice actors who match the spirit and even sometimes tone of the original Japanese ones. Stephanie Sheh’s Usagi, in particular, mimicked the Japanese very closely, while still adding enough of her original charm to keep Usagi relatable and funny in English. The humor was where the script deviated the most from the Japanese one, since that’s an easy thing to lose in translation. But it usually kept close to the spirit of those original episodes, with the exception of some added gags (for example, when Usagi’s friend Umino said he heard that Ami’s I.Q. was “over 9000!”, and Usagi insulting Mamoru for wearing “stupid purple pleated pants.”) It was extremely funny, and kept me and the rest of the audience laughing much harder than I ever would have expected.

I’d felt unsure about the casting choices in listening to the clips Viz made available on YouTube, but my confidence was restored by listening to the full episodes. While some of the choices may sound jarring for those who grew up with the original dub, they make sense if you’re familiar with the Japanese version, or with other installments in the humongous Sailor Moon franchise. It’s particularly exciting to hear fresh new takes on characters where the original dub was a bit off – like an Ami/Mercury who actually sounds like a preteen girl, and not an overly-formal adult woman. On the other hand, roles that the old dub got right sound pretty much the same here; I was actually surprised that antagonist Queen Beryl wasn’t the same actor as the DiC dub. The only casting choices I wasn’t too into were Michelle Ruff’s very flat Luna, and Todd Haberkorn as the villainous Jadeite. But the flatness could end up working for the black cat, a mentor character who exists to guide Usagi and keep her out of trouble. (She is to Sailor Moon what Giles was to Buffy the Vampire Slayer.) And Haberkorn’s Jadeite’s main fault is just sounding too much like all his other anime roles – and not a big deal when his is an unsympathetic supporting character who doesn’t last too long. 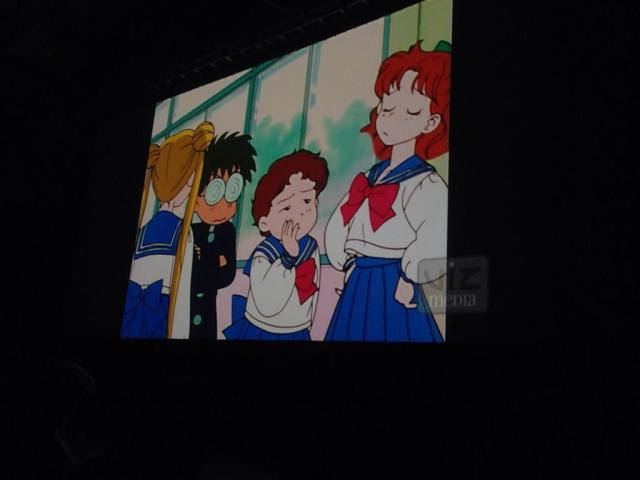 A moment from Episode 7, during the premiere.

After the panel, there was a Q&A session where fans could get to know Sheh and Tuxedo Mask’s new voice actor, Robbie Daymond, as well as Viz director of marketing Charlene Ingram. I also attended a press conference the previous night for the three of them, where I got the chance to ask them some questions, along with other press representatives (you can read the full press conference transcript here at Toonzone). Sheh is a veteran anime voice actor, appearing in otaku-popular series like Sword Art Online, K-ON! and Fate/Stay Night, but Daymond is completely new to anime roles (though he has an extensive resume in live-action and other cartoons). So the fans had plenty of questions for them about their different experiences with voicing Sailor Moon. 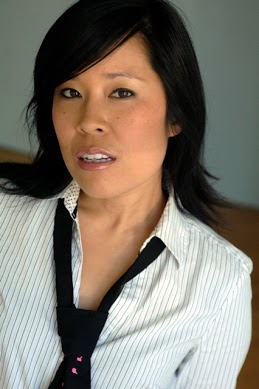 One of the first questions in the fan panel was about each of their introductions to the Sailor Moon franchise. Sheh said she couldn’t remember “but it was everywhere,” while Daymond shared a story of discovering it on Toonami during college, and obsessing over it with his guy friends. They were also asked about their favorite scenes to do, and Sheh talked about how fun it was to record Usagi singing badly on-purpose when she tries out for a talent contest with her friend Naru. When asked about the essentials they try to communicate with their characters, Daymond said that since his character’s role was “limited in the beginning,” stressing the comedy in his interactions with Usagi was important to build the relationship. Sheh said the most important thing for her was to keep Usagi “grounded” and be aware of how “screechy” the character could be. “I don’t want to top myself and go higher and higher.” The actors gave a good idea of what it was like to prepare for such iconic characters, and how much fun it was to play them.

At the press conference and the fan panel alike, there were numerous questions for Ingram about releases of other Sailor Moon properties – including the old, censored English dub; the new Sailor Moon Crystal reboot anime, and even the live-action musicals. Ingram said that they couldn’t release the old dub because it was owned by a different company and the master tapes are largely incomplete, and added that it was important to have a new dub because “Sailor Moon doesn’t need to be censored. It’s a beautiful story.” She didn’t dismiss the possibility of dubbing Sailor Moon Crystal but said they wouldn’t know until the anime was finished with production in its current Japanese release (which English-speakers can find subtitlted at Crunchyroll and Hulu). With other parts of the franchise, she said they would consider it if there was enough interest and the rights were available, but so far there are no plans. I asked if there were any chance it might be on TV; she said they’d “love to see it” there but would have to wait for a broadcaster’s interest, and it would remain uncensored except for time. Ingram also mentioned how exciting it was to have the show streaming on Hulu, where it’s always near the top. “It’s a true pop-culture phenomenon,” she said. 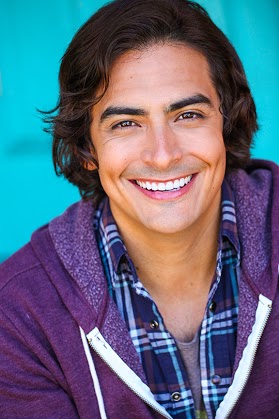 Most fun was finding out how Sheh and Daymond felt about their characters and others in the show. I asked them what they felt they had in common with their characters, and if they thought they were more like other characters in the show. Daymond joked that coming from a theater background, he could relate to Tuxedo Mask because wearing the cape, throwing roses, “being in the background” and “having an alter-ego” was “easy” for him. Sheh said that while she thought she was like her character Usagi in being “clumsy” and that she was “boy-crazy” when she was younger, she also thought she had aspects of some of the other characters. She said she could be “bossy like Rei,” and “book-smart like Ami,” sharing stories of how people were always surprised at how high her grades were when she was “street-dumb,” or not good at “logical life stuff.” She went on to talk about how it’s to pick just one because they’re never just “one thing.” About Sailor Jupiter/Makoto, she said: “She’s a tomboy, but also boy-crazy… They’re all complicated girls.” Sheh thought this was what made the girls of Sailor Moon such appealing characters, that they all had multiple facets.

Overall, the entire experience made me extremely pumped for the new release of Sailor Moon. It’s exciting to have one of my favorite series, one that contributed so much to my early feminist awakening, finally in capable hands who respect its queer elements. And it’s even better to find out that the acting and writing are also improved from the original English dub. If you can’t wait, either, Viz’s re-release of the first 24 episodes drops in November, and can be pre-ordered in both DVD and Blu-ray on Amazon. In the meantime, if you’re in the United States you can find subtitled episodes of the series streaming on Hulu and Viz’s own website NeonAlley, with new episodes released every Monday.

Titans from Attack on Titan

Jean Kirschstein from Attack on Titan

Butterfree, Metapod and Caterpie from Pokemon