Welcome back! It’s been a minute but here we are, with a recap of Supergirl episode 608, aka the beginning of the end, the start of the final stretch of episodes. Ever. :sob:

That might sound sarcastic, but I’m serious. I know we’ve had our ups and downs with this show, but it has been very important to me over the years for many reasons and I am genuinely sad to see it go.

But let’s not get ahead of ourselves.

Previously on Supergirl, Lex banished Kara to the Phantom Zone and when the SuperFriends tried to get her back they released some Phantoms into National City, so everyone was experiencing the cold nightmares the Phantoms provide. Kara found her dad, who she previously thought was dead, and eventually the Superfriends vanquished the Phantoms and got their Supergirl back.

The episode begins with Brainy trying to Mission Impossible his way back to the Tower with a black box while Dreamer is in his ear warning him that the clock is ticking and Lena saying that the “Golden Sleeper is stirring.”

When he gets back, he shows a pristine Welcome Home, Kara donut cake and Nia admits that actually Kara is still sleeping under the sun lamps but they were afraid if they didn’t tell Brainy it was a rush job he’d get distracted and eat the cake.

When Kara does start to wake up from under the sunlamps, she has a nightmare about the Phantoms but as soon as her eyes snap open, Alex is there. 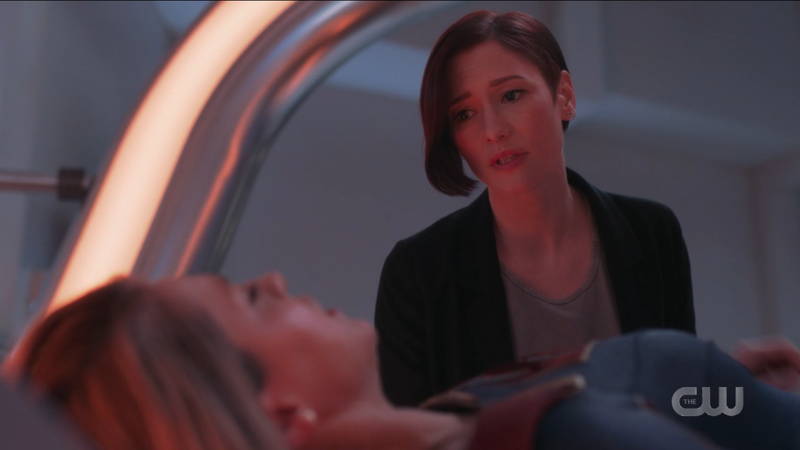 My kingdom for Alex Danvers to be there when I wake up from a nightmare.

Alex reassures her, “We’ve got you, I’ve got you.” Kara tries to lighten the mood, joking how she never wants to see anything Phantom-related for a good long time, including Operas or Star Wars movies. Maybe not even Scooby Doo, just in case. Alex smiles at her; she’s so glad her baby sister is home. 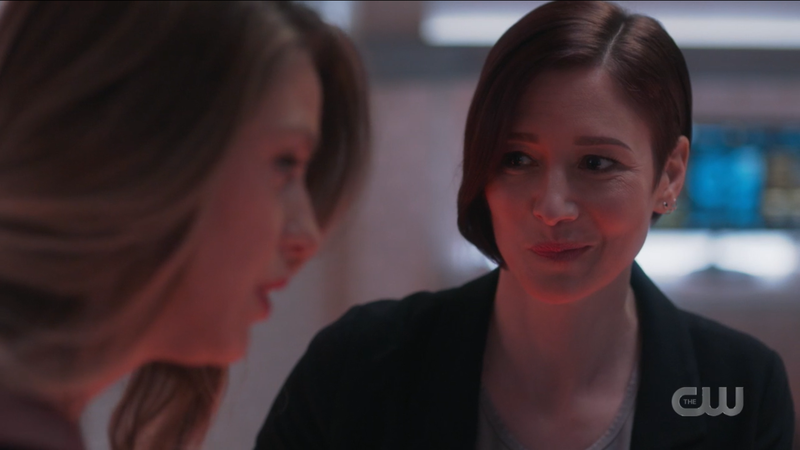 Listen I know Melissa probably needs a break but HEAR ME OUT: Sentinel/Guardian spinoff. I’m just not ready to say goodbye.

Kara asks for another hug and Alex happily obliges. And then she leads her to her proper welcome home party. She gets a hug from Space Dad and Brainy, from her little sis Nia…and she hugs Lena. 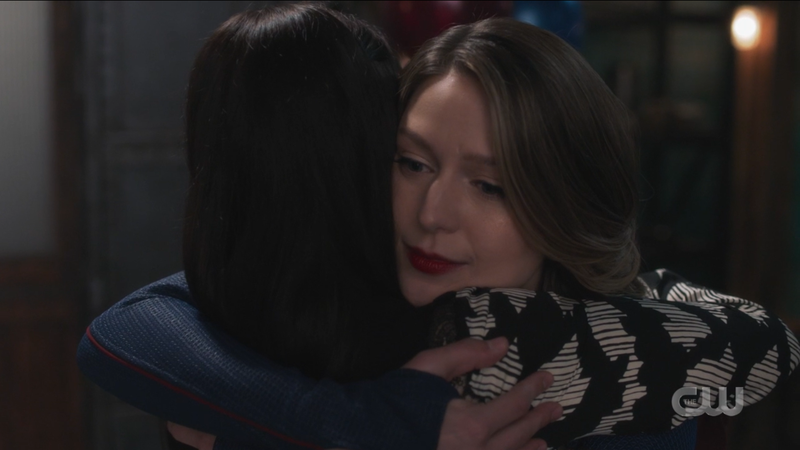 How close to accidentally cracking a rib do you think Kara got?

Kara squeezes her tight and says, and I quote, “It’s only because you’re on the team that I’m here.” Tears spill down Lena’s cheeks and she smiles. 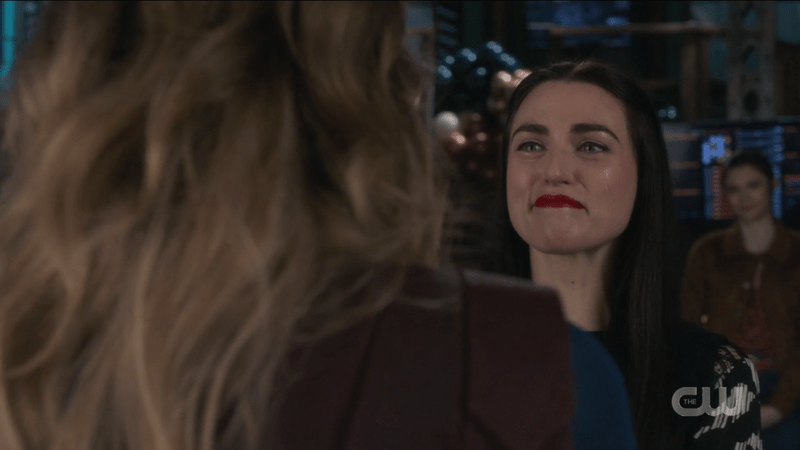 Kelly couldn’t be there because that scene alone filled their gay quota for the episode, but Kara understands. Zor-El is there too, up from his nap, and he’s excited to go to Argo and be reunited with his wife, but not before he learns a little more about what his daughter’s day-to-day life is like.

They call him Uncle Archie from Midvale and take him to CatCo because they learned nothing from the Mike situation, and Kara is nervous to be back but Nia covered for her while she was gone so she doesn’t think Andrea will suspect anything strange. And in fact, Andrea is pretty happy to see her again. 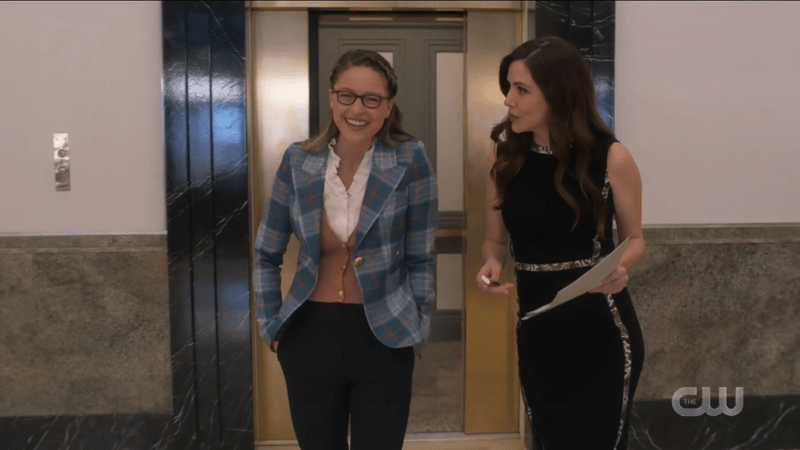 What in the bisexual pirate tiktok business casual outfit is this?

Kara lies her way out of Nia’s lie, saying that she was indeed undercover for a story but the story fell through…for reasons. Andrea is disappointed but is still glad to have her Pulitzer winner back. She calls a staff meeting and says that CatCo is #8 on the Top 10 list and she wants to move them to #1 by next month because she’s been watching a lot of The Bold Type and she’s pretty sure that’s how journalism works.

Andrea wants Kara to use her Supergirl connection to get a Phantom exclusive. She says Phantom enough to make the Girl of Steel shake a little, especially since she had no idea Phantoms attacked National City.

She goes over to Nia, looking horrified; she blames herself for this. The Phantoms got loose because her team was trying to save her. And she knows exactly the kind of hell the people of National City went through because of it. Nia tries to pivot that blame to Lex, where it belongs, but Kara’s already in her head about it. 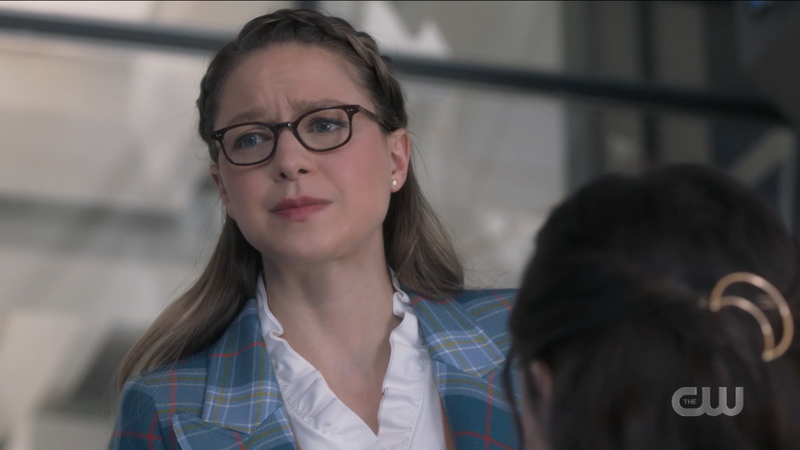 Once she gets those lil eyebrow crinkles there’s no turning back.

William interrupts the pity party, and Kara apologizes, but he gets it; he’s been undercover too. And also, as a blessing to all of us, he has a girlfriend! I can’t be sure but I think I’ll like William a hell of a lot more when he goes back to just being the coworker Kara has to jump through hoops to hide her Super identity from without the added layer of him trying to court her. Kara is genuinely happy for him, because she’s the best of us.

Nia is watching over Uncle Archie out on the balcony (a staple of National City architecture), who is a little overwhelmed by his new powers. Nia gets what it’s like to receive powers with no instruction manual. As they chat, they notice a satellite hurtling toward them and Nia is excited; now Papa Zor-El will REALLY see what Kara’s life is like. 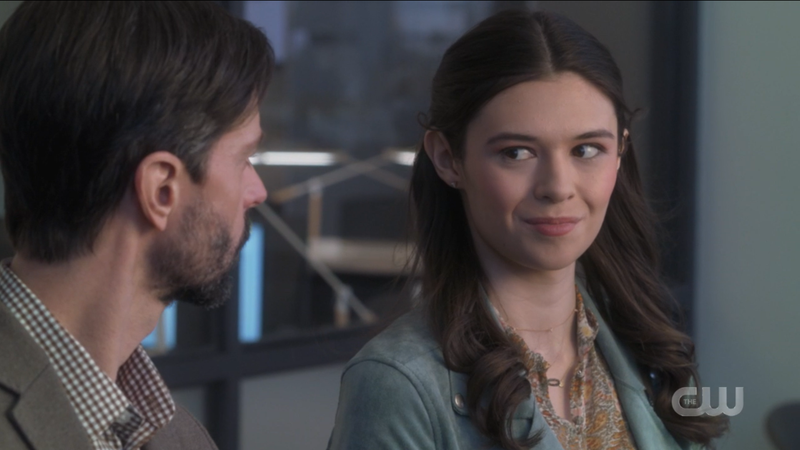 Yow that Despicable Me scene that’s Agnes just like rage screaming about how cute her stuffed unicorn is? That’s the kind of rage-joy I feel about how cute Nia is.

They suit up and fly up to stop the satellite, and Kara is just so happy. She went from being the second-to-last Kryptonian to finding her aunt, her mom, her dad, and an entire Kryptonian City alive and well. Kara gleefully hurls the satellite back into the atmosphere and Papa Zor-El uses his new freeze breath to put out a fire the satellite caused on a trash barge.

When they’re done, Kara goes back to work and tells Andrea that she wants to change her story from the Phantoms to the trash barge and how it’s all Lex’s fault because it was full of DEO wreckage. Andrea likes this story pitch but decides to give it to William because Kara is still the only one with a direct line to Supergirl. Out of options, Kara relents. 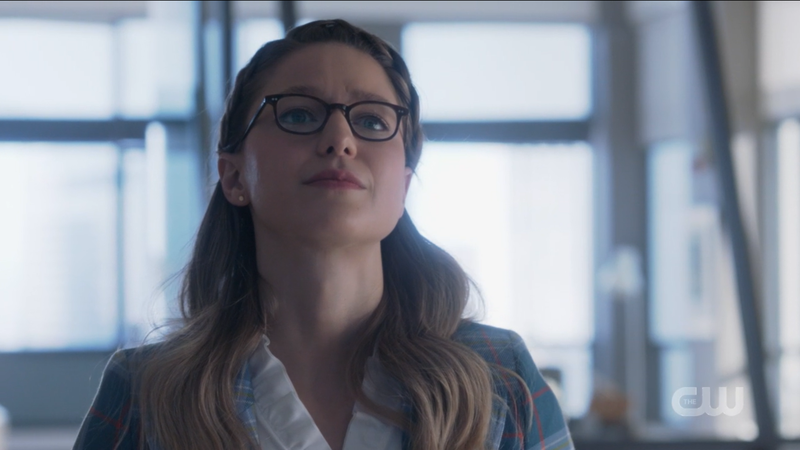 “This is actually going to make me supremely uncomfortable but telling you that would make me uncomfortable too so I’ll just go suffer in silence instead” is a little too relatable, thanks.

Because the truth is, she can’t tell anyone how traumatized she was by the Phantoms. So she has to go through this list of victims, talk to the people whose pain she blames herself for while also exposing herself to triggers. It’s something we don’t often get to see, how these ordeals actually affect superheroes. But of course it does. Especially someone with as big a heart as Kara’s.

They head back to the Tower where Zor-El expresses concern for the environment. Everyone is like “yeah welcome to the party” but Zor-El is seriously concerned. The oceans going to shit was the tipping point for Krypton and Zor-El couldn’t save that planet, so he is desperate to help this one. He’s hoping Kara still has her pod (the one that got knocked off course) to see if the plans for Krypton are in it but she has a better idea: the Fortress of Solitude. Even though it’s hard for her to be there, she’s happy to show her dad their little slice of Krypton on Earth.

Nia finds Lena working in the Tower, and Lena says she just got off the phone with Kara; she knows she’s at the Fortress. Just a lil update. 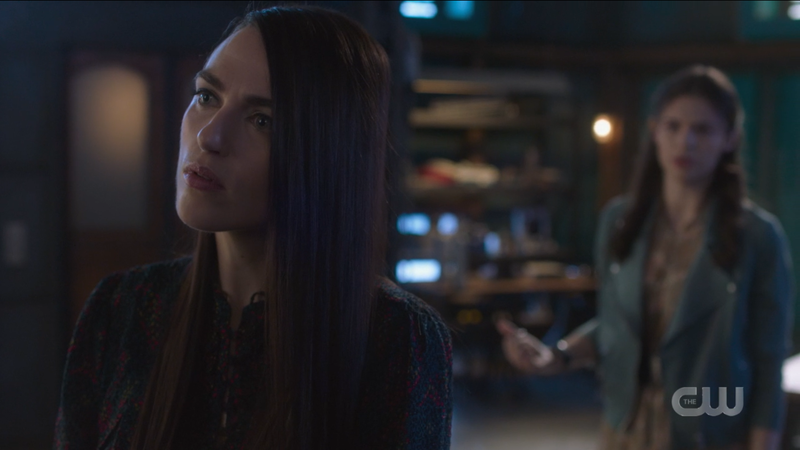 “Play it cool, Lena, don’t let Nia see that you’re over the goddamn moon that Kara looped you in but not her.” – Lena’s inner monologue, probably

Nia sort of sadly says she’s happy for Kara, but Lena understands how Nia feels. They’re both genuinely happy for Kara, but also they know that their dead moms aren’t going to magically reappear the way Kara’s parents have. Nia says what she’s supposed to say, “It’s great that they get to share that,” and Lena knows Nia means it, but she also understands the jealousy that comes with it. 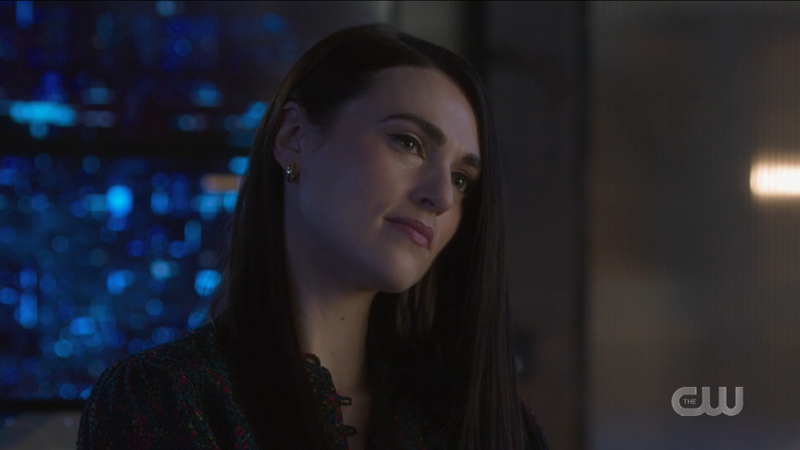 No one has ever loved this woman the way she deserved, from the day she lost her mother til the day Kara told her she was Supergirl.

Nia admits that it’s kind of hard to watch. She’d kill for just one more day with her mom. Lena says she’d give anything to just know her mother. Nia asks if Lena ended up conquering her Phantom nightmare about her mom and Lena quirks an eyebrow at her; didn’t they all conquer their nightmares? Nia brushes off the fact that she super didn’t and Lena says that she let the Kelpie overtake her and then faced the memory of her mother. She finally stopped blaming her wee baby self for not saving her mother. 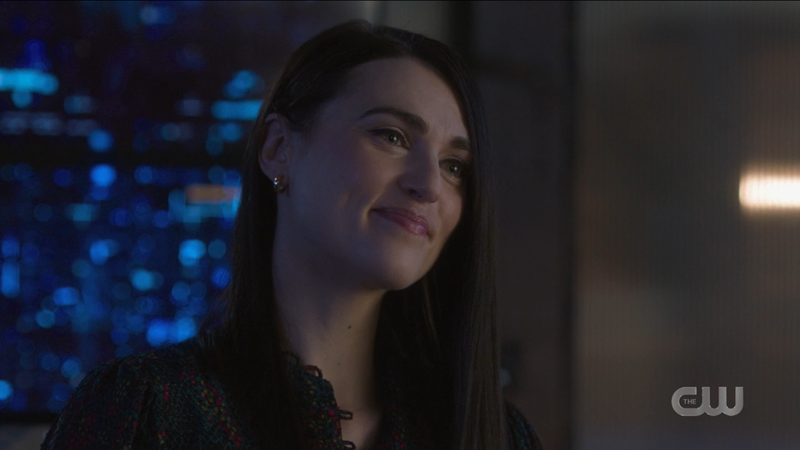 Every once in a while during Lena/Nia scenes I remember that Katie and Nicole are best friends in real life and I become GIDDY.

Lena knows there’s more for her to learn about her mom and Nia reassures her that she’ll figure it out. After all, she’s the smartest woman in National City.

Zor-El is looking over the destruction of Krypton and feeling bereft; but Kara calls him a hero. He feels bad about yeeting her from her home, but she assures him that she found a new one. And he is determined to not let Kara’s new home befall the same fate as her old one. 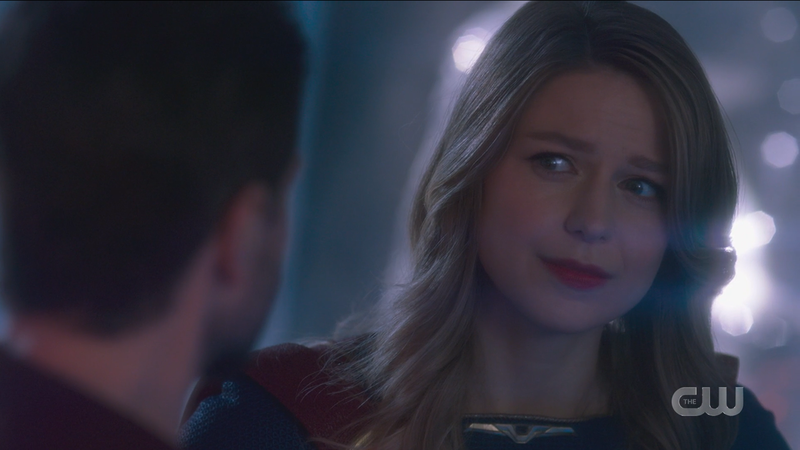 I keep trying to think of clever captions for these screenshots but then I see Melissa’s face and my stupid lizard brain just yells HANG IT IN THE LOUVRE on a loop.

When the team reconvenes at the Tower, Zor-El says he has an idea for how to clean up Earth’s oceans. Everyone tries to explain that things are more complicated than he’s making it sound, but he’s a man on a mission. He brings out an upgraded version of the little robot Kal-Ex that looks a bit like Alpha from the Mighty Morphin Power Rangers.