G’day and welcome to this recap of Supergirl episode 607, Fear Knot.

Previously on Supergirl, Kara got trapped in the Phantom Zone where she found her Kryptonian dad and a 5th dimensional imp named Nyxly, Team Super captured some Phantoms that got loose, and Brainy and Nia went back in time to Midvale to get Kara’s DNA so they could go on a mission to save Supergirl.

After two delightful Midvale episodes, we finally pop back into the Phantom Zone to check on Kara, who is dragging her dad away from the explosion she caused during her fight with Nyxly. As soon as they’re out of the danger of burning to a crisp, they find themselves in the wake of a phantom that scratches Kara, causing her eyes to cloud over in fear. She starts to feel hopeless, and loses the will to keep going. Her dad tries to pull her back to her feet, to tell her that her Earth family is surely looking for her, but she’s suddenly convinced they’re all going to die and it’s going to be all her fault. Melissa did amazing in this episode but if we never see Sad Kara for the rest of the season I’d be okay with that.

Back on Earth, Nia and Brainy return from the past with Kara’s blood to find that Brainy missed the mark a little again (sounds like he needs some time travel lessons from AvaLance) and they were gone for three days. The good news is, Team Super was busy in their absence and everyone – Kelly, Lena, EVERYONE – is ready to go to the Phantom Zone immediately. (Except M’gann who is patrolling National City.)

Brainy is about to finish repairs on his Legion ship but one of the things J’onn has been busy doing is turning the Tower into a spaceship. Alex. is. THRILLED. 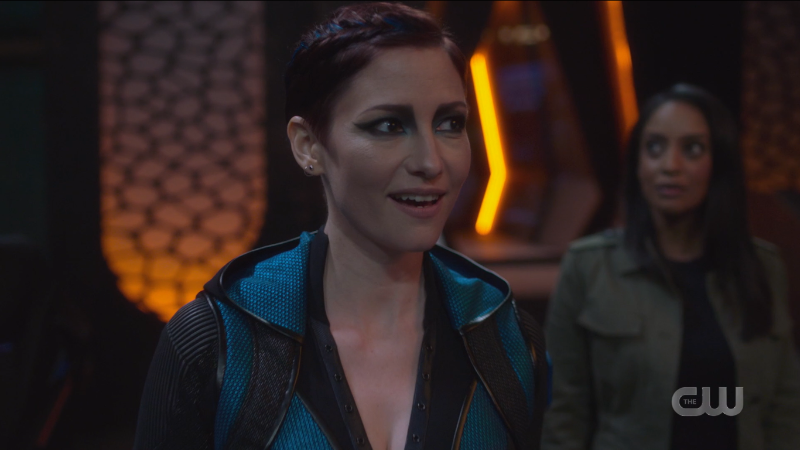 The Towership feels like a good way for Alex to meet up with Ava…just saying.

Kelly hops onto the controls, using Lena’s q-waves, and the DNA Nia and Brainy got, and the Tower J’onn commandeered, and under Alex’s leadership. Truly a team effort as they head for the Phantom Zone. J’onn warns them that when they get there, they might be plagued with their worst nightmares; think Dementors that create Boggarts. So Kelly uses her therapist skills to give them grounding techniques any of us who have had panic attacks or a need to walk back anxiety fainting already knew: Ground yourself. Name things you can see, touch, hear, smell. Things you know beyond a shadow of a doubt are real. 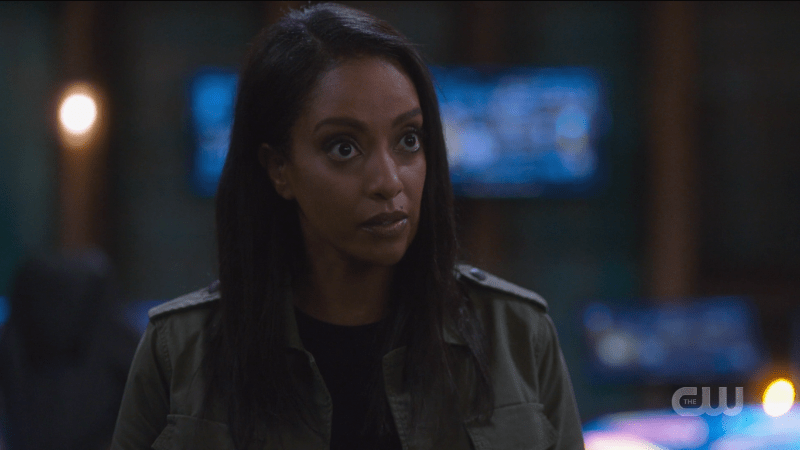 Lena gets it right away because she’s super smart and probably has suffered her fair share of waking nightmares. Alex is worried about Kelly coming on this mission with them, but Kelly is ready. She knows how important Kara is to Alex, and she’ll do anything for Alex. 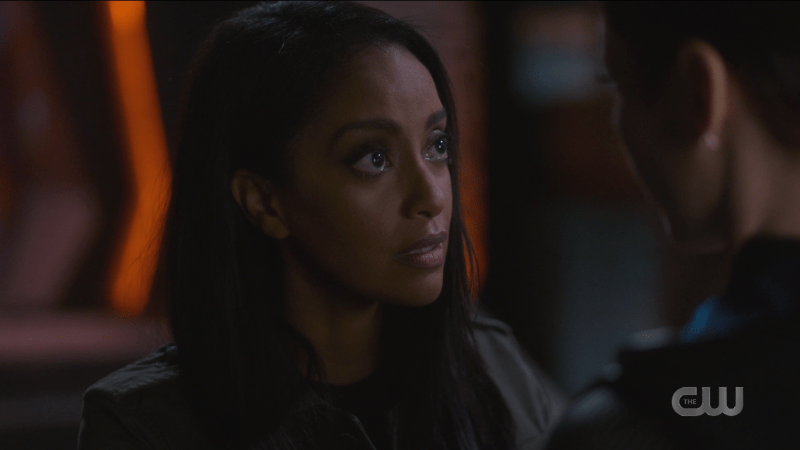 Kelly and Lena being fully integrated into the team makes me wish there was one (1) more season.

They plan for the scenario where they show up and Kara doesn’t believe the rescue is real, which leads J’onn and Alex to fight about who should be the one on the ground when they get to the Phandom Zone. J’onn continues to be his Season Six pushy self and says Alex needs to be a leader to the rest while he’s on the ground, and she’s annoyed by this presumption but doesn’t press the issue further…for now.

They all have their roles; Dreamer will be on Phantom lookout, Lena made a sun grenade that will recharge Supergirl and scatter the Phantoms, but there’s only one so they have to time it just right, then Brainy will be the getaway driver. Plus, they only have so much power, so the countdown is on.

J’onn asks Lena to do the honors, and she sets them on course to find Supergirl. “I didn’t wear a lipstick shirt and a VEST because I DON’T mean business, c’mon.”

They do their final checks and hit a bit of a turbulence and a power surge but then it seems they’re in the clear.

Once the turbulence settles, Alex works up the nerve to demand J’onn let her come with her on the ground mission. J’onn barks that he doesn’t want to risk losing both Alex and Kara but Alex wants to do whatever it takes to protect her baby sister. Before they have to officially make that decision, they get an alert that the Phantom broke out of containment so they go down to fight it. They swiftly get it back in its cage, and J’onn is about to tell Alex she’s earned the right to come with him to save Kara when he realizes she’s been scratched by the Phantom, and if she doesn’t get to the med bay soon, she could become one.

Alex, desperate to save her sister, kicks J’onn into a containment cell of his own, pulls up her hood, and heads back to the rest of the team. When Phantoms start banging up against the side of the Towership, Brainy realizes that Alex has been scratched and her transformation is attracting more Phantoms like New York City mice to exposed packets of Ramen.

Alex starts to panic that she made the wrong choice. And I think this is where I should have realized this was Alex’s nightmare scenario playing out, but I’ll admit I didn’t see it yet at this point. But of course Alex’s worst fear is her making a leadership decision that hurts more than it helps. That the consequence will be that she not only doesn’t save her sister but she also loses Kelly and the rest of her found family, too. So in this scenario, Alex realizes the only way to save everyone is to go out into the Phantom Zone and act as bait while she waits for the transformation to take hold. Then the clock reverts and we’re back to final checks again. Nia compliments Lena on her ability to harness the literal sun, and Lena is impressed by Nia’s ability to harness dream energy. And then they both bond over losing their moms and missing them dearly. We love a good trauma bond.

They’re both so, so grateful for their new found family, but it does always feel like a little part of them is missing. But Lena has a book of folk tales from her mother, and Nia has her mother’s powers, so they’ll always be connected to the women they lost on some level. 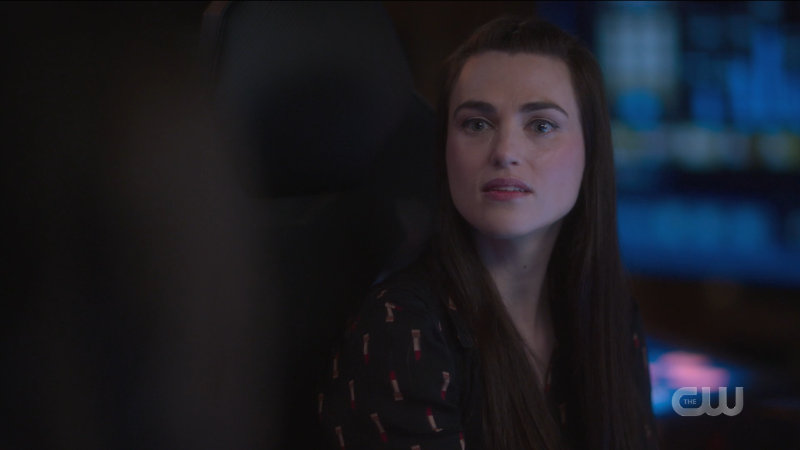 Knowing how close Katie and Nicole are in real life made these Lena/Nia scenes even more wonderful than they were at face value, which was already pretty wonderful.

Then the power surge happens again, and Lena notices something wrong with the coolant and goes to check on it. When she gets there, she sees a monster made of water rise up and traps it in the control room and calls for backup, but no one answers. When she gets back to the main room, most of her friends were killed by what Lena recognizes now as a kelpie; only Nia is still alive. Lena remembers her mother drowning and feeling so guilty for not doing anything to save her, and reading her mom’s storybooks and specifically torturing herself with the one about the kelpie. Nia wants to know how to defeat a kelpie, but before Lena can give her the answer, the kelpie appears and drowns Nia, right in front of Lena. I just want one episode of Lena and the crew having a nice chill game night.

But Lena is very clever and when she realizes this is a nightmare scenario, she also realizes it’s probably literally a nightmare. So she takes Kelly’s advice and starts listing things that are real. She starts with physical things, like the Martian steel she’s standing on, but she then goes into the things that really matter, like her friends. Her friends! There was a while she had distanced herself from considering them her friends, so the fact that they’re her touchstone now in this moment of sheer terror is very important and lovely.