KD LANG: Are you following the Olympics? Are you obsessed with the kd lang cover of “Hallelujah?” Originally featured on her album Recollection (buy the original Hallelujah single from Amazon here or from itunes here. You can also get the special 2010 Winter Olympics version on itunes. It’s number 20 on the itunes charts today, Number one is obviously We are the We are the World 25 for Haiti, featuring every famous person ever.

Bisexual singer Nelly Furtado and openly gay fiddler Canadian Ashley MacIsaac also performed at the opening ceremonies. Alas there was no Tegan & Sara, but Sarah McLachlan (another favorite of the gays), did perform.
Did you cry when kd lang sang? Yeah us too. Queerty has made a video (these things keep disappearing from youtube, probs ’cause we’re gay):

Obviously Hallelujah, written and originally performed by Leonard Cohen, is one of the world’s most heartbreaking & beautiful songs ever; perhaps its most sorrowful version is Jeff Buckley’s (especially in retrospect because later he killed himself) [ETA: Okay, apparently he drowned and it was ruled an accident.] You probably have heard Rufus Wainwright’s cover. kd Lang also performed her cover at the 2005 Juno Awards. Justin Timberlake performed Hallelujah for the Hope for Haiti Album.

From disboards: “Hallelujah” is often used in television shows and movies during scenes involving death or heartbreak. It has been featured in movies as diverse as Basquiat, The Edukators (Die fetten Jahre sind vorbei), A Lot Like Love, Shrek (covered by John Cale in the movie and by Rufus Wainwright on the soundtrack), St. Ralph, Deliver Us from Evil, Kissed by Winter, Barfuss, Lord of War and When Night is Falling, and TV series such as Holby City, House, M.D., Falcon Beach, The L Word, The O.C. (twice by Jeff Buckley, once by Imogen Heap), Hollyoaks, The West Wing, Scrubs, Without a Trace, Cold Case, Criminal Minds, ER, The Shield, Nip/Tuck, Crossing Jordan, Drama and Nicole, Rescue Me, LAX, Lost, Roswell, Ugly Betty, Numb3rs and Nearly Famous. It was also used in the Third Watch and Without a Trace episodes dealing with the 9/11 events. “Hallelujah” was played at the closing of NBC‘s Dateline on April 17, 2007, covering the Virginia Tech massacre. During the playing of the song, a montage of photographs regarding the events of the tragedy was displayed.

HOPE FOR HAITI: Speaking of the Haiti song, here’s that!

“The “kiss-in” had originally been planned to take place in front of Notre Dame Cathedral but Christian Fundamentalist websites called in to “defend their faith against this provocation” using ‘aids bags’, ‘sodomites’ and other homophobic insults. The websites called for a violent response so the organizers decided to change the location to place Saint Michel in the nearby Latin Quarter, after the police strongly encouraged it, saying they could not protect them in case of trouble. The kiss in was held peacefully at St-Michel but some gays went to Notre Dame anyway and witnesses are saying 200 Christian activists were expecting them, and after they started kissing, they were attacked with motorbike helmets and kicked.”

CRAZY: Adam Lambert, Kris Allen and Allison Iraheta do ‘Crazy’ at the Rock My Town concert. If these three wanted to just like start their own rock band and make songs together I’m not sure I’d be entirely opposed to that idea. People never do bands anymore. It’s always like one person. I think bands are interesting. Like The Beatles. They were good.

MUPPETS! Florence Henderson & The Muppets do “Happy Together,” via @buzzfeed:

ELLEN: The NYT has finally figured out that Ellen is a total badass, and has written an article about how she is giving Oprah a run for her money in popularity. “Why? Because her hourlong show is upbeat and inspirational, two traits that appeal to daytime’s core female audience, according to the studies, which TV executives rely on as they make decisions. Equally important, the 52-year-old Ms. DeGeneres is seen as relaxed and relatable. Already, she is seen as more likable than Ms. Winfrey, according to the Q Scores Company, which measures consumer preferences.” We could have told them that. (@nytimes) 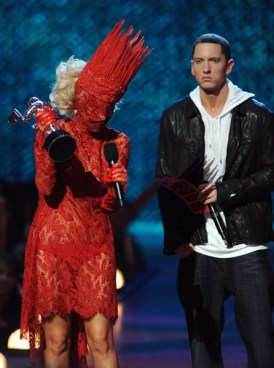 CHAT ROULETTE: “Our most popular new online tools—Google, Facebook, Tumblr, Twitter, Digg—were designed to help us tame the web’s wildness, to tag its outer limits and set up user-friendly taxonomies. ChatRoulette is, in this sense, a blast from the Internet past. It’s the anti-Facebook, pure social-media shuffle – Is ChatRoulette the Future of the Internet or Its Distant Past?“ (@nymag)

JOHN MAYER: Are you tired of hearing about John Mayer yet? Did you know that he, um, made out with Perez Hilton? ““The only man I’ve kissed is Perez Hilton. It was New Year’s Eve and I decided to go out and destroy myself. I was dating Jessica [Simpson] at the time, and I remember seeing Perez Hilton flitting about this club and acting as though he had just invented homosexuality. All of a sudden I thought, I can outgay this guy right now. I grabbed him and gave him the dirtiest, tongue-iest kiss I have ever put on anybody—almost as if I hated fags. I don’t think my mouth was even touching when I was tongue kissing him, that’s how disgusting this kiss was.” Um, yeah! Apparently GLAAD is taking issue with this and wants an apology. Raise your hand if you do not know how to feel right now! (@queersunited)(@digitalspy)

MCQUEEN: Stars from Madonna to Sarah Jessica Parker to Lady Gaga are expressing their sadness in the wake of Alexander McQueen’s suicide. Lady Gaga has tweeted a favorite photo of herself with her friend as a tribute. (@mtv)

POLAROID: Speaking of Gaga, remember how awhile ago it was announced that she would be Polaroid’s new creative director? We finally get to see her work! The camera comes in this sweet vintage style or a silver blobby one, and is equipped with flash, red-eye reduction and a selftimer. (@ohnotheydidnt)

AMAZING RACE: Carol and Brandy from LA are hoping to be the first lesbian couple to win Amazing Race – they say they’re going to prove that they’re “every bit as good as men,” (b/c they’re better at asking for directions!) and “hopefully change some hearts and minds” w/r/t gay women. (@metroweekly)

BIG GAY OUT: The annual Big Gay Out saw drag queens, the Prime Minister and supporters of the gay and lesbian community converge on Auckland’s Coyle Park. (@tvnz)

SORZ: Taylor Swift is one of the worst singers of all time. (@jamshowbiz)

TOOLS: The guilty-pleasure Vh1 show “Tool Academy” will now feature a lesbian couple, Cheron and her apparently tool-ish girlfriend Courtney. This is either a step forward for progress or two steps back for dignity. Or both. Anyways, this is what they look like! Cheron’s in the corner. (@afterellen)

ALICE: The soundtrack for the upcoming Alice in Wonderland film has leaked, and ONTD has helpfully compiled all the songs for you! It has Grace Potter, Kerli, Motion City Soundtrack and Wolfmother on it! (@ohnotheydidnt)

SILENT BOB: Nobody puts Kevin Smith in the corner. WTF Southwest, kicking the man off your airplane. (@jezebel)

POETRY: Trying to think of some romantic stuff at the last minute? Robert Pinsky at Slate has your back! He talks about some love poems, and don’t worry, there’s defo some Sappho in there. (@slate)

DOLPHIN: Happy Valentine’s Day from Jezebel and also us! Here’s a dolphin. (@jezebel)