Straddler On The Street: Shelby, 32

Shelby is an avid Autostraddle commenter, an A-Camper, a student, and a warm, welcoming human. She was so kind and enthusiastic when I met her at camp, and I was so psyched when she volunteered to be a Straddler On The Street!

She was born in the South but says all that remains of that “is a slight accent and an inability to take the last piece of pecan pie… not polite you know!” She’s on track to become a Licensed Clinical Professional Counselor, with a focus on Art Therapy and more creatively driven and less traditionally structure concepts of therapy. She’s not a fan of rigid gatekeeping systems and wants to work against the inherent prejudices within the professional track for therapists and counselors.

She told me her useless superpower is making anything into a song at the drop of a hat, and she loves creating, telling and building stories. Say hi to Shelby! 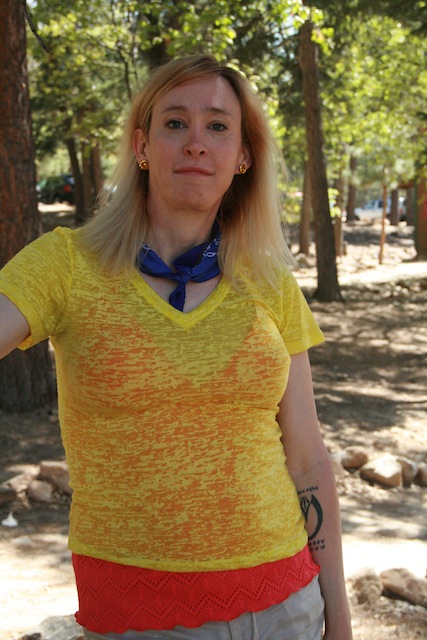 How old are you, where do you currently live, and what are you up to with your life?

I am 32 going on 22 it seems like. My wife and I live in Chicago and currently I am preparing to go back to school for my extended senior year. And then some.

I love it. I have lived all over the world as a military brat and bounced through a few cities even after leaving home and Chicago is the most comfortable big city I have lived in. I love it for some of the downtown architecture, for the people I have met upon returning to school. The pizza isn’t bad either.

What are you currently studying at school, and what do you hope to do with your degree when you finish?

I’m currently studying Women and Gender Studies – of course – but up until this last quarter I was a Psychology and WGS double major. I have all the Psych requirements for my masters already and needed some breathing space. I also shifted my focus heading into my senior year because that’s a good idea, right? I am going to eventually be a Licensed Clinical Professional Counselor focusing on Art Therapy. Hilly [my wife] is about to become Dr. Green and we hope to eventually open a queer focused practice and an eventual trans community center.

Woah, that all sounds incredible. And congrats to Hilly! You mentioned in your submission that you’re interested in costume work. Can you talk a bit about that?

I have been a geek since way back, I love pretty much everything sci-fi and yeah, I adore roleplaying games. The shame! Actually I have no shame about that at all. I started doing costume stuff and going to conventions back in 2001 and loved the idea of putting together original or movie accurate outfits or anime/furry stuff.

That doesn’t sound shameful at all, that sounds so cool! What are some of your favorite conventions, or favorite costumes you’ve put together?

I have a rich fantasy life – it’s probably too rich and should share the wealth more or something. Some of my favorite conventions were Acon in Dallas as well as Acen and MFF here in Chicago. I would say my favorite costumes I put together were an entire Steampunk crew from a classic Burroughs Mars setting – not the awful John Carter movie, blerg. I still have a lot of the props laying around here. My favorite commission was a custom Sonic Screwdriver for someone.

Oh wow, people commission stuff from you?! Where did you learn how to do that sort of stuff? Are you self taught?

I have always enjoyed creating things or art from scrap. I am self taught, and the quality of my teaching shows at times. I tend to make things that look pretty good but I can never promise it will turn out okay when I start. Its a pretty organic process, just seeing what happens. I wish I were faster so that I could take more commissions. I have made about five full costumes and maybe an equal number of props and stuff.

I’ve never met anyone who does that – it sounds so neat. You also mentioned you do a lot of wood working and found object art. Tell me about that.

Well my stepfather was funny; when he got irritated he would build things. All kinds of things with whatever wood was lying around. I picked that up from helping out on stuff and eventually we joked that we could build anything as long as the materials we had weren’t brand new. Apparently straight lines and right angles are perplexing… for the record I still can’t manage straight anything. 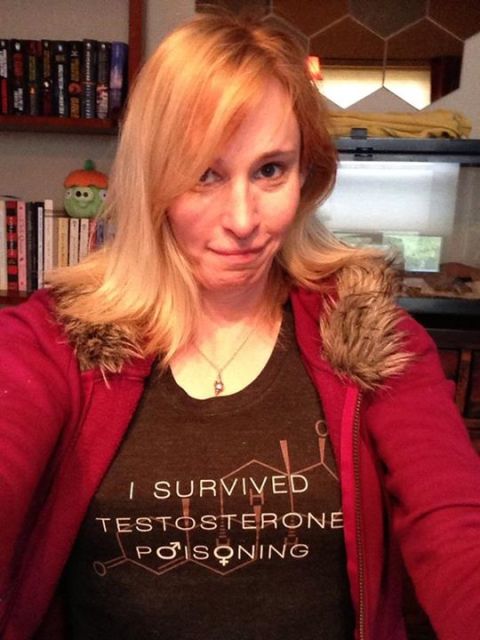 “for the record I still can’t manage straight anything.”

The desk I am sitting at was build by me, after disassembling some old oak cabinets, and I like making small display pieces like frames or decorative pieces like tree silhouettes or recently a fireplace mantel thingy. The found object stuff is almost exclusively steampunk because, well, a great deal of it is fantastical and no one can tell me that my Jetpack isn’t exactly built the way it should be.

That is such an awesome hobby and passion. Let’s talk movies. You said you like bad ones – list some favorites, please!

Oh wow. So many good bad movies. Pretty much anything with Molly Ringwald, although those not really bad movies now that I think about it. Sappy 80s-90s romance movies like Say Anything and the like. Also a lot of Hong Kong and Korean films, as well as old Monster Movies like Fright Night, or Godzilla. I am kind of a Pixar fan too, although they are starting to go downhill.

I have a bit of a crush on Katee Sackhoff, Ellen Page and well, I can’t stop raving about Laverne Cox on Orange is the New Black. She is my idol right about now.

Do you have any thoughts/feelings about the show?

So many thoughts and feels on the show. I adore Laverne Cox and the way that she and the writers are presenting a broader view of a trans woman. I found it really hard to get through the first episode because it was so uncomfortable, but that’s partially the point. I really appreciate the conversations the show is starting and the view of the prison system, although I will admit to having just as many critiques of the prison and racial issues that the show claims to be ‘realistically’ presenting. They get a lot right, more than most, but they ignore other things… I haven’t even finished it yet, though! I am only about four episodes in and am desperately trying to get through it ahead of the spoilers.

Oh, same! Everyone keeps yelling at me because I haven’t watched yet. I’m going to, though! Next question: how did you discover Autostraddle?

I think it was from a post on Facebook a while back, or possibly a link through a queer blog that I wrote something for. I had been casting around for a good queer / lesbian centered blog or news site for a while but to be honest, as a trans woman, a lot of them were far less than welcoming. I can’t remember what article or event it was from Autostraddle, but I remembered seeing a rude and dismissive comment about a trans woman, and then this explosion of support from the AS community. I had never seen anything like it. Within a month or so both Hilly and I were all over AS and heading to A-Camp, which was… kinda life changing. 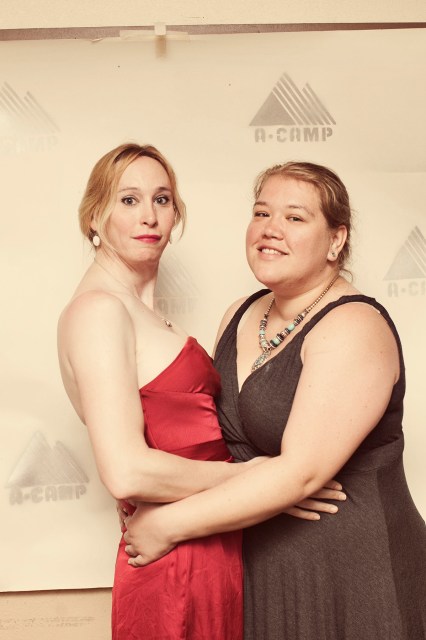 shelby and hilly at the a-camp dance

Can you talk about your A-Camp experience, please?

A-Camp was something that kept me going through the beginning of a rough year. I had dropped my spring quarter and was in the middle of probably one of the worst depressions I had ever felt. I was a wreck but the one thing we held onto was that in May we could get away and celebrate our 1 year wedding anniversary and hang out with wonderful women.

I wasn’t sure what to expect, and was pretty terrified on the bus headed up the mountain. But everyone was so open and by day two there was this bizarre realization that there were no hierarchies of thin women, fat women, tall women, ugly women, or anyone out of anyone’s league. It was just US, and the judgment that is as much the part of my day to day life as air is was gone. It was just lighter up there. And that wasn’t just because of the elevation.

Ugh, when people talk about camp my heart swells like 400 sizes. Can you also tell me a bit about your wedding?

The ceremony was tiny, only about 25 people including family. When Hilly and I started dating about 8 years back her family saw me as the tolerable male for their daughter. When I transitioned about 3 years back and they were informed of her never having been all that straight and now being happier with a women, they were… less than thrilled. I’d like to say they got over it but they haven’t, and probably won’t. But ah well.

The ceremony was beautiful and since we were in PA we used a Quaker wedding ceremony where you self marry. No officiant is needed. Just you, your partner, and two people to witness you both saying “Hey look. We’re married!” My family were happy for us, so were our guests, so 23 out of 25 isn’t bad.

Oh wow, that does sound beautiful. Thank you for sharing! On a totally different note, what are some of your favorite books?

Anything not textbook related! But seriously… I don’t read as much as I should. I used to devour books but since starting school I have been swamped and not able to do as much reading for fun. I just started Imogen Binnie’s book Nevada and like it.

Oh, I liked that too. I was disappointed with the ending though. Anyway! Finally, do you have anything else you’d like to share with the Autostraddle community? 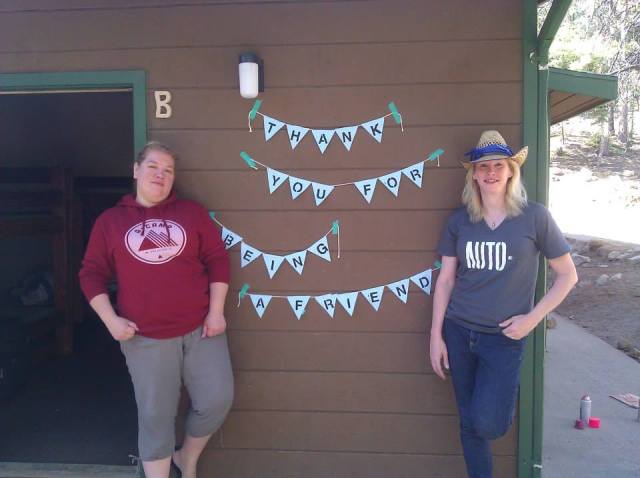 Vanessa has written 338 articles for us.