Straddler On The Street: Aimée, 25

Aimée emailed me months and months ago, back when she was still 24 and living in Ireland and not dating Autostraddle’s very own Kate/Kade, making up one half of a very adorable couple if I do say so myself (and I do, duh). She explained via email why I should profile her as a Straddler, stating: “I’m 24, queer and Irish. I’ve a chronic disease, Lupus, and I think it’d be interesting to have some more content from non-able bodied Straddlers. It’s impacted on my life in a lot of different ways, and has definitely helped form my overall identity.”

I was sold from that very first introductory email, and when I met Aimée several months later at A-Camp my strong feelings of “YES!” were only reinforced. Since then Aimée has lived in America for a few months, turned 25, and continued to be charming, lovely and well-dressed. Aimée is a badass femme who is not to be messed with, and her commitment to intersectionality and general awesomeness is super admirable. Plus she looks amazing in black lace. 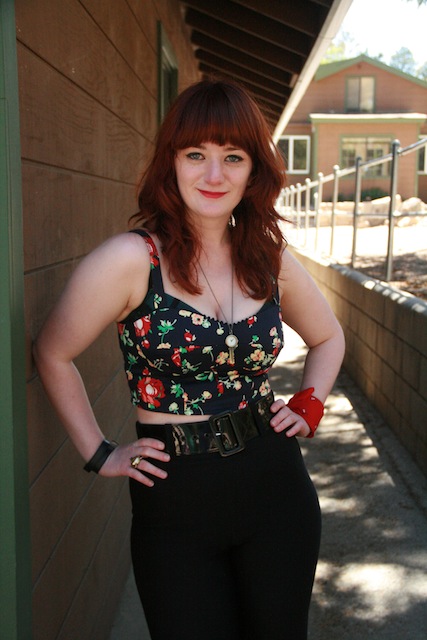 Okay, tell me about yourself! Where you’re from, how old you are, what you’re up to these days?

I [just] turned 25 and had a mild quarterlife crisis. Turning 25 in America was pretty great though. I’m from Bray, which is a town in Wicklow, Ireland. Katie Taylor – the super hot Olympic gold medal winning boxer – is from there too, you should check her out. I’ve lived in Dublin for the last six or so years though.

But now you’re in America, yes?

Right now I’m in Philly, living with Kade, and have been since [getting back from] A-Camp. I go back to Dublin August 19th, which is when I will have to Figure Out My Life. I have not had the most traditional life route because of my illness.

Could you talk a little bit about your illness, please?

So I have Systemic lupus erythematosus (SLE) or lupus for short. It’s an autoimmune disease which basically means that my immune system doesn’t know to defend against infection and attacks healthy tissue. It has affected me in a myriad of ways. I studied theater in college and recently had to leave as my department didn’t believe my illness was compatible with the course.

It also massively impacted the formation of my queer identity. In a lot of ways I’m about four years behind where I should be. I had come out to friends as bi when I was about 13. When I left secondary school I entered into a relationship with a cis guy. About two months into that relationship I fell ill. I had to leave college and was very unwell for pretty much four years, as lupus is a bitch to diagnose. During that time I pretty much saw no one except my ex-boyfriend and a couple of friends. I always knew something wasn’t right in the relationship however it wasn’t until I was well enough to go back to college that I knew. After literally one month of being around people I knew I was queer, and had no interest in cis guys.

Wow, that is definitely very intertwined. Can you speak a little bit about what you mean when you say you “knew”?

I think the concept of hegemonic masculinity that was pushed down my throat had a lot to do with my confusion. I knew that there were so many elements of masculinity that I was attracted to, so at 18 I thought that meant of course I had to like cis guys. Masculinity = men, right? It was the only form of masculinity that I was exposed to for a long time. I’ll also put a bit of blame on the media industry right now, Clea DuVall should not have been the butchest person lil’ teenage me was exposed to. So when I finally went out into the world and began to meet people that were masculine, in the exact way I had always dreamed of, but never realized existed, I Just Knew.

That echoes my experience a lot – thanks for articulating so many of my thoughts! Going back to lupus, is there anything you wish you could tell people – a disclaimer of sorts?

Listen, try to understand, and be patient.

That would be such a good thing for people to remember across the board. What are some of the misconceptions people have about your illness?

Eugh, the reactions can be so varied. Because I look well most of the time, that’s how people treat me. Which is fine, but can be frustrating when I explain that there are things I can’t do and people react as if I’m lazy or purposefully trying to be awkward. For example, my lungs are kinda shot, so I can’t be around a lot of smoke. I have been in situations where people have literally been talking about white/cis privilege and intersectionality and I’ve asked if maybe they could not smoke indoors around me because of my lungs. They did not respond well, and made me feel as if I was being rude. I don’t understand how people don’t see the connection. Previous partners have also made fun of me or made me feel guilty about not attending things, or not being able to fully look after myself when I’m ill. Thankfully I am now in a perfect situation in that regards.

A lot of the time you’re not seen as a sexual being if you have a chronic illness or disability, which is extremely difficult to deal with. If your own body can’t even recognize itself as something positive and worth keeping alive, you start to question that yourself. When you look in the mirror, you see illness. You see everything that is wrong with you and what your body is doing to itself. Sometimes it’s impossible to think of how someone could see anything but your illness when they look at you, so it’s hard to think of yourself as ever being desirable. Identifying as femme has given me the confidence to start changing how I think of my body and my illness. I embrace an often overtly sexual, tacky pinup femininity that stares down the notion of a healthy ideal. 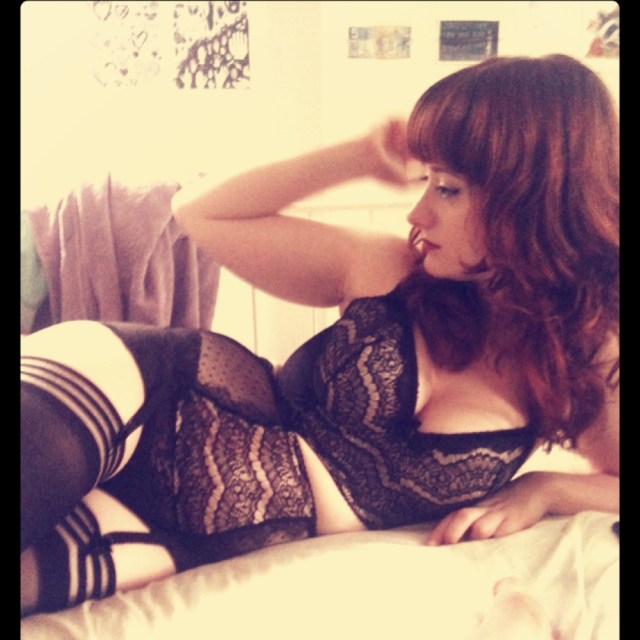 I actually wanted to talk about your femme identity! What does femme mean to you?

Discovering femme was like coming home. When I came out as queer I was a little bit lost. So I did what I always do and read. I read everything I could get my hands on and femme-dom just pulled me in. I found Brazen Femme: Queering Femininity quite helpful, and the Femme Shark Manifesto. I could take everything that had ever been used against me, everything that had ever been used to make me feel weak, or stupid or powerless and I could fold and mold and subvert it into my armor, into what makes me powerful.

That’s the best. Can you talk a little bit about your style?

I would describe my style as uh… well if David Bowie was a tacky pinup femme. That’s pretty accurate. Clothing means so much to me, costume is my thing, so I see clothing as hugely performative. Each color, cut, pattern is nuanced, and can be used to express a different element of personality of mood. This is why watching Mad Men is heaven for me, I worship Janie Bryant. I shop a lot in charity and thrift stores. There’s a UK based shop called New Look that actually does some pretty cute pinup stuff. I want everything made by Bettie Page and Pinupgirlclothing. I generally look for anything that make me feel like Joan Holloway, and I have a penchant for shiny Bowie-esque accessories.

Oh god. I knew that question was coming. It terrifies me. Even though I knew it was coming and I talked about it I still HAVE NO IDEA. Um. Um. Um.

We can skip it if it’s too much! I can skip ahead to celeb crushes!

Crave by Sarah Kane is one of my favorite plays, if that helps?

Yes, I’ll take it! But speaking of celeb crushes… let’s go there now.

Oh god, that’s hard… see previous comments on the lack of butches. I could say Kade just to piss them off haha!

Let’s be real, Kade is a celeb.

Number 39 I believe! I have never let them live that down.

It’s true, it happened. Okay, moving on! Can you talk about some of the cultural differences you’ve noticed about America vs. Europe?

Mmmkay. Queerwise there’s much more of a butch/femme dichotomy, which is strange to me. People are also less friendly in public. At home it would be pretty normal to strike up a conversation with someone while waiting in line, or on public transport, and that just doesn’t happen here. In fact I was warned to not talk to random strangers. OH! You have INDIVIDUALLY WRAPPED POTATOES. That is just so very wrong to my Irish soul. People are generally really friendly once they find out I’m Irish. I’ve been offered lots of free stuff, even free whiskey in a pub.

A combination of Google and an ex. But mostly Google, during my ‘READ ALL THE QUEER THINGS’ period.

We are a queer thing! Can you tell me some of you A-Camp feelings? Favorite moments, expectations, or anything at all.

Hmm, well, [a favorite moment is that] I finally got to meet Kade in person. And my cabin, The Infernos, were just such wonderful people. My favorite moment with them was on the last night before the dance party, I poured us all the 12-year-old Jameson I had brought from home and we toasted each other and then had a big group hug. I am also deeply in love with all of the wonderful femmes I met. And my baby gingers! For me camp was about the people. I travelled over 5000 miles and found my family.

Awwwww. Before I burst into tears, do you have anything else you want to share with the Autostraddle community? 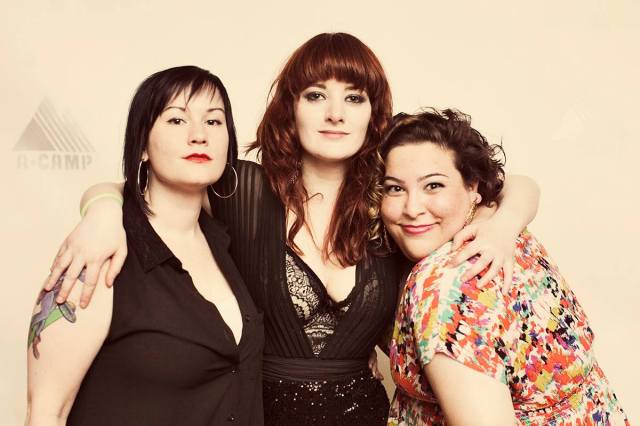