Wow, Star Trek, you really know how to tackle those hard issues. Unfortunately, I think the show creators handled the issue of mail-order brides and human trafficking with ZERO TACT. However, “Mudd’s Women” does give viewers some special insight into the legal rules and ramifications of the Star Trek world (and lack thereof). You can watch along (and rage along) with me here.

Looks like Uhura’s rocking a gold command uniform in this episode! However, it’s just temporary – they started her out in gold early in production, and then decided to keep her in a red engineering/support outfit for the rest of the series. 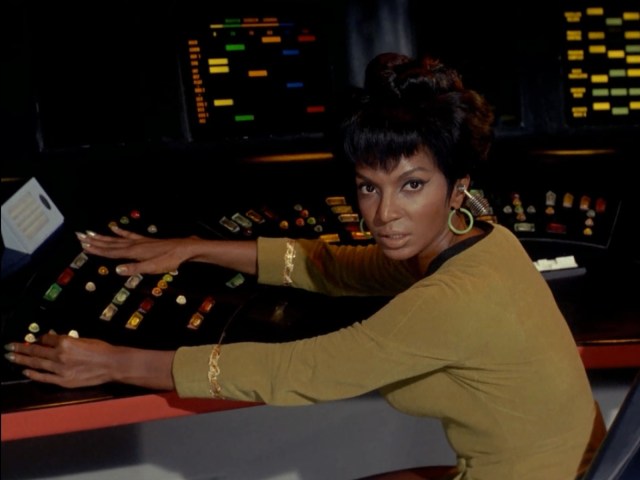 Check out those earrings! And that Bluetooth headset! Uhura’s always stylin’.

The episode opens on the Enterprise, as it chases an unidentified craft through an asteroid belt. Talk about risky! The vessel’s engines overheat and blow out. It drifts in space, about to get smashed by an asteroid at any moment! 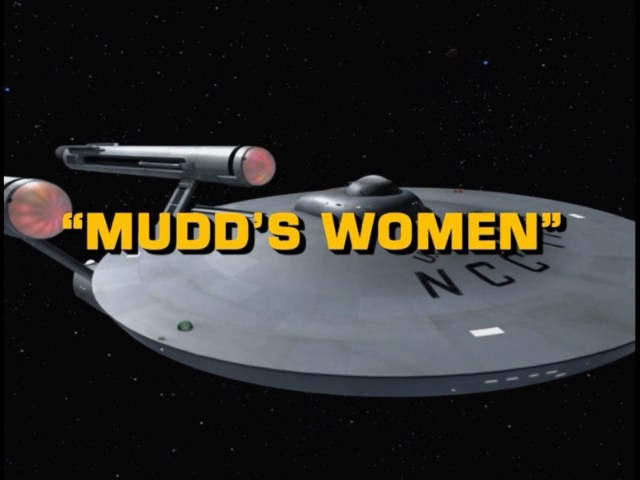 Mudd? Wasn’t that a brand of jeans popular in the 90’s? 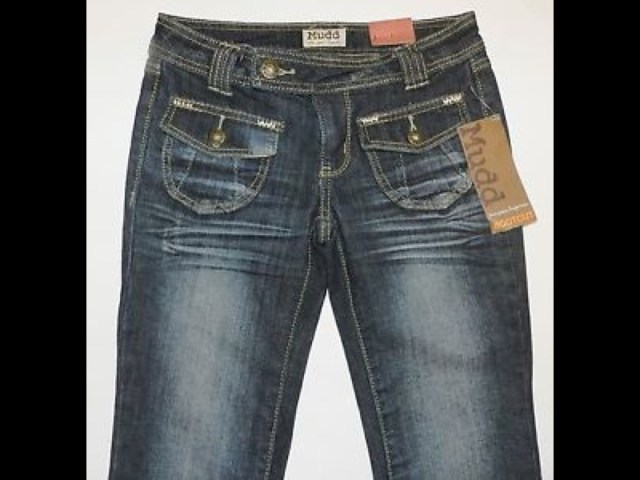 Kirk decides to jump in and rescue the poor crew, before they go ka-blooey. Unfortunately, this means they have to dedicate massive power resources (like the Enterprise’s precious lithium crystals) to chase the vessel and shield it from asteroids.

Scotty starts beaming people over, and guess who appears? This jolly hipster pirate guy with a thick Irish accent! I don’t even…. 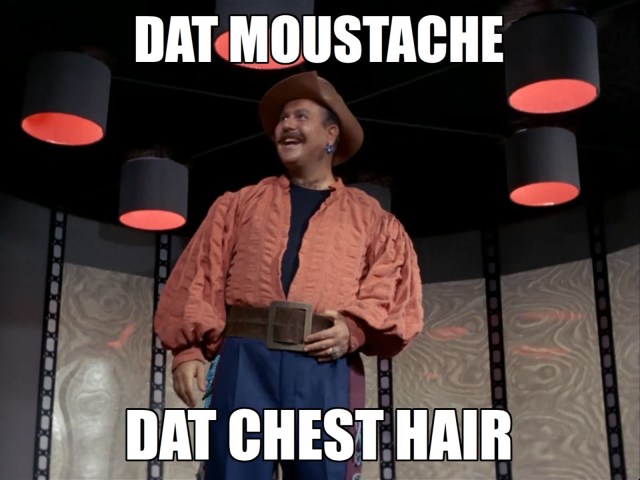 This guy is immediately sketchy, avoiding questions about his crew and why they were fleeing in the first place. He introduces himself as “Captain Leo Walsh!” Then to add the confusion, look who beams over just as Walsh’s ship gets smashed by asteroids: 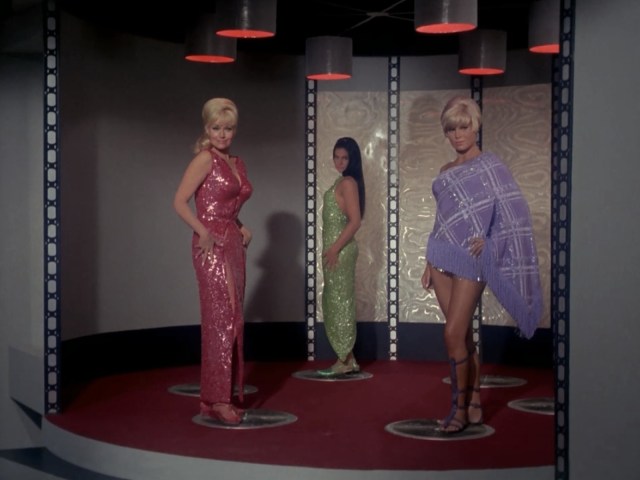 This was probably supposed to be racy for 1960’s television. But all I could think of was old McCall’s sewing patterns.

These women spend about five minutes of the show striking various “titillating” poses while Bones and Scotty drool all over them. What an appropriate time for Kirk to ask over the intercom: “Bridge to transporter room. How many did we get off?” 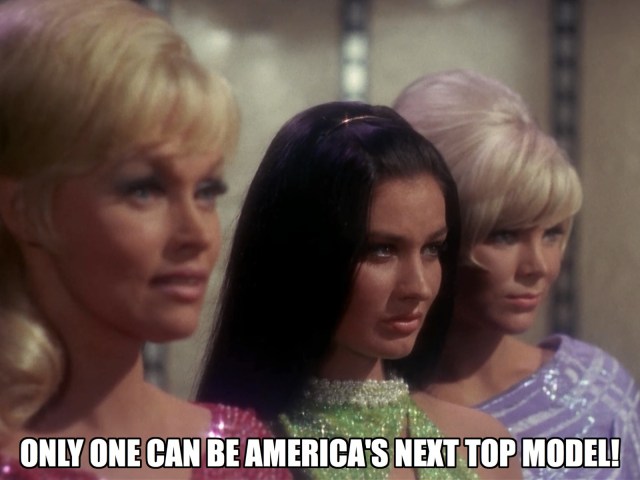 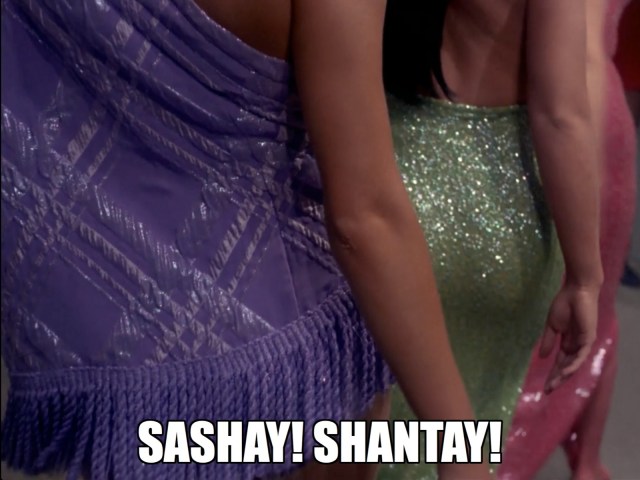 Kirk and Spock shippers, you’ll be pleased to know that Spock is totally unmoved. He rides up in the elevator with Captain Walsh, Eve (wearing pink), Magda (purple), and Ruth (green).

The women try to charm Spock, but Captain Walsh interjects. “You’re part Vulcanian, aren’t you? A pretty face doesn’t affect you at all, does it? You can save it girls. This type can turn himself off from any emotion!” 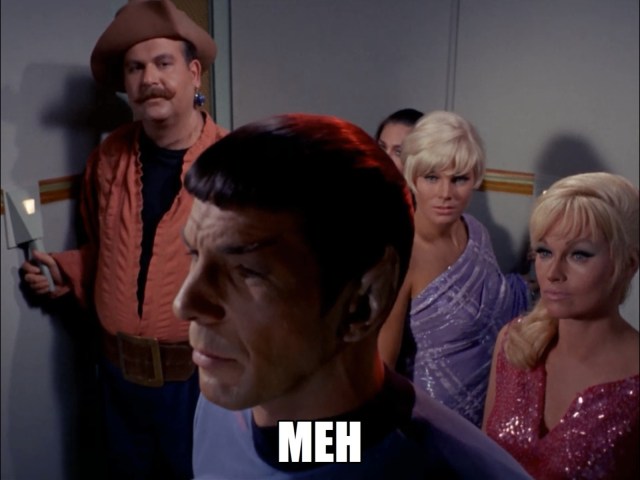 A Tale of Human Trafficking

The party reaches the bridge, and of course, Kirk is enthralled by the women. This is when Walsh straight up admits that Eve, Magda, and Ruth are his CARGO. Not his crew. Yuck yuck yuck. This character is truly disgusting. The fact that he can openly admit trafficking these women makes me worried about laws in the future… how alarming. 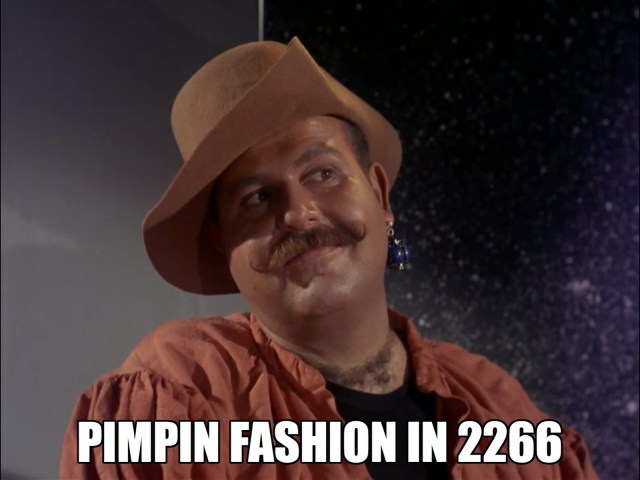 Hella creepy and so not okay.

Instead of getting upset about the very clear human trafficking issue, Kirk decides to focus on Walsh’s reckless driving. He’s going to confine Walsh and the women until they can have a formal Starfleet trial.

Security escorts the group away, and the guys can’t help but fixate on Eve, Magda, and Ruth. 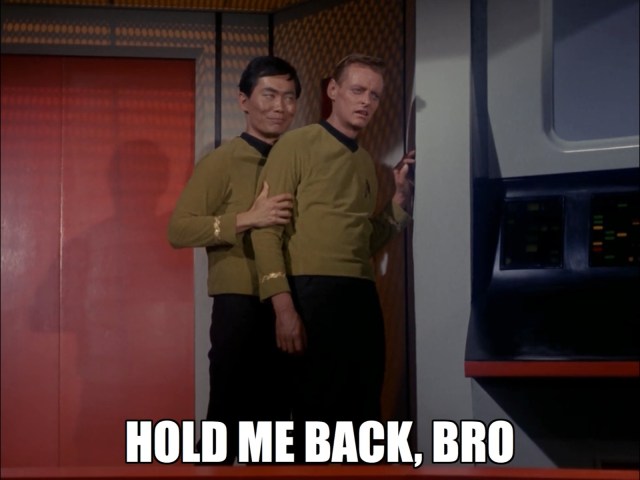 Poor Johnny is suffering from intense hetero desires, and Sulu restrains him.

The newcomers are really shitty at keeping secrets. While the security guards confine them to a conference room, the women fret aloud about staying away from medical inspections and how they’re different from everyone else. Their depiction as total airheads really infuriated me. Someone slips and refers to Leo Walsh as “Harry.”

The officers jump into a hearing to determine the fate of their visitors. A computer sits in on the conversation, playing the role of a lie detector. The computer blurts out “INCORRECT” when Walsh identifies himself as “Leo Walsh.” Turns out his real name is Harcourt “Harry” Mudd, and boy, he’s got a rap sheet a mile long! We also discover that the women are being trafficked to Ophiucus III to become settlers’ wives. 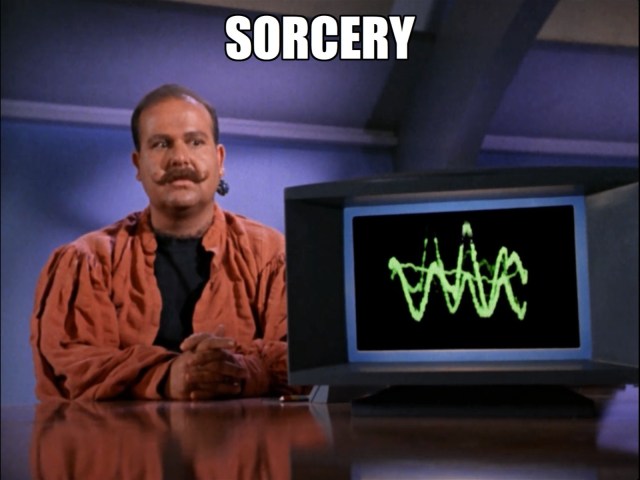 You are the weakest link. Goodbye! 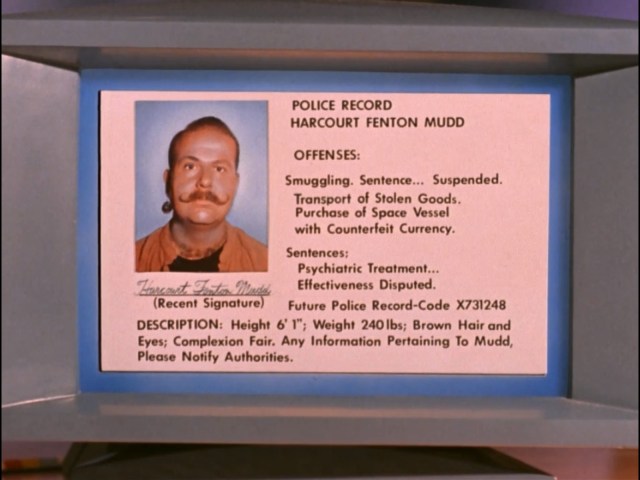 Can we add “human trafficker” and “horrible fashion sense” to the list of offenses?

Sheriff Kirk lectures Mudd on endangering the Enterprise, charging him with: galaxy travel without a flight plan, traveling without an identification beam, failure to answer a starship’s signal, operating a vessel without a master’s license, and being a general “menace to navigation.” But NO charge for human trafficking?? Really?

Aside from the officers’ lack of concern about the women, I found this scene to be very interesting when it comes to the rules of this world. I’m looking forward to learning more about Starfleet’s role in upholding the law.

Back in Dick Bay, I Mean Sick Bay

Remember how all sorts of strange, kinky things seem to happen in sick bay? Well Bones breaks the cycle! Ruth wanders in, attempting to seduce the Doctor by walking around and posing (seriously?). She passes near a medical scanner, which displays two strobing dots. Bones is baffled by the readout, and seems to snap out of his trance. He asks Ruth if she’s wearing some kind of strange or radioactive perfume. She denies everything, and leaves. 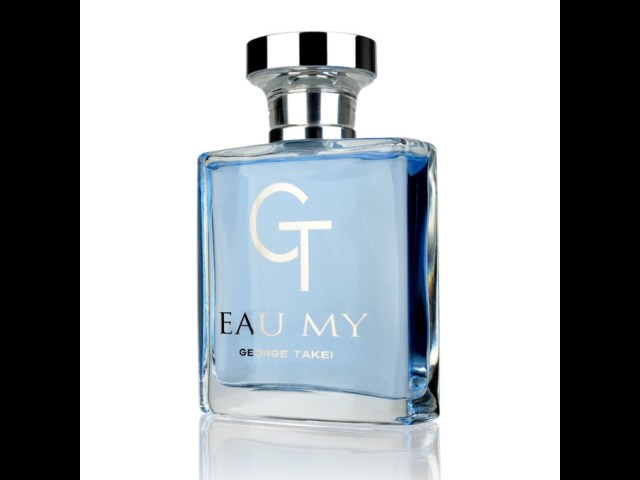 Strange perfume? You mean like this wonderful fragrance by George Takei?

Emergency Trip to the Crystal Mines

So the Enterprise is in some deep shit. Their lithium crystals, which power the ship, shattered during their pursuit and rescue of Mudd, Eve, Magda, and Ruth. Now the Enterprise must embark on a quest to Rigel XII, a mining planet, so they can restore their crystals. 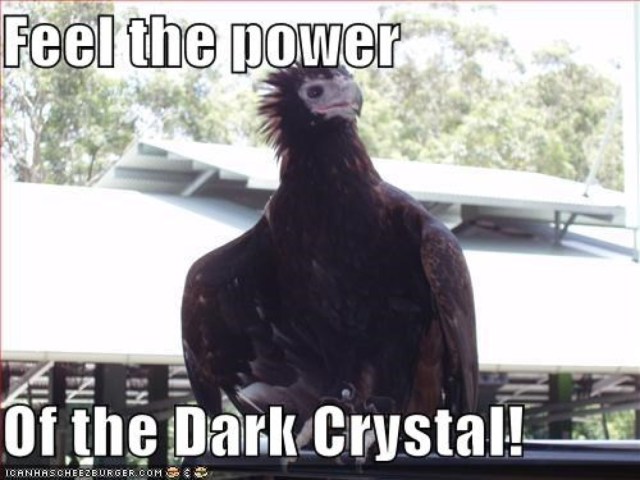 Unfortunately, Mudd gets ahold of a communicator and makes a shady deal with the miners behind Kirk’s back. He’s all excited, getting SUPER CREEPY and exclaiming, “Girls, lithium miners! Don’t you understand? Lonely, isolated, overworked, RICH lithium miners! Girls, do you still want husbands?” Mudd entertains himself with delusions of grandeur, imaging aloud that he can sell the women for immense profits and become the new captain of the Enterprise. Hurl.

The four of them scheme about seducing the lonely miners and taking over the entire planet. I really hope Rigel XII looks like this when they arrive: 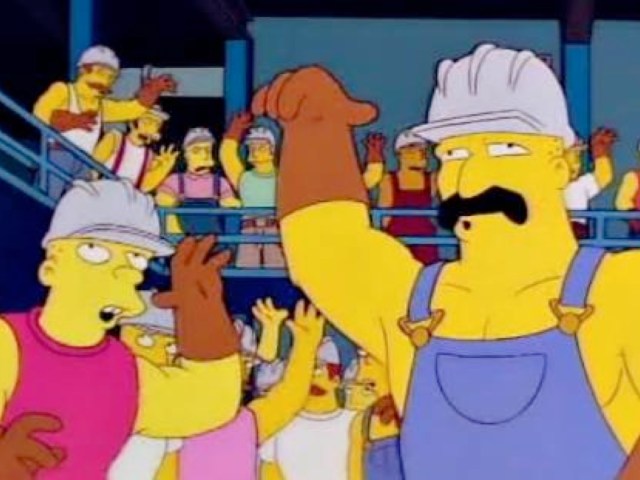 But then we learn their secret! The women have been taking a special “Venus Drug” which keeps them young and beautiful! If they don’t take their drugs, then they wilt into wrinkly, less-airbrushed women! 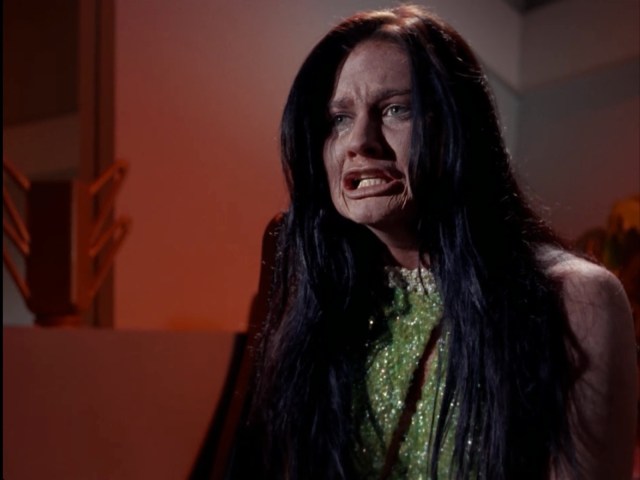 Oh darn, my Photoshop wore off.

The Enterprise parks itself in the planet’s orbit. The miners beam up and reveal that they’re not giving up the crystals. Why? Because good ol’ Mudd promised them the women, in exchange for his own sanctuary. This way, he’ll get to escape trial for his crimes.

Kirk isn’t having it, and exclaims “NO DEAL!” Well, they’ve only got power for a few more hours, and the crystals are hidden somewhere on Rigel. Whoops! If the Enterprise runs out of power, then they’ll go spiraling off into space. I know I’ve asked this before… but can they not land the ship on the planet? 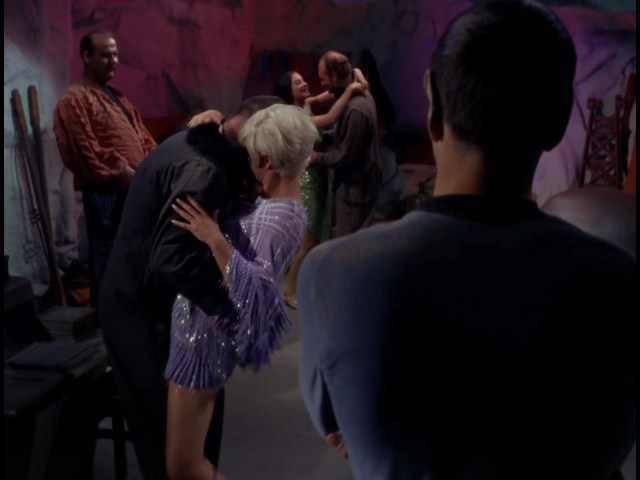 Spock is not amused.

Everyone beams down, and the miners get cozy with the women. They begin to dance, but Eve isn’t feeling so well. She’s wracked with guilt, because they totally screwed up the Enterprise. Her future husband, Ben Childress, is butthurt that she won’t dance with him, so he tries to cut into other couples’ dances. Chaos ensues.

Eve is distraught, and rushes out into the windy sandstorm of Rigel XII. Her husband-to-be, Ben Childress, rushes after her and carries her back to shelter. He falls asleep on a bench, exhausted.

When Ben wakes up, Eve is already in the kitchen, cooking up food and performing her wifely duties! Who know that heteronormativity could thrive so well on a deserted planet!? He derides Eve’s efforts, bragging about how he could make better food and survive without her.

But then Eve impresses him by suggesting that he hang the dishes outside. Since they’re low on water, the sand can blast away the grime, leaving those dishes spotless! Eve is full of Martha Stewart housekeeping surprises! 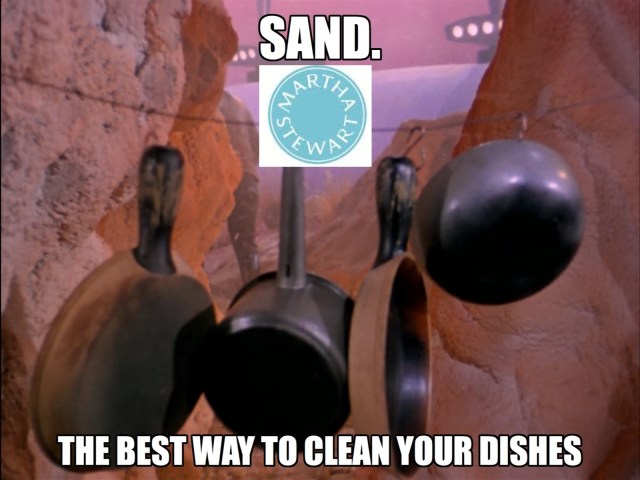 But then Eve’s looks begin to fade and Ben is ENRAGED! Kirk and Mudd beam down and hand her more of the pills. Eve pops them, then transforms back into Airbrushed! Eve.

But guess what! They were placebos!!! Eve is astonished and asks how these fake pills worked. And Kirk tells her, “You either believe in yourself, or you don’t.” I SHIT YOU NOT. Apparently the magical antidote to everything is to BELIEVE IN YOURSELF. None of this makes any goddamn sense. Also Kirk I’ve lost tons of respect for you! 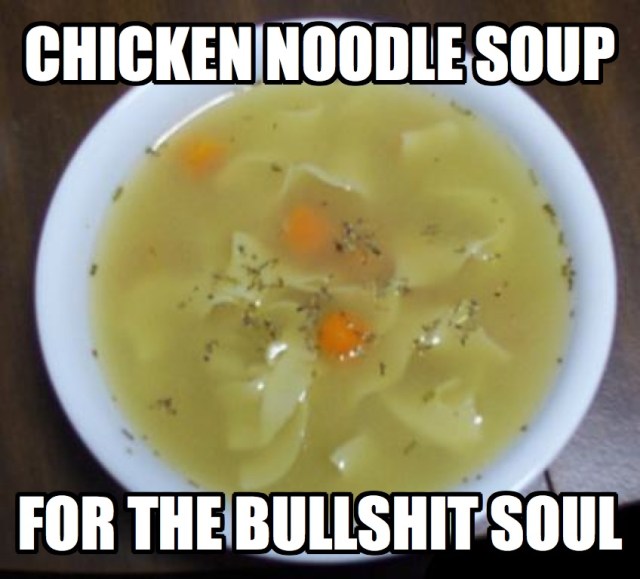 Right. Astonishingly enough, Eve and Ben decide to stay together and see if their marriage will work. In what universe is this a good deal for Eve, Magda, or Ruth? They’re stranding themselves on a deserted planet with husbands they don’t even know. And Kirk doesn’t check in with Magda or Ruth to see if this is okay. He just peaces out!

The episode ends with some chummy banter between Mudd and Kirk. Mudd jokes around, hoping that the Captain will just leave him behind on the planet. And Kirk insists that he’ll “appear as a character witness” at Mudd’s trial. 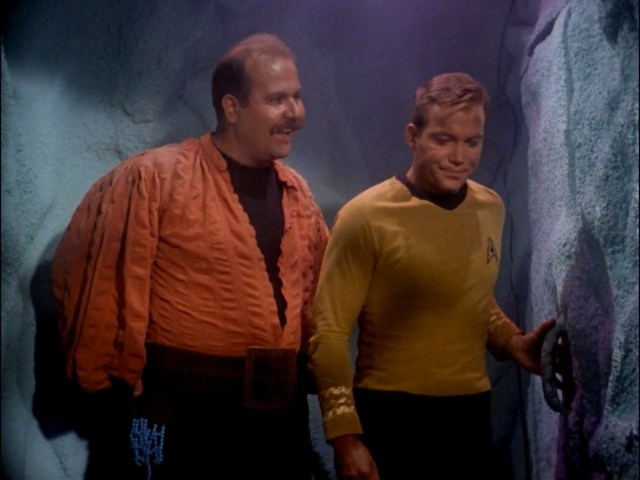 And the episode ends there. I definitely was not expecting that. Star Trek writers, WHAT were you thinking? This grossly trivialized human trafficking and bought into some silly bullshit about self-confidence and the “feminine mystique.” It’s gonna take me a while to recover from this one. 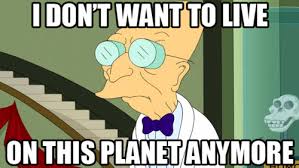