A few months ago, a bill supporting the rights of transgender and other gender nonconforming people failed to come up for a vote in the New York State Senate. It died quietly years after Republicans and Democrats came together to vote in support of same sex marriage. Like most failed legislative efforts, there usually isn’t one clear-cut reason for its downfall. A myriad of forces were working against the bill: a coterie of Democrats aligned with Republicans, a lack of unity in the advocacy community and a wider political problem in how elected leaders perceive Americans’ opinions of transgender people. 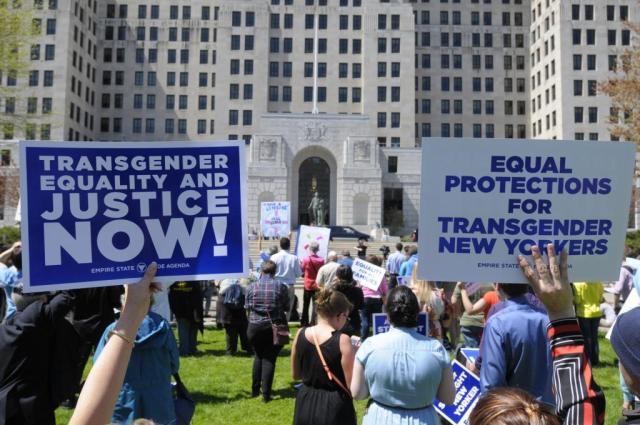 Let’s start with the obvious: The bill wasn’t prioritized as same sex marriage efforts were, which is not a story only familiar to New York, but the whole country. Same sex marriage has been the central focus of major LGBT rights organizations for years, to the consternation of many LGBT rights activists, who believe issues that impact impoverished people, and/or people of color, have been neglected. After DOMA, one would think this would be the best time for activists to shine a light on other issues, such as hate crimes against LGBT people.

But that hasn’t proven to be the case, at least in New York.

Activists have differed in their approach to pushing the Gender Expression Non-Discrimination Act. The Empire State Pride Agenda released a radio ad that never used the word “transgender.” The segment started with a voice informing a transgender or gender nonconforming person that they would be evicted from their home. Then it begins:

“In a tough economy, New Yorkers hear bad news every day, but in New York State, you can be evicted from your home or even fired from your job just for being yourself. That’s right, even in 2013, it’s still legal to discriminate against New Yorkers because of their gender identity or expression. Sixteen other states already outlaw discrimination against Americans because of their gender expression or identity. And local governments, including Buffalo and Suffolk County, have fixed this injustice, but New York State has yet to act. To protect the rights of all New Yorkers, Albany must pass the (GENDA). New York has always been a beacon of civil rights and equality. It’s time to protect the civil rights of all New Yorkers. Tell Albany to pass the (GENDA).”

The radio ad was part of a $250,000 campaign by ESPA according to Jimmy Vielkind’s reporting in The Times Union, compared to the $1 million organizers said they would spend on lobbying for same sex marriage, according to Gannett’s Albany Bureau Chief, Joseph Spector. When I asked ESPA how much had been spent on the campaign overall, ESPA would not divulge the money spent in lobbying and advertising for either the GENDA campaign or lobbying for same sex marriage legislation, saying that the GENDA campaign is ongoing.

A video that is basically the same as the radio advertisement showed on local television stations as well, showing a map of the United States, and captions, but never mentioned the word “transgender” or showed any photos of actual transgender people or gender nonconforming people. Contrast that advertisement with an ESPA advertisement run in 2009 campaigning for same sex marriage rights, named “Barb & Don,” in which an older couple talks about their daughter’s wife and children. It is a heartbreaking ad because you see the people ESPA is fighting for. Photo after photo is shown of Amy and her wife and daughter. Both television ads lasted 30 seconds.

ESPA also chose to create a video portraying a trans woman and World War II veteran, Joanne. The video has been shown on ESPA’s social channels and at festivals. But it may have been easier for people to identify with Joanne than with than the clinical, less personal approach taken in the television ad: All of these other states are doing this. New York should too.

Ryan Sallans, a trans man who speaks as an activist on transgender issues, said there is hesitancy from leaders in major LGBT advocacy organizations to use the word “transgender,” pointing out that, historically, trans issues are pushed out of LGBT groups’ legislative agendas.

“A lot of the time, people think, ‘Bring too much attention to the word and people will look away. Sometimes they drop gender ID from it [nondiscrimination bills] entirely.’ There are multiple factors—It has to do with money, education and transphobia within the LGBT community,” Sallans said.

Although 90% of Fortune 500 companies have policies prohibiting discrimination based on sexual orientation, only 57% have policies prohibiting discrimination based on gender identity. That is a majority but the difference between the number of companies with policies on sexual identity and sexual orientation is striking, and gives more weight to the importance of GENDA and the national ENDA legislation.

There has also been disagreement between ESPA and Human Rights Campaign as to how divided Democrats were on the bill, with ESPA stating Democrats were mostly unified.

“Democrats were actually overwhelmingly in agreement with passing GENDA, as are 78 percent of voters in New York State on both sides of the aisle…We believe strongly that GENDA is not a question of why, but rather when,” Nathan M. Schaefer, Empire State Pride Agenda Executive Director, said in a statement.

Fred Sainz, spokesman for HRC, released this statement, however:

“Despite passing the State Assembly easily, GENDA was not brought up for a vote by the State Senate due to political division between Democrats and the Independent Democratic Caucus (IDC), a small group of Democrats who have allied themselves with the Republicans in order to maintain control over the Senate. The Governor supports the bill but did not make GENDA part of his official legislative agenda.”

Melissa Sklarz, a longtime transgender activist and president of the Stonewall Democrats of New York City, who lobbied on behalf of the Human Rights Campaign, said the effort wasn’t as unified as it could be and lacked some of the necessary manpower. She also argues this kind of legislation had to take place in a nonelection year.

“I wish that the transgender community was more engaged in this. But we go to war with the people and the weapons we have… In nonelection years it’s easier. We will keep doing what we’ve been doing in an election year, but it’s difficult for a bill covering 300,000 New Yorkers in a state of 12 million people,” Sklarz said.

Skarlz said she, along with other lobbyists, would come to Albany every Tuesday to meet with legislators, especially those legislators who live in districts where fights against gender discrimination have already succeeded in those districts’ cities. Many of the Senators from those districts are Republicans, however, and only one of them, Mike Grisanti from Buffalo, voted for same sex marriage. Thomas F. O’Mara and Joseph Robach voted against and Thomas Libous co-sponsored legislation to render same sex marriage void.

I contacted members of the Independent Democratic Caucus, David Valesky, Diane Savino and Jeffrey Klein, for comment, but none of them responded within my deadline.

Sallans said that one of the most significant issues preventing the kind of engagement that is necessary for legislative victories from happening is the lack of transgender people in those organizations’ leadership.

“We need to focus on bringing our community together. When you have two different oppressed groups, often one oppressed group pushes down another so at least they’re further up the totem pole,” Sallans said. “[On finding transgender leaders] It would require the organization to show they’re trying to attract trans supporters and it would take recruiting within that community, to find qualified transgender people, because there are certainly enough qualified people.”

Lisa Mottet, the Transgender Civil Rights Project Director at National Gay and Lesbian Task Force, said it is a national embarrassment for New Yorkers, and especially for the governor, that he did not put his full weight behind the legislation.

“If people are worried about this legislation, they don’t understand the political dynamics in this country,” Mottet said.

Casey has written 1 article for us.