Get out your ale and bodkins and settle down for some Shakespeare, because this episode is pretty much a Star Trek remix of Hamlet and Macbeth. Lit nerds, I’ll be sure to call out the plays and passages for ya in this one. As always, watch along here. 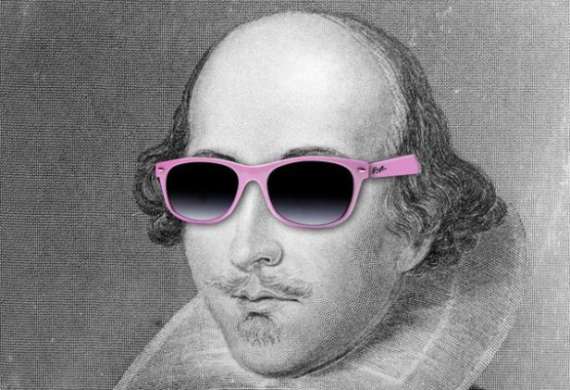 And one cried, “Murder!”

We open on a scene from Macbeth (Act 2, Scene 2), right after King Duncan’s death. While the actor waves his bloody hands around, an audience member with an eye-patch seems fixated on the actor playing Macbeth.

He seems to really hate this actor. 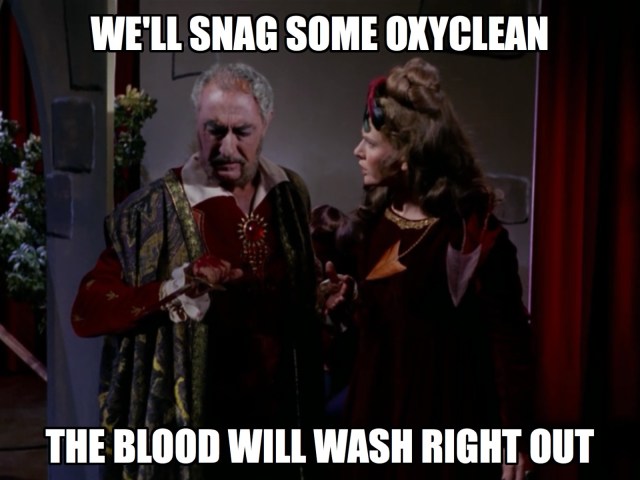 The angry audience guy cryptically growls out, “It’s Kodos the Executioner!” and the opening credits roll.

Meanwhile, the Enterprise is taking a detour to Cygnia Minor, where Dr. Thomas Leighton (the guy with the eye patch) has called about a miraculous new food source.

But when Kirk lands, he discovers that he’s been duped! Dr. Leighton actually wants Kirk to investigate an actor from a Shakespearean play company who MIGHT be an evil mass murderer (and a thinly-veiled fictional Hitler)! 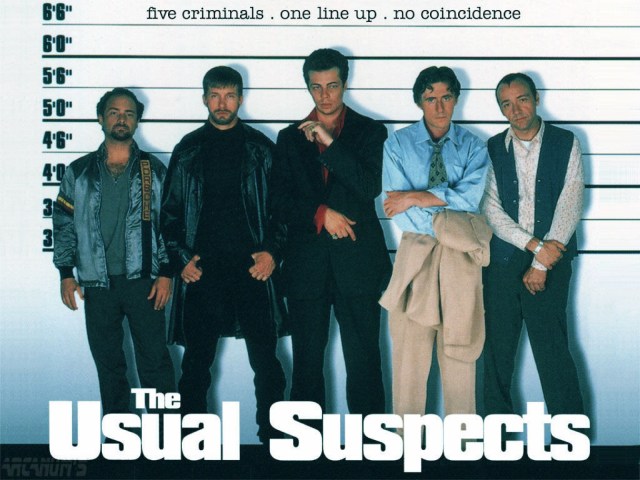 Turns out this Kodos guy is a really terrible person — he’s responsible for practicing eugenics and killing half the population in an Earth colony he once governed. The authorities only found a burned body — it was never positively IDed.

Kirk’s royally pissed off that he’s been called away from duty for speculations based on no evidence. But Leighton is fixated on vengeance. 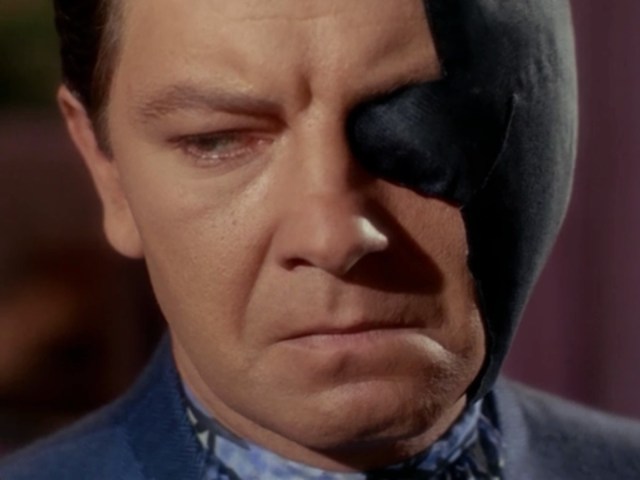 If you wrong us, shall we not revenge?

Kirk’s convinced that Kodos is dead. Then Leighton drops this whammy: “Then it will be a ghost Martha and I receive in our home tonight. I invited the entire company to a cocktail party.”

Oh snaaaap! This sounds like the perfect setup for some real-life Clue! 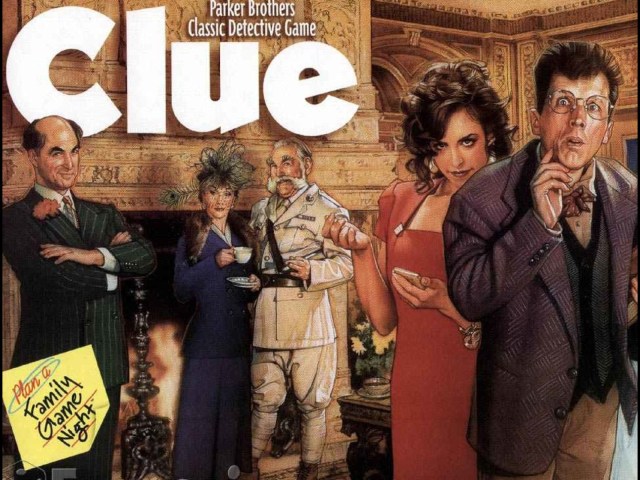 It was Bones in Sick Bay with a Candlestick. *cough*

To make things every more mysterious, only nine people have ever seen Kodos and survived (including Kirk and Leighton).

After consulting Siri on his voice-activated computer, Kirk determines that the actor, Anton Karidian, might actually be Hitler. 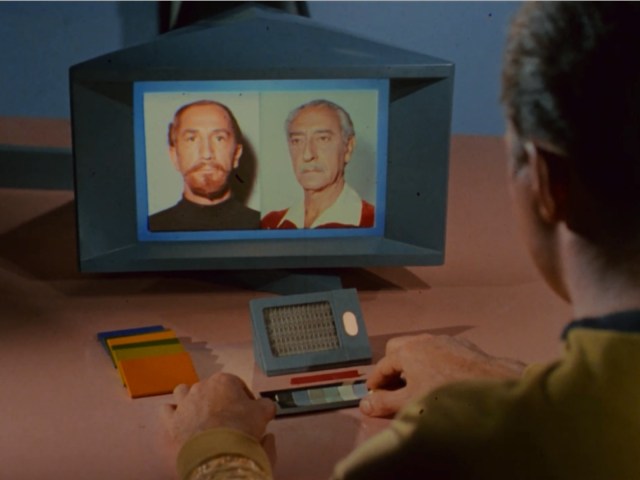 Kirk gets his James Bond on by visiting the party and seducing the actor’s daughter, Lenore. Who oddly enough, played the Lady Macbeth to her father’s Macbeth. Weeeeird.

They go outside and almost smooch, but then Kirk spots a dead body. Talk about a buzz kill. 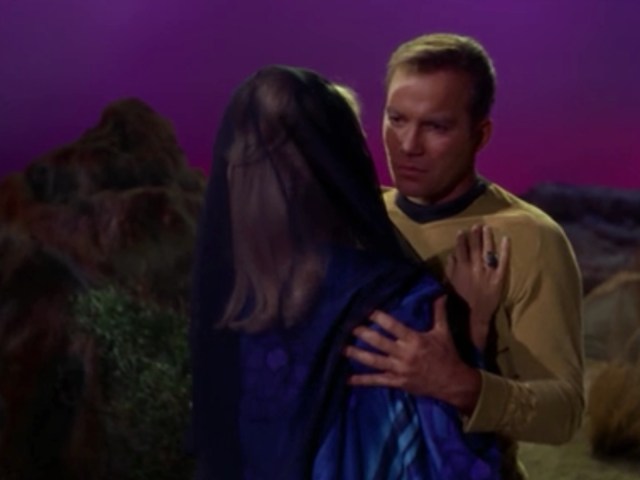 Not in the mood anymore!

The Game is On

Kirk is ultra suspicious now that his friend has turned up dead. He secretly cancels the acting company’s transportation off the planet, so that they’re forced to hitch a ride with the Enterprise.

For some reason, Kirk tells Spock about his suspicions. When Lenore shows up in her fancy sparkle duds to ask for a ride, both Spock and Yeoman Rand glare daggers at her. 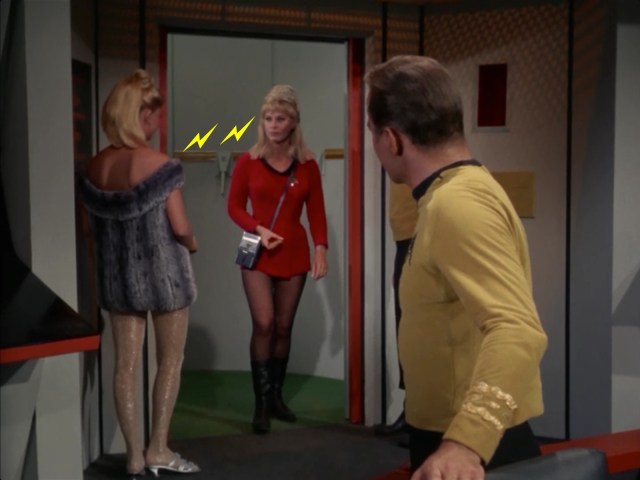 And do you remember Riley, the terrible singer from the fifth episode, “The Naked Time“? Well turns out that he’s also one of the nine survivors of Kalos’s genocide, one of the few who could positively ID the man. To protect Riley, Kirk has him reassigned from Communications to Engineering, which just looks like an awkward demotion to everyone who doesn’t know WTF is going on.

Boozin’ it Up in Sick Bay

It seems like Bones is always drinking. Actually, he points out to Spock that it’s been over a week since he’s had a drank. Spock vents his frustrations about how odd Kirk’s behavior has been regarding the acting company. Bones just shrugs it off and keeps hitting the shots. 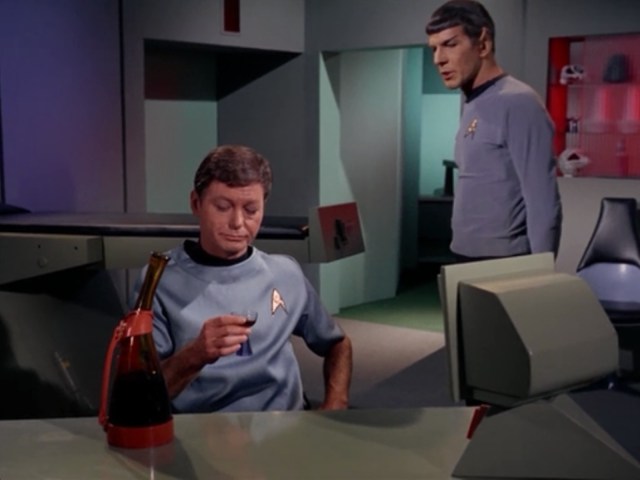 Meanwhile a ton of uncomfortable hetero wooing is going on between Kirk and Lenore, with classic pickup lines like this:

“And this ship — all this power surging and throbbing, yet under control — are you like that, Captain?”

“Caeser of the stars with Cleopatra to worship you.” 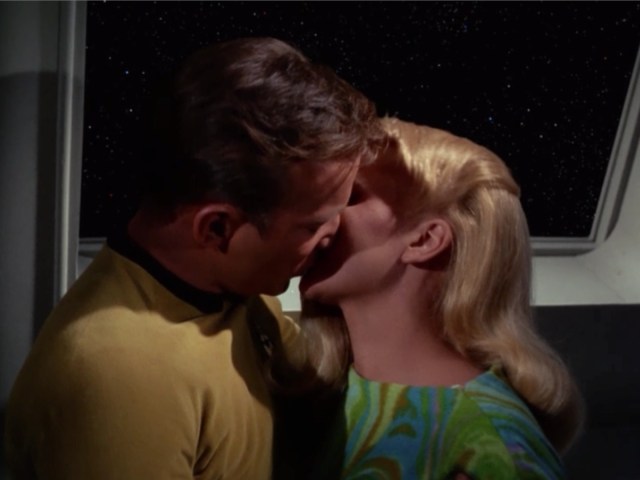 Hmmm, she might not take it so well when you accuse her dad of genocide.

Hide not thy poison with such sugar’d words….hide it in milk!

Riley’s busy goofing off in Engineering, and he’s super emo about being demoted. Instead of browsing Reddit or playing games on his cellphone, he decides to call Uhura on the intercom and ask her to sing him a song.

This is a welcome reversal from “The Naked Time,” when he was singing obnoxiously into the intercom! 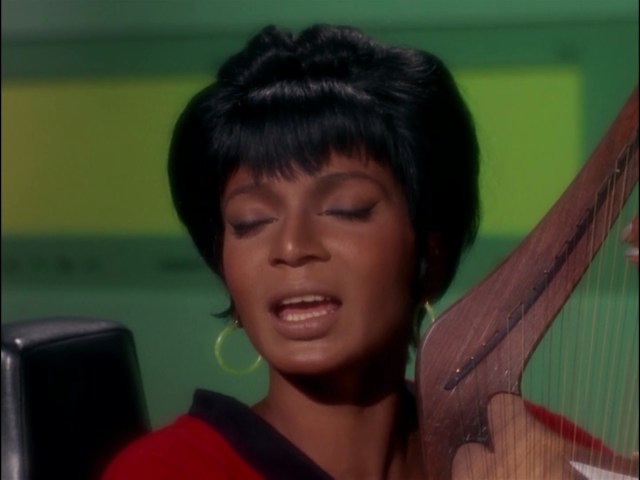 Uhura rockin’ it on the Vulcan lyre.

She sings a sweet song about how love lasts forever, “somewhere beyond the stars.” Do I hear some foreshadowing? 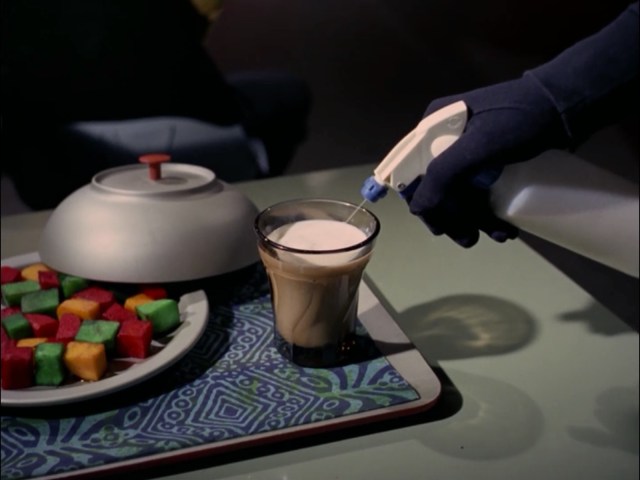 Well, at least they didn’t do it Hamlet style and pour the poison into Riley’s ear. Of course he chugs the drink down. He manages to call for help over the intercom before he collapses. 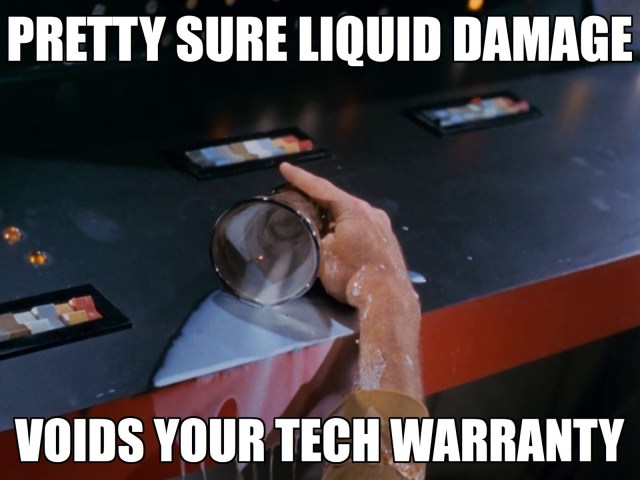 Those control panels are really expensive!

Spock snooped through Kirk’s browser history and discovers the connection between Leighton, Riley, Kirk, and Kodos the Executioner.

Bones and Spock confront the Captain in his quarters.

After Riley’s poisoning, it seems obvious that the acting company is trying to cover something up! Or as Spock explains:

“Even in this corner of the galaxy, Captain, two plus two equals four!”

Kirk’s miffed that Spock and Bones are digging into his personal history. 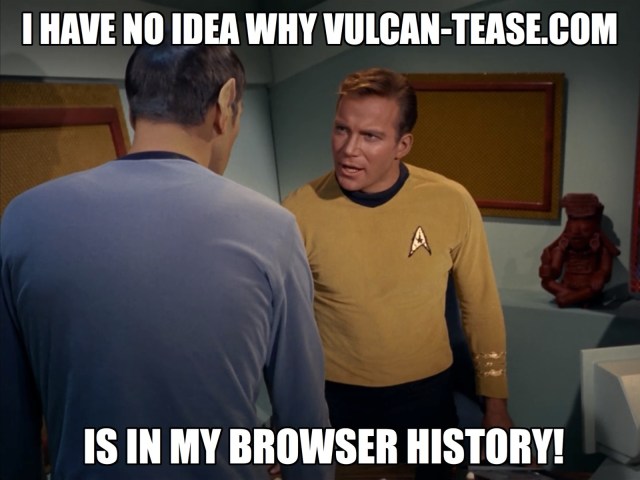 Bones asks if Kirk’s been keeping secrets because he actually wants vengeance, instead of justice. 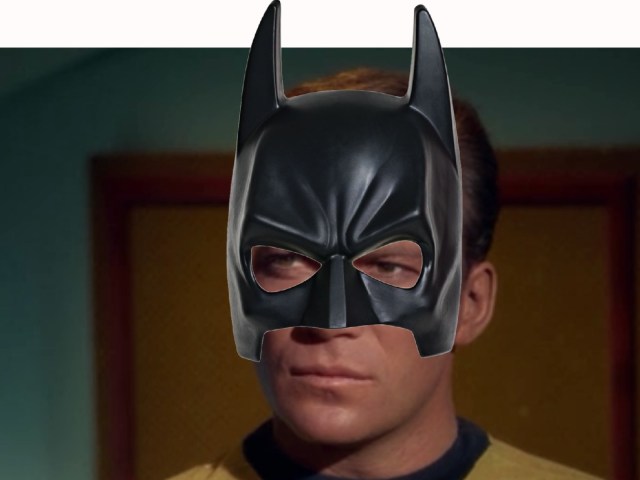 I AM VENGEANCE. I AM THE NIGHT. I AM BATMAN!

Suddenly, a weird humming noise fills the air. It’s the sound of a phaser set on overload! Guess what happens if you don’t turn it off? A giant explosion! Seems dangerous, especially if you’re on a starship!

Kirk announces a “double red alert” to evacuate the area, while he and Spock search anxiously. Once the sound becomes louder, Kirk kicks Spock out of the room to protect him. Awwwww! 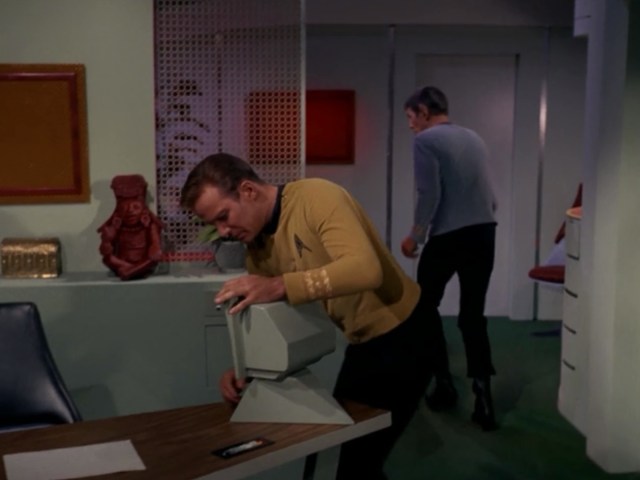 Kirk: SIRI! Help us find the explosives! Hurry!
Siri: Sorry, I didn’t quite catch that.

Turns out the rogue phaser is hiding in a light fixture. Kirk find it and scrambles to toss it down the pressurized vent garbage disposal. Guess it’s well contained, because the phaser explodes and the ship is okay.

A Murder Most Foul

Kirk rushes off to confront the actor, Anton Karidian. The guy speaks in riddles, saying confusing and infuriating shit like, “I am Kodos, if it please you to believe so.” 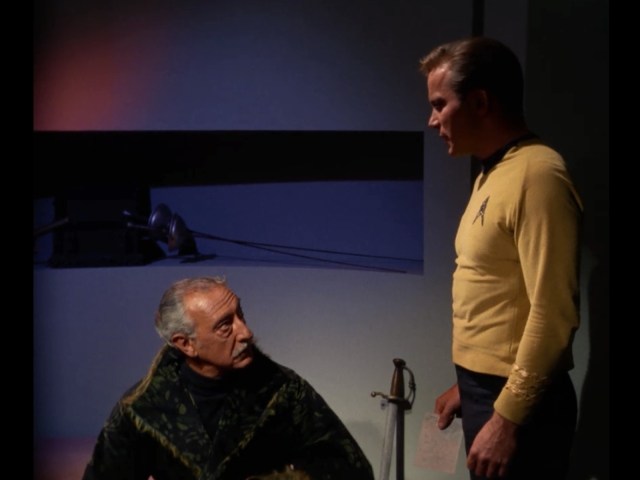 Kirk: So wait, are you actually Hitler?

We never get a clear answer, and Lenore bursts into the room and shames Kirk for using her to learn about her father. I can’t help but worry, is she gonna go all Lady Macbeth on us?

Meanwhile, Riley’s been recovering quite nicely in sick bay. Bones is dictating notes onto his computer, when Riley overhears that Kodos might be on board. Y’know, the evil ruler who killed Riley’s entire family, leaving him as the sole survivor? Great way to be discreet, Bones! Riley breaks outta sick bay, steals a phaser from the armory, and goes huntin’ for Anton Karidian. 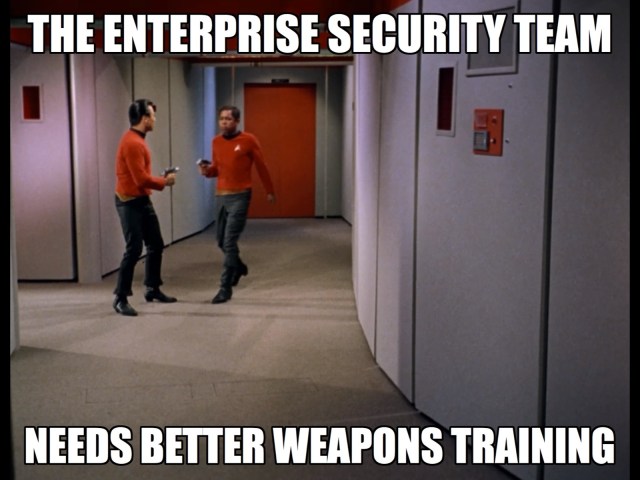 Lol bro why you pointin’ that gun at me? (Maybe this is why the Red Shirts keep dying.)

Kirk finds Riley, who’s about to shoot Anton Karidian, ironically during a performance of Act I Scene V of Hamlet. 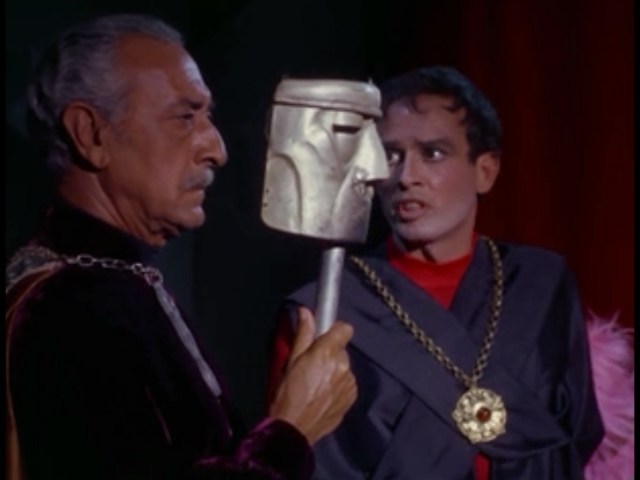 I’m a ghost haunted by his past mistakes! Remember how Leighton called Kodos a ghost at the beginning of the episode? IT’S ALL ADDING UP!

Kirk hides behind the scenes, and watches as Lenore confesses that SHE’S been killing off all the living witnesses to Kodos’s genocide, in order to protect his identity.

Her father is horrified, because he took the Shakespeare acting gig to clean up his life and keep his child away from the pain and horror he inflicted. Despite all his efforts to shelter her, Lenore still became a serial killer.

Kirk jumps out to arrest both of them, but Lenore grabs a phaser. 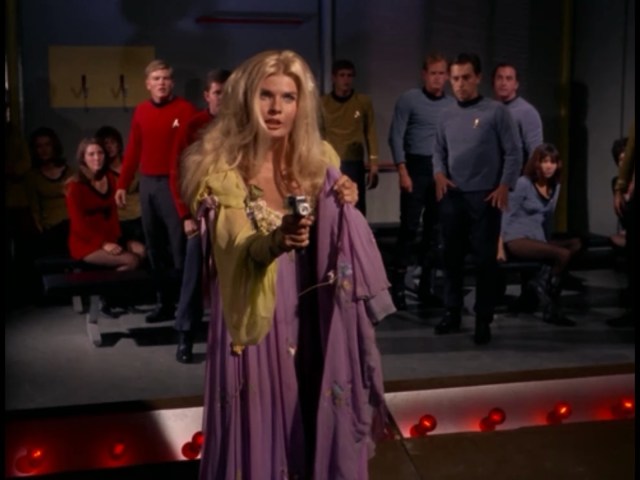 “I WOULD HAVE KILLED A WORLD TO SAVE HIM!” Ohhhh yeah. You’re guilty.

Kodos / Karidian realizes that he effed up and needs to undo his mistakes. He dives in front of Kirk and takes a bullet for the Captain. 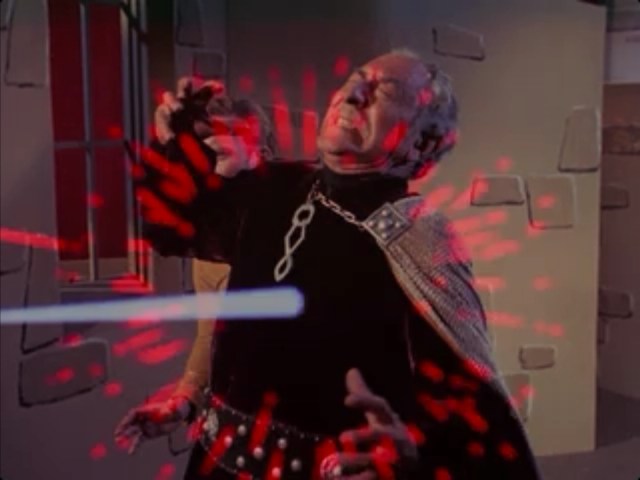 Tragic character sacrifice for redemption. Who wrote this, Shakespeare?!

Lenore loses her marbles, and collapses over her dead father, spouting off play quotes.Really? You’re gonna keep quoting lines when you just dusted your father? 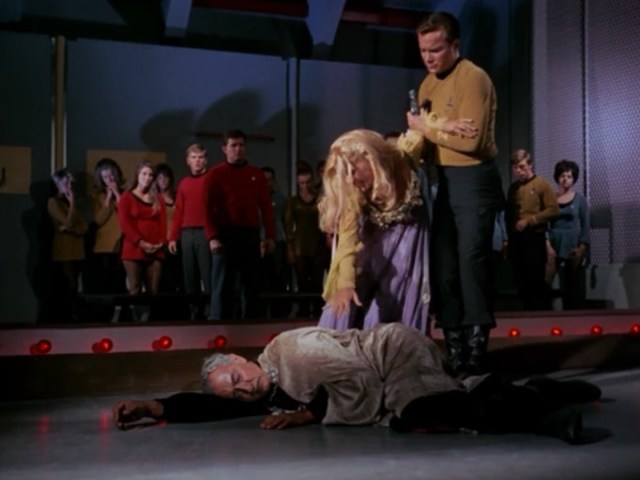 All right folks, the show’s over. Also Kirk, you should probably keep that phaser away from her.

The episode ends with Bones giving a medical report on Lenore, who seems to have suffered from a total break with reality. She thinks that her father is still alive and acting on stage. Yikes. They’re pretty vague about where Lenore’s heading after this.

Bones asks Kirk, “You really cared for her, didn’t you?”