I know it was only a week off but I found myself missing these loony tunes. So let’s stop wasting time and hop into this recap of Legends of Tomorrow Episode 609, “This Is Gus.”

When we last left the Legends, they had finally saved Sara from Bishop the Baddie so she could rejoin the efforts to round up all the aliens that were scattered throughout the timestream. As Gideon gathers the team for her co-captains, she reminds Behrad that it’s his 25th birthday and Spooner tells them she souped up her alien laser gun.

When Behrad rolls in late but having eaten breakfast, Astra claims victory over a bet she had with the rest of the Legends; because she’s clearly been paying attention to his habits. 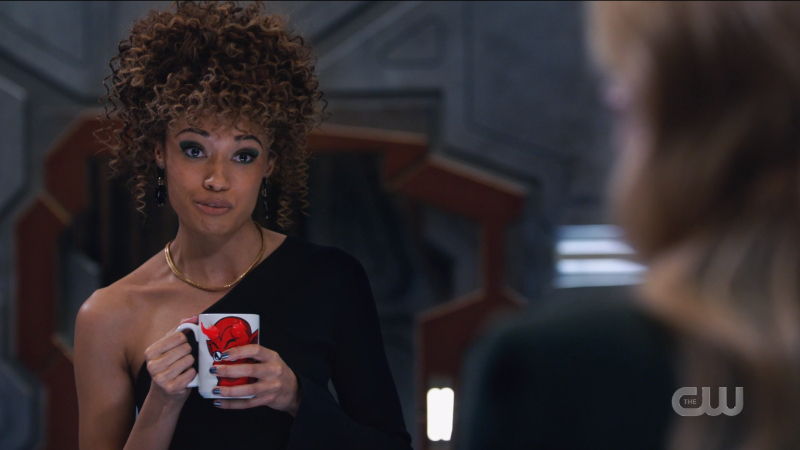 Side note: Her mug has little 3D horns and I love it.

Also this is neither here nor there but when Behrad strolled in, he joined five ladies and Gary at the computer and I just really like the ratio we have going on without Constantine.

Ava tells the team they’re going to Vancouver in 2023 to stop a potential alien invasion and tries to hype them up and it’s adorably awkward and Sara is just so happy to be back with her dorky fiancée. 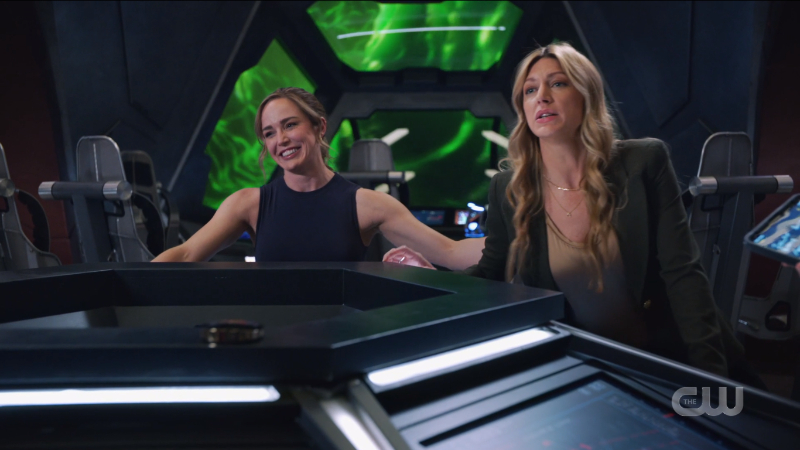 And I’m sure Ava is glad to be reunited with those arms + tank tops.

Before the team all heads out, Mick calls Lita and she asks to see him, so he steals Ava’s portal watch and she walks into the Waverider… and is very pregnant.

Everyone is surprised, perhaps especially Nate who is newly back from his staycation in the Air Totem with Original Zari, but Sara knows this isn’t a time for everyone’s opinions, so she shuffles everyone except Mick and Ava out into the Vancouver filming lot.

Lita and Mick are both big mad and yelling at each other, Mick because she’s pregnant, Lita because he’s been MIA for a year. But Ava steps in and plays ref, asking them both to settle down why they try to figure this out, together. 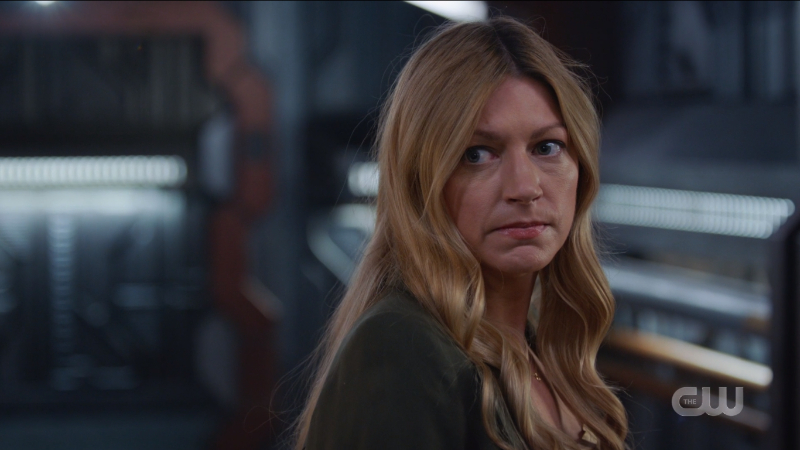 I bet Ava didn’t love the idea of being split up with Sara so soon after reuniting.

In 2023 Vancouver, Behrad sees his idol, Imran, and realizes that they’re on the set of his favorite pot-themed sitcom, Bud Stuy, and he thinks this mission was a fake set-up for a birthday surprise. Zari realizes with guilt that she totally forgot it was her brother’s birthday, which I think she should give herself a break because time is a weird soup when you’re living in a linear timeline, let alone when you’re a time traveler. But her guilt makes her go along with Behrad’s assumption that this is all one big surprise party, and blessedly the rest of the Legends play along.

When they get into the mostly empty studio audience, Astra is confused about why this is Behrad’s favorite show. Zari explains that it was cancelled after two seasons, but Behrad says it amassed a small cult following. “Bud Stuy’s charm was that it wasn’t trying to appeal to everyone.” Which is very meta for this unapologetically queer, unapologetically wacky show.

Zari does not look amused by this pot-themed sitcom (especially not the dig at Dragon Girl) but she sits there looking only mildly annoyed, for Behrad. 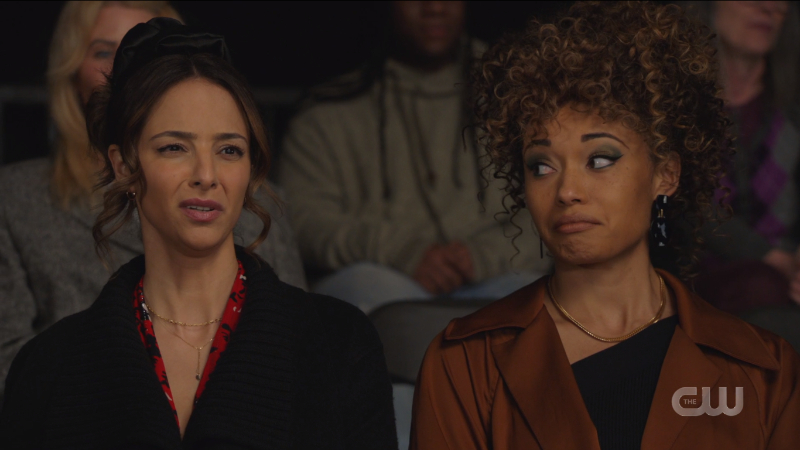 This friendship pairing remains one of my all-time faves.

Meanwhile, Sara and Spooner are off on the original task, and spot the alien pod rocketing toward the ground. Spooner whips out her new and improved alien blaster and shoots the pod, but it doesn’t have the desired effect and instead sends the pod careening toward the sound stage. 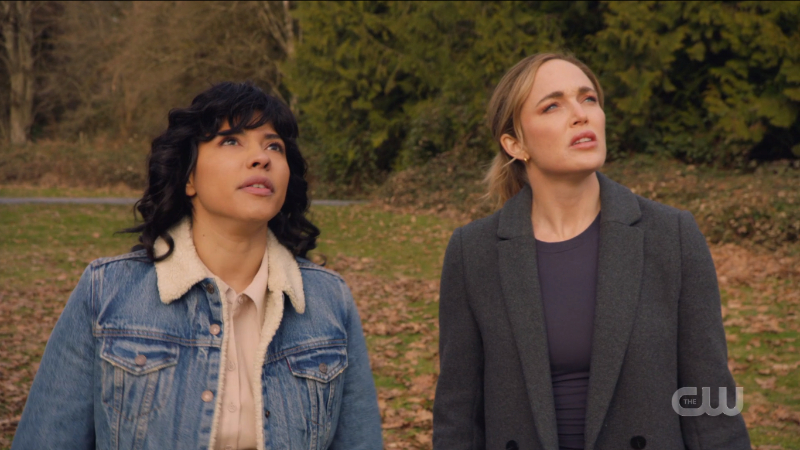 The pod crashes through the ceiling of the sitcom set and a little cotton candy Furby-looking alien comes out. The Imran and his co-star roll with it a little and the audience eats it up, making Imran’s brother Kamran, the director, decide he wants to lean into this direction, despite the Imran’s hesitancy.

Kamran says they need something less “foreign” and when Imran points out that it’s a literal alien and that even a pothead can read between the lines and know what he means is “less Muslim.”

Sara and Spooner catch up to the alien and are relieved that at least it’s cute, as if they learned nothing from Beebo not being quite what he seems. 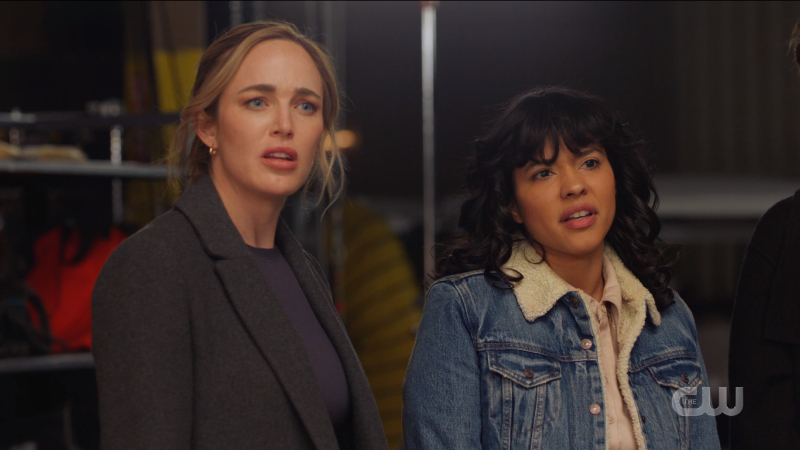 I know that we’ve learned #NotAllAliens but I mean a LITTLE caution would be wise.

Up on the Waverider, Ava is trying to calm Mick down, and he stops growling long enough for Lita to tell him what he missed: She’s vegan, likes Fiona Apple now, she’s not getting married because it’s a patriarchal institution, and she met Nico in a class about intersectional feminism. Which frankly lead me to believe Nico was a woman and this was Lita’s coming out speech, but alas. 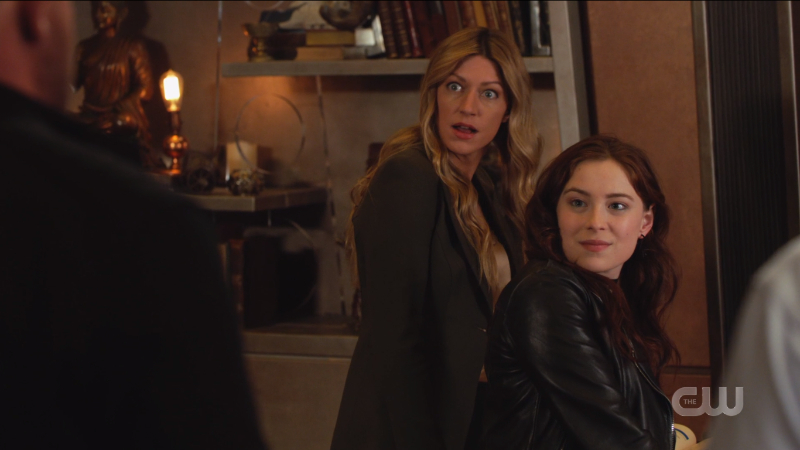 In my defense, Vida and Runaways both had queer Nicos.

Zari and Nate chat about his visit with Original Zari, and he tells her that she mostly just wants to talk about Behrad. Zari 2.0 is ashamed that Original Zari remembered Behrad’s birthday from inside the totem, and Nate’s brain is apparently always made of steel so he doesn’t see that his girlfriend’s doppelganger is hurting.

Behrad continues to awkwardly flirt with Astra, and it’s very cute, but he momentarily stops when she disagrees with him about the Furby. He doesn’t want anything to change and thus ruin his favorite show, but she thinks that anything that would make the show more money makes the most sense.

Behrad tries to intervene by pretending to be a PA in the writers’ room, but Imran doesn’t quite bite, thinking maybe his brother does know best on this one.

Sara finds Furby devouring craft services and tries to tempt it using an Everything Bagel, which, fun fact, would be a great way to lure me into any trap. 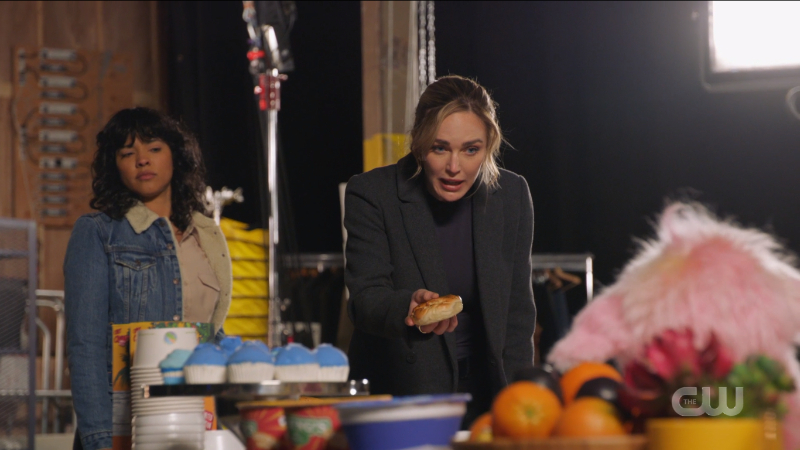 Honestly she wouldn’t even have to try this hard to get me to come toward her with that bagel.

While it’s distracted, Astra grabs the Furby but it starts screaming so loud it makes Spooner’s nose bleed.

So when the director comes to pick it up, making some side comment about it being a prop, they let him take it while their ears recover.

The Legends gather themselves on the Waverider and Behrad looks a little more cleaned up than usual. Astra is a fan, Sara has to double take, and even Zari has to admit he cleans up nice. But when he realizes he’s drinking out of a college mug, they put together that this isn’t Behrad having a quarter-life crisis, but actually the timeline changing as a direct result of Bud Stuy changing.

They show Gary the Furby and he tells them that it’s a Gusarax, which they promptly nickname GusGus. He explains that GusGus probably bonded to Kamran, which is why it didn’t squeal when he picked him up, so they need one of the Legends to bond with it instead. And they have to do it quickly to keep Behrad Behrad. 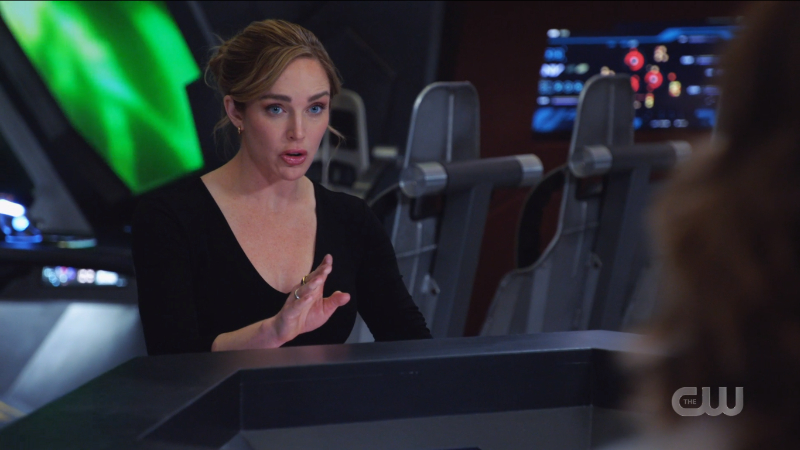 “Behrad was the only man on this ship without any toxic energy and I’d like to keep it that way!”

Zari and Nate go down to try to audition for a role on the show to try to get closer to the alien, and Zari somehow doesn’t get the part but Nate does, to which Zari responds, “Finally a win for straight white men” with an eye roll. 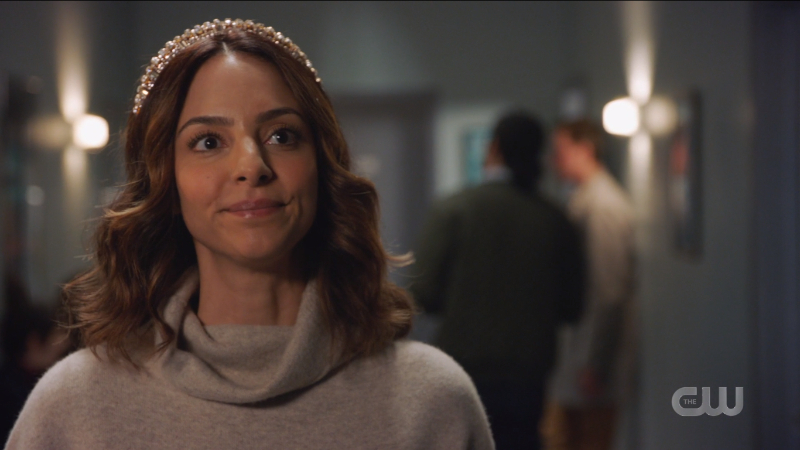 I don’t think I’ll ever get over how far around on Zari 2.0 I’ve come. I went from being extremely hesitant/you’re not my real Zari to loving her to death.

Hating the person he’s morphing into, Behrad finds Imran and tells him that his work is important. That Bud Stuy was the first time he saw himself represented on TV, the first time he fully related to a character, and that it changed his life. And this is why we still shout “representation matters” at the top of our lungs. This is why I don’t want anything to do with people who say things like, “it’s just a TV show.” There are a number of shows that, if time travelers erased them from existence, I would be an entirely different person leading an entirely different life than I am now, just like Behrad is drifting away from his true self and his true purpose as Bud Stuy changes.

Behrad and Imran do the cute little handshake from the show and Behrad hopes he did enough to change his mind.

And it does work… in a sense. Imran confronts his brother and says that the show might not be for everyone, but it’s everything to the people who do get it. To steal a line from the musical [title of show], he’d rather be nine people’s favorite thing than a hundred people’s ninth favorite thing.

But then, he quits. Which is a bit of an overswing of the pendulum.

Next page: GusGus Has Two Mommies