Back on the Waverider, Ava is frantically wrapping presents for Behrad’s birthday. 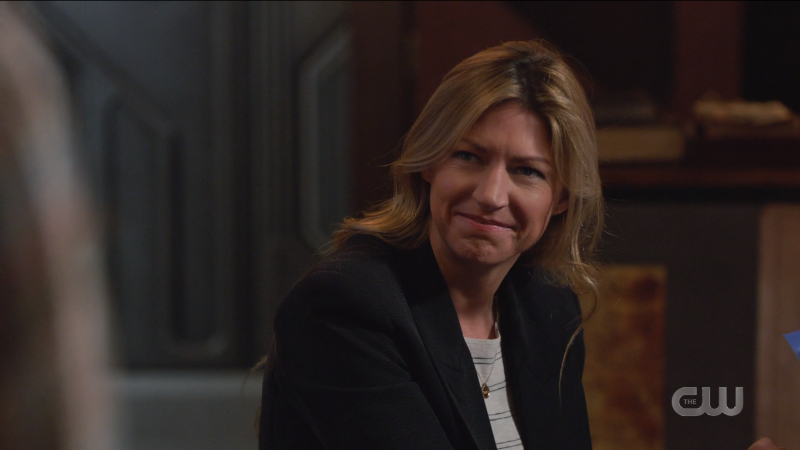 Lita finds her to check on her and Lita says she’s actually doing a lot better. Mick calmed down and even started asking questions about Nico. Very specific questions. Questions that a passing Sara clocks as sounding more like intel gathering than parental curiosity. 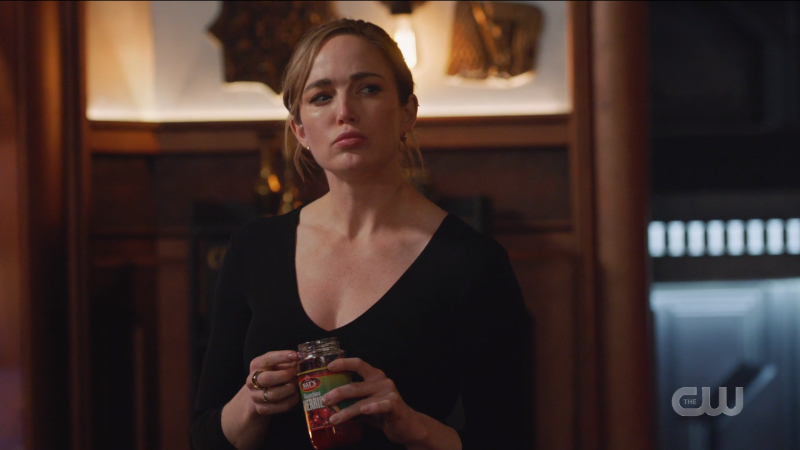 Zari and Astra go to talk to the receptionist to get a meeting with Kamran, and they play saucy cop/bossy cop, which is very fun for me, personally. 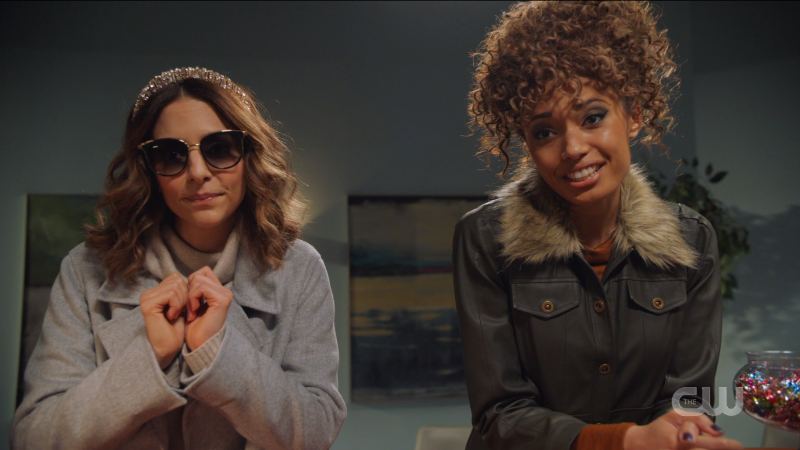 I don’t want them to leave THIS show but also I would watch an Astra & Zari spinoff show.

When Behrad joins the group next, he’s even slicker than ever, which is very concerning for Zari but very appealing to Astra.

They all go in to talk to the director, pretending to be the puppeteer union, but Kamran is quick to give up the ghost about it being a real alien. When they realize that Behrad is on the side of milking this alien cash cow, they decide this conversation could do more harm than good so Zari and Astra shuffle Behrad out of the room STAT. 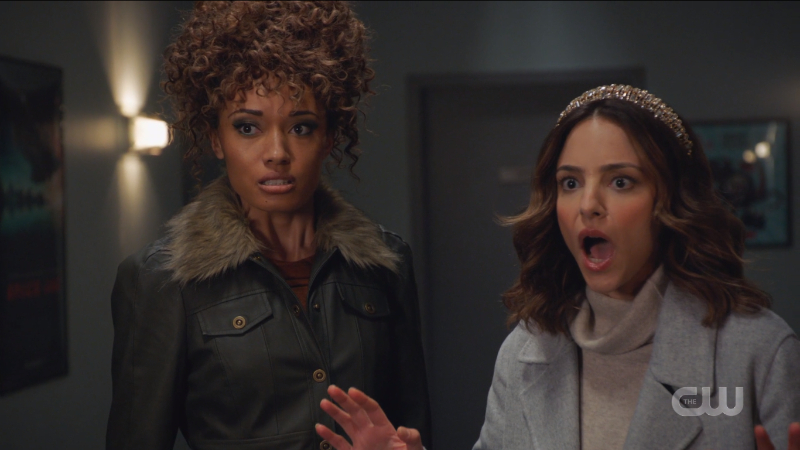 They’re so similar and so different it would make for a perfect buddy comedy JUST SAYING.

When Sara, Gary, and Lita all catch up with Mick to try to save Nico, they catch them actually bonding instead. It turns out they had a heart to heart instead of a fist to face, and Mick confessed how much he missed Kayla. Nico encourages this show of vulnerability, but Gary has concerns about what he just heard.

Behrad continues to get slimier and slimier, and when he goes so far as to call Astra “babe” Astra realizes that not even she likes this new Behrad. Because, quite simply, he’s not the Behrad we know and love.

They also realize that Behrad doesn’t even have his air totem, since this version of him would never join the Legends, so he never got the totem. One by one, Behrad’s things start disappearing, and Zari watches with growing horror. They need to get her brother back, ASAP. She needs to fix this. 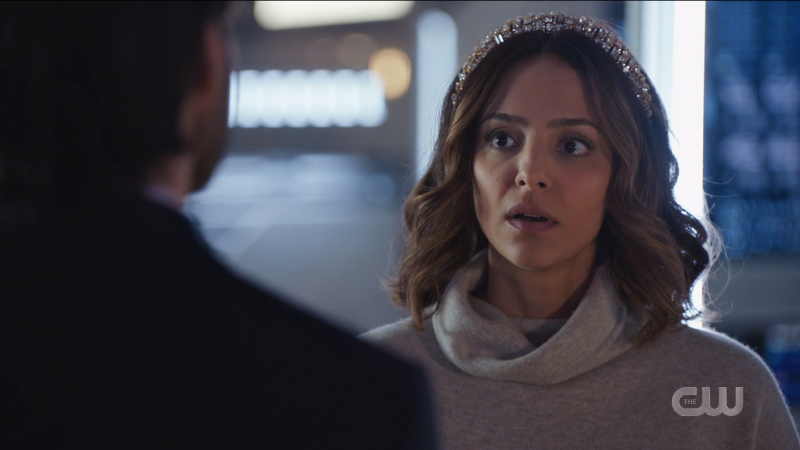 The LAYERS to this woman WHEW

Zari really blames herself for this, she says that at least when Original Zari lost Behrad it wasn’t her fault. And then Original Zari sacrificed herself to save Zari 2.0’s Behrad, so all in all Zari 2.0 is feeling pretty bad about herself even though she’s literally perfect.

Zari confronts Kamran, saying that Imran inspired people, not by trying to make a buck, not by doing what was popular, not even by trying to be inspirational. He inspired other people by being himself. People like her brother. 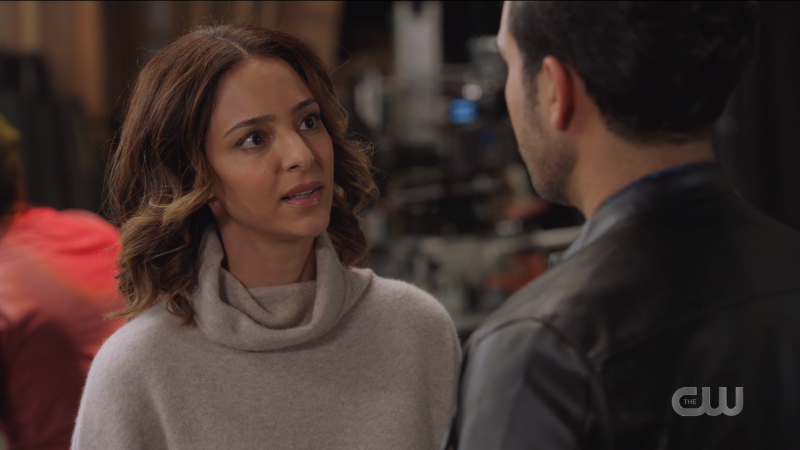 She also says that one show about Muslim people doesn’t have to represent ALL Muslim people and that expectation is unrealistic, which is something I think we should all keep in mind re: representation of marginalized communities. We’re not a monolith.

Meanwhile Astra is taking the slightly different route of chasing Imran in a golf cart, ultimately crashing him right through the wall of the set. The crash sends the baby alien flying through the air and into Nate’s arms, and before Gusgus can start screaming, Imran improvises a perfectly in-character line that sticks to the original vibe of the show. The brothers make up and it seems like things are on track to go back to normal, which pleases Zari greatly. 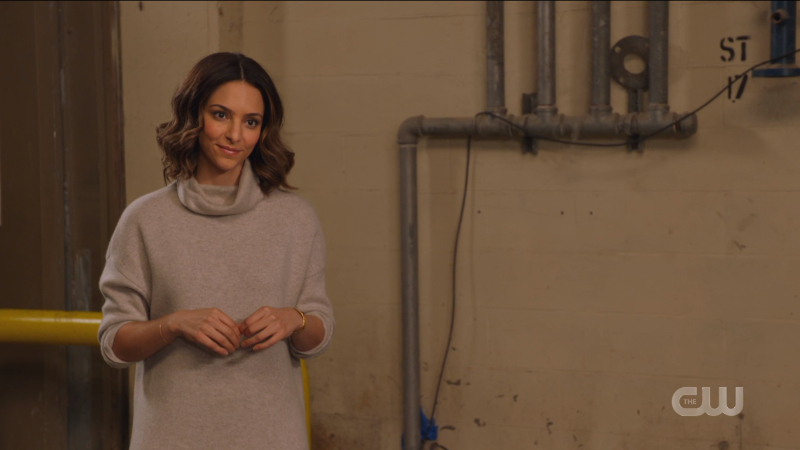 I do not understand how she’s wearing a very large shapeless turtleneck and still looks like a supermodel but HERE WE ARE. And look at that SMILE?! I can’t.

Especially because that means we get our good ol’ Behrad back. They have a surprise birthday party for Behrad, though everyone has to keep quiet because Gusgus is sleeping in a Baby Bjorn attached to Nate. 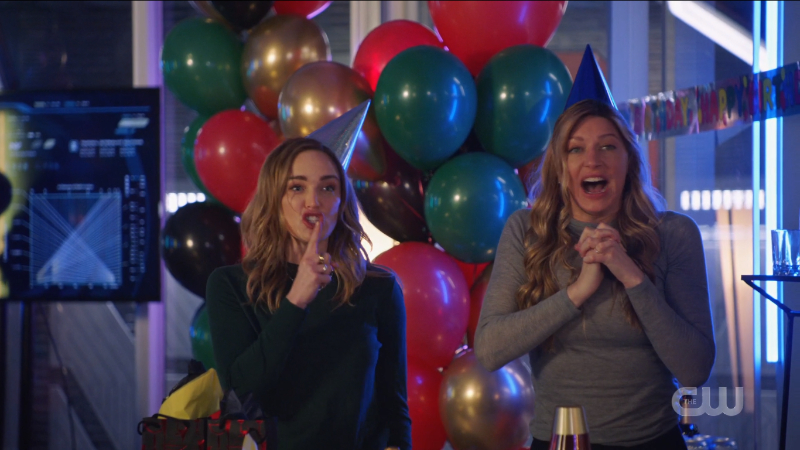 Tfw the two leaders of a team of time travelers on whose shoulders the literal fate of the world rests are COMPLETE DORKS.

Zari does a cute voiceover about Behrad’s weird and special wavelength, and how she loves him just the way he is.

And then it’s revealed that Zari is talking to… well, Zari! Zari thanks Original Zari again for sacrificing herself for him, gave him a chance to live, and wants to thank her for it. She worked it out with the ancestors, who think that as long as there’s only one Zari running around at a time, they can probably take turns in and out of the totem. So Original Zari is going to be back for a few weeks! I personally love this because it’s the best way to get both Zaris without breaking Legends’ CGI budget and also without cheapening the sacrifice made. 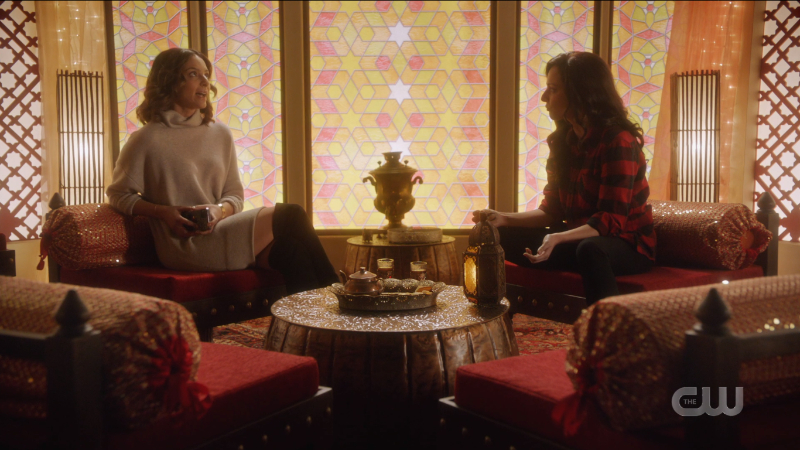 :sings in Vine: Two Zaris, chillin in a totem, two feet apart ’cause they’re not real.

Astra finally flirts back with Behrad, letting him know that she likes him better this way, despite what even she would have guessed just yesterday, and it’s very cute and I’m a fan of this unlikely pairing.

Original Zari comes back and is delighted to get the updates from the team including but not limited to Avalance being engaged. It seems the only person who hasn’t changed much is Mick, but Gary says actually that’s not true, because if Kayla stuck a tentacle in Mick’s ear, that means he’s carrying a brood pouch of baby aliens. Lita wants to put a finer point to it for comedy’s sake and asks if this means her father is pregnant, and when Gary confirms, Gideon gives us a laugh track. It’s perfect. 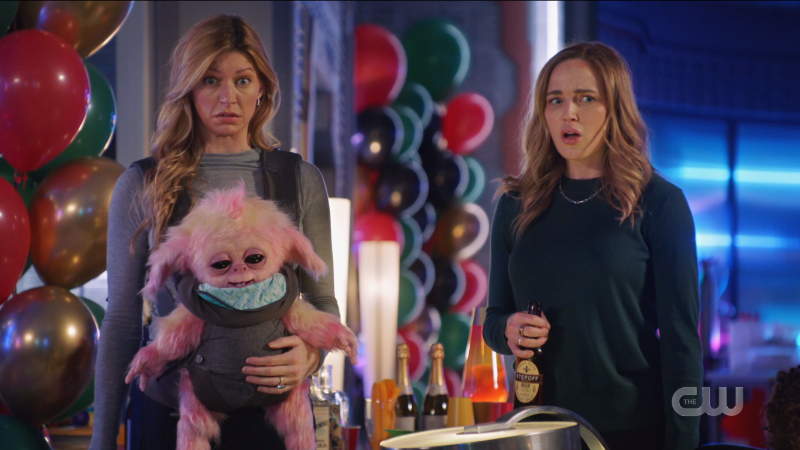 I LOVE THIS SHOW. LOOK AT THIS INSANITY. IT’S PERFECT.

In the comments of these very recaps some of you have been theorizing that Spooner could be the result of Mick and Kayla’s tryst, and even though I’m not sure how the timeline shakes out since I think they picked up grown-up Spooner in 2020, everything is timey wimey on this show so anything is possible, and this new development sure lends a hand to that theory.

Next time on Legends of Tomorrow…baby fever??