Hello and welcome to this rootin’ tootin’ recap of Legends of Tomorrow episode 608, Stressed Western aka the one guest starring and directed by David Ramsey.

We pick up the morning after the last episode, where Ava is bustling around the Waverider, nervous about Sara’s first day back. The team is making her and Mick a very elaborate breakfast while they plan their first mission in a while as a full team. They have a plan to find all the alien pods but for now they just want a good old-fashioned Legends romp to ease Sara back in so things can get back to normal.

Speaking of normal, Astra is off practicing magic while yelling at Spooner who is yelling at Gary for his alien emotions getting all up in her brain, especially when Constantine is grilling him about where the Fountain of Inspiri is. You know, regular stuff! 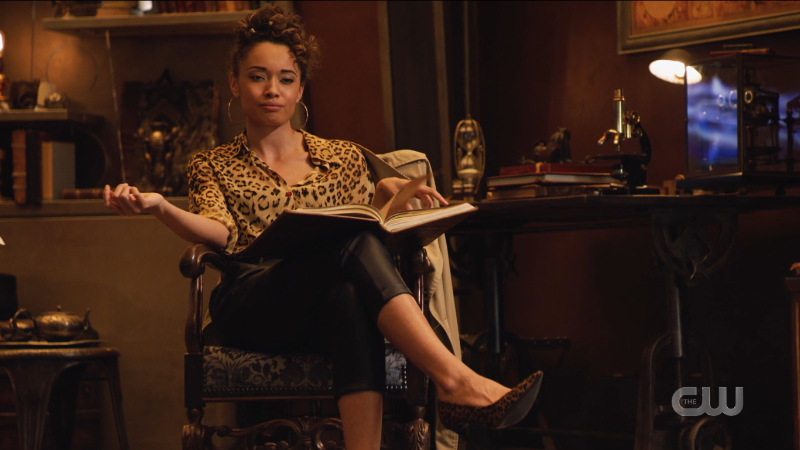 You know, Astra talks a lot in this episode about reclaiming her power, but has she seen the way she sits in a chair? Very powerful.

Ava brings Sara her breakfast in bed, and Sara is so, so glad to be home. Ava tells Sara that she’s here to talk about what happened to her in space whenever she’s ready, but Sara deflects by asking for the Legends goss instead. Ava tells her a little about Spooner, about the whole binder cartoon thing, about Zari’s special smoothie with passion dragon dust in it… 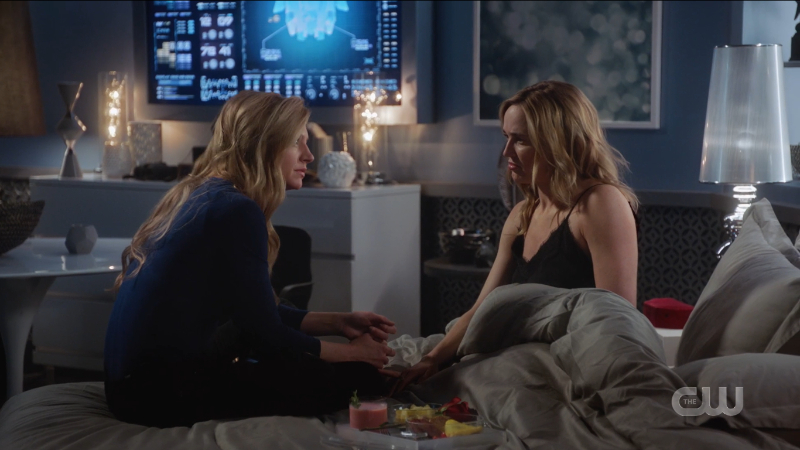 “I know it’s hard to hear, but Wynonna Earp might not get to make all of the seasons you saw in the future.”

But when Ava goes in for a kiss, Sara blurts out that she’s an alien human hybrid clone. Which is great because consent is sexy! Sara plops down on the bed and Ava lays down next to her so they can process like the good girlfriends they are. 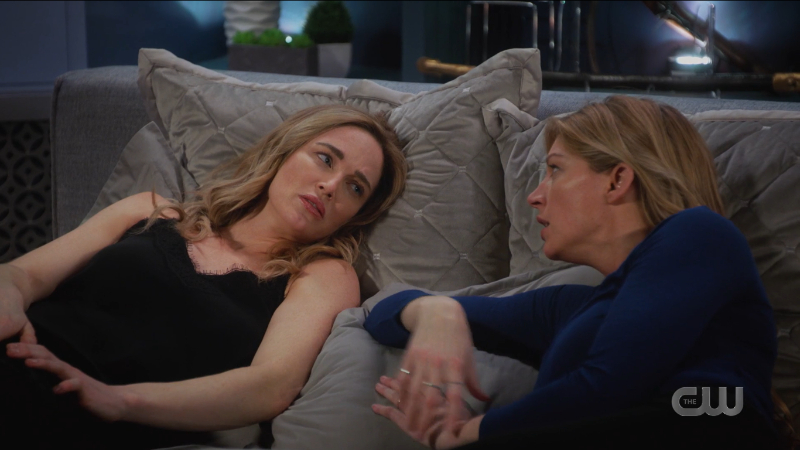 If you’re ever in the mood to get blackout drunk, take a sip every time Sara or Ava calls the other “babe.”

Ava is surprised but not necessarily in a bad way, but before they can discuss further Gideon calls the team together. Before they join their friends, Sara asks Ava to keep this quiet for now, she wants one normal mission before everything changes.

When their captains enter the main room that I’m sure has a name I’ve forgotten, together again for the first time in a long time, the Legends give Sara a round of applause. She smiles a big, warm smile and waves them off and asks Gideon what their next mission is.

Gideon has a sense of humor, because the first place she sends Sara recently-reunited-with-her-fiancée Lance is Fist City. Oklahoma, 1891.

Spooner is adjusting to life with new and improved alien powers and also Alien Gary on the ship, and luckily Gary is standing next to Sara, so when she senses an alien hiding something and also wanting to jump Ava’s bones, they think it’s just Gary being…well, Gary.

Sara uses her expert Nanda Parbat trained vigilante honed distraction skills and throws up a few finger guns as she leads the team through the fabricator and out to the Wild Wild West.

Astra, for one, is excited to be back in a lawless land. She pokes fun at Spooner being a cowgirl and totally ignores Behrad’s advances. Which sets my unrealistic shipper heart a-sailing. Zari notices her brother swing and miss with Astra again, and starts nitpicking his choices, offering to be his wingwoman, and Nate snaps at them all and tells them that they’re supposed to be having a classic Legends romp of an episode and to stop fighting.

Seeing a potential for an enemies-to-lovers pipeline and knowing what trope will help get us there, he makes Astra and Spooner reluctant partners for this mission. 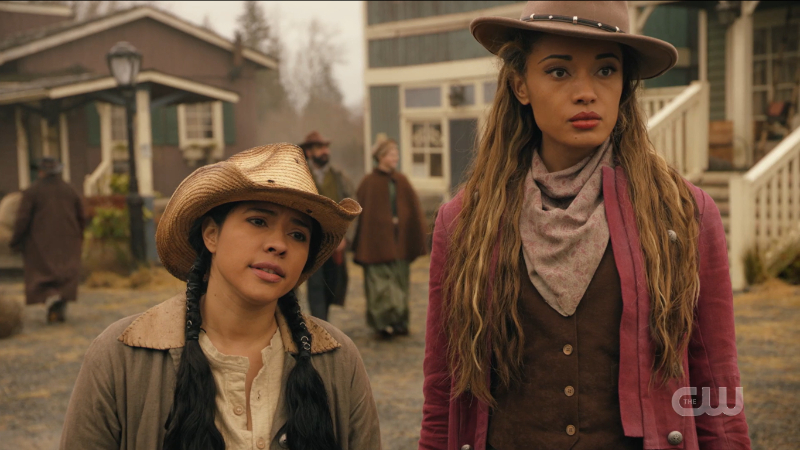 Enemies to lovers and reluctant partners are two of my favorite tropes. THEY’RE ALREADY A TOL AND A SMOL. I hope their next mission sends them to the frozen tundra and they have to huddle for warmth in the only bed.

The team braces themselves for a mess as they bust into the local watering hole, but instead what they get is some Teen Nick version of a saloon; no booze, no swearing, no fighting. A singing narrator sings a friendly tune and the team is rightly wigged out by it. 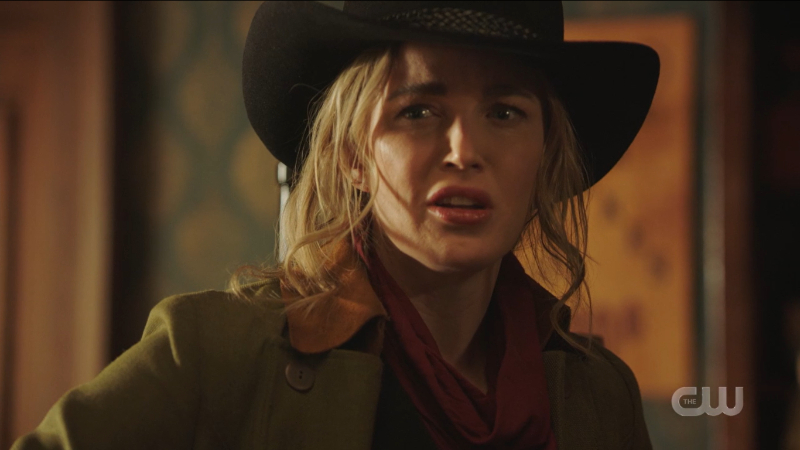 Caity and Jes both share this unique ability to switch from incredibly attractive to absolutely ridiculous with a single facial expression.

Up on the ship, Constantine asks Gary about the Fountain again, and confesses to losing his magic, but Gary nervously says it’s a myth and that Constantine should just give up. Which doesn’t sound much like Ol’ Johnny…

In Fist Town, the Legends are suspicious of the Mild West so they decide to investigate. Astra tries to play poker with a sexist and/or racist asshole who thinks she’s a server and she wants to win all his gold from him, but he’s just playing Go Fish since there’s no gambling allowed in this here saloon.

While she distracts this man, Spooner scans for aliens and Behrad scans for a girlfriend. He does spot a lady fair, but Zari points out that she’s probably paid to smile coyly at him, but another patron points to the sign and “no fornicating” is one of the rules, too.

The woman comes over to flirt more with Behrad, introducing herself as Irma Rose and telling them that the Sheriff is the one who implemented all these rules. 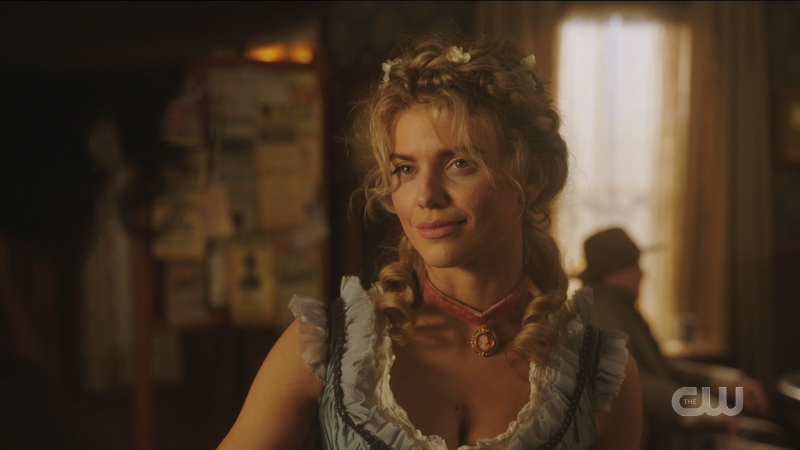 She asks him to play her a tune, and he obliges, causing Zari to roll her eyes at her dorky little brother.

Meanwhile, Sara is pounding back cherry milkshakes like they’re tequila shots and asking the bartender what the situation is here, but he’s very “it doesn’t look like anything to me” about the whole thing. 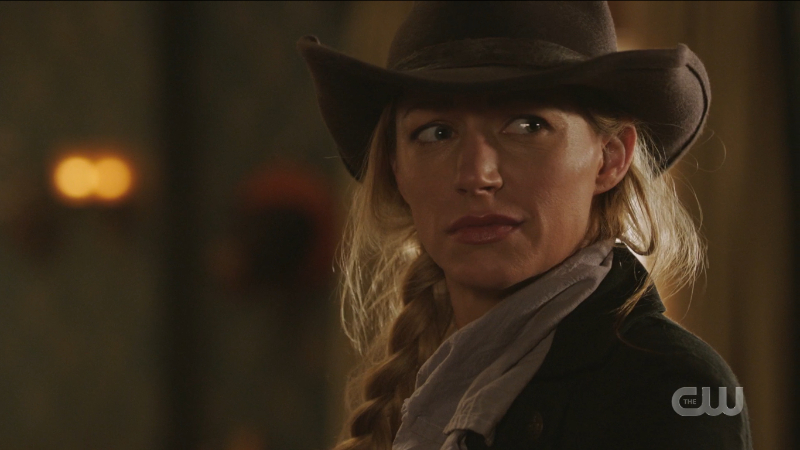 “These not-so-violent delights have violent ends.”

Nate notices a Wanted poster on the wall with Bass Reeves on it, and finds out the Sheriff is Levi Stapleton, and he knows darn well that that’s bass ackwards. There might only be four season of Wynonna Earp in this timeline but he’s learned plenty about the first Black deputy marshal west of the Mississippi.

Just then, the doors swing open and Sheriff Stapleton himself struts in, looking smarmy as hell and asking after the strangers that just rolled into town. Sara tries to ask them questions about how he turned this town into a haven, but he just politely asks them to be on their way.

Next page: More bisexuals and lesbians in more hats!