Ignoring this Legends standoff, Astra follows the man she was trying to play cards with outside to ask the man where he got his gold. When he tells her to “git like a good little girl” she starts to seethe and the ground starts to shake. As everyone runs out to watch this unfold, Sara notices the Sheriff is chillaxin, unfazed and unmoving, even as a giant Tremors-like worm bursts from the ground and gobbles up the guy threatening Astra. Which, frankly, is fine by me. 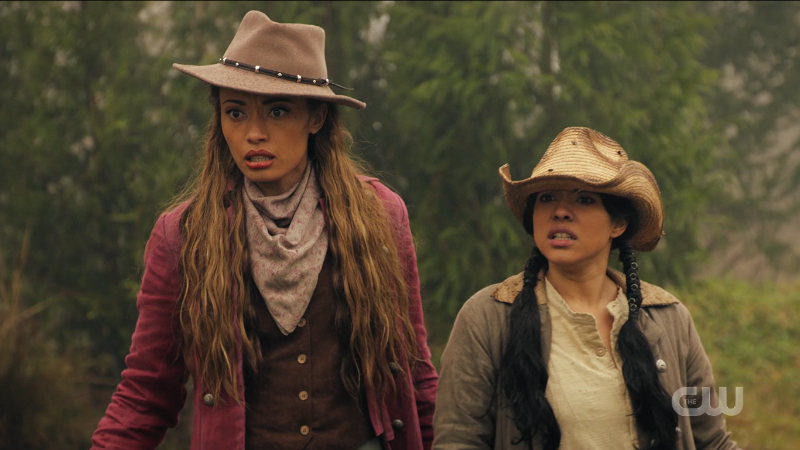 When we were little my cousins and I, instead of “the floor is lava” we would sometimes play Tremors.

The Sheriff walks coolly outside and blows a whistle to get the worm to go away, then he asks the newcomers once again to kindly vacate his tiny town. 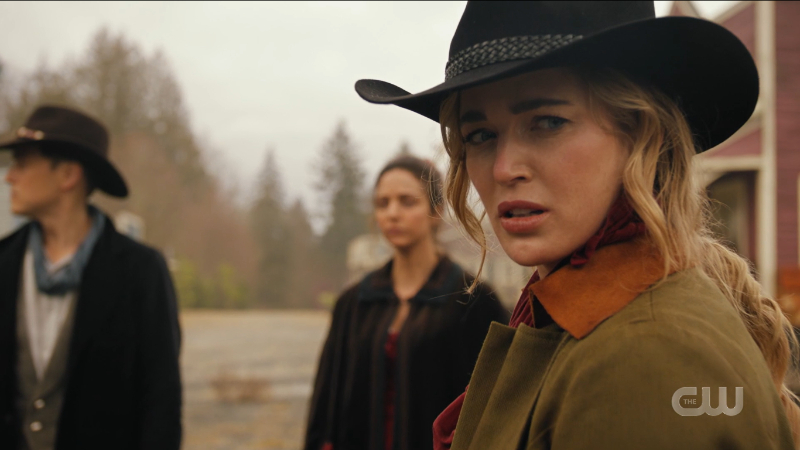 When the Legends go back to the ship to regroup, they ask Gary if he’s ever heard of an alien like that, and he says it’s probably a Haverack, which can only be controlled by the whistle around the Sheriff’s neck. So they know what they have to do…square dance it off him.

One of my favorite little moments of the episode is when Nate’s short stint as interim captain gets the better of him and he tries to give Astra and Spooner orders and they just look at him blankly before plainly asking him if he even has the authority to do that. He agrees it felt weird to give orders and even though Sara gives the same exact orders to stay behind because of their tempers, they don’t flinch at her benching them. It was a nice little reminder that even though Nate is a know-it-all, Sara and Ava are in charge here.

The rest of the Legends start to square dance, and though it’s not how they imagined it, Sara and Ava realize it’s their first dance as an engaged couple….though the dance doesn’t last long as Sara needs another milkshake pronto.

Zari tries her hand at flirting the necklace off the Sheriff, but he catches on and is rude to her, which makes her angry, and makes Constantine angry, and makes ME angry, so the ground begins to shake again.

Everyone calms down and Sara decides the only way to solve this is with a good ol’ fashioned duel. Winner gets the whistle, loser leaves town for good.

Ava is incredibly stressed about this plan, but Sara knows she can stay calm enough to not wake the beast. 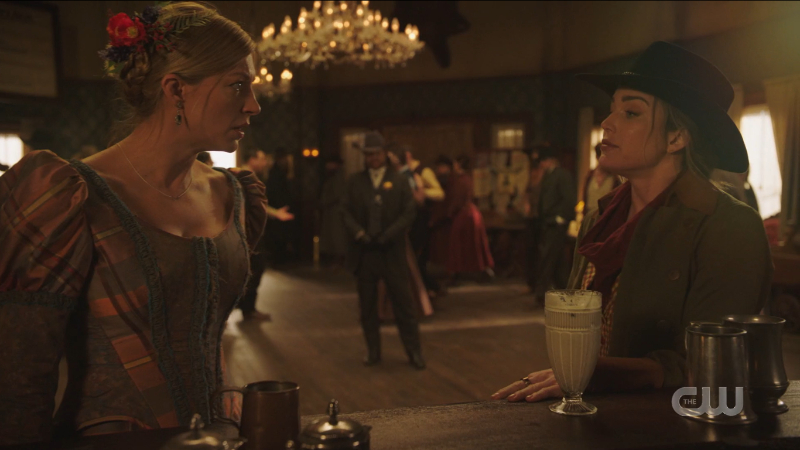 Just because you CAN doesn’t mean you SHOULD, yaknow?

Despite being told to stay put, Astra and Spooner find themselves in the woods, Astra looking for gold and Spooner following Astra. Astra explains that she doesn’t care about the monetary value of the gold, it’s the principle; that man tried to render her powerless and she wants to take her power back. She’s had to fight for her power her entire life; her metaphorical power in hell and her literal magic powers now. She’s not going to just roll over and let some jamoke from a town called Fist City get the better of her.

Spooner can relate to feeling powerless because she lost her mom when she was little and got bounced around the foster care system since no one wanted a little girl with alien voices in her head. Realizing they both lost their moms young, Astra warms to Spooner like this is Batman vs Superman and they decide to work together. 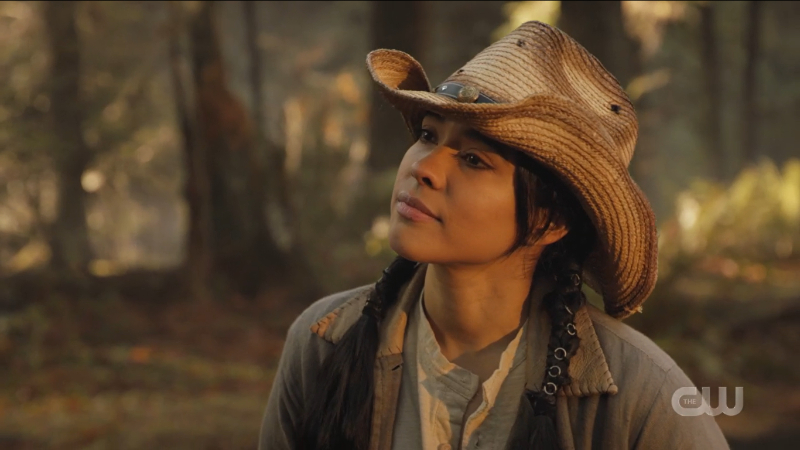 If their moms have the same name I’m going to riot.

While Sara is polishing her pistol for the fight, she notices Ava is acting a little squirrely. She tells Ava to trust her, and Ava does, but that doesn’t mean she’s not going to worry about the love of her life entering a shoot-out in a town with a monster underneath it. 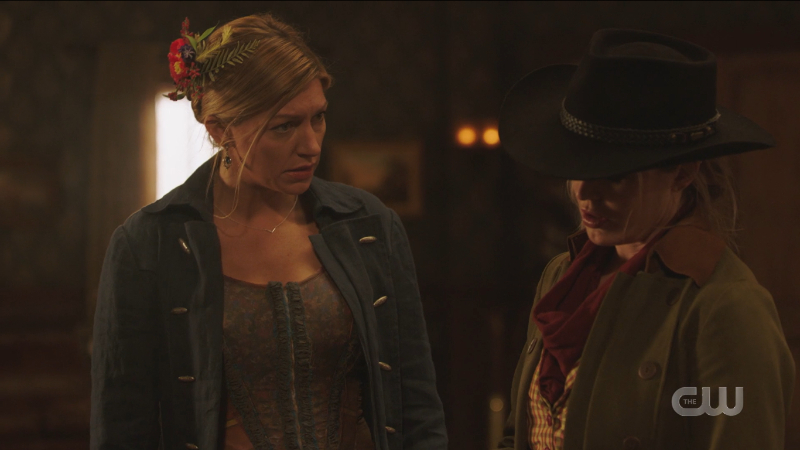 “Just because I know you’ll probably be fine doesn’t mean I want to watch you do this dangerous thing” is also the basis of my D&D character’s relationship with her fictional girlfriend.

Sara is calm, cool and collected while she walks out to her duel. (Wouldn’t you be, if you had cheated death as often as she has?) Sara and the Sheriff start to walk their ten paces, but around pace 6, Stapleton pulls a Clanton and turns around to shoot Sara in the back. 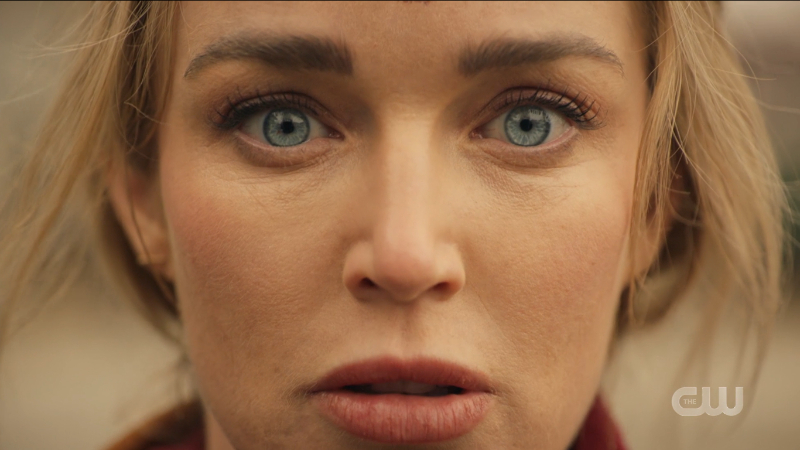 Though he doesn’t hit her in the back, he hits her square in the head, a through and through to the noggin, but just as Sara knew (or at least strongly hoped) would happen, her alien half stitches her right up lickity split.

Stapleton calls her a monster and says it’s not normal to heal like that, and while she concedes it’s not normal she knows one thing to be true, a thing that it’s taken her seasons to learn, a truth universally acknowledged: She is not a monster. 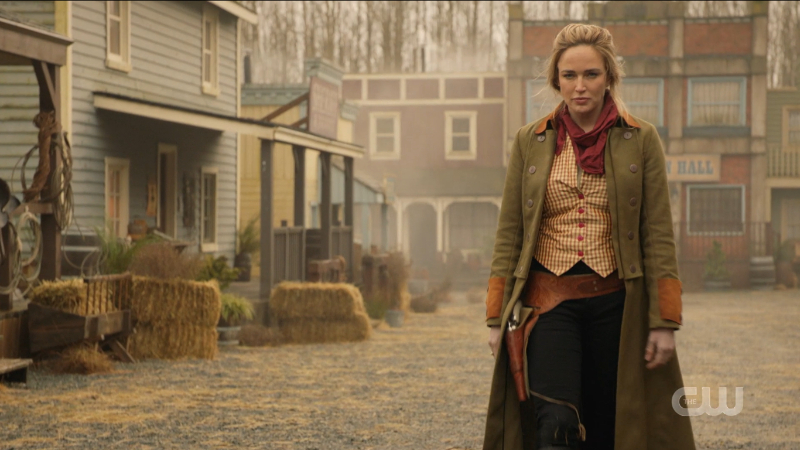 I think Evan Rachel Wood Bisexual would have been proud of this unaffected strut.

He shoots her a bunch as she calmly walks toward him like some kind of Dolores Abernathy and she eventually shoots his whistle off from around his neck. This agitates him enough that he swiftly becomes worm food, and Sara pilfers his hat while Irma scoops up the whistle.

Meanwhile in the woods, the Grumpy Gals follow the gold to the alien’s nest and realize that the worm creature is pooping out the gold, which explains why Stapleton is so keen on keeping it calm. Just then Bass Reeves comes out of the woods, and he is Diggle-shaped. He swears he’s not the villain Stapleton made him out to be and offers to help Astra and Spooner.

Back in town, Irma gets immediately drunk on the power of holding the whistle and starts threatening the Legends, who run inside to avoid being shot. They all look to Sara, who they all knew was good at not dying, but have never seen do THAT before. She throws up her hands and admits that perhaps everything isn’t as back to normal as she and Ava had been pretending.

Cooped up in a stressful situation, the Legends start to bicker a little. Ava and Sara about Sara taking such a risk right in front of Ava’s eyes, Zari and Behrad about sibling meddling, Constantine and Gary about the magic fountain that Gary concedes is real but too dangerous to get to. Nate tries and fails to keep them all calm.

The monster senses this delicious bantering and heads toward the town, Astra, Spooner and Reeves hot on its…well, not heels. Butt? Gold skid marks? They follow it.

Sara and Ava continue to have a little tiff, momentarily forgetting they are in charge here. Astra asks Spooner to help but Spooner says there’s nothing her powers can do. Astra disagrees and tells her to get into the alien’s head instead of the other way around, and, emboldened by this newfound friendship, Spooner tries it.

Meanwhile everyone is outside in a gunfight, and luckily Sara acknowledges that Bass Reeves looks like Diggle (and must be an ancestor, like that horrible Too Many Constantines episode) as Spooner uses her powers to control the worm. Once it’s stable, Astra jumps in for the alley oop and uses HER powers to explode the alien. 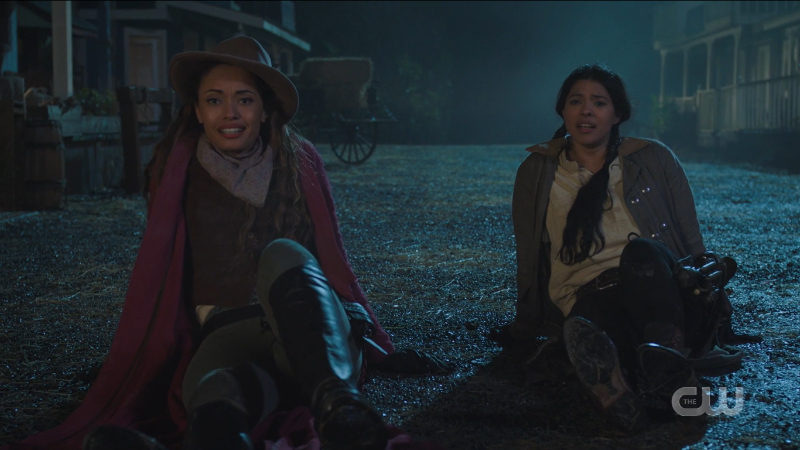 The Legends head back to the Waverider, the singing narrator saying the only fights left are the ones between ’em. But even those are finding their resolutions. For example, Gary agrees to help Constantine get a map to the fountain and sends him off to find it, alone.

Ava brings Sara an apology milkshake and they realize their attempts to make things “normal” backfired, perhaps because things are just different now. But Ava doesn’t think that means that has to be a bad thing. 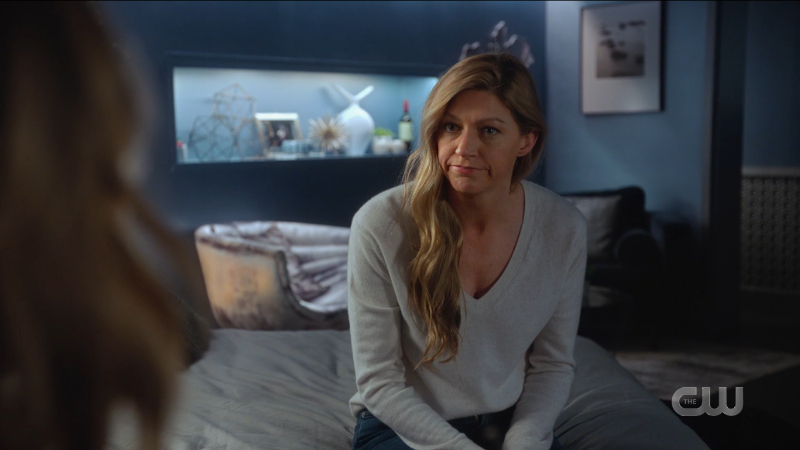 Let’s be weird. Together.

They were never normal to begin with, a vigilante assassin and the head of the Time Bureau, the bearer of the Death Totem/Paragon of Destiny and a Bossy Ava clone. Sara agrees, and jokingly blames the Passion Dragon Ash before tackling her future wife onto the bed. 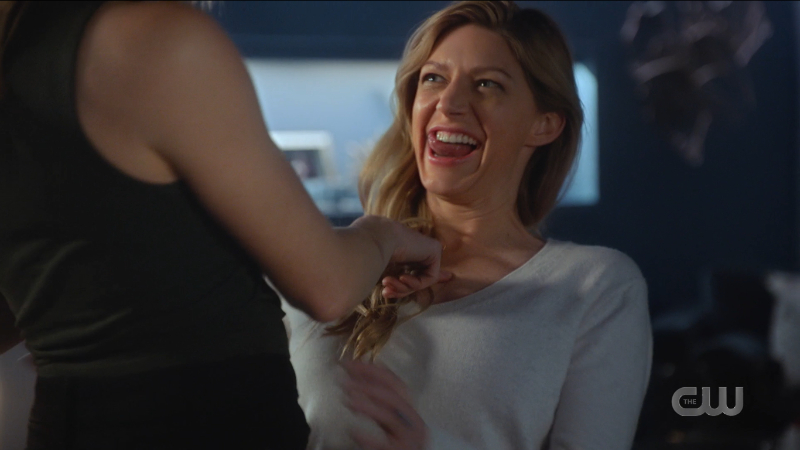 Behrad and Zari make up, too, and frankly that fight was mild compared to the knock-down, drag-out fights my brother and I can have, so kudos to them for figuring it out.

Behrad borrows Zari’s totem and brings the two halves to Nate and tells him that he can use them to visit Original Zari for a little while, once in a while. It might not be traditional, but what about their lives is?

As the Legends settle down, the narrator sings a very profound line. “There might not be a normal but that might be okay.”

And then Ava comes out and tells them to put the cowboy narrator back where they found him or so help her! I love this silly show!!

Next time on Legends of Tomorrow, the Legends are going to save a sitcom, from the inside if they have to! See ya then!