For being one of the oldest terms related to gender nonconformity on the books, the concept of ‘tomboy’ is surprisingly slippery. Cara did a deep dive on it five years ago, finding that while it had initially described “boyish” boisterous behavior in general, it later came to signify boyish behavior as practiced by girls, specifically. Culturally, it’s come to speak to behavior — “tomboys, when they sat still long enough to be described, were pinned as “wild and romping,” “ramping, frolicsome, and rude,” and (my personal favorite) “a girle or wench who leaps up and down like a boy” — and as a subset of that, presentation and dress.

Part of the reason why ‘tomboy’ is so hard to pin down is that in many ways, especially as linked to a sort of oncoming adolescence, is that it felt less in lived experience like a discrete identity and more like a refusal to comply. Cara writes that “Charlotte Perkins Gilman called tomboys “the most normal girl… a healthy young creature, who is human through and through; not feminine till it is time to be.” The idea put forth, then, is that a tomboy is a kid who gets to be a kid instead of a ~girl~ — something which in practice often looks to adults like a girl rejecting femininity or being aggressively ‘boyish.’ Figuring out how to “do” one’s assigned gender is a part of growing up for pretty much everyone, but in both fiction and real life, tomboys get the sense that everyone else is having a much easier time navigating it. In “Reading Like a Tomboy,” Miranda Pennington talks about reading books with female protagonists in part to figure out “how to “girl” properly,” and finding some hope in the characters who also didn’t quite have a handle on this at the same time as she clung to the characters who did, desperate for instruction.

Reading was a great tomboy activity — it didn’t require groups of friends, and was a way to indulge in unrealistically ambitious tomboy hobbies (sword fighting! space exploration!) from the comfort of the backseat of a car. Maybe for this reason I remember, somehow, a body of literature rich in girls and women who loved doing things with their hands and having mildly ill-advised adventures, and who didn’t hate dresses and hair barrettes so much as feel a baffled disinterest. Upon trying to unearth that literature, though, it turned out to in fact be very spotty! So many of the texts I thought I remembered as tomboy lit now felt more like just stories of girls navigating outsider status or sexism, and that I had maybe projected onto more than I realized. Others that were more explicitly about non-normative girlhood now read more as being explicitly about queerness, masculinity or butchness — experiences which are not at all mutually exclusive with tomboyhood, but which seem to imply a certain active identification rather than the borderless, culturally undefined space for possibility that feels like tomboyishness.

Cara describes in her investigation “a ‘12-point tomboyism index’ that included such items as “engaging in loud or boisterous play with others” and “participating in traditionally male sports.” Meant to describe real children, it’s nonetheless a suggestion toward how we might recognize tomboyhood in its various iterations in books — characters are sometimes intimated to be queer or lack an appropriate interest in boys, but not always; they often reject dresses, makeup, bows or the like but might just be less enthusiastic about them than other girls, or less adept; they might have an interest in physical activity or “boys’ hobbies.” They’re often young; the question of what happens to tomboys when they grow up is, culturally, a difficult one. Whereas female protagonists are usually “feisty” or “spunky” — protagonists are always supposed to feel special and different — tomboys in books as in life are often read by others as “difficult,” “surly,” “improper,” or otherwise actually badly behaved.

In the end, the definitely incomplete and scattershot survey of tomboys in literature ends up reaching in a few different directions — older works from the early to mid 1900s which still resonate today because difficulty with “doing girl” were a primary conflict (maybe because in a pre-girl-power world the importance of doing girl correctly was a more explicit expectation), fantasy and sci fi where spunky girls pick up swords and lightsabers, and the more contemporary depictions, with some fictional explorations and the burgeoning genre of memoir on the topic. This isn’t even getting into nonfiction studies on the topic, like Tomboys: A Literary and Cultural History, Tomboys!: Tales of Dyke Derring-Do, American Tomboys 1850-1915, or Sissies and Tomboys: Gender Nonconformity and Homosexual Childhoods. (Also without getting into the category of straight “tomboy” romance fiction, which seems fascinating.)

This list is very incomplete and highly subjective! But seems like it speaks to a persistent need; in researching any writing about tomboyhood, the interest in the literary figure keeps recurring, in Reading Like a Tomboy, The Tomboy in Literature, and concern about the Death of the Literary Tomboy. It’s a need that speaks to wanting to see ourselves as children, but also possible futures for ourselves as adults; as Miranda Pennington writes:

“While there was plenty I could learn from Anne Shirley or Harriet the Spy, I always longed to read about an actual tomboy like me – no long braids, no puffed sleeves, no growing up into a swan after an ugly duckling childhood. Finding a story like that would have given me one way to understand and explain who I was, and perhaps spared me a great deal of trouble.” 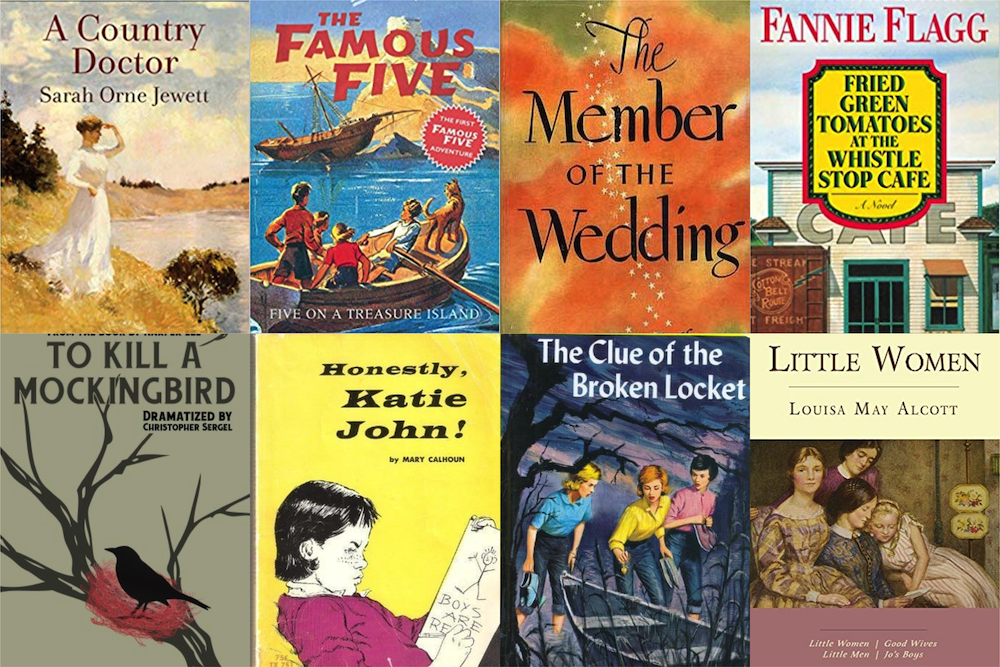 To Kill a Mockingbird: Jean Louise “Scout” Finch tries to navigate the adult world of racism and moral failings, while her Aunt Alexandra begs her to wear a dress and “act like a lady.”

A Country Doctor: As per Cara’s description, Nan Prince “got the tomboy stamp by putting [her career] ahead of (or firmly adjacent to) [her] domestic lives” when she pursues becoming a doctor.

Honestly Katie John: In which Katie John takes on a leadership role in the Boy-Haters Club.

Little Women: Jo March famously exclaims “It’s bad enough to be a girl, any-way, when I like boy’s games, and work, and manners. I can’t get over my disappointment in not being a boy.” (Check out this entire academic paper on Jo as literary tomboy!)

Tomboy: “Gabby strongly resists her parents’ efforts to persuade her that she must give up her tomboyish ways and turn into a proper young lady.”

The Member of the Wedding: In this classic from Southern Gothic master Carson McCullers, isolated misfit Frankie wants people to be able to “change back and forth from boys to girls” and struggles to find a place in her family and community — Frankie goes on to be cited in queer and gender theory texts as a crucial tomboy figure, including Female Masculinity.

Nancy Drew Series: With her classic tomboy name, George Fayne is “athletic” and “less than proper;” she consistently has boyfriends and is shown to wear dresses and care about her appearance, although arguably less interested in “fussy” styles than her friends Nancy and Bess.

Fried Green Tomatoes at the Whistle Stop Cafe: A rare tomboy character who we see in adulthood and also gets to be explicitly queer (at least in the book), Idgie Threadgoode is a blueprint for both tomboy and lesbians in literature, a rare feat.

Five on a Treasure Island: One of the earliest entries and an actual children’s book, we meet “a surly, difficult girl, who tries hard to live like a boy and only answers to the name George.” 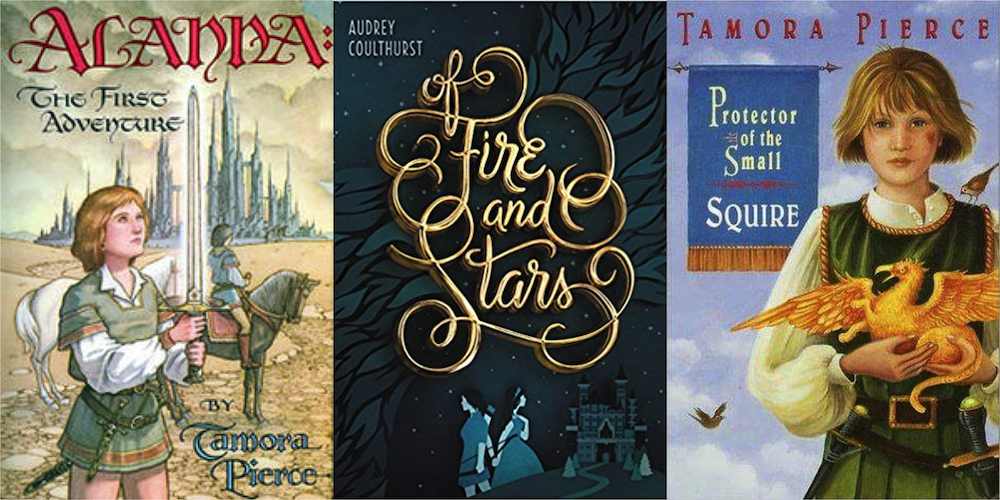 Song of the Lioness Series: The light and hope of so many baby queer readers, Alanna wanted to be a knight so bad that she pretended to be a boy for years to train and become one, and even after she was discovered, was so good at knighting that she got to be the King’s Champion.

Protector of the Small: Also dying to become a knight, Kel lives in a post-Alanna world and can become one without impersonating a boy, which means she has the very relatable tomboy experience of being isolated and ostracized when she pursues her dream.

Of Fire and Stars: Although canonical LGBT rep in YA is (thankfully) no longer scarce, and there are plenty of girls who can use a sword or a bow and arrow, Mare is a welcome example of a princess who prefers wearing leggings and riding horses while acting “surly.” 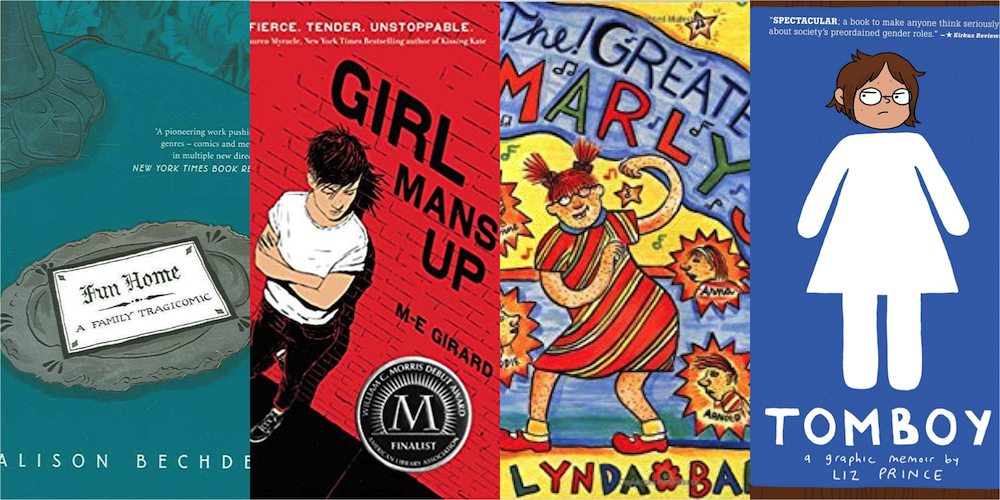 Marlys: Eight-year-old Marlys is the star of Lynda Barry’s classic Ernie Pook’s Comeek, and while Barry doesn’t necessarily describe her as a tomboy, she’s become a bespectacled, boisterous icon.

TOMBOY: An autobiographical graphic novel about Liz Prince’s “ever-evolving struggles and wishes regarding what it means to ‘be a girl.'”

Tomboy Survival Guide: Ivan Coyote’s account of “the pleasures and difficulties of growing up a tomboy in Canada’s Yukon, and how they learned to embrace their tomboy past while carving out a space for those of us who don’t fit neatly into boxes or identities or labels.”

Fun Home: Famously a memoir of Alison Bechdel’s relationship with her troubled, closeted father and her coming of age as a lesbian, Fun Home also chronicles her childhood as a kid who dreads wearing dresses and the feminine accessories that go with them.

Girl Mans Up: As Emma reviewed for us, Girl Mans Up is about gender nonconforming teen Pen, and “the language of our lived experience of moving through and within gender — inching, painfully slow, changeable, delightful, sexy, and made manifest in a thousand tiny ways.”

Please add to this admittedly incomplete listling in the comments! What are your favorite tomboy reads?