The Menagerie. Aside from being a really hard title for me to spell, this was a freaking amazing episode. I was actually yelling, “WHAT?!” at the screen for almost an hour, because it was so suspenseful! YOU MUST WATCH ALONG CLICK HERE OH GOODNESS.

Remember how Episode 1, “The Cage,” was cut from the original airing because it was “too cerebral?” Well, Gene Roddenberry decided to splice footage from “The Cage” into “The Menagerie.” I gotta say, I really wasn’t looking forward to this, because I thought it would be a boring, recycled episode.

Clearly, I just don’t have enough faith in Roddenberry. Because The Menagerie is 110% badass.

Okay, so we join our fearless crew at Starbase 11, which is run by The Federation. Ya know, the big bosses, the UN of the Planets. 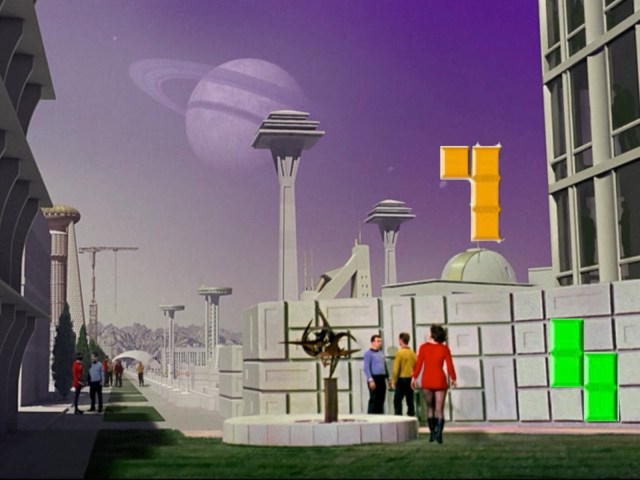 Our architecture is based off an ancient game known as Tetris.

Kirk meets with Commodore Mendez and tells him that the Enterprise has arrived after receiving an urgent call from Captain Pike. Mendez insists that this absolutely isn’t possible. And why not? We’ll, we’re heading to the medical center to find out…

The Future of Disability

Once the crew enters the hospital, we’re reminded to switch off our cellphones and avoid needless chatter in the theater. 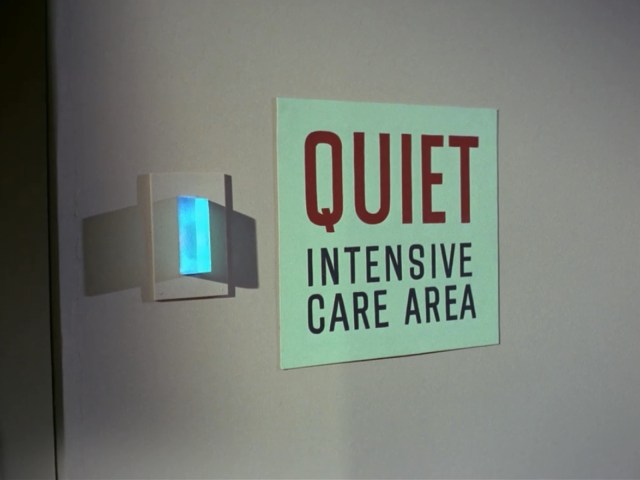 They open a hospital room door and out rolls Captain Pike. 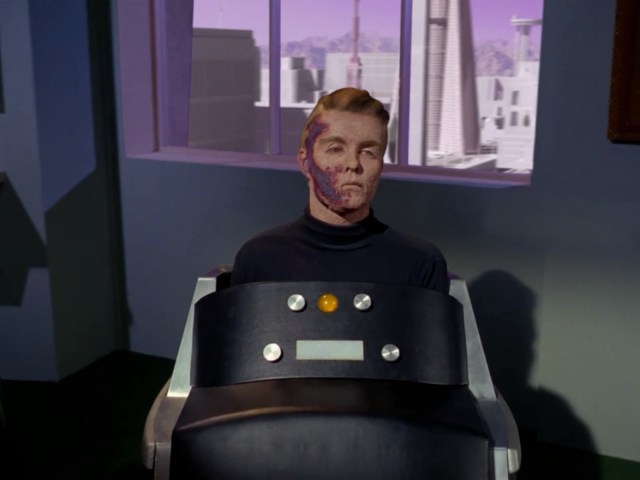 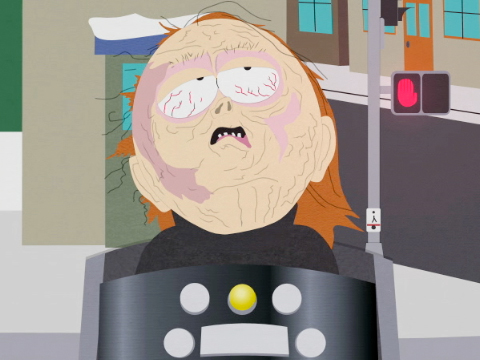 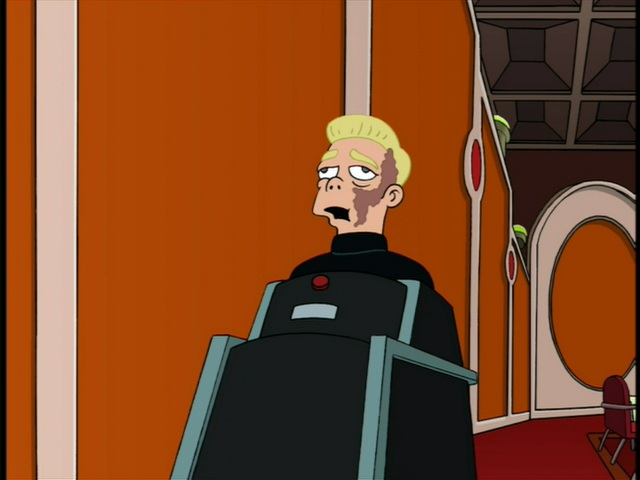 Apparently, this is a very popular wheelchair model.

Okay, let’s pause for a sec. Really, people? Hundreds of years into the future, and this is all the assistive tech we have? I call bullshit! Why isn’t Pike’s brain hooked up to cybernetic parts and computer vocalization? This guy deserves some bionic limbs!

We learn that Spock served with Captain Pike for a whopping eleven years. Jeez, think of all the secrets they must know about each other. Well, Pike is not in the partying mood, because he wants everyone to GTFO — except for Spock. They leave, and I gotta say, the Vulcan looks like he’s steeling himself for something very difficult. 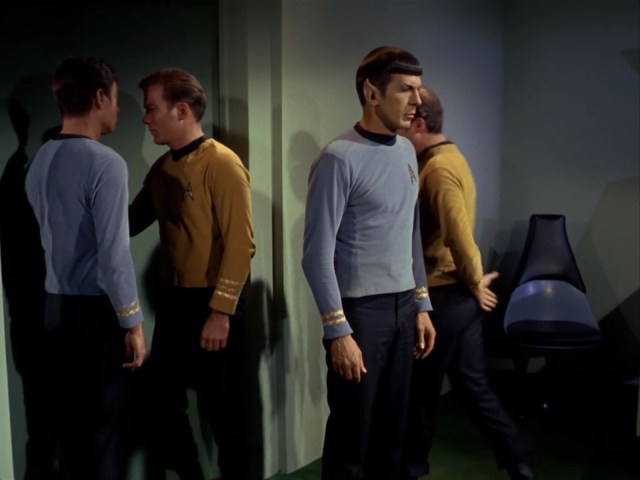 How do I tell him that I’ve found a new captain?

Once they’re alone, Spock starts uttering words that no one would expect him to say.

“You know why I’ve come, Captain… I have it well planned. I know it is treachery and it’s mutiny, but I must do this. I have no choice.”

The entire time, Captain Pike is signaling NO. NO. NO. with his lights, over and over. I got whiplash from how many times Spock shocked me during this ep.

My face from this point on.

Anarchy on the Enterprise

Was Spock’s brain taken over by an alien organism? Is this an impostor? I dunno, but he is sure acting strange! Kirk and Mendez can’t figure out any reason for the fake dispatch that called the Enterprise to Starbase 11. They search all of the floppy disks, and there is no trace of a call. Kirk can’t figure it out — if Spock really wanted a vacation that bad, he could’ve just asked! 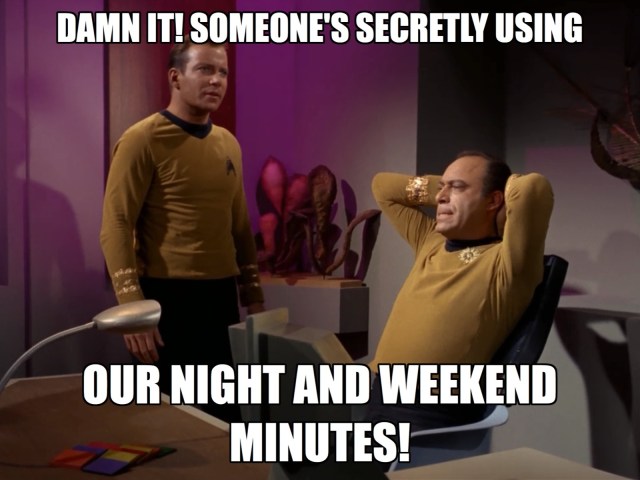 And WHAT the HELL is Spock doing? He’s sneaking through a computer lab and OH SHIT, he knocks the techs out with his Vulcan neck pinch. It’s official, Spock has gone rogue — and his efficiency is truly terrifying! 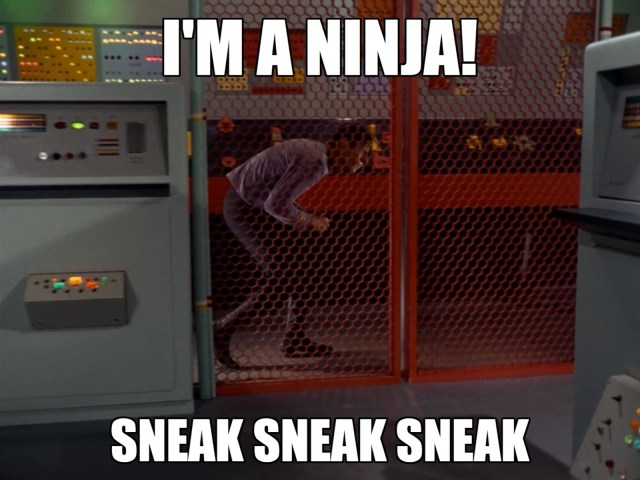 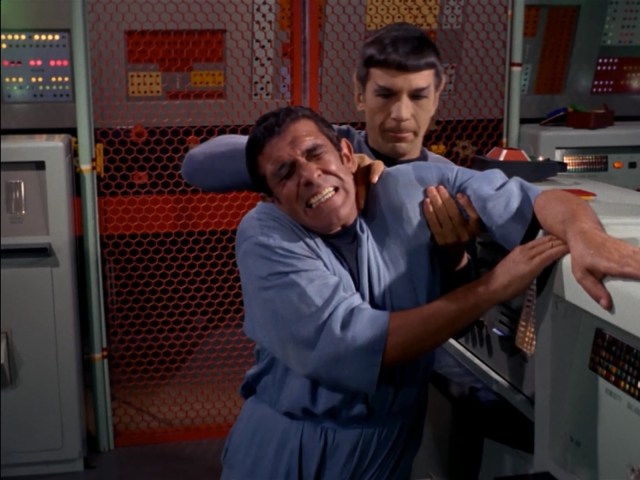 You don’t want a massage from Spock.

Rogue Spock starts shoving floppy disks into various machines, then he sends orders to the Enterprise using a computerized version of Kirk’s voice. Spock tells the crew that they will be completing an ultra secret mission, and their destination coordinates will be kept secret. The computer will be in charge of flying the Enterprise there. Spock, are you sure you wanna give helm responsibilities to the computer? That didn’t work out so well in 2001: A Space Odyssey… 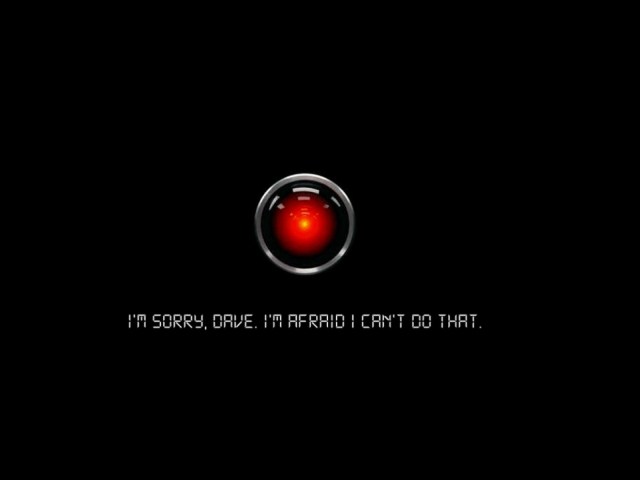 Mendez, Bones, and Kirk are still trying to figure out why someone would try to sabotage the Enterprise. Mendez uses his l33t officer clearance to dig up the file on Talos IV. It states that NO ONE is allowed to visit this planet, and violators will receive the death penalty. No details of the planet, Pike’s mission, or the inhabitants are included within this file (probably because of all the awkward kinks and horses and green lady fantasies). 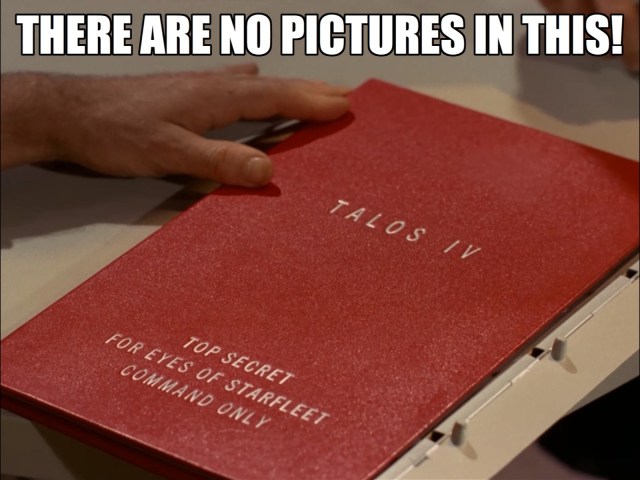 I thought this was gonna be a racy read.

An Enterprise crewmember calls down to Bones, insisting that he must help due to a medical emergency. This reason is very flimsy — no one can seem to tell Bones what kind of emergency it is. Bones is super annoyed, and he beams back up.

Once Kirk and Mendez are alone, they hear an announcement saying that the Enterprise is leaving Starbase 11! Whoa, Kirk! Your ship just got stolen from right under your nose! 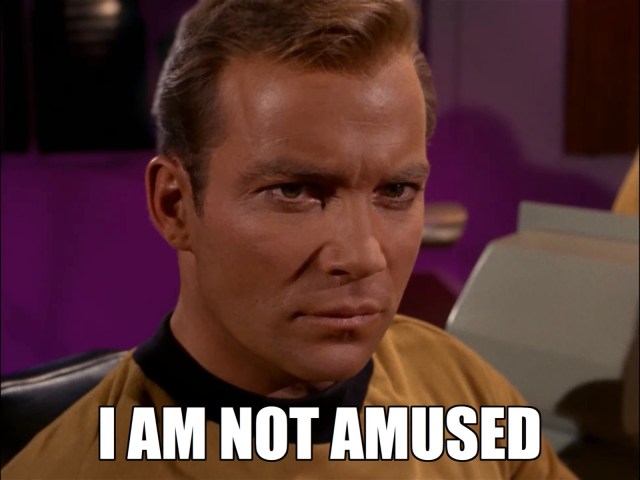 Okay, while Spock clearly has a talent for espionage, I have to say that his behavior points out several extreme flaws regarding the Enterprise’s security protocols.

2. Uhura blindly accepted Fake Kirk’s verbal instructions, without first confirming his identity. I mean, with so many ways to impersonate someone’s voice (like Ruk did in “What Are Little Girls Made Of?”), you’d think there would be some better identification procedures. Especially since the Captain is relinquishing power over his entire vessel without actually being present!

Don’t worry, there are more awk security issues down the road. 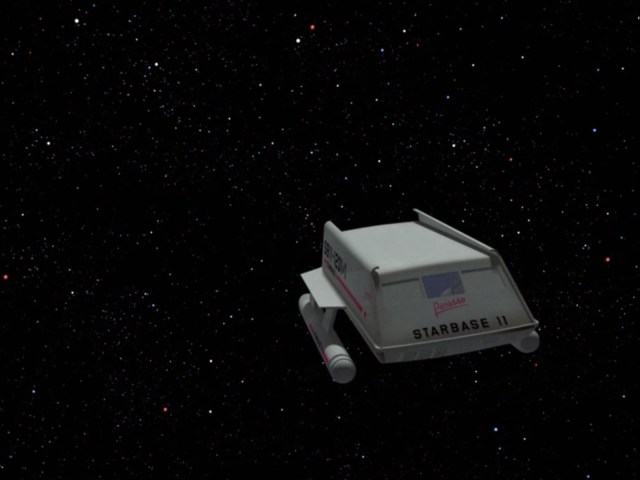 Kirk is following his true love, even if it means death.

Of course, Kirk jumps on the next shuttle outta Starbase 11. It happens to be an old, rickety milk carton, with very little gas and just two more hours of oxygen. For some reason, Mendez felt compelled to accompany Kirk on his suicide mission to chase the Enterprise.

Spock orders Uhura to ignore all incoming communications. And DING! That’s the next major security flaw:

3. When someone begs you to ignore the communicator, it’s time to get suspicious.

No one seems tough enough to call Spock out. But wait, here’s Bones, and he’s pissed. He demands to know if the Captain is struggling along in that milk carton! Just because boyfriends fight doesn’t mean they can put each other at risk!

Luckily, Spock discovers Kirk’s dire situation, locks onto the shuttle with a tractor beam, then zaps Kirk aboard.

Surprisingly, Spock comes clean and explains that he should be arrested for mutiny. You could hear a pin drop — everyone is shocked. Spock is so suave during this scene — telling Bones exactly how to confine him and what to charge him with. I can’t help but feel like this is all part of Spock’s plan… 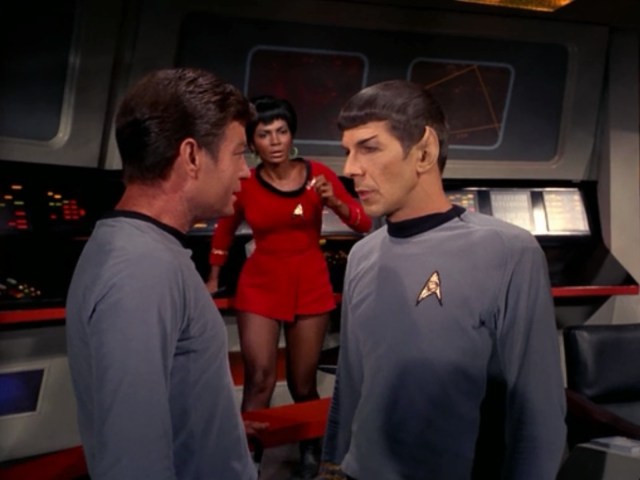 You’re right, Doc. I’ve been bad. Go tie me up in sickbay.

Everyone gets all dressed up to have a formal trial regarding Spock’s actions and behaviors. It’s almost certain that he will be removed from his post in Starfleet, humiliated, and imprisoned. Spock might even be killed if he visits Talos IV. 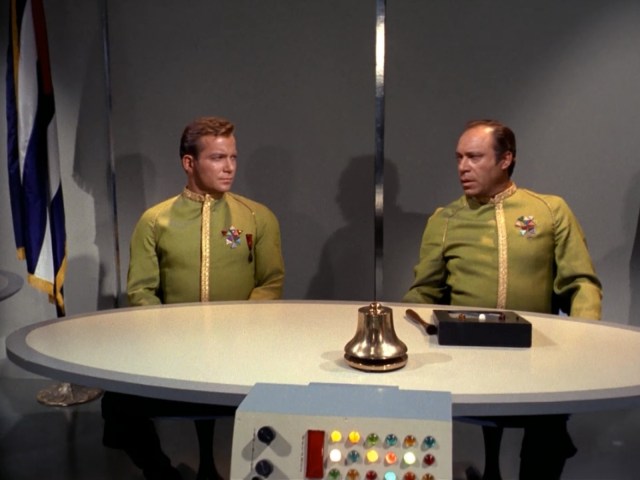 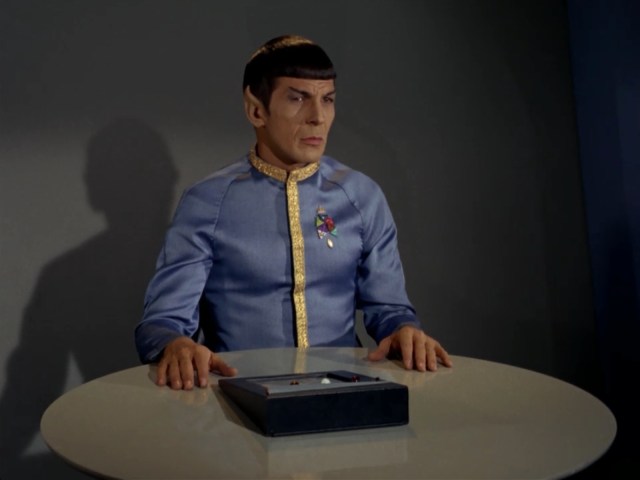 Why do their suits look like puked-up green pea baby food? And Spock just gets to look regal?

They need three officers for the trial and Spock points out Captain Pike, who has been moved onto the Enterprise. Mendez goes on ableist spiel about how Pike is a total “invalid” who won’t be able to complete his tasks. But since they never removed Pike’s active officer ranking, he can serve on the trial board.

Spock wishes to explain his actions with some footage of events that took place thirteen years ago. The lights dim, the monitor turns on…and footage of “The Cage” begins playing!

This scene feels super meta, and I couldn’t help but think about Mystery Science Theatre 3000. Will the Enterprise crew start cracking corny and obscure jokes? 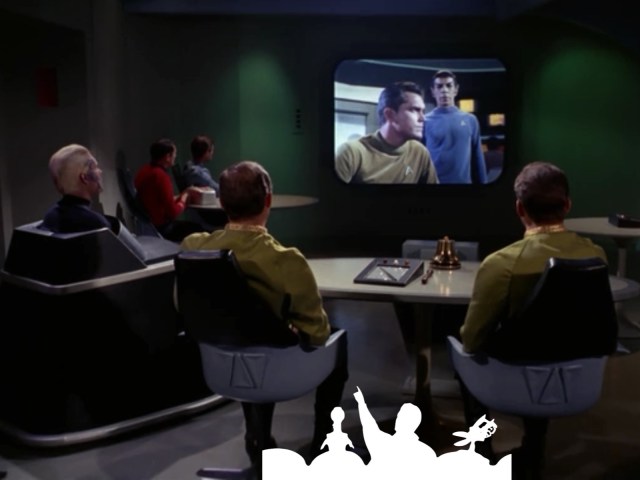 Watch out for snakes!

The footage is identical to the scenes from “The Cave.” Quick refresher: Planet with quivering blue flowers, Kirk is seduced, Talosians with giant brains kidnap him for their species breeding zoo.

Mendez objects to this footage. The quality is way too high to be a Starfleet video log, so it’s gotta be a fake, like a celebrity sex tape. Pike flashes his lights, insisting that no, it’s not a fake.

Starfleet contacts the Enterprise, saying that they’ve detected illegal communications from the planet Talos IV, and that BOOM, Captain Kirk has been fired from his leadership duties. “What, what?!” I’m yelling at the TV.

You know all that mysterious high quality video footage? Turns out it was streaming from Talos IV. They’ve got some great bandwidth out there! 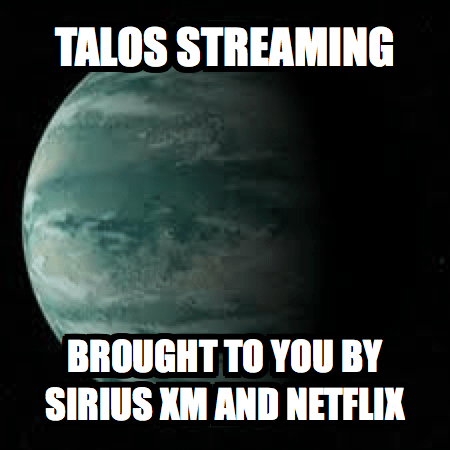 Mendez is infuriated, and demands that Spock turn the ship around. To our shock and amazement, Spock replies, “I respectfully decline,” thus subjecting himself to the FREAKING DEATH PENALTY. Ahhhh.

Kirk tries to override the computer’s control over the helm, but Spock found a way to make this irreversible. This leads us to the next Security Fail:

4. You should be able to override the computer, especially when it’s controlling an entire Starfleet vessel. Right, HAL? 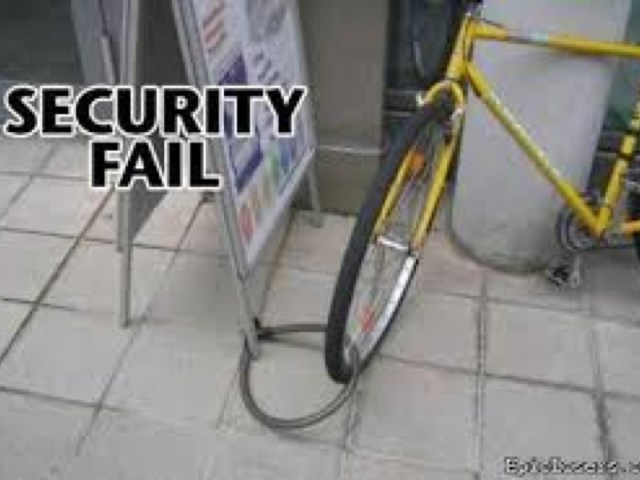 It’s like we can hear the sound of Kirk’s mind breaking. He just lost his career, his best friend will be executed, his ship has been hijacked, and they’re on course to a forbidden planet! 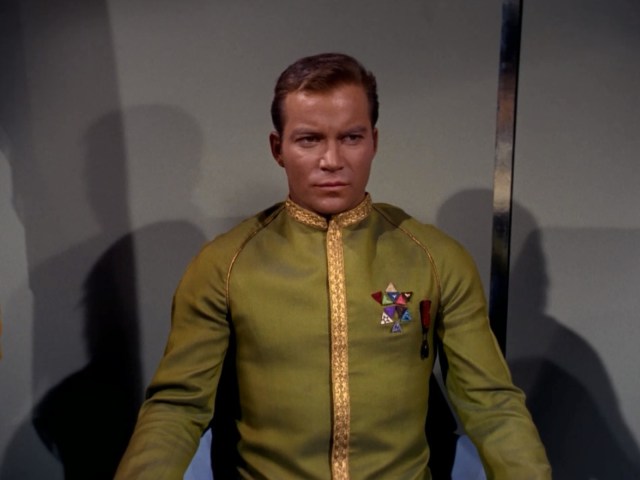 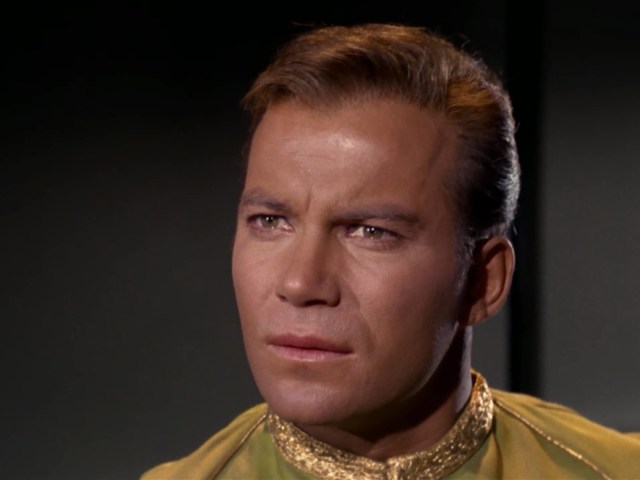 These are the many faces of a betrayed Captain Kirk.

This is the first time we’ve seen a two-part story line, so you know what that means?

That’s right, we’re gonna have to wait ’til next episode!

I loved this episode for so many reasons, including:

– It revealed Spock as a truly terrifying potential adversary. We knew he was smart, but look how much control he can exert in just a few short hours.
– It addresses everyone’s feelings of loyalty and betrayal. Poor Kirk.
– I have a feeling their security policy will get an update once this is all over.

Stay tuned to find out WTF Spock is thinking NEXT WEEK!