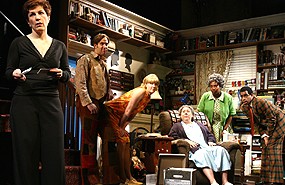 Kron is a certified lesbian playwriting champion. She’s got Obies and Guggenheims and Glaad awards a’plenty, is a member of the “Five Lesbian Brothers,” a 1989-founded theater group that aims to “create provocative lesbian theater for the masses” and is featured in my favorite anthology ever The New Fuck You, telling the story of her trip to Auschwitz, which was also the subject of her play “2.5 Minute Ride.” Well used physical illnesses as a metaphor for social illnesses and explored Lisa’s mother Ann’s experiences with social activism and illness. Though the play was critically championed and won many awards, it enjoyed only a brief run on Broadway.

Intern Lola: Bad Girls – The Musical (9/12/07 – 11/17/07 @ London’s West End) loosely follows the first series of ITV’s Bad Girls. Helen Stewart is the new Wing Governor at Larkhall women’s prison, where her idealism and genuine concern for the prisoners clashes with Jim Fenner, a sleazy prison officer whose actions lead to the death of an inmate. Helen takes a particular interest in Nikki Wade, an inmate serving a life sentence for killing the policeman who raped her then-girlfriend.
Fighting together against the institution’s corruption, Helen and Nikki fall in love. They share the music numbers “Every Night” (in which they struggle with their mutual attraction) and “This Is My Life” (before which they kiss, and promise to continue their relationship). 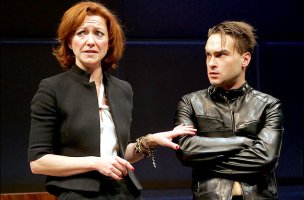 “Lean, mean, brash, crass and about as deep as a shot glass, Diane the Hollywood agent is just the tonic New York theatergoers need in the gray depths of an urban winter. Played by Julie White in an irresistible adrenaline rush of a performance, Diane can be thought of as the wicked witch or the fairy godmother of “The Little Dog Laughed” .. either way, she’s certainly more of a pick-me-up than your average jukebox musical.” (The New York Times)

Power Hollywood Agent Diane’s lesbianism was mentioned only briefly in this unfortunately short-lived Broadway play by Douglass Carter Beane, which also starred Darlene’s boyfriend from Roseanne and the cutie from That Thing You Do!. In fact; my BFF Haviland (who took me to the premiere way back when) didn’t even remember her being gay.

And … as much as we want to see more lesbian action, it’s nice to have a gay lady on stage who isn’t even remotely defined by her sexuality (although she’s obsessed with her client’s “slight recurring case of homosexuality” and convinced it will ruin his career, that’s the plot) — because generally stories about lesbians are relationship stories as it’s hard to find another way to introduce sexuality than by having sex.  Julie White rocks my world.

Julie White snagged a  Tony Award for Best Performance by a Leading Actress in a Play for her performance.

4. Martha in The Children’s Hour, by Lillian Hellman (Broadway 1934) 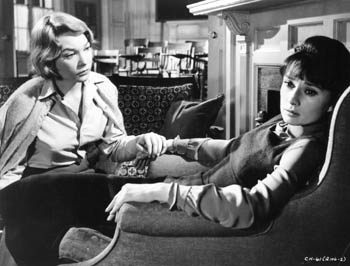 Hellman is a name you ought to know, and The Children’s Hour is a play (and later, a movie) that now stands as a shining example of a really fucking depressing lesbian story. Nevertheless it ran for nearly 700 performances and was based on a true story from an 1810 Scotland scandal in which an entire boarding school was abandoned when a petulant child accused two women of having an affair in front of their pupils. Though the women won their case, the damage done to their lives was irreparable. In the play, Martha is the actual Lezzie and her bestie seems to lack the neccessary Sapphic inclinations, which makes their sticky situation even stickier.

Intern Heidi: Hellman was a smoker, a drinker, a lover, and a fighter, associated with the start of the feminist movement for her work standing against unjust government while pursuing a successful artistic career as a woman. In 1950 she was blacklisted for her political beliefs and wrote a lot of books. She died at age 79 after publishing many books and pursuing a successful teaching career at Harvard and Yale. She sounds like a lady that wanted to make an impact and speak her mind and wasn’t afraid of the consequences.

What it Did for Queer Girls: Made us want to kill ourselves.

Marga Gomez is one of the first openly gay comedians ever and she’s written seven solo shows. Gomez’s one woman show Los Big Names interweaves a tribute to her Latino showbiz parents with her own Hollywood dreams.

What it Did For Queer Girls: I’m gonna give this one to Gomez – “For all the goofy, wacky stuff in it, the show is a celebration of the creative spirit. That’s what gave my parents the greatest happiness, and what gives the people we know in the downtown queer culture scene—in the biz called show—a reason to keep pushing on when you see half-wits getting all the money on TV. That’s what the show is about—the performers.” 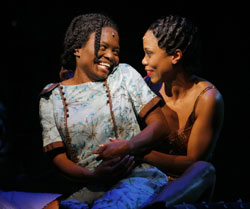 The Color Purple was the first hit Broadway musical to feature a lesbian character as its romantic lead. Steven Spielberg’s 1988 movie version of the Alice Walker book muted the affair between Celie and Shug, but twenty years later, the play’s book writer Marsha Norman reflects: “Every time I see the show, I’m still shocked that the audience goes with us. I still have the same reaction I did at that first preview in Atlanta, Georgia: ‘They’re going for this. They’re not going to get up and leave.'”

What it did for Queer Girls: Showed that we can take the risks now that Spielberg wasn’t willing to, and Oprah will finance it. 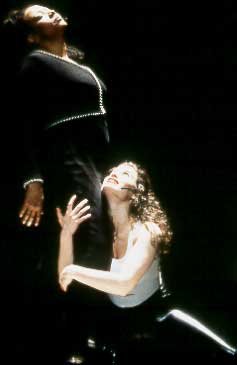 Intern Katrina: A bisexual performance artist whose gorgeous looks and reputation for infidelity warrant an entire tango. A sassy lesbian lawyer whose drive for success need for organization simultaneously support her lover and drive her crazy.

No. Maureen and Joanne, Rent’s infamously dichotomous and always-bickering girl-on-girl couple, originally played by Idina Menzel and Fredi Walker.  If ever there was not only the perfect lesbian break-up song, but the perfect lesbian break-up-at-our-commitment-ceremony-in-front-of-your-ex-boyfriend-and-his-parents song, “Take Me or Leave Me” would be it. The duet between the two ladies is their last-straw argument about Maureen just being too damn hot and Joanne being a little too neurotic. The conclusion they reach? “Women, what is it about them? Can’t live with them or without them! But oh yeah, they end up together, so don’t worry too much about it.

What it did for Queer Girls: Idina Menzel. Also, a song to sing to each other. Also, due to its incredible popularity, brought the idea of a modern lesbian relationship amongst attractive young people to the lonely lezzies in the Midwest and elsewhere.

Perhaps you have only seen the movie. Here’s a press reel from the original Maureen & Joanne: