DINAH SHORE
We’ll have lots more to tell you about this over the next month, but there is gonna be a kickass Battle of the Lesbian Webseries happening at Dinah Shore, and obvs Team Autostraddle will be participating:

One More Lesbian, silver sponsor of The Dinah 2010, will be hosting the first annual Battle Of The Lesbian Web Series on April 4th, 4:30PM – 5:30PM at The Hilton Palm Springs. Come cheer for your favorite web series as they face-off in this fierce and hilarious competition!! Comedienne Suzanne Westenhoefer and Sirius/XM Radio host Doria Biddle will MC. 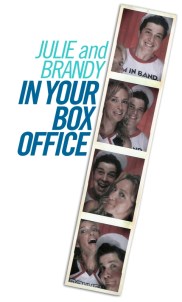 Contestants include The Lovers & Friends Show, Autostraddle’s Julie & Brandy in Your Box Office & Autonatic, Anyone But Me, Girltrash, Cherry Bomb, FEED and Seeking Simone.

MTV:
MTV shows that you “don’t have to be a dude to be a douchebag” with its latest episode of “Is She Really Going Out With Him?” featuring Ana and her girlfriend, Sin, who is a total douchebag. It’s sort of the most amazing thing we’ve seen all week, maybe we would like shows like this if they were always insane lesbians. Also Ana should be a calendar girl. (@mtv)

I thought it was interesting how you compared this story line to Meredith Baxter’s recent coming-out — she was very specific that she’d never ruled it out, it just wasn’t something that had ever occurred to her. Is that kind of the way we’re going to see things play out with Katherine?
Yeah, I think it’s going to take her by surprise, the feelings she’s having. I think that she’s still so emotionally vulnerable from getting out of the loony bin [laughs], and I think she and Robin [Benz] connect on a kind of wounded, emotional level. And I think if anything, she’s feeling this kind of emotional solace with her, and that draws her to Robin in a physical way, and that’s confusing to her. 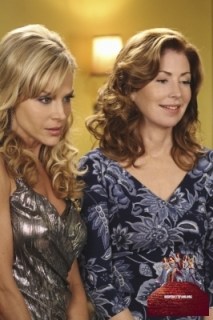 And I just have to put it out there — if you’re going to play gay, Julie Benz is a pretty hot way to kick things off.
Oh, my God. Well, and not only is she gorgeous, she’s a really good actress. I think people get so lost in her looks that they don’t realize how good she is.

QUEER AND ASIAN:
Sm{art]: The Visibility Project aims to reflect the strength, emotion, passion, and diversity that exists within the Queer Asian American community. (@bitch)

DADT:
“It’s going to be an interesting week on the Hill as we’ll hear from the various military service chiefs as lawmakers question them about whether it’s time to repeal DADT — or doing so is somehow too disruptive.” (@pamshouseblend)

ADAM LAMBERT:
Adam Lambert and Ke$ha made out or something. We feel slightly hurt b/c we thought if he was gonna be with a lady, it would be with us. This means we will have to try to make out with Ke$ha at Dinah Shore to get second-hand Glambert kisses: “She’s really pretty and we were laughing and we just started kissing,” he said on air. “It was pretty innocent to be honest with you. I mean, it wasn’t too dirty.” Obvs it was just playing you guys, he is still gay! Okay? He’s still gay. Thanks. (@nydailynews)

MODELING:
CBS News did a bit called “Too Young to Model?” Doutzen Kros is among those interviewed about the decreasing age & body weight of models these days.

SKINS: Skins promo for Episode 405 (Freddie) and more pics from 405 & 406 and Crystal & Riese have recapped Episode 404 (Katie) and it’s pretty awesome! Also you can read synopsis of all the upcoming episodes here.

ELTON:
Have you heard about this thing yet where Elton John said Jesus was gay? We discussed it in our music fix. Yeah, that happened. Unsurprisingly, conservative Christians and church leaders are all upset now, insisting that “Jesus was celibate or “sexually ascetic” and suggesting that this is a “desperate cry for attention” on Elton’s part. Um, obvs they do not know that he is Godfather of the gay mafia and will cut off their gym memberships.

Now he has responded to the criticism and said that “I think everybody’s individual faith is their own business.” (@celebritychannel)

TILA:
Tila Tequila threw a gig in Australia and nobody came… Matt Gilbertson at the Adelaide Daily said, “When Tila arrived in Adelaide on her budget JetStar flight, she was flanked by an entourage of five men, doubtless to shield her from a gaggle of fans. Unfortunately no one seemed to know, or care, about her at the airport.” (@adelaide daily)

WESTBORO:
Sometimes the world is a scary place because things like the Westboro Baptist Church exist. Sometimes, though, we are reminded of how outdated and irrelevant things like the WBC are becoming, and the world gets a little brighter, because sometimes over 3,000 high school students band together for a massive counterprotest against like 20 WBC members. Let’s all hug/cry a little! (@queerty)

GAGA:
Really, we probably should have seen this coming, but it’s still awesome. Lady Gaga is teaming up with fashion designer Jeremy Scott to “keep your little monsters safe” with a line of “fashionable condoms.” “It’s not complicated, just a fashion statement,” Gaga said in a press release. “Everybody wrap it up with Jeremy Scott for Proper Attire condoms.” Remember, ladies, use condoms on your sex toys so they can be shared safely! Bisexuals and allies, stock the f*ck up! (@theadvocate)

Also! Also, Simon Cowell has been quoted as saying he’d like Lady Gaga to participate in this season of American Idol because she’s “the most relevant pop artist in the world.” Hilariously, he says immediately afterwards that he “would love to find a Taylor Swift. Somebody who’s relevant rather than a contest winner.” Hahaha ok! (@ohnotheydidnt)

BLACK HISTORY MONTH:
Afterellen has gone ahead and profiled two incredible Black women artists and activists, Staceyann Chin and Wanda Sykes. Go on, head over there and get inspired. (@afterellen)

GAYS:
In news that is sure to thrill some and rile others, former HBO Vice President Sam Martin is adapting a U.S. version of one of the iconic gay couples of international TV. Who will play Christian and Olli? (@afterelton)

LINDSAY:
Lindsay is in England, up in the club sippin’ that bub, and was apparently witnessed “hopping into a chauffeured car with a mystery male friend.” Whatevs. More importantly, her hair is black now and apparently she is doing really well with her recovery program! “…back in the States she is making good progress in her DUI program, according to Judge Marsha Revel. During a progress hearing earlier this week, Revel announced that Lohan has been in full compliance with the court and said she’s pleased with her results. Go girl go! Maybe wear some colors in the future, though? You look nice in colors. (@ohnotheydidnt)

SHATNER:
Do you follow @shitmydadsays on twitter? No? It’s okay, I’ll wait. Now, did you know it’s becoming a TV pilot? Starring William Shatner? His qualifications for the part are “spoken word interpretations of Sarah Palin’s farewell address and her best-selling book.” (@hollywoodreporter)