I am writing today in response to your latest inquiry regarding my thoughts and opinions on one Kristen Stewart. I understand that it is highly unusual to respond at such length via a comment on a Facebook status, but I believe my reasons will become apparent as I, the great Sherlock Homo, attempt to unravel the question posed within your status: “Kristen Stewart Dating Alicia Cargile? ‘Twilight’ Star Reportedly Has A New Girlfriend.”

I was initially shocked that you would ask such a seemingly inane question on a public forum but upon further investigation discovered that you were actually linking to an article by the same name from the International Business Times, undoubtedly a reputable source of information to International Businessmen. While it is child’s play to determine that this and other articles like it are garbage clickbait, let us assume for a moment that the journalistic integrity of these news organizations is intact. After all, what’s more integral to the well-being and general health of our culture than celebrity gossip based on purported same-sex tendencies?

So. What are the details of this case? According to the source you linked, Watson, famed film star Kristen Stewart has recently terminated her romantic involvement with Robert Pattinson (also a famed film star). While Mr. Pattinson appears to now be involved with famed music star Katy Perry, Ms Stewart’s romantic entanglements are more opaque. Anonymous sources have indicated to several sources that Ms Stewart is dating Alicia Cargile, who is described as “a Los Angeles-based visual effects producer.” Personal details on Ms Cargile are few and far between, as MStarz faithfully reports that “Cargile’s Instagram is currently private.” According to a Celebitchy report on a Star Magazine report:

Sources say a romance began after Alicia comforted Kristen following her devastating split from Rob last May. The pair have dropped hints of their own by frequently stepping out on different occasions wearing the same clothes.

I am of two minds regarding this: The first questions the veracity of any publication that would report on a maybe-romantic entanglement that maybe started nearly a year ago. But the second says that “wearing the same clothes” is an intriguing note that, when coupled with publications’ continued insistence that “gal-pal” is a synonym for “girlfriend,” makes me raise my eyebrows nevertheless.

Much has been speculated regarding the sexuality of Ms Stewart, which has in some cases has taken on an air of self-evident truth. Not entirely unfounded, perhaps, based on her willingness (and apparent eagerness) to talk about having crushes on women. (Ms Stewart has named Natalie Portman as her first crush and expressed a desire to make out with Charlize Theron and wear boxer-briefs, among other noted declarations of same-sex affection.) Also: The Runaways.

Buzzfeed, a noted source of information regarding things only 22-year-olds understand, cites the tumblrs Team Gay Stew, Gay Stew Is Gay, and Hey Girl it’s KStew as evidence of a deeply entrenched belief and dedication to the very idea that Ms Stewart could one day participate in a same-sex relationship through which we may all live vicariously. The evidence offered within these articles and Tumblrs hardly seems peer-reviewed; on the contrary, most of it seems like someone pretty much just made it up. For example, key paragraphs in the International Business Times piece note:

“Love is love to Kristen,” a source revealed to the tabloid about the film star’s “hot and heavy” new affair, adding that Stewart is happy again one year after her split from her “Twilight” co-star, Pattinson. “She’s really happy with Alicia,” said an insider.”

Stewart was seen “dirty dancing” with Cargile while partying at Korakia Pensione hotel in Palm Springs, Calif., on Feb. 23. “She put her arms around Kristen’s neck and Kristen put her hands on her waist,” an eyewitness told the gossip site. “After about 30 seconds, Kristen started laughing, kissed Alicia right on the lips then rested her head on Alicia’s chest and hugged her tight. It was totally hot,” added the source.

Certainly evidence doesn’t get more rock-solid than that, Watson. “Totally hot.” It’s right there in the cold, hard ink of the internet. Another often-cited proof of Ms Stewart’s queerness is her overall aesthetic and demeanor. Calibrate your gaydar to Exhibit A: 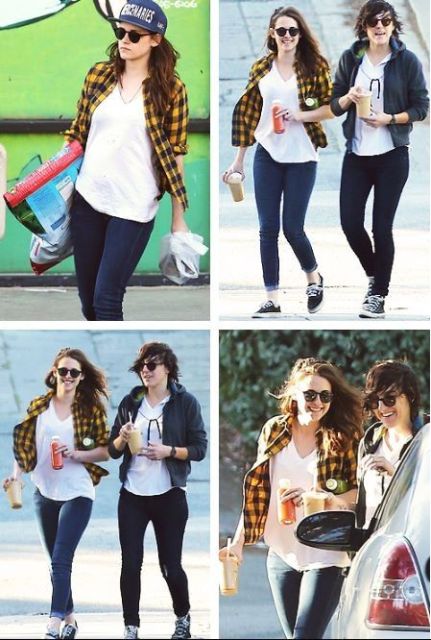 I would invite you to imagine a universe, Watson, wherein it is physically possible for humans with opposite sex attractions to wear flannel and gay-ass sneakers and shop at Whole Foods. As far-fetched as this thought experiment seems, my investigations into the matter have stunningly proven that this is, in fact, the universe in which our collective realities reside. My experiments have also unfortunately proven beyond measure that the old adage “miracles happen when you believe” is patently false; in other words, just because you want something to be true does not make it true. (Unless we’re talking about Ellen Page, which is a totally different ballgame that doesn’t operate using standard physics.)

Now, as you and I have learned from our previous escapades, Ms Stewart also recently participated in a photo shoot for Wildfang and this photo shoot was helmed by noted homosexual Lindsey Byrnes, who you will remember is also noted for her relationship with noted homosexual Tegan Quin. No doubt Wildfang models comprise a significant portion of the elite “cliterati” population, as former charges include soccer player Megan Rapinoe, famous Shane portrayer Katherine Moennig and queer teen heartthrobs Evan Rachel Wood and Ellen Page. 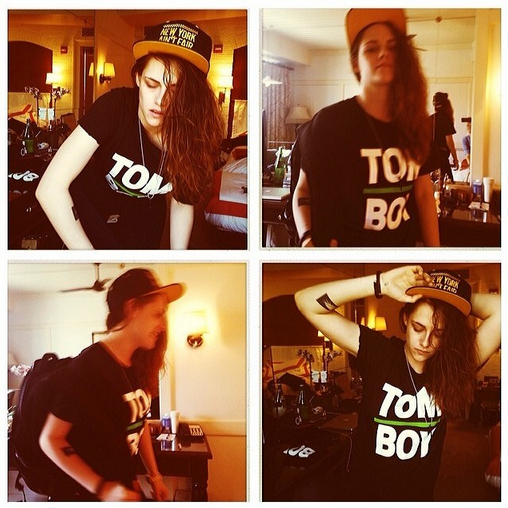 When these facts are coupled with the knowledge of Stewart’s friendly relationship with noted homosexual Jodie Foster, it seems like a foregone conclusion that Ms Stewart is in some way connected to the lesbian mafia at large. And while I would never purport that these conclusions are necessarily incorrect, it would be mocking both science and queerness in general to use what is essentially conjecture as hard evidence. Rest assured that my network of gay moles is hard at work to determine the legitimacy of these claims.

In conclusion, while there is clearly evidence to support all sides of this conversation, the fact remains that common decency and basic tact preclude us from drawing any sorts of real deductions. Even I, the great Sherlock Homo, know that. In an age where celebrity privacy seems to be a punchline rather than a priority, I can hardly support this type of research with any real enthusiasm. The truth is, as they say, out there, but I for one am electing to wait until, if ever, this information can be substantiated by a primary source. Let me know if a murder crops up anywhere in the periphery of this story, though, I guess.

PS- Are we still on for brunch at The Abbey on Sunday?