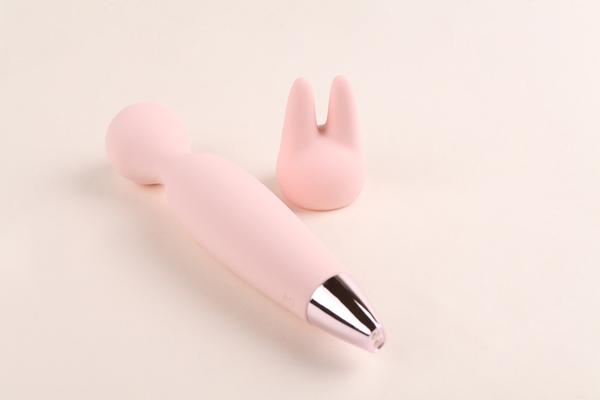 The Gazelle stands out as a small wand with two options for heads: an easy-to-remove one with two flexible nubs for targeted sensation, and beneath that a smooth sphere. Overall, the toy is a little rumblier on lower settings and a little buzzier on higher ones; regardless of the setting, the nubs are a little buzzier and the sphere is a little rumblier. I like the option to easily switch between sensations during play, but it has a drawback: in the shower, I found the horns moved around as the toy vibrated – while it’s nice that the detachable head is loose enough to easily take on and off dry, that means that once water (and lube) got between the toy and the attachment it doesn’t stay in place.

The taxonomy and classification of different (animal) gazelles is muddled, and so is the Gazelle. Wand? Dildo? Both and neither, maybe at the same time? It almost seems like penetration was considered and not totally rejected, but also not thought through. The head without the attachment is a good size for it and shaped in a way that my g-spot could appreciate, the neck is flexible, the toy is (just) long enough and the whole thing vibrates; at the same time, the control button is close to the head, the shaft narrows out in a way that just isn’t fun to clench around and the shiny plastic end is super slippery when covered in lube. I would have liked either a more functional penetrative toy — with better shape and button placement — or a stronger embrace of the wand — with a more powerful head and a shaft that doesn’t vibrate.

Not using the app has a secret upside: though the toy’s estimated battery life is 45 minutes, mine has lasted two hours on a charge, though it gets less powerful as it got closer to death.

Fully charged, the Gazelle feels mid-range powerful: definitely better than a solid bullet, but nowhere near a Magic Wand. I’m a Magic Wand kind of girl, and the Gazelle starts as “this is going to make me come” and, towards the end of its battery life, ends up as “where is a different sex toy.” My orgasms with it are satisfying (totally unlike with some toys I could mention), but not especially remarkable. On the other hand: the Magic Wand is far too powerful for a lot of people. If you’re one of them, like playing with apps, like a lot of vibration settings, or are into Millennial pink, the Gazelle could be the right toy for you.