It is fifteen goddamn degrees outside. Fifteen degrees Fahrenheit! Fifteen. Degrees. Going out with friends or my wife or just, like, leaving my apartment at all? Out of the question! Nope nope nope! This month, folks came to me instead of freezing our butts off in a cold bar somewhere and I made them Cardamom-Orange Martinis. Which seems like a weird choice, but I promise it’s not.

I will tell you, though, that I’ve used two pretty special ingredients for this one, ones that you might not already have lying around your kitchen. Here they are— 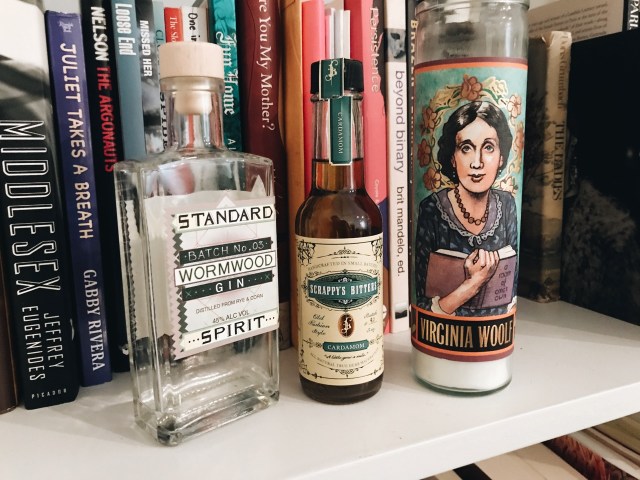 Virginia Woolf candle not required, I am who I am.

The first is gin from Standard Wormwood Distillery in Brooklyn. My wife and I ran into them in December at the Bust Craftacular and as soon as we sampled their wares, I had the idea for this cocktail. This particular distillery uses wormwood in most (all?) of their products — and before you think this drink is gonna make you see some green fairies, I’d like to give you one of my most popular fun facts! Though maligned and banned in this country for a good long while, wormwood (one of the herbal tastes in absinthe) is not and has never been hallucinogenic. The wine industry just did not like how popular absinthe was getting, so they spread some rumors mean-girls-style. If you drink and you enjoy alcohol, alcohol with wormwood listed as an ingredient isn’t going to behave much differently than what you’re used to. Anyhow, what I’m saying is you COULD make this drink with your favorite gin. But I made this cocktail SPECIFICALLY for this gin. So if you have the means, I highly recommend giving this one a try. It’s gentle, herbaceous and tastes like someone’s witch-aesthetic Tumblr distilled (I mean that extremely positively).

The second is Scrappy’s Bitters in Cardamom. Our own Dr. Lizz got these for us (thank you Lizz!). They don’t come out super frequently, but when I have a drink that calls for them (like this one!) there’s no substitute. They taste like warmth, even when you’re using them in a drink with ice. Perfect for January.

So now for the complete list. You will need: 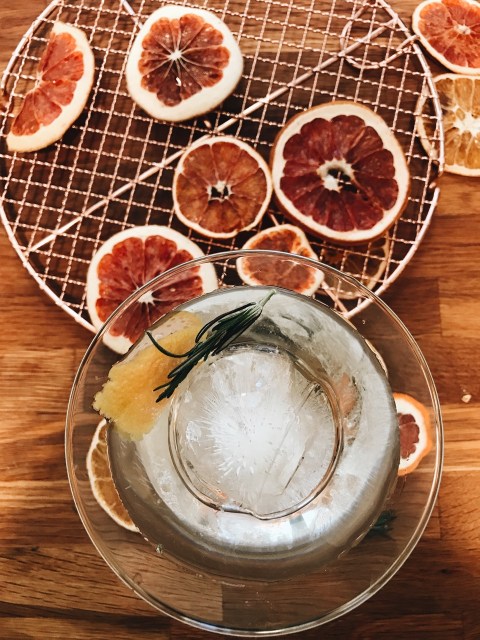 See, we dried a bunch of citruses to make garlands and it was entirely too much citrus, like we just didn’t need that much garland, but now I just have a really pretty butcher block? Oh, no, drying citrus has nothing to do with this recipe but gosh darn, doesn’t that make a pretty photo.

In your mixing glass, dump the gin and the Vermouth over ice. Add a dash of the orange bitters and the cardamom bitters. Stir quickly, putting your bar spoon between the ice and the glass and trying not to knock it around too much. You may notice that I have no photos of the middle bit this time — turns out when your drink is clear and your light is low, mixing this looks like nothing on camera. 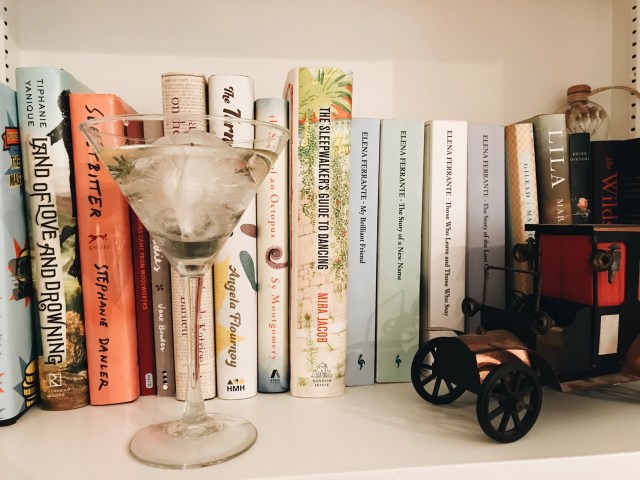 See what I mean? Clear drinks are super hard to photograph. Tastes real good, though!

Strain into a martini glass with a big ole ice cube in it. Peel a bit of the orange peel and spritz into the drink with it. Rub it against the edges of the glass and throw it right on in there. Grab a sprig of rosemary and chuck that on in there too. LOOK HOW MUCH YOU DON’T HATE WINTER! IT’S AESTHETIC! YOU CAN PRETEND THE TREES AREN’T STICKS AND YOUR EYES AREN’T FREEZING TO THE INSIDE OF YOUR EYELIDS!

Join A+
Related:alcoholliquor in the