Last week in this column I wrote about Gabby Rivera’s terrific America comic book, so this week I’m writing about its sister series, Kelly Thompson and Leonardo Romero’s Hawkeye. Unlike other comics under this name, this time the series focuses on Kate Bishop Hawkeye, not Clint Barton Hawkguy. This means we get a tonal and moral shift — one focused on women and girlhood and feminism. And it means we get a kickass, fun and thoughtful comic about one of the best young superheroes in the Marvel Universe. 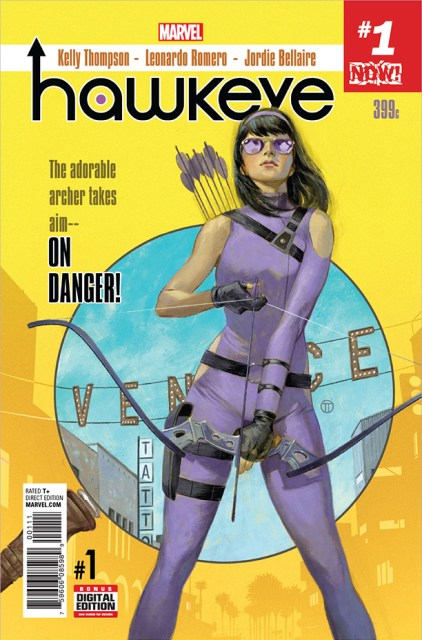 In the first trade of this series, we see Kate Bishop as she sets up Hawkeye Investigations, a PI firm inspired by Jessica Jones’ Alias Investigations, in LA. She starts out investigating this dudebro named Brad, of course, but quickly is hired by a local college student who’s being stalked and online harassed by a creeper. As is a common theme in many of the books I read, Kate finds a new chosen family out on the West Coast full of people who become new touchstones in her life. There’s the lesbian surf shop owner and her hot brother, the college computer expert, and the queer girl who hired her about the stalking. All the while she’s fighting a supervillain who literally gets his power from hate and anger and patriarchal entitlement, who gets stronger the more creepers and harassers and stalkers and misogynists there are. It’s a perfect social justice warrior superhero story. 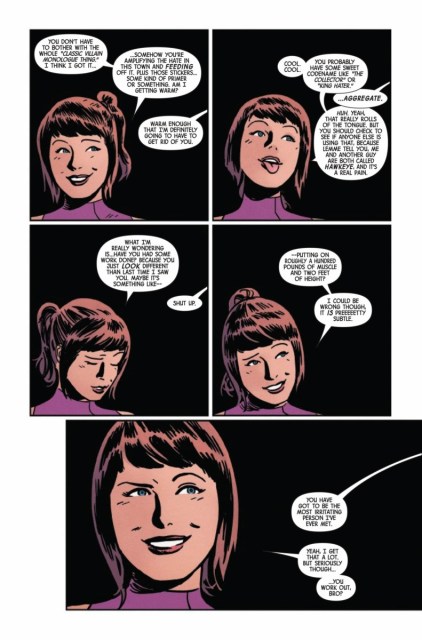 I love the comic book version of Clint Barton; the Fraction/Aja run on Hawkeye was one of the best comics I’ve ever read. But even then, one of my favorite parts was everything that Kate Bishop did. There’s a lot about this book that picks up directly where the Fraction/Aja Hawkeye left off. It’s an action comedy full of lovable dirtbags, rogues and one-eyed dogs. Its main character is low on money and high on bruises and cuts. She narrates her own story, filling it with wit and sass and resentment that people are always looking for the other Hawkeye. But what this run does differently is hugely important in a time like ours: this comic takes on the patriarchy head on. Kate herself is vocally feminist, and because of Thompson’s writing, the entire plot and universe of the book definitely has a feminist agenda. The art, by Leonardo Romero and Michael Walsh — with colors by the inimitable Jordie Bellaire — definitely harkens back to that series, but does so with a softer, more humorous touch. This series isn’t a gritty as that one, and I like that about it. 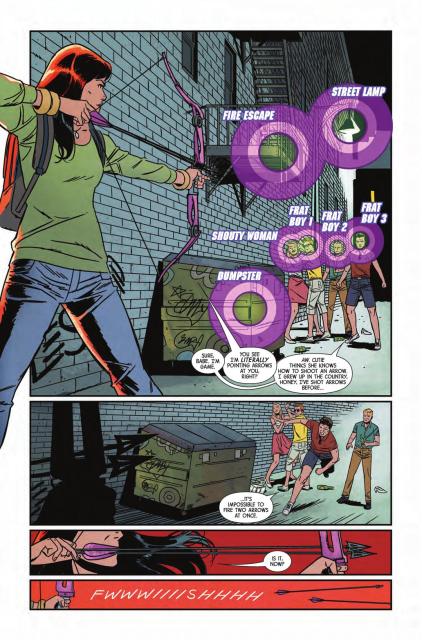 Another thing I love about Hawkeye is its setting. While nearly all of the Marvel Universe takes place in New York, Kate has moved out to Los Angeles, Venice Beach specifically, and so it feels like she’s out in her own world. While some other familiar Marvel names come up (Clint Barton and America Chavez, of course), and Jessica Jones stops by for a visit, the comic is very much separated from all of the Kree and Skrull alien invasions, Asgardian gods and mutant/avenger wars of the larger Marvel Universe. It makes the book so much more accessible than the majority of superhero comics, and you could easily pick this book up and not have to worry about knowing about the rest of superherodom.

If you’re the type of reader who likes superheroes, but doesn’t really care about what all the ten million straight, cis, white male superheroes are doing, I can’t think of a better pair of comics than America and Hawkeye. Not only is the story and dialogue sharp and clever with a strong bite, but it’s also perfect for feminists who like to have fun with their agenda.

Giant Days: Not on the Test Edition Vol 2 HC