The speech is only roughly two minutes, but I held my breath the entire time. So often in the last few months, as feminists and women, it has felt like the pop culture we engage in is finally starting to engage with us back — and on the issues that matter most. But it’s hard not to notice how many of the chosen faces of the #MeToo movement have not reflected women of color. When the movement grew into the Time’s Up Initiative, designed in part as a legal fund to help counter sexual assault, harassment, and inequality in workplace, I delighted in seeing so many women of color at the forefront. This moment is the culmination of those efforts, six black women using one of the most watched nights in black Hollywood — a community celebration largely free from a white gaze — to declare that “TIME’S UP on our silence. TIME’S UP on the abuse of power, TIME’S UP on apathy”.

It wasn’t lost on the participants, or the NAACP, that the Image Awards were hosted on Martin Luther King day. Recognizing and valuing black women for their historical and ongoing leading efforts in the fight for racial and gender equality is a perfect way to honor King’s legacy. But, more than that, I was struck by the selected ambassadors of the occasion. With Angela Robinson, Lena Waithe, and Laverne Cox donning the stage, three of the six women represented were out queer and trans black women. In the middle of this already big moment, these three women broke another glass ceiling. We were seen, in the full beauty and range of who we are.

On her Instagram, Laverne Cox wrote, “This was my first time on the NAACP Image Awards stage. That moment meant so very much to me and for so many people watching.” She’s absolutely right. 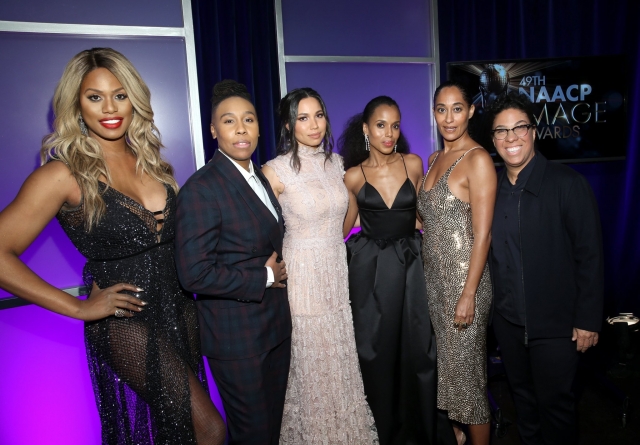 Like a lot of black kids, I watched the NAACP Image awards every year growing up. It was then, and remains now, one of the few events that can steadily be counted on to showcase black talent. Watching their speech last night, I couldn’t help but wonder how my life could’ve changed if I had seen Lena Waithe or Angela Robinson or Laverne Cox back then. If I could have seen my mom laugh at Lena’s well-timed joke about the importance of voting, or if I had been given the opportunity swoon over the femme goddess Laverne’s gown. If I had known that I could use my nerdy writing skills to reach their full sci-fi potential like Angela. If I hadn’t been socialized to think of queerness as exclusively white. Would have found myself sooner? Sometimes I worry that it’s becoming cliché to say that “representation matters”, but wow it’s still so important. And wow, did these women represent last night.

Carmen has written 497 articles for us.