This week, one of our anonymous reviewers tried out the Pipedream Ceramix No. 10, sent to us by Bondara. 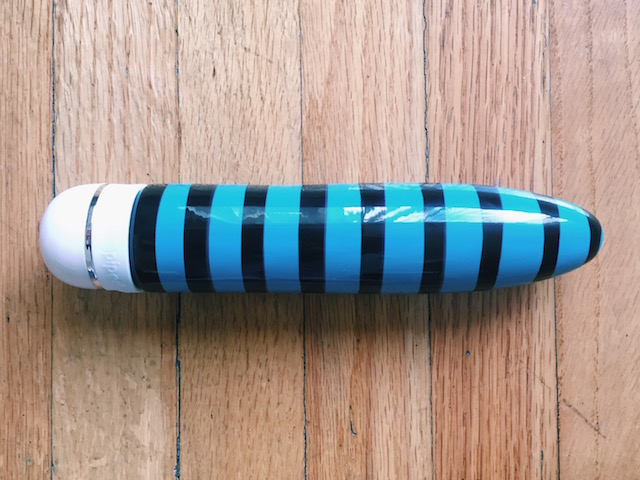 The batteries fit into a base, which then screws into the body of the toy. I found that if I moved with any enthusiasm the toy would turn itself off until I adjusted.

Despite the heavy ceramic body, the vibrations were both buzzy and weak; a combination that is death for sex toys for me. If my clit noticed the toy at all it was to feel sort of annoyed by it. (If you do like buzzy, surface-level vibrations, and wish the toys that delivered them felt more substantial to hold, the Ceramix might be a good solution for you.) There are three power levels of vibration, followed by three patterns I would describe as “annoying.” Really turned on, on the highest setting, and jamming the toy into my clit, it took forever to come, by which I mean that as of this writing I am still waiting to orgasm from this toy. For me, the highest setting was not nearly high enough. (It was loud enough to sound like it would be, though.)

I was excited to try out the toy internally; I love glass and metal toys, and really anything that can retain a temperature hotter or cooler than my body heat, and was hoping ceramic would behave similarly. However, while the back of the package notes the Cermix is “super versatile and perfect for external or internal use,” the flap notes, “the vibrator […] is recommended for external use only.” I tried it anyway, for science. I appreciated the girth and length, and how unlike many textures of silicone toys the ceramic didn’t require me to keep adding additional lube, but it was overall unremarkable. The ceramic also didn’t retain heat or cold to the same extent that glass or metal do, and seemed to settle on “just about lukewarm and not cold enough to be interesting.”

Also, in addition to this toy being pretty shitty, Pipedream is a shitty company.

Out of the box, I wanted to like this toy. It’s ceramic, and I love an interesting material; it feels substantial to hold; and it looks like a goth bumblebee. That is literally all it has going for it. But I tried it out a few times for science/this review, and unless there’s a prolonged power outage and the batteries last, I’m not going to use it again (possibly not even then). Do not buy.

Guest has written 177 articles for us.