Wow Happy Monday here I am at A-Camp Pre-Camp doing this thing later than I was supposed to do it! This week we have a special treat for you: A CELEBRITY GUEST. Our very own Brittani Nichols joined me and substitute co-host Carly Usdin in the studio (aka: my bedroom) to discuss the episode in which Jenny’s college roommate comes to town to check out the tool shed and spy on Marina and her girlfriend who has two Fs in her last name. Also, Bette and Tina meet Yolanda at Dan Foxworthy’s Bananas Support Group For Distressed Future Parents, Dana tries coming out to her parents who were on Battlestar while Alice plays with a banana, and we finally experience the life-changing magic that is TWAT THE NIGHT.

+ Brittani Nichols
+ Carly Usdin
+ Carly’s comic book: Carly Usdin’s “Avant-Guards” Is the Women’s Basketball Comic Book You’ve Been Waiting for Since Before You Knew You Were Gay
+ The show Brittani is writing for: A Black Lady Sketch Show Reveals a Cast Ready to Make You Laugh
+ Read about Suicide Kale and watch it
+ All 91 Actors Who Were In Both “The L Word” and “Battlestar Galactica”
+ The OG recaps with lots of Carly appearances
+ Brittani’s Story of No
+ Listling With Minimal Commentary: How We Watched The L Word In Secret
+ A picture of us all watching The L Word a million years ago, featuring Carly’s puppet: 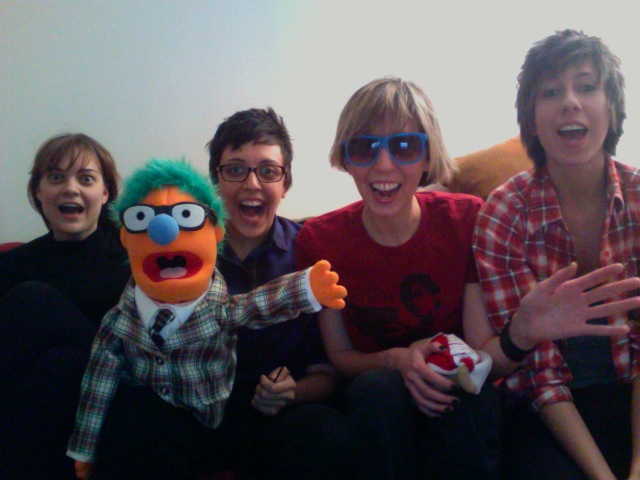 99% of our readers don’t financially support or are not A+ members. But if everyone who saw this popup today gave just $1.29, we’d be at our goal! We’re almost there! Will you help us out?