On Sunday I took communion for the first time in more than a year. I hadn’t been avoiding it deliberately, but I realized just how long it had been as I approached the line to receive bread and wine (juice). I’ve heard the phrases “The body of Christ broken for you;” “The blood of Christ shed for you” hundreds of times in my life. But this time it felt different.

I was bleary eyed, having stayed up way too late talking and singing pop songs with a group of rad queer women. I was wearing a Mary Lambert crop top that read “EVERYONE IS A BABE” and my Topman boxers poked out over my jeans. But being sleepy and underdressed didn’t make this communion particularly special — I spent six years in a youth group, after all.

The miracle, the revelation, came in dunking my bread in the wine and whispering “thanks be to God” in a room full of queer people.

In Houston, 1,450 of us gathered for the annual Gay Christian Network Conference this weekend. As I chewed my bread and walked back down the aisle for my seat, I made eye contact with 50-year-old bears and 18-year-old dykes and middle-aged moms and elderly pastors. We saw each other and lifted each other up in prayer.

The event has grown a lot since 2005, when 40 people gathered in Dallas. This was the GCN’s best attended and most diverse conference ever in terms of age, race, and country and state of origin. Folks came from Catholic and Mainline Protestant, from progressive and contemporary non-denominational, and from very conservative and evangelical faith traditions.

The keynote speakers were Broderick Greer, an Episcopal Curate and prominent advocate for the Black Lives Matter movement, Misty Irons, a blogger and theologian from a more conservative tradition and Side B position (more on that later), and Allyson Robertson, likely the first trans woman ever ordained by a Baptist church. The workshops and panel discussions reflected the diversity of participants in their theology and perspectives. 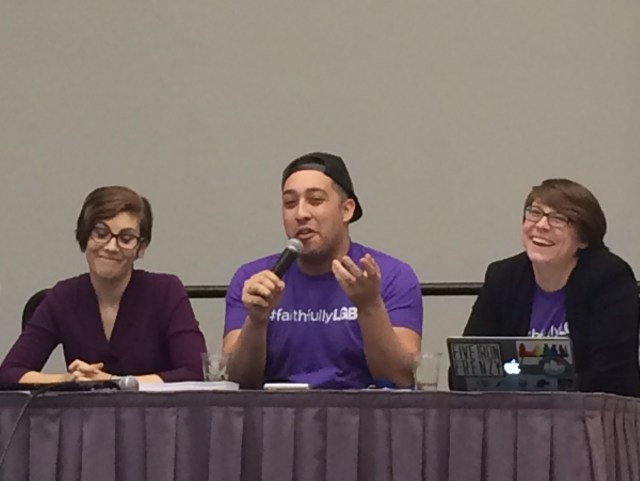 Samantha Field, Eliel Cruz-Lopez and Sarah Moon shared strategies for how churches and Christians can and must be more inclusive of bisexuals.

Awe-inspiring things — I’ll  call them sacred things — happen when marginalized people get together and speak frankly about their oppression and liberation. In the first breakout workshop I went to, Emmy Kegler invited the audience to reflect on where we saw ourselves in scripture. We named people who act on their faith despite facing discrimination, like the woman with the issue of the blood in Mark and the good Samaritan, a member of a marginalized tribe who stops to help a stranger of a different tribe. I realized that the stories that resonate with me most and that most actively demonstrate the radical root of my Christian faith are those in which oppressed individuals form partnerships and communities from which to leverage their collective voices for their liberation.

Ruth and Naomi cling to each other for survival and find a way to thrive (that story is often also interpreted as queer, but that’s a theological query for another time). Mary seeks Elizabeth’s counsel when both women are pregnant against impossible odds and the Holy Spirit comes to them. The 12 disciples are a ragtag band of poor, uneducated folks with no authority, and Jesus chooses them each for their gifts to help lead his cultural and spiritual revolution.

After I had this moment of understanding about the Bible as the story of oppressed people working together to free themselves and their communities, I saw that gospel in action all weekend. There were many parents of LGBT kids who made it a point to hug as many queer folks as possible, and I saw people who haven’t spoken to their own parents in years bond with adults who had traveled down the road of learning to embrace their children. GCN welcomes both Side A (people who believe LGBT Christians can enter into same-sex marriages and relationships) and Side B (LGBT people and allies who believe scripture requires them to not engage in same-sex relationships) Christians, and they met together at tables and on couches and in worship with the goal of understanding and loving each other.

After a workshop on bisexuality and the church that got me thinking seriously about seminary, I crossed the street to the park with two new friends. We talked about the struggles of being bisexual in predominately lesbian communities and about how to engage with our faith while in secular queer spaces in ways that don’t harm people who have left the church because it was violent to them. We’re already working on a workshop pitch for next year’s conference. And in the midst of this conversation, we played on magnificent spinning machines at the park and laughed like wild things. There is liberation in being joyful while protestors with “Homo Sex Is Sin” posters congregate just around the corner in a city that two months ago voted to repeal its non-discrimination ordinance. 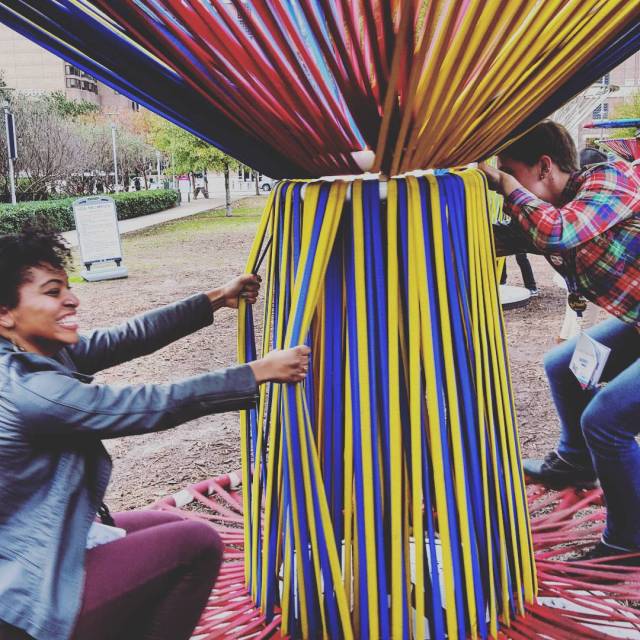 The conference was intentional about honoring everyone’s stories and lifting up voices that don’t usually get heard in faith spaces or queer spaces. Almost all of the keynote speakers addressed racism in the LGBT community, our responsibility to stand with the Black Lives Matter movement, and the ways that cis queers can work in solidarity with trans folks. The conference designated all-gender restrooms for the first time. People were willing and determined to learn and grow not just for their personal benefit but to be better members of the community. I put “they/she” on a pronoun button for the first time and countless people — moms, older gay and lesbian folks, and my peers — asked me to share what that meant and what genderqueer identity is because they genuinely wanted to understand ideas that were foreign and difficult for them so they could love me better.

I met another genderqueer person from North Texas who wore a dress for the first time at the conference and we shared our stories. I also formed a bright friendship with someone who comes from a charismatic worship style and extremely conservative faith background, and we hugged every time we saw each other. For the first time, I saw how big the table of Christ can really be. I could be my whole self — my complicated, queer, heretical, Presbyterian self — and people told me that self was a blessing to them. As Emmy said in that first workshop, “This is why we do church: Because we need each other and each other’s stories.” And then the next day in the bisexuality workshop, seminary student Sarah Moon took it a step further in noting, “In Genesis 1 when God creates the world, they do it by speaking words,” so when we tell our stories we become co-creators with God.

Throughout the conference, speakers and my peers called on us to work together across the divides we felt so we could leverage our faith as a tool for radical and transformative justice. It seemed miraculous that we were able to reach and teach each other in so many ways, despite major differences in theologies and backgrounds. Queer people and Christians both speak a lot about radical love as the key to lifting folks out of the darkness. This weekend surrounded by people who hold both those identities, we lived that out in a way that felt totally new to me. 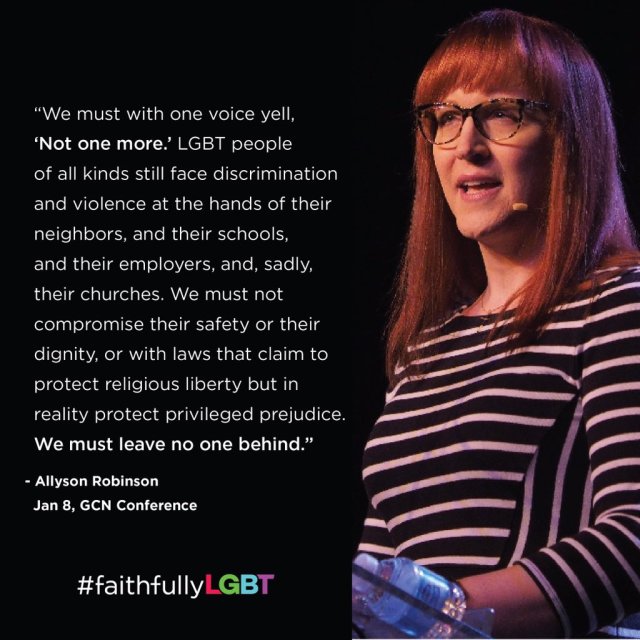 I’m thankful for the tables at the mall food court where I had conversations about faith with strangers. I’m thankful for the cocktail table that five new friends and I carried through a three-hour line to meet Mary Lambert after her concert while occasionally chanting DYKES DYKES DYKES at full volume. Fact: Mary Lambert, who has always spoken candidly about her faith and sexuality, genuinely wants to know about your life and it’s too beautiful for words. 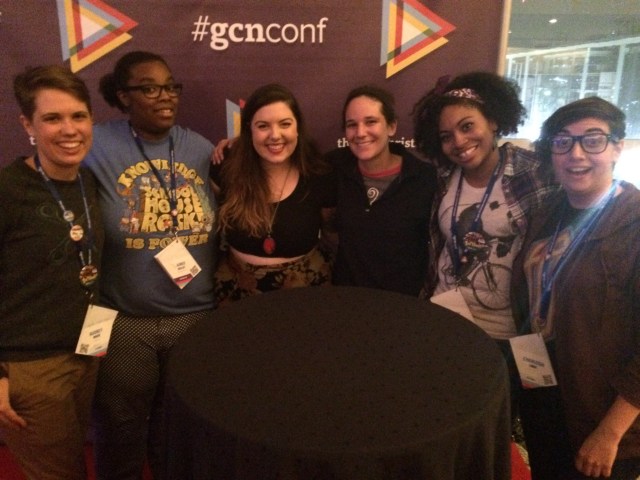 But most of all, I’m thankful for the table we shared during communion. In his final keynote, GCN founder Justin Lee explained that even the progressive church has failed so many people because it is sympathetic, not empathetic. It feels sorry for those people over there but does nothing to stand with them in their struggles. It wants all to feel welcome but does nothing to heal the wounds of those who have been excluded. For the first time in a long time, I shared communion at a table that emphatically and empathetically made room for me, crop top and all. For some people, it was the first time they ever took communion in a worship space where anyone knew they were queer. A server said “This is the body of Christ broken for you” knowing the heart of who they were speaking to.

The theme of this conference was “What’s next,” and I’m still processing my own answer to that question. I have a broken and complicated faith, but I won’t go another year without communion. And every time I break the bread, I’ll remember the 1,450 people with whom I shared that bread and all the love, hope and struggle bound up in it.